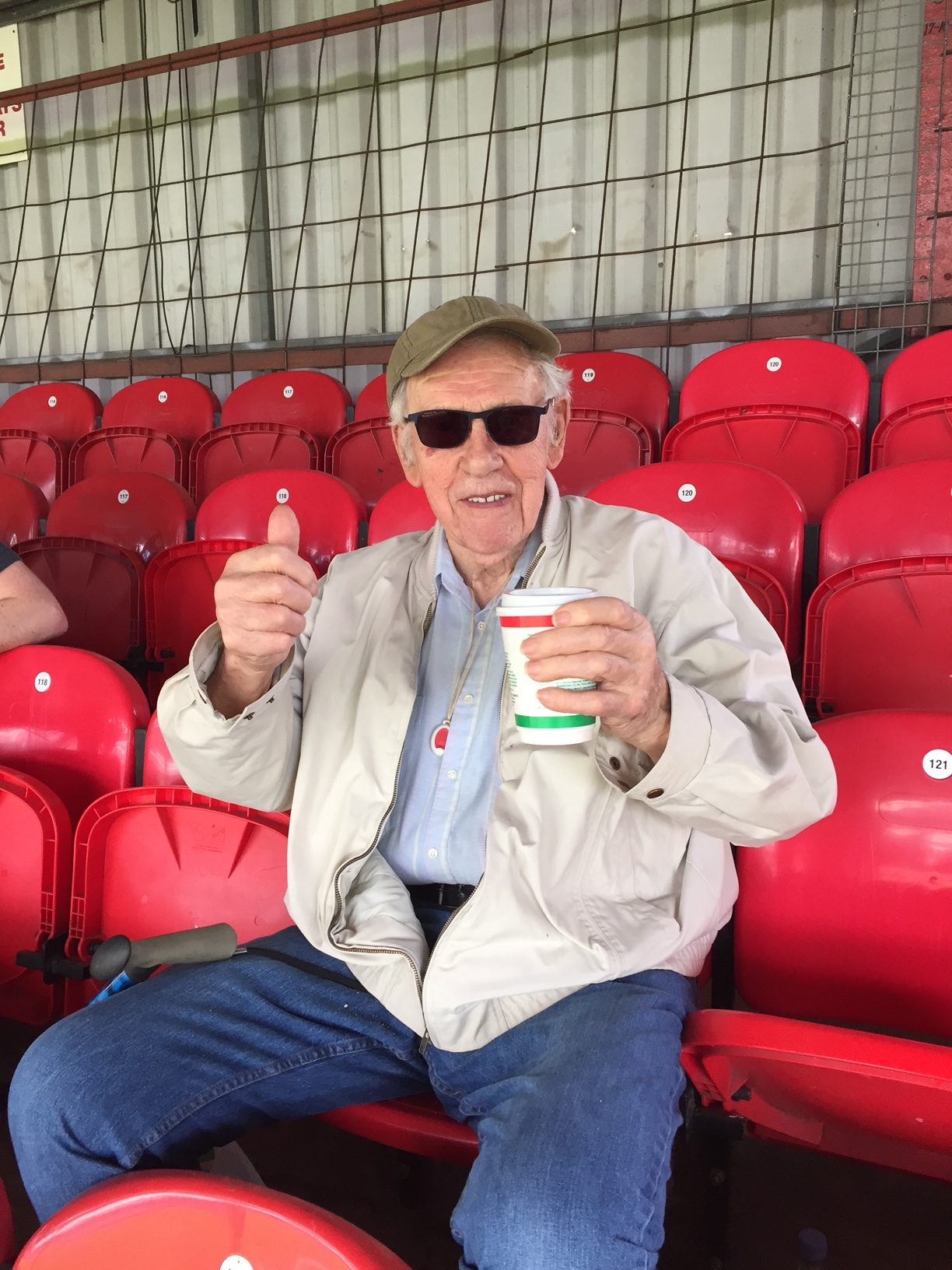 ALBERT WAS AT A BEES SEMI NEARLY 80 YEARS AGO

You've probably heard about Brentford's old glory days in the 1940s, Albert French can go one better,he was there at all of them.
Share |
more

He was at Wembley in 1942 when Brentford won the London War Cup in front of 70,000 fans, he was in the record crowd of 38,678 at Griffin Park for the FA cup 6th round tie v Leicester City in 1949, on the special train to Blackburn in 1989 when 3,000 travelled north for a 5th round FA Cup game, at  the promotion clinchers at Peterborough in 1992 and Cambridge in 1999,  and at Griffin Park against Preston when we won promotion to the Championship in 2014.  Albert French is truly living Brentford history.

And perhaps what’s most relevant at the moment is that he watched a Cup semi–final which Brentford not only played in but won. The Carabao Cup semi-final next month will be our first ever ‘major’ semi  because nobody is claiming that the 1942 semi in the London War Cup was ‘major’ but it was the best available in wartime. Brentford met Arsenal at Stamford Bridge and there was a goalless draw.The replay was at White Hart Lane and Albert was there to see the Bees win 2-1. He remembers that it was a crowd of about 40,000, unsegregated and no need for social distancing then. Albert recalls that the game was very exciting with a great atmosphere, the view from
behind one of the goals was rather poor but he saw the Arsenal great Cliff Bastin playing.

Albert was  97 this December and we think that makes him the oldest season-ticket holder and BU member, just a little older than Ron Fishlock who we reported on last season. If you know of anybody who’s older do let us know. Albert was ten when he went to his first game at Griffin Park. It was Saturday March 17th 1934 and the Bees won one-nil against Blackpool. Harry Curtis was the manager, Ramsay MacDonald was Prime Minister of the UK and the next day Mussolini announced Italy’s ‘primacy’ across the world. Brentford’s own plan for world domination would also hit a snag later when the Bees lost a crucial game and ended up one point off promotion to the First Division. The next season they made it, maybe a precedent for this season?

Albert says ““The first games of mine were a real treat, great gems”, there were crowds of up to 30,000 and boys like him “were passed above people’s heads from the back to the front of the stands”. He lived in Hanwell and can remember when “all conversations over the garden fence were dominated by talk about Brentford”. These were the days when hunger marchers came down to London and “there wasn’t much money about”. He also remembers the open top trams which ran across West London and on match-days “it was absolutely pandemonium”.There would be many more match-days for Albert over the next nine decades. Perhaps the most extraordinary was the 1941-2 season at the height of the Second World War. “I was only about 16, but I travelled around everywhere, every match, home and away, north and south. I went to Wembley for the London War Cup Final, that was another great day. I can picture it as if it was yesterday. Leslie Smith was absolutely brilliant, Joe James held the cup and he nearly dropped it on the floor”.

Over the years there were many other great days like the cup victory at Blackburn that took the Bees to the sixth round of the FA Cup against Liverpool in 1989 and those promotion games at Cambridge and Peterborough. Albert’s son David went with him on many of these trips.  And there were the not so good days. Disappointments include numerous relegations, countless play-off failures, Freight Rover and LDV final defeats and Mr Raymond Biggar’s 9 minutes of added time against Notts County in 1993 that ultimately led to our relegation.

Albert and David French’s programme from the infamous 1993 match against Notts County.

David says; “One of the worst moments was at Gillingham in the FA Cup. We were 3-1 up with 11 minutes left and somehow lost 5-3. We drove all the way back home without saying a word to each other”.  And the Doncaster Rovers disaster of course, best summed up by a comment from an older supporter who told them as they left the ground “if you’ve been supporting Brentford for as long as I have, THAT’S what it’s all about!” 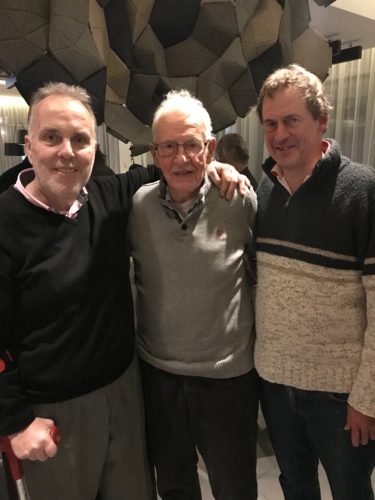 There are also weather memories on and off the pitch. Albert says; “Before the Clean Air Act there were matches in thick fog and on Boxing Day 1948 we were playing Plymouth and in the Royal Oak stand there were supporters with about 3 inches of snow on their heads”.  Also David remembers; ”we got soaked queueing in a long snake for tickets for the Liverpool cup game, we went to dry out in the Royal Oak where we met Gary Blissett and Andy Feeley having a leisurely post-match beer in the warm”.  A very early start ensured Albert survived another ticketing disaster in 2005 and with David he was at the “very entertaining Martin Allen inspired 2-2 draw at Southampton in the FA Cup 5th Round”.

Albert reckons he’s seen 49 of the 59 people in Brentford’s Hall of Fame. A small selection of his favourite players through the decades starts with what he thinks was Brentford’s greatest ever team in the 1930’s.  An early idol was Dai Hopkins, a Welsh international winger and lynchpin of that team.  Albert remembers being transfixed by seeing his skills in the flesh from close quarters in the New Road stand.  In 1942 Albert was called up and served in the RAF in North Africa and Italy before being de-mobbed in 1947, so there were a few missed years of watching the Bees.  Bill  Gorman (‘Baldy’), Billy Dare, and our half-back line of Ron Greenwood, Tony Harper, and Jimmy Hill (‘Chinny) sticks firmly in his mind from the late Forties and early Fifties.  The terrible twins Jim Towers and George Francis loomed large in the late Fifties and early Sixties.  Moving on – and with David now attending – John O’Mara & co. lit up the 1971/72 campaign followed a few years later by another great strike partnership of Andy McCulloch and Steve Phillips.  Chris Kamara, Terry Hurlock and Stan Bowles was another great and very characterful midfield in the 1980’s along with strikers Francis Joseph, Dean Holdsworth, Garry Blissett, Marcus Gayle, the ‘FT index’ Nicky Foster and Robert Taylor and Lloyd Owusu. He’s forgotten some of the details of DJ Campbell’s cup exploits against Sunderland in 2006 (he obviously got too excited) but he does remember Billy Grant playing several ‘Brentford themed’ numbers on an out of tune piano in a rocking Lord Nelson afterwards. The experience proved so overwhelming for a glory-hunter friend that he brought season tickets for his entire family for the following season.  Sadly he wasn’t seen much thereafter!”

Albert has seen Brentford teams under the stewardship of over 40 managers, starting with the legendary Harry Curtis during the 1930’s through to the manager of our greatest team in the modern era, Thomas Frank.  Apart from Harry Curtis, Albert’s favourites include Jackie Gibbons, Steve Perryman, ‘Mad Dog’ Martin Allen and Uwe Rosler.  Mark Warburton, Dean Smith and Thomas Frank are all recent favourites and he met Dean and Thomas as part of a 94th birthday treat organised by his late daughter Rosemary.

Albert thinks that Brentford teams since we’ve been back in the Championship are playing the best football he has ever seen, in fact so good it is largely unrecognisable from the offerings of the previous eighty years.  He loves watching all the current players and the pandemic has been a unexpected boon for him in that via iFollow he is watching more live Brentford action than ever before.  He has become a re-born Bees fanatic. 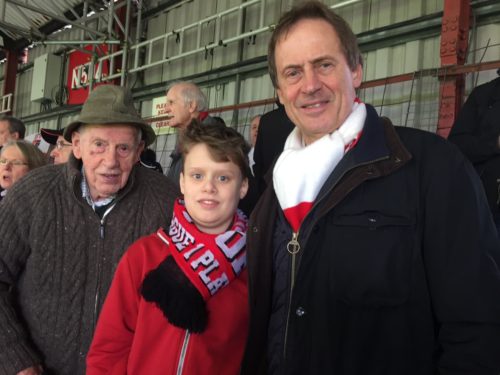 Albert,Stephen and David French -three generations of Bees fans. If you add in Albert’s late father Wiiliam, its a four generation Bees family.

In more recent times David French was at the Bees United meeting in 2009 when members voted in favour of the deal with Matthew Benham which became a turning point in the club’s history. David and his Dad are both season-ticket holders in the new stadium but only David has been able to go so far, being one of the 2,000 who attended the game against Blackburn. Albert’s heart condition makes getting to the games problematic. ”It’s difficult to explain my position, one minute I’m at death’s door, the next I’m not. It’s quite amazing what has been done medically. You name it, I’ve had it done. I always ask ‘is it worth it? Every time the doctors say ‘of course, of course’.

Albert is scheduled for an anti-COVID vaccine in the second week of January so here’s to the day when the virus has receded enough and Albert is well enough to go to the stadium. Perhaps it will be in time for the 90th anniversary of his first trip to Griffin Park. Certainly Bees United will do what it can to help make that happen. For Albert it will be another memory, he has been around so long that he says “‘I’ve seen stands go up and I’ve seen them go down”.