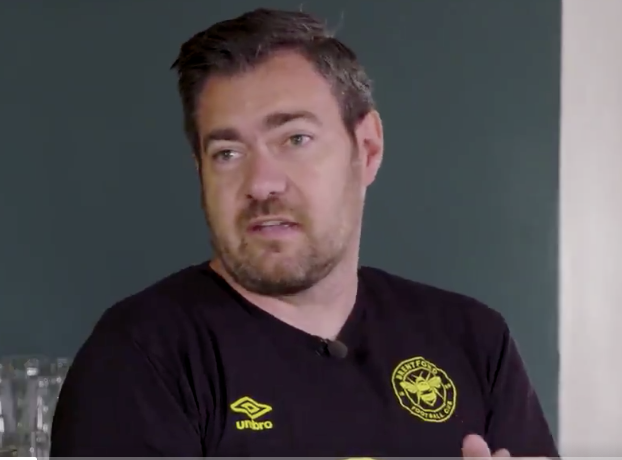 A DUTCH FAN SAYS A ‘MELANCHOLY’ FAREWELL TO GRIFFIN PARK

Sjoerd Mossou (right) is a Dutch football journalist and Bees fan. Before the Barnsley game he wrote his own 'melancholy' Farewell to Griffin Park for the Dutch news website AD.nl. He has kindly agreed we can translate and publish it.
Share |

My friend Dan Suh will be a father in a few months. Somewhat symbolic: the end of his carefree life coincides exactly with the end of Griffin Park, Brentford FC’s football stadium for 116 years.The stadium where we have visited dozens of times, on unforgettable Saturday afternoons in West London. Entering through the creaky red turnstiles, and then swarming over the tight circulation behind the stands, right along the back gardens of Ealing Road.

Dan, Perry, David and the rest were here countless more times than I was. Every week, for decades, they found a place in this charming, rickety little stadium, sandwiched between the model workers’ houses of Brentford, one of London’s least cosmopolitan neighbourhoods.They have walked all conceivable approach routes to Griffin Park, from the Thames in the south, or from the bus stop on Windmill Road (bus line E2). They know every crazy corner in the stadium, every crooked wave, every clumsy pillar ruining the view.

At the four pubs on the corner, which have gradually grown into a football cliché, they know every bar employee by first name. Especially in The Griffin, the neighbourhood pub with the longest history, and with the best burgers on top: freshly baked in the front garden on Saturdays.(True Brentford fans also know the “fifth pub”: The Royal Horseguardsman a little further on.) 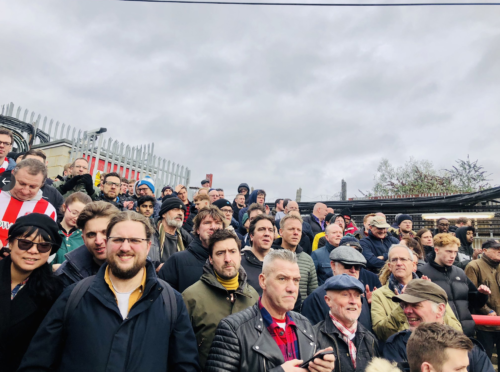 Can you be deeply in love with something as lifeless as a building or an old football stadium? Can you love a grandstand dearly? Can you cry about it? In the case of Dan, an emotional London Korean who speaks 24 hours a day, I’m pretty sure he’s going to start crying soon, not necessarily for the birth of his daughter.

Brentford will play its last league game against Barnsley tonight. What should have been an unforgettable farewell turns into a historic ghost duel on the borderline between glorious and deep sadness. Griffin Park also remains empty because of Covid-19. To camouflage the lack of audience, they have covered the stands with banners. It looks listless, sad.

And that while Brentford has the Premier League at their fingertips more than ever. Since football resumed football, it has set an unprecedented series of eight games in a row: the gap at promotion spot 2 – now owned by West Bromwich Albion – is only one point.

If it does not work directly through the competition, then it must be done via the play-offs. It’s been a sensational feat for a small West London club for decades, in the shadow of its much wealthier neighbours Chelsea, Fulham and Queens Park Rangers.

When I first got there nearly twenty years ago, Brentford was still anonymous in the depths of the third division. Love happened to bloom. The flat where I lived at the time was nearby. The Sunday morning soccer team I went into played with was just Brentford fans. The rest went without saying: one visit to Griffin Park and I was hooked for the rest of my life.

Football was not to be seen in those years, the money was always used up, you hardly saw football tourists. Brentford is a touchable, uncomplicated and very local club, untouched by the glamor and polish of English football. It is hard to imagine that this club now plays the best football of the Championship, leaving big clubs like Stoke City, Middlesbrough and Birmingham City behind.

The advance started a few years ago, but it is still getting used to Dan Suh and his friends. Sometimes they suddenly roar desperately for the ball to be old fashioned – bloody hell, hoof it, mate! – must go forward. Sometimes they still can’t believe that clubs like Sheffield Wednesday or Blackburn Rovers at Griffin Park are completely off the mat.

It also makes pride natural. Since supporter and data entrepreneur Matthew Benham took over the club in 2012, Brentford has grown into an exemplary club in England. Benham is a kind of youthful version of Frans van Seumeren: rich, smart, committed and a child of the neighbourhood. Many other English clubs, often in the hands of foreign investors with dubious motives, look at it with great jealousy.

Brentford is now widely known in England for its sophisticated scouting, data analysis and attractive way of playing. The club has made transfer profits of tens of millions of euros in recent years, often by buying unknown players with a scratch – and guiding them perfectly. Saïd Benrahma and Ollie Watkins are the next gems, playing in a team where the fun drips. Former Sparta player Halil Dervisoglu also achieved the same training plan. 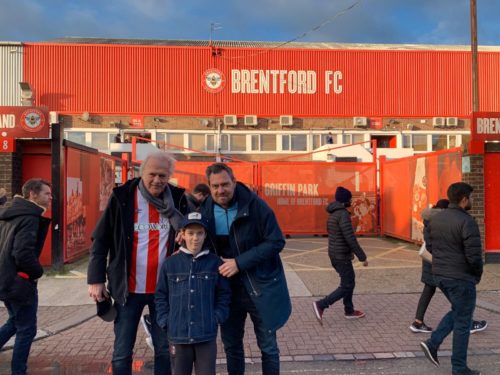 Sjoerd (right) with his father and son

Until corona, I saw Brentford play once every month this season, in a brave effort to end Griffin Park with a small, personal farewell tour. In January I went with my father and son. A week later with my soccer team. In February with former colleague Chris and friend Lucas.

The last months of the season should have reached the climax. In April I would go with my girlfriend, for the first time in seventeen years. Tickets for the farewell game against Barnsley (original date May 2) had also been secured for a while.

We mused endlessly about a festive field storm – and then a long drunken evening at The Griffin or The Princess Royal. Melancholically I always noticed the large announcement board in the corner of the stadium, on which the matches were counted down. I bought the special shirt with “Farewell Griffin Park 1904-2020” on it. I received a beautiful photo book from Dan: “The big book of Griffin Park”.

But then there was corona. The pandemic that at first seemed to run wild, but quickly paralysed all life, including football.

The new Brentford Community Stadium, about a mile to the east, is all set to go. From the M4 ring road you can see the shiny silver-coloured roof protruding above the houses. The stadium is beautiful, it is also nearby, in an area that is slightly more expensive and richer, on the border with the posh Kew district.

The architects have done their best to make it something special, the design is asymmetrical, the stands are compact and close to the field. Still, it feels mostly depressing and clinical. Economically, sporty, practical and marketing technically it would be fantastic to promote to the Premier League now, but from a sentimental point of view it is three times nothing.

For months I have been hoping for good news: that Brentford will play its cup games at Griffin Park next season, for example, as has often been suggested in supporter forums. Or that there will still be a real, great farewell match, say against neighbour Chelsea, and that Dan Suh can then take his newborn daughter with her: hooray for the circle of life.

But for the time being, everything points to an anti-climax. Three weeks ago an email came in about how you could get a “refund” for your purchased tickets. An inevitable message, but it hurt: it was now final. The farewell game against Barnsley was going to be played without an audience.

It is sad, even sad, especially for Dan and his friends. I especially feel like a glorified football tourist, a sympathiser. They are the real fans, for whom Griffin Park was the common thread in their lives, not a Dutchman who happened to come by. 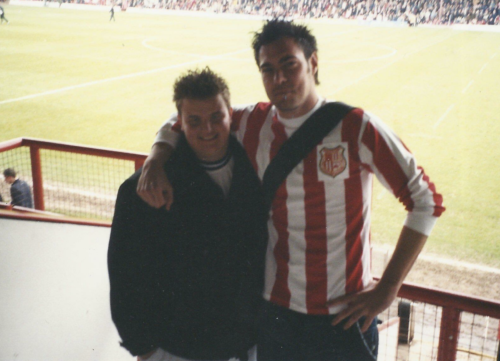 ‘Together with Perry in May 2004, when Brentford escaped relegation to the Third Division (4th level) on the last day of play’. Picture from Sjoerd Mossou.

Perry grew up overlooking the stadium. Paul worked for years at The Griffin’s bar. Dan has been closely involved in all kinds of supporter initiatives for years. We played football together on Sundays in Gunnersbury Park, a stone’s throw away. The Beesotted FC players all lived or lived nearby.

It may be minor suffering, in the broader perspective of the corona crisis, but a football stadium is not just any building. Griffin Park has been crying and laughing, enjoying and praying, cheering and singing for 116 years. A place that deserves to be expressed in a grand and compelling way. Even promotion to the Premier League would not mitigate that lack.

We first wrote about Sjoerd and his love of Brentford back in January. You can read that here