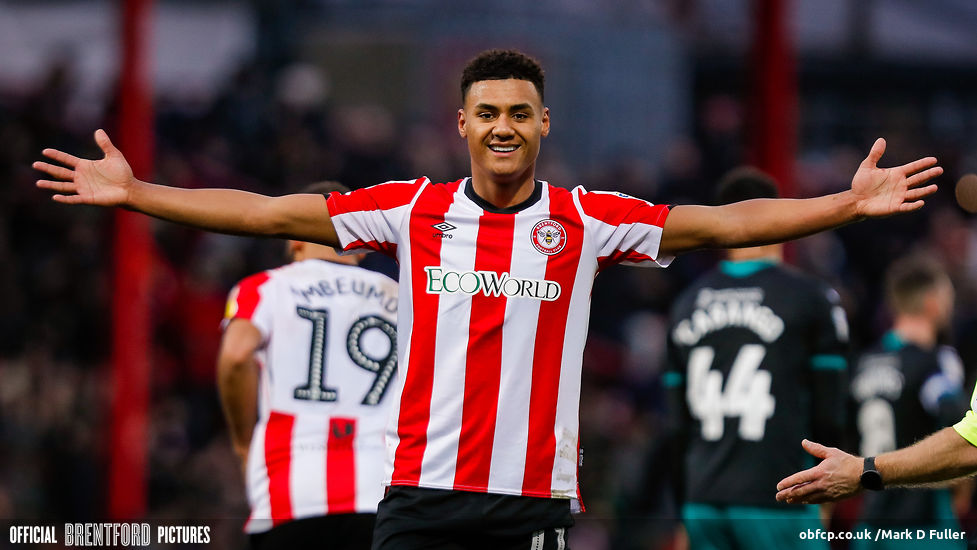 Stewart Purvis saw how a Boxing Day cracker at Griffin Park put the Bees third in the Championship. Brentford’s fifth straight home win strengthened their playoff position while all around them could only draw.
Share |

It was another impressive performance with Ollie Watkins up front and Rico Henry at left back challenging for Man of the Match.

Brentford’s fifth straight home win strengthened their playoff position while all around them could only draw. It was another impressive performance with Ollie Watkins up front and Rico Henry at left back challenging for Man of the Match.

As Thomas Frank rationed out the holiday period playing time between his two less than fully fit players, Pontus Jansson returned at centre-back while Christian Norgaard was the midfielder on the bench with Kamo Mokotjo taking his place in the starting line-up. New goalkeeping coach Andy Quy was on duty for the first time. Although the game had sold out some supporters, possibly put off by the lunchtime wind and rain, seemed to have opted to stay at home and watch live on Sky.

Swansea had suffered a setback in the warm up when one of their few experienced defenders Mike Van Der Horn was injured but they made the brighter start in the opening quarter of an hour. Then Brentford went ahead from a corner. There was a time when that would have been a rare statement but not this season. The Scandinavian combination  of Danish corner-taker Mathias Jensen and Swedish set piece coach Andreas Georgson have upped the hit rate. Jensen found Ethan Piddock who had pulled back into unchallenged space at the back of the box and his header across the goal flew to Bryan Mbeumo who put it away. Georgson quite rightly pointed out on Twitter that this was the 6th set piece goal in the last 9 games including second phase goals.

Brentford now took full control with Rico Henry making a series of bold runs down the left. Bees’ second goal came from a move which started with Henry heading out of defence to Said Benrahma. Rico then scampered down the wing to collect a return pass which he whipped over. At first it seemed to be beyond Watkins in the centre but Ollie stretched enough to steer the ball into the net. Three young Bees fans hoisted their home-made banner ‘Happy Christmas Ollie W’. It was to be just the start of his Christmas celebrations.

Swansea led this division early on in the season and although their form has been inconsistent in recent times they were not going to surrender this game. Leading their fight back in the second half was Andre Ayew who joined in 2015 but was then sold to West Ham, signed back and then loaned out to Fenerbache in Turkey. Returning to fill some of the gaps created by the sale of Daniel James and Oli McBurnie, Ayew made all the chances and then took one.  Bersant Celina shot from the edge of the box, the ball bounced just in front of Brentford keeper David Raya whose handling was, for once, less than perfect. Ayew spotted the chance and was first to the loose ball.

Swansea took further heart and pressed on. Thomas Frank’s first response from the subs bench was a like for like with Joel Valencia replacing Bryan Mbeumo and another with Norgaard for Jensen but then came a more significant one. With Sky’s cameras capturing in close-up every Benrahma twist and turn to add to his show-reel it seemed we had seen one showboat too many for Brentford’s Head Coach. On came Jan Zamburek who can be trusted to hold the ball up on the left without losing possession. He nearly scored himself and then combined with Mokotjo to set up what would have been Valencia’s first league goal. Unfortunately his first shot was blocked, his second went wide.

All through this tight second half Ollie Watkins had been using those striker skills he says he’s been building up in training, holding off defenders, winning aerial battles, slipping in passes. The climax was on its way.

A credit first for Josh Dasilva and his ability to surge forward with a combination of brain and brawn and then see the killer pass. He’s now a fledgling and more muscular Romaine Sawyers. Josh spotted Watkins on the right holding back his run to avoid offside and once put way Ollie bore down on goal with three defenders converging around him. At the last moment it seemed he might lose his footing when defender Ben Wilmot pushed him but just as with his first goal Ollie pulled out one extra effort and steered the ball into the right corner of the net. Griffin Park saluted his 15th goal of the season and his 7th on live TV. His Man of the Match award was clinched. That ‘Happy Christmas Ollie W’ banner got its moment in the TV coverage too. And Captain Jansson who can seem quite restrained at some moments of Brentford success ran over to give him the full Pontus, smothering him with seasonal good will. The day kept on giving when the results elsewhere revealed that promotion contenders WBA, Leeds, Preston, Fulham and Blackburn could only draw.

Brentford now go to Millwall on Sunday full of confidence.