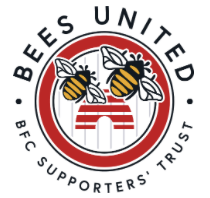 WHAT HAS BEES UNITED EVER DONE?

The Bees United AGM got Greville Waterman thinking about why BU was created, what it has achieved and what its role is today. He looks back to ‘Heroic supporters rattling their collecting boxes to help stave off disaster for another week’.
Share |
more

As I listened online to the Bees United AGM which ran as smoothly and efficiently as I have come to expect, I let my mind drift back to the origins of the organisation, why it was necessary for it to come into existence and the situation faced by the club at the start of the 21st century when things were totally different to how they are now. If you had dared to suggest that within two decades Brentford would be thriving and playing Premier League football in a brand spanking new stadium within the borough then I suggest that the men in the white coats would have been called out to take you away.

It is all too easy looking down from our exalted perch in the Premier League with the financial future of the club secure under the benign ownership of Matthew Benham and safely ensconced in our fantastic new stadium at Lionel Road to forget just how far we have come in so very short a time and to realise just how close Brentford FC came to foundering on the rocks.

Cast your mind back to the turn of the century and remember how we were lurching from crisis to crisis:

The club was simply not sustainable and it was death by one thousand cuts – slow, painful but inexorable and in our hearts we feared dropping like a stone and even losing our cherished Football League status.

Even when Martin Allen arrived in 2004 and by sheer will and force of personality stabilised us and restored some semblance of pride on the pitch by making bricks without straw, his efforts were hindered by the financial realities that we faced.

The cup was dashed from our lips and the gloss taken off our achievement when star man DJ Campbell was sold for relative peanuts to the dreaded Birmingham City in order to stave off the threat of administration immediately after his goals had seen us defeat Premier League Sunderland in the FA Cup on an afternoon of glory and triumph at Griffin Park.

The club was on a financial precipice and the only way was down, and that was the situation that Bees United faced on the 20th of January 2006 when the Supporters Trust took the massive and brave step of taking control of the club by purchasing the majority of shares in the football club with Greg Dyke taking over as Chairman and Ron Noades finally departing.

Things got worse before they got better with another player exodus leading to a pathetic season of capitulation when an appallingly weak, hapless and overmatched squad put together on a shoestring budget plummeted into the bottom division in 2007.

Under the aegis of BU things began to stabilise off the pitch and a semblance of financial control was established which resulted in our fortunes on the pitch recovering under Andy Scott.

Promotion back to the third tier was gloriously achieved in 2009 and the last decade has seen continued progress and success culminating in the Bees first being promoted to the Championship in 2014 and after consolidating there, kicking on and celebrating promotion to the Premier League in 2021, returning to the top flight after an absence of 74 years.

The catalyst for this success has obviously been the arrival on the scene of lifelong fan Matthew Benham and it was Bees United who structured an initial partnership with him and then undertaking significant due diligence and sounding out the views of the supporter base before deciding to sell their shareholding to Benham and eventually ceding control of the club to him in 2012.

One of the secrets of success is to know when to let go and the timing of that deal was perfect and it has proved to be the springboard for our current success and as David Merritt, the Chair of Bees United and a Director of Brentford Football Club said so well at the time of the Benham takeover:

“The ten years since BU took majority ownership of Brentford FC have been immense for the Club. It was Brian Burgess, Chris Gammon and the Bees United Board that created that historic moment for the Club, and it has been Matthew Benham who has enabled the Club to be so successful since.

We started the decade in crisis – we finished it with the most successful season since World War Two, and we head in to this anniversary year for Bees United more positive than ever.

What an incredible decade!”

That comment was made nearly six years ago and the club’s progress and stability even since then has been astronomical.

I will declare an interest as I was a Bees United board member for many years and continue to assist them when needed. I am proud and honoured to be a tiny cog in a wonderful organisation that has played such a crucial role in ensuring the very survival of Brentford FC.

BU remains totally relevant and still has a crucial role to play today even though we are now in far calmer waters.

We remain as a watchdog and a safeguard, observing and contributing to the running of the club and we are determined to protect the interests and long-term future of Brentford FC should the need ever arise again.

BU continues to have a representative on the Brentford FC Board, we also nominate the independent adjudicator under the Club’s Supporters Charter, and most crucially we still retain the critically important Golden Share which protected against the inappropriate sale of our previous hallowed ground, Griffin Park.

Everything is now stable and secure at Brentford FC but you only have to take a look around us at some of our less fortunate brethren, shudder with relief, and realise just what a close-run thing it was and how easily affairs could have turned out completely differently for our beloved Brentford.

It is also imperative that thanks, recognition and eternal gratitude are given to every Bees supporter who shook a bucket, helped fill one or joined BU, bought a Loan Note and gave their support at a time when the club was in crisis and turmoil. Your contribution will never be forgotten and can never be overstated.

Under the aegis and safe hands of the current chairman, Stewart Purvis, Bees United continues to protect the long-term future of Brentford FC and more than live up to its mission “to safeguard Brentford Football Club so that it has a stable and sustainable future as a professional football club.”

BU has also reached the milestone of 3,000 members.

Recently BU gave evidence to Tracey Crouch MP and her “Fan-Led Review of English Football and the Brentford model was praised as an exemplar for other clubs to follow in her final report.

BU has also continued to protect, promote and pay respect to the heritage of the club and curated the “Farewell to Griffin Park – The Fans’ Story” exhibition at the London Museum of Water and Steam as well as producing an impressive monthly newsletter and a lavish pictorial history Bees, Battles, Buckets and Ballot Boxes; How Brentford Fans Paved The Way from Griffin Park to Lionel Road which told the incredible story of the move from Griffin Park to Lionel Road and the formidable obstacles that had to be overcome on the long and tortuous journey.

It is still vital that we continue to support this incredible organisation without which we would not be celebrating so much success both on and off the field today.

Congratulations to Bees United and I will celebrate and raise a glass tonight to everybody who has supported or joined it since its inauguration.