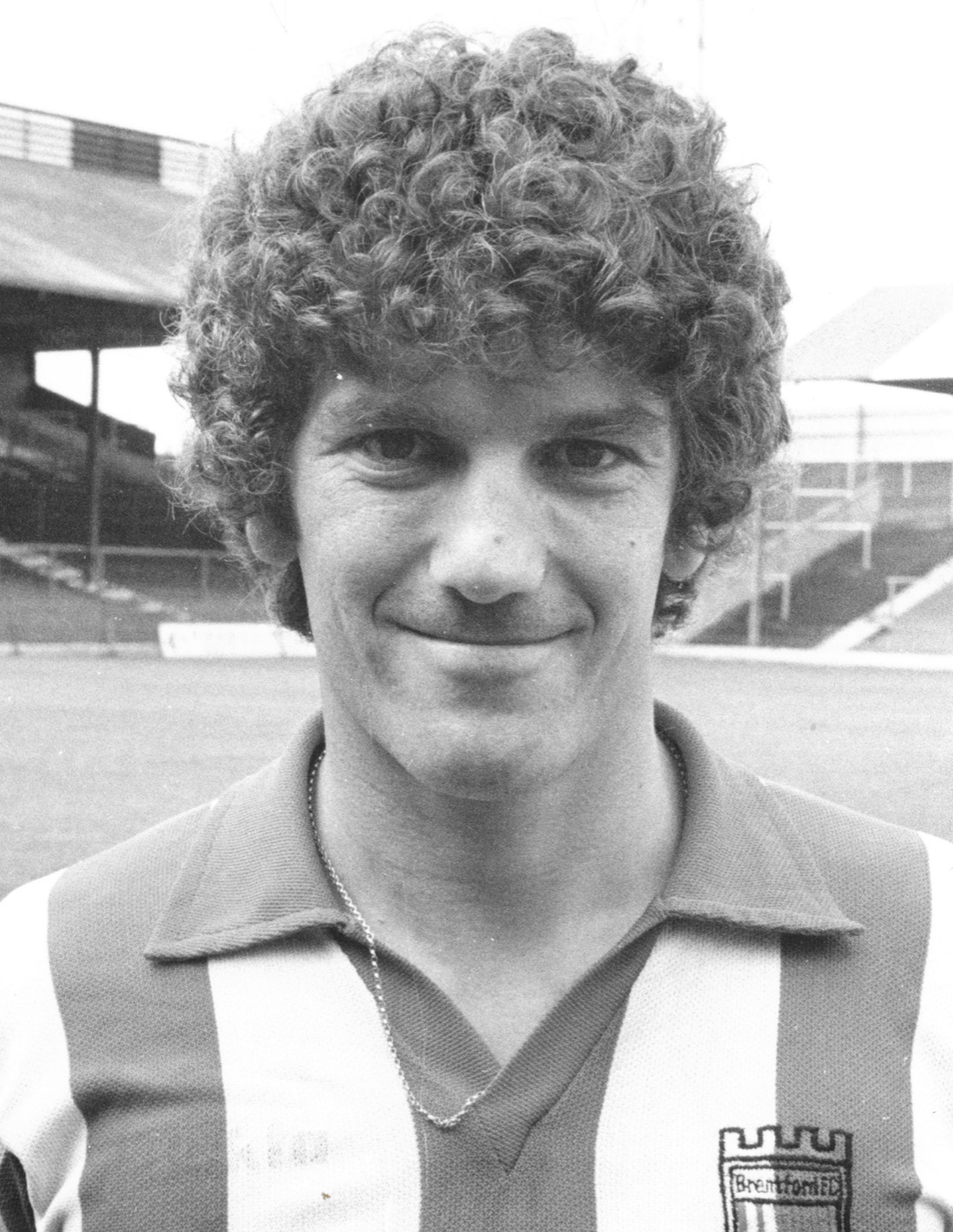 The former Brentford mid-fielder Paul Shrubb has died aged 64 after a long battle with Motor Neurone Disease. Brentford historian Greville Waterman visited Paul in 2014, five years after the illness forced him to give up work. Grev wrote this article which we re-publish as a tribute to Paul.
Share |
more

‘A Great Day Out’  by Greville Waterman.

There are some days that will live long in the memory and always bring a smile and a warm glow when you think about them. Yesterday was such a day.

Like most Brentford supporters I was aware that former favourite, Paul Shrubb, has been suffering from Motor Neurone Disease for quite a while and when another long-term fan, Paul Hewson, suggested that Paul might enjoy reading The Big Brentford Book of the 80s in which his exploits are highlighted, I jumped at the opportunity to personally deliver a copy. There was an added bonus when Paul mentioned that Andy McCulloch, who he knows extremely well, would also be there given that he is Godfather to one of Paul Shrubb’s daughters.

So I turned up at Paul’s beautiful home in Ash not quite knowing what to expect, but from the moment I arrived I was made totally welcome and spent a couple of hours chatting and laughing and relaxing in the company of some of the nicest and most pleasant people I have ever met.Neither player, of course, needs any introduction to any Bees fans who remembers the late seventies and early eighties.

Paul began his career at Fulham, played one first team game and, then, much to his disgust was released just after the 1975 FA Cup Final.He then spent two years playing out in South Africa, before returning to England and joining Brentford in March 1977.After scoring on his debut as a midfielder, he moved back into the defence and formed a successful partnership with Pat Kruse which helped the Bees to promotion in 1978.He was an absolute fans’ favourite and in all made almost two hundred appearances during his five years at the club, before moving on to an equally successful spell at his local club Aldershot, where he is also revered.

Shrubby was a very skilful footballer, quick to see a through pass and with the ability to score from long range, but more importantly he could be relied upon to give absolutely everything he had for the team’s cause.He never gave up, never hid and was always there to help and support his colleagues.He sublimated his own abilities for the sake of his team and was loved and respected by everyone for doing so.Nothing has changed today.

He looks extremely well and his legs remain strong.There is not an ounce of self-pity in him and he takes pride in the fact that he is about to commence his ninth year with an awful wasting disease that normally takes its terrible toll well within that time period.

Not only is he surviving, he is thriving and acts as a source of inspiration to other sufferers from MND, visiting them in the local area and encouraging and supporting them through his own personal example.He is fortified and succoured by a close and loving family in whom he takes great pride, joy and comfort and he appears to be a person with great inner strength who is totally at peace with himself.

He is also a man of steely determination who stated that because he was so small he was used to fighting for everything in his life and that nothing had changed and he would never give up. He was full of stories about his time at Brentford.It was a real family club where everybody mixed well.

He remarked with pride that every member of staff at the club, from the manager to all the players, and also the back room team took the time and trouble to attend his first daughter’s Christening.That was just the way it was done in those days.

He mentioned the time when he partnered Steve Phillips up front at Southend, neither of whom were the tallest of men, and Paul acted as the target man – a more unlikely one would be hard to picture – but he got one over his morose strike partner when he scored and Phillips didn’t!

Before his Brentford debut, skipper and team inspiration Jackie Graham gruffly advised him to just get on with his game but offered to “help him out” if any of the opposition started to pick on him – not that Paul needed any assistance as he was never a soft touch and his opponents certainly knew that they had been in a battle. He regretted that he never won the Player of the Year award but he did collect it once at the presentation at The Winning Post when the actual winner, Andy McCulloch was unable to attend.

He is still friendly with Paul Priddy and Trevor Porter and he was responsible for bringing Porter, another former Fulham colleague, to the club when Len Bond was injured in a car crash and reserve keeper Graham Cox was suspended after being sent off in a preseason friendly. Andy McCulloch was also an absolute delight to spend time with. 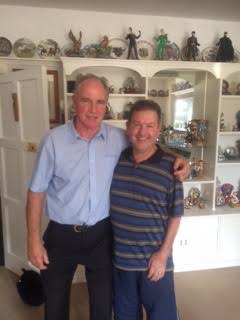 Andy McCulloch with Paul Shrubb in 2014

Relaxed, witty and urbane,  he looked lean and fit and he too spoke fondly of his spell at the club and acknowledged that Brentford had sold him far too cheaply to Sheffield Wednesday, although that meant he could ask for higher wages in compensation! Ian St John, Jack Charlton’s assistant had tapped him up whilst he was lying on a stretcher following an injury sustained in a match when he was being scouted by Wednesday. His knee was a total mess when he joined Brentford after botched treatment at Oxford United, but Director Eric Radley-Smith, a noted knee expert, eventually got him right and Andy became the perfect striker.

Tall, fearless, great in the air, strong on the ground and excellent in front of goal.He spoke of his battles with the massive centre halves of the time like Millwall’s Barry Kitchener and Aldershot’s Joe Jopling and was most interested to learn that his former nemesis still owned a pub nearby, and remarked that he might pay him a visit! He well remembered what happened at Aldershot back in 1977 when Jopling feigned injury and the referee bought it and sent Andy off for an alleged headbutt. Seeking revenge after the match, Andy tried to get into the home dressing room but was fought off by Jopling’s wife brandishing an umbrella.

His mother came to watch him play for Cardiff one afternoon at Craven Cottage. The team left the dressing room reluctantly as the Grand National was just starting. Andy scored after thirteen seconds, was sent off a minute later for telling the linesman what he thought of him, stalked off the field, apologising to his Mum as he went for her wasted afternoon, and was safely back in the dressing room in time to hear the commentary of the rest of the race.

He enjoyed playing with Gordon Sweetzer who he felt was far too brave for his own good and also recalls playing at Luton where their Chairman, Eric Morecambe, would always visit the away dressing room before the game, go through his repertoire of jokes and facial expressions and do his best to put the opposition off.These and many other stories made the minutes and hours flash by and a great time was had by all.

Paul Hewson suggested that Shrubby should attend the Brentford versus Fulham match next month and ideally come onto the pitch to be introduced to the crowd. Paul thought about it for a moment then, his face wreathed in smiles, said that he would take great pleasure in doing so and would wave at both sets of supporters and he then demonstrated exactly the gesture he would employ towards the Fulham fans given that his opinion of that club is exactly the same as ours.

Paul, we salute you.

A brave and exceptional man who is an example and inspiration to us all.

Thank you for letting me into your life.