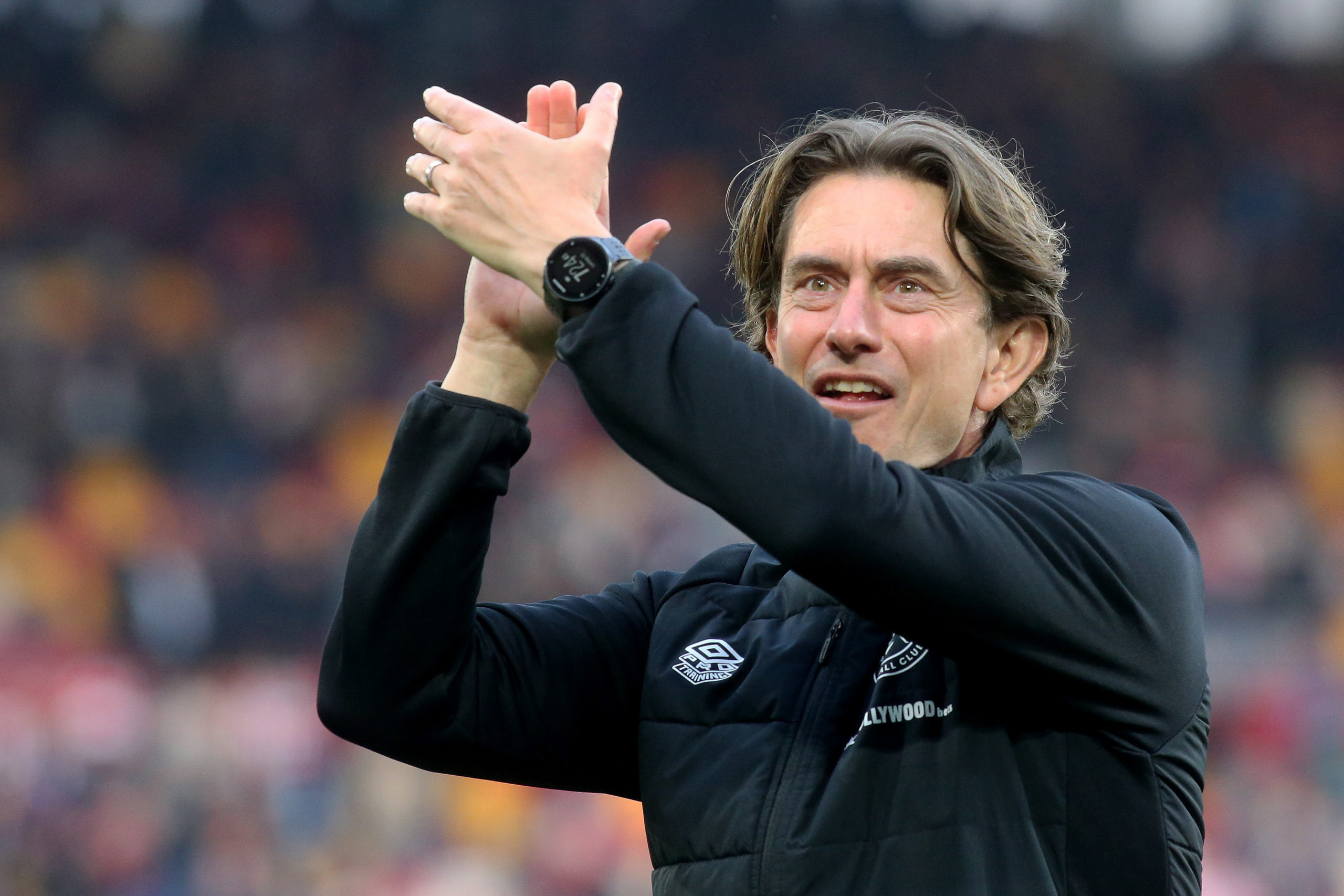 THOMAS FRANK HAS LED IN EVERY WAY

BU Contributing Editor Greville Waterman is writing a book about Brentford's first year in the Premier League which will be published soon. Here he reflects on 'an unforgettable season'.
Share |
more

Thomas Frank has played such a crucial role throughout these incredible – almost unbelievable – happenings of this unforgettable season and exemplifies what our wonderful club is all about.

He preaches consistency, calmness, the virtues of hard work, bravery, organisation and togetherness. Looking back on his utterings throughout the season, his messages – both internal and external – never changed, and, at no time – even when we couldn’t seem to buy a win – did he ever sound worried, flustered, or even concerned about the eventual outcome.

In the model we trust – and again – as so many times beforehand, it came up trumps. It predicted a 14th place finish – we actually outperformed it!

The way Brentford faced, adapted to, and eventually overcame the challenge of the Premier League, and made light of the fact that they possessed the least experienced squad, and had the smallest crowds and budget in the division, bears testimony to their levels of confidence, planning, innovation, adaptability, versatility, organisation, and sheer hard graft.

They defied expectations, and certainly belonged. In Thomas Frank’s oft-repeated words, Brentford became a real “asset to the Premier League,” never spending a single day in the relegation zone – or even beneath 15th place.

Alyson Rudd perhaps summed up our approach best of all in The Sunday Times when she opined: “Any club finishing below Brentford ought to feel embarrassed, for the West London club have proved that economic and emotional intelligence can outwit big budgets.”

The bulk of the 2020/21 promotion winning squad adapted seamlessly to the higher level, with nine of them starting over 20 games, and Mathias Jensen narrowly missing out – a feat perhaps only surpassed by Sheffield United and Leeds United in recent times – and the whole was certainly greater than the sum of its parts. This was a progressive, well-oiled, well-drilled and brilliantly coached squad, which – until the introduction of Christian Eriksen – boasted no real individual stars.

You knew what you were going to get every week with Brentford – a team with a clear identity, DNA, and sense of unity and togetherness, who would give everything for the cause and switch positions and formations as the need arose.

They were determined to make the most of their opportunity – and prove themselves they most certainly did. From a team of veritable no-names, you can now be sure that the names of David Raya, Ethan Pinnock, Rico Henry, Vitaly Janelt, Christian Norgaard, Ivan Toney and Bryan Mbeumo are etched indelibly on the wish lists of many leading Premier League teams. With the second youngest squad in the league, they, and several others too, can only get better. Testimony, indeed, to the detailed and inspired work of the recruitment team, and their adroit use of bespoke statistics, data analysis and a combination of video and live scouting.

Everyone at the club, both on and off the field, worked relentlessly and smartly to help bring about success, which was suitably recognised when the club was named “Sport Organisation of the Year” in the prestigious Sport Industry Awards. 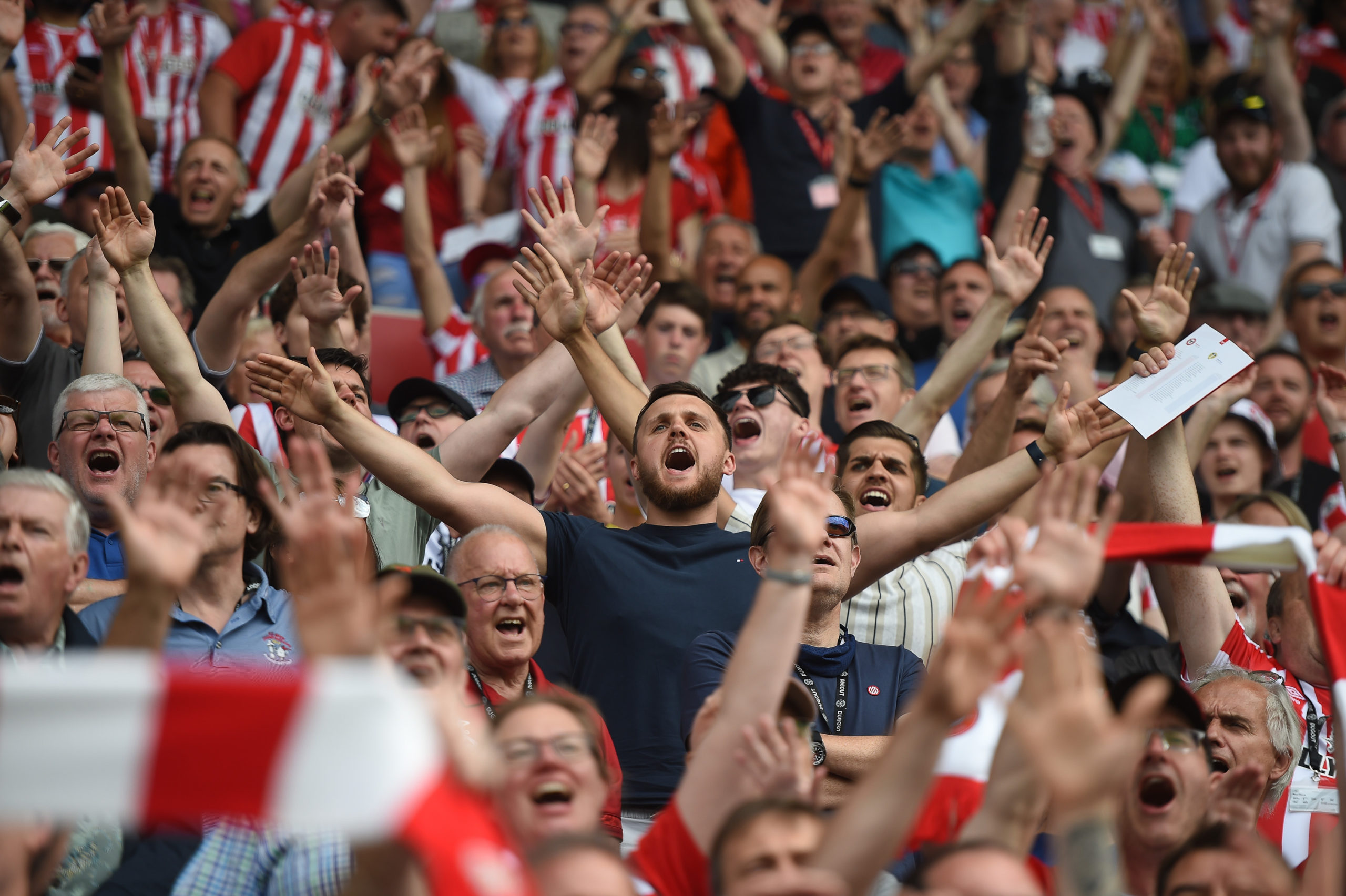 It is impossible to ignore the fans, who supported the club passionately and lustily throughout the season. They sang, they danced, they laughed, they smiled – and some even cried. Many clubs pay lip service to the definition – but Brentford truly IS a Community Club. The supporters helped inspire the team to new heights. The players fed off the fans – and the fans fed off the players. Together, they were united as one, and the atmosphere engendered at the bijoux Brentford Community Stadium was loud and raucous – but always positive and good humoured. The fans took such pride and pleasure in being an integral part of this marvellous Premier League adventure. Goalkeeper Álvaro Fernández put it absolutely perfectly when he tweeted: “You are the engine of this team!”

The connection between club, team and fans was admiringly remarked upon by Matthew Syed, in The Times. He attended the Southampton game, and described Brentford as “a positive, uplifting story,” and his match day experience as “different, fun, inclusive and with some spectacular football to boot.” Surely, nectar to the ears of everybody involved with the club.

This has truly been a season to remember, with the club gaining its highest finish since the sixth place in the First Division, achieved way back in 1937/38.

So, what happens next? At the time of writing the future of Christian Eriksen remains undecided. His presence next season would provide an immense boost and fillip to players, staff and fans alike, and also help persuade other key transfer targets to join what is already seen as a club on the rise.

There are no plans to sell any of the leading players, but there will be changes and additions to the squad. It has already been announced that goalkeepers Álvaro Fernández and Jonas Lössl will be leaving when their loan deals end next month and that the contracts of the injury-plagued Julian Jeanvier and Zanka will not be extended.

Phil Giles sees no reason why Brentford will suffer from the so-called “Second Season Syndrome,” given the amount of planning and activity that will take place in the pre-season. He hopes that Brentford will become an average Premier League team by the end of next season – and I see no reason to doubt him.

Nobody will allow standards to slip. As Thomas Frank has said: “We do well, but there is more in us, and we need to push.”

In the Daily Telegraph, Tim Wigmore revealed a recent analysis by sports economist Stefan Szymanski and football finance expert, Kieran Maguire, which highlighted Brentford for obtaining the best value in the transfer market, and Szymanski believes that the best is perhaps yet to come: “If Matthew Benham is prepared to recycle the Premier League money into players, he’s got the cash now which he didn’t have in the past.

“If Benham can do what he’s done for the last decade for the next decade, then Brentford will be getting to the Champions League every year.”

Heady words, indeed, but, despite our success, we cannot rest on our laurels.

We are proud to be just a bus stop in Hounslow.

THIS IS AN EDITED EXTRACT FROM “JUST A BUS STOP IN HOUNSLOW” BY GREVILLE WATERMAN WHICH WILL BE PUBLISHED BY HAWKMOOR ON 1ST JULY 2022 PRICED AT £12.99 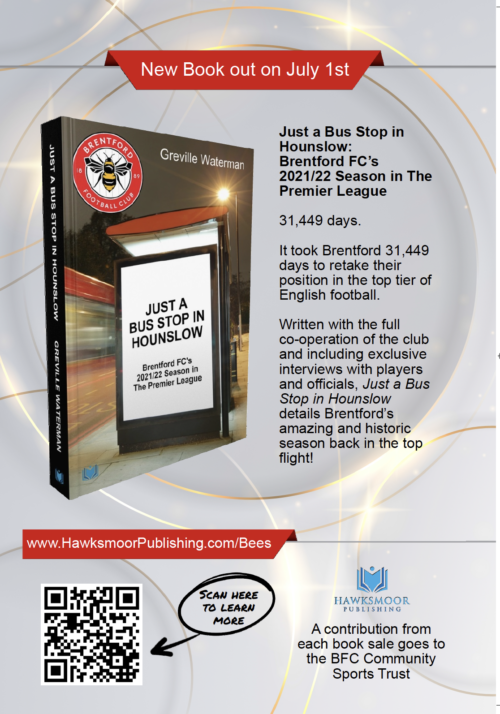