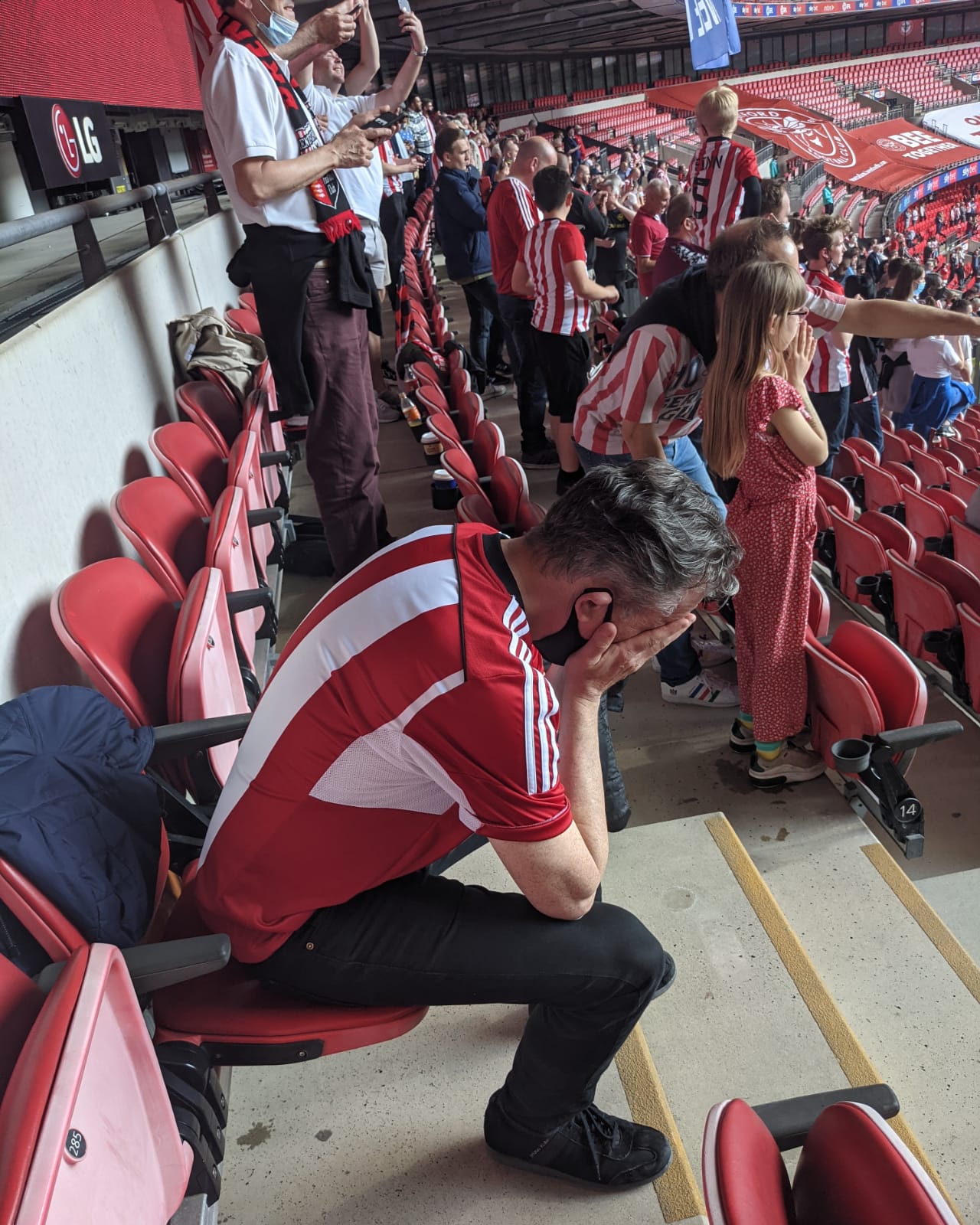 THE DAY I WAS HAPPY TO BE MADE REDUNDANT

Bees United asked the Press Association's Brentford correspondent, Jim Levack, to write a very personal piece about his day at Wembley, how the result affected him professionally and personally and the family memories it evoked.
Share |

Like many others I sunk to my seat, held my head in my hands and cried when the final whistle went at Wembley.

Promotion meant that after 37 years reporting on the club since Frank McLintock’s reign, I would now be surplus to requirements. The Press Association like their own full-timers to cover Premier League clubs.

But my potential axing wasn’t the reason I had tears in my eyes. In fact, the chance to be a fan once more as Pogba, De Bruyne and Co come to town is a prospect that makes redundancy seem trivial.I knew the day would come. Even bought a season ticket I was so certain. It was always a case of when, not if.

No. It was simply the enormity of the fairytale coming true that, for a minute or two, was just too much for me to contain.

As I eventually rose to my feet, tears still in my eyes, I looked to my right and my eldest son Nick wasn’t quite as bad. But his reddened face gave the game away as we hugged.

The tears of joy were prompted by visions in my head of my dad, grandad and grandma beaming, all once dedicated season ticket holders and all in the vanguard of the 67 protests.

In my mind’s eye they were there right alongside me, in the socially distanced seats, experiencing the same tsunami of emotions. I could ‘see’ their faces… and I cried again.

There was tension, fear, delight, euphoria and then disbelief that our small, friendly, family club with treasured values had achieved something so fantastical.

As the mood turned to Kool and the Gang celebration, my son and I joked that “Grandad would still have found something to moan about”.

He loved a whinge but Johnny Brooks was the best player ever, Harper, Greenwood, Hill the best defence, a lot more to Hurlock than most people see. My dad was, he assured me in often heated rows, always right in his assessment of players and teams.

Those physical links with my old man might be gone but, like countless other celestial Bees fans whose descendants partied long into the West London night, they were there at Wembley on the journey with us. They were the reason for the journey starting in the first place.

As the players celebrated, a new reality dawned that will see Brentford begin a new chapter in the club’s history as we seek to become established in the top flight, to upset the applecart and maybe even dent a few egos. Little old Brentford eh?

We have a new home which rocked with just 4,000 so 17,000 plus will be off the Richter scale, we have a new level to play at and we will almost certainly now begin to attract new fans.

They are more than welcome, but now is the time when it’s absolutely critical to cross the T’s and dot the I’s on this dawn of a new modern era for the club.

The passing of Griffin Park into history is now almost complete – just the floodlights remain – and the new development will gather pace as quick as Roerslev’s match-winning diagonal run.

A central park located on the old centre circle will be a fitting tribute to those Bees fans who didn’t make it to Wembley for our finest hour so far.

So it’s important that the developers do not water down the proposals for a memorial garden which were drafted by award-winning landscape gardener and Bees fan Cleve West.

His proposal for trees planted in a 4-4-2 formation might be a little outdated tactics-wise, but that, memorial benches and other tributes will make the transition that little bit easier for us all.

Likewise, it would be wonderful to see something like a memorial wall at the new stadium commemorating those souls who helped form the foundations of the club as we know it today.

Behind every great man, there’s often a strong woman and I know Brian Burgess – whose role in making the new ground a reality must never be forgotten – won’t mind me suggesting that his wife should share a brick alongside the likes of Rob Rowan.

In the meantime, and in the absence of a more physical tribute, Bees United have launched an online one to all those fans who didn’t live to see our finest day.

So as well as Brian’s wife, Rob, Miriam Waterman and your own Bees-loving dearly departed, I’d like to nominate Ian Levack, Kenneth Levack and Madge Levack.

As a kid when we’d lose to Workington and Hartlepool, I used to blame them for “making me support Brentford”.

Now I can’t thank them enough… and I’m better, more rounded and loyal for experiencing both ends of the football spectrum.

The memorial can be seen here

If you would like to add a name to the list please email admin@beesunited.org.uk giving the full name and the year of the person’s death.