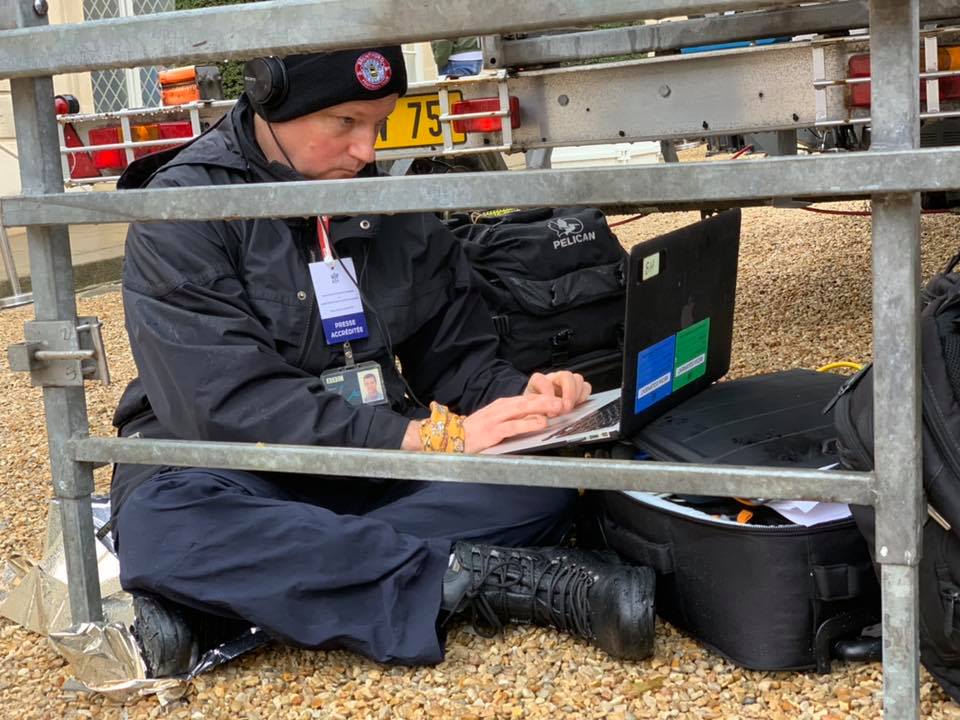 THE BEES PODCAST DIRECT FROM A CAR PARK IN PARIS,THE U.N. IN NEW YORK OR A SHED IN HANWELL.

Stuart Hughes is a fan who has turned his passion for the Bees into a global media project.
Share |
more

After every Brentford game Bees fans around the world can catch up on what’s happened in a short podcast with highlights from the commentary plus post-match interviews with Thomas Frank and players. Listeners to ‘Bees Bulletin’ probably assume it’s coming from the ground but in fact it is likely to be from United Nations Headquarters in New York, a conference centre in Japan or a shed in Hanwell.

Bees Bulletin sounds professional because it is all the work of one professional, Bees fan Stuart Hughes. His day job is BBC World Affairs Senior Producer and for half of that working time he travels the world producing, filming, video editing and sometimes reporting himself on international stories for TV, radio and online. A normal year will be a mix of breaking news, conflicts and global summit conferences. Digital technology is at the heart of his working day but it also allows him to follow his favourite football club as he travels. 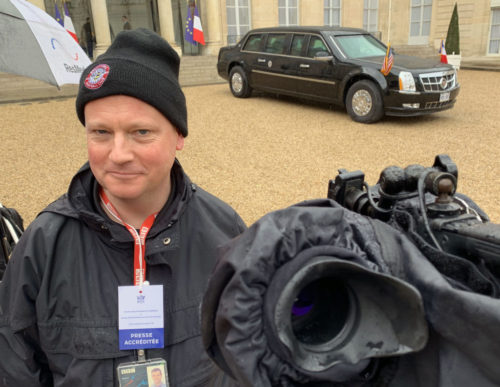 Stuart Hughes, in Bees bobble hat, next to President Trump’s car during a visit to Paris

Stuart is originally from Cardiff but when his girlfriend Aileen, now his wife, moved to London in 1997 he decided he would move too, from BBC Wales to BBC News in London. Then about 10 years ago he began looking for a club to support.

“My son Billy wanted something to do on Saturday afternoons and once a season Brentford did a  ‘pay what you can’ home game at Griffin Park. It was a brilliant idea. We went along and I just fell in love with the whole ethos of  the place. I think it was the sense of community. It felt like a very safe environment for my son who was a very little kid at the time and and a very welcoming place for me as well. It also felt a world away from the direction football was taking in the Premier League era. I thought it was wonderful that this kind of football club still existed and I wanted to be a part of it as a fan more than anything else.” 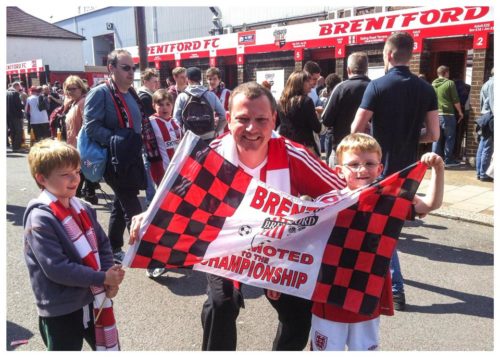 Stuart and son Billy on the day in 2014 when Brentford were promoted to the Championship.

Stuart had been travelling for the BBC since 2002 but now as a committed Brentford fan he started to stay in touch around the world by listening to Bees commentator Mark Burridge and his colleagues on ifollow. Wherever Stuart could get wifi he would follow the games. ‘It was a bit of a lifeline, wherever I was in the world, and sometimes covering dangerous stories, match day was a very tangible link to home. If I was feeling a bit homesick for my family then following the games from a distance really helped.

“I have spent many evenings in a hotel room either listening to or watching ifollow. I’ve even done it while I’ve been at a press conference with ifollow in one ear and Donald Trump talking in the other. I’ve listened in press centres in Japan or China and on planes flying to the U.S.A”. 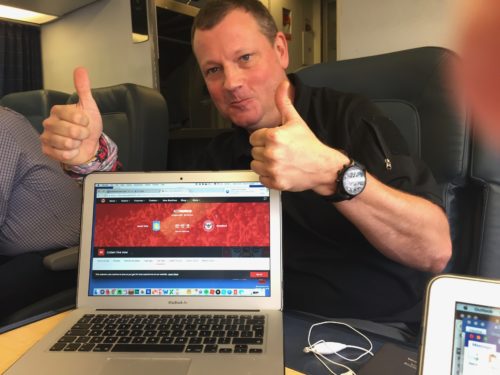 Stuart realised how using wifi he could not only listen to games but create his own audio podcasts about the matches wherever he was.”Two seasons ago I started doing the Bees Bulletin podcast off my own bat. I thought I’ve got some skills as a journalist and broadcaster and if I could merge them with my love of the club it would allow me to share my passion for Brentford. I also thought it was important that Brentford was taken seriously and reported seriously rather than just the one paragraph in the Evening Standard that was the norm at the time. I wanted to report Brentford as I would as a journalist.

“I just started doing them and putting them up. I got a call from Mark Burridge a couple of seasons ago saying ‘do you want to be part of the commentary team?’. I felt honoured to do that but I didn’t want to tread on anybody’s toes. I’m never going to replace Mark for Marcus Gayle or Mick Cabble in terms of their knowledge of the club or tactics.”

When Stuart is in in the UK he heads home after a game to prepare the report in what he calls his ‘News-Shed’ at the bottom of his garden. This was first set up to enable him to broadcast for the BBC but now it doubles as a ‘Bees Bulletin Shed’. “I record the ifollow match commentary, I download the post-match interviews with Thomas and the players, then I chop it up and try to get it up as quickly as possible. 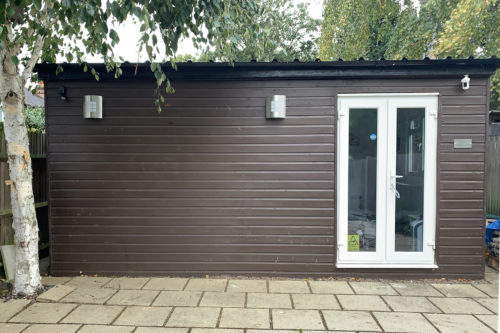 Where the magic happens -Stuart’s ‘News
Shed’- at the bottom of his garden. 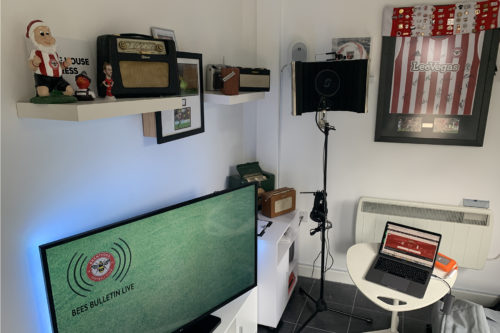 Inside the’ News Shed’

“If I’ve not been at the game I can record the commentary anywhere in the world with a laptop, and I have all my broadcast kit with me anyway so its just like putting together a piece for the BBC. 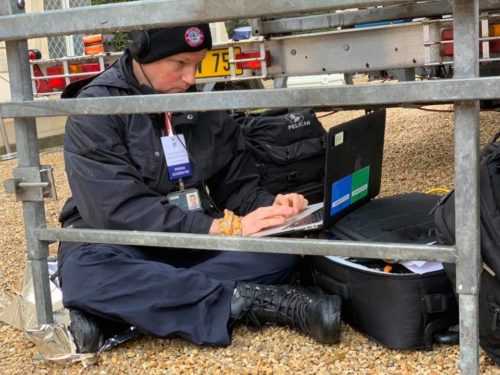 In a car park in Paris

“The old trick of going under a hotel duvet to get the best quality on the sound recording still comes into play. Sometimes after a day’s filming, while my colleagues go off for dinner I will head back to the hotel to do the podcast then get up early to do the Today programme. I’ve made the podcast on trans-Atlantic planes and at the UN General Assembly. Obviously as the BBC are paying my wages my work for them comes first but usually whenever’s there’s a game, wherever I am in the world, I’ve been able to make a Bees Bulletin”. 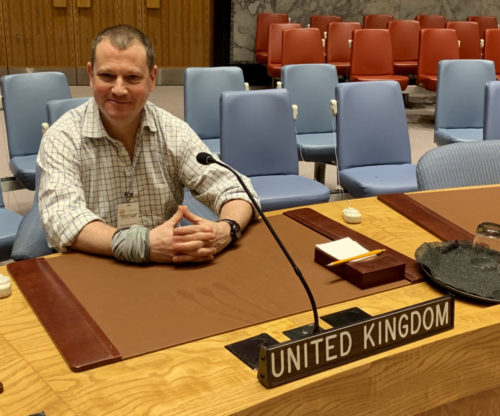 During lock-down Stuart even began creating a video version of the Bees Bulletin using the TV facilities in the shed . “I realised there was a Brentford shaped hole in fans’ lives. The video version was something to try to keep their spirits up by me chatting with Mark, Marcus and Mick. We’ve now tried doing ten minutes of post-match chat on camera immediately after games in the new stadium and putting that on Youtube.”

Stuart’s story is all the more remarkable because of what happened to him in 2003, which he refers to as ‘a bit of a set to in Iraq’.During the war of 2003 Stuart was on assignment for BBC News in an area controlled by Kurdish Peshmerga forces. He went to a front-line position abandoned by Saddam Hussein’s forces which local guides said was safe. But seconds after stepping out of a vehicle he triggered an anti-personnel landmine which blew off his right heel.

His cameraman, the Iranian photojournalist Kaveh Golestan, instinctively thought they were coming under mortar fire, tried to run for safety but tragically he set off two more landmines. He was killed.

Stuart received emergency medical treatment in Iraq before being flown back to the UK. Five days after stepping on the landmine his right leg was amputated below the knee. He began a long rehabilitation and was fitted with his first prosthetic leg. When he was later fitted with a new one, the original version was sent to an exhibition at the Imperial War Museum North  in Manchester.

“At a time when I was undergoing rehab and getting my life back on track which was physically and psychologically traumatic, having Brentford there as a distraction and as something I was passionate about was therapeutic. Any chance of walking out to play at Griffin Park was somewhat stymied by having my leg blown off but at least I could be there in the stands and letting off a bit of steam on a Saturday afternoon.”

The BB You Tube channel

And there’s even a merchandise store

Stuart has also made a video called “Inside the News Shed”