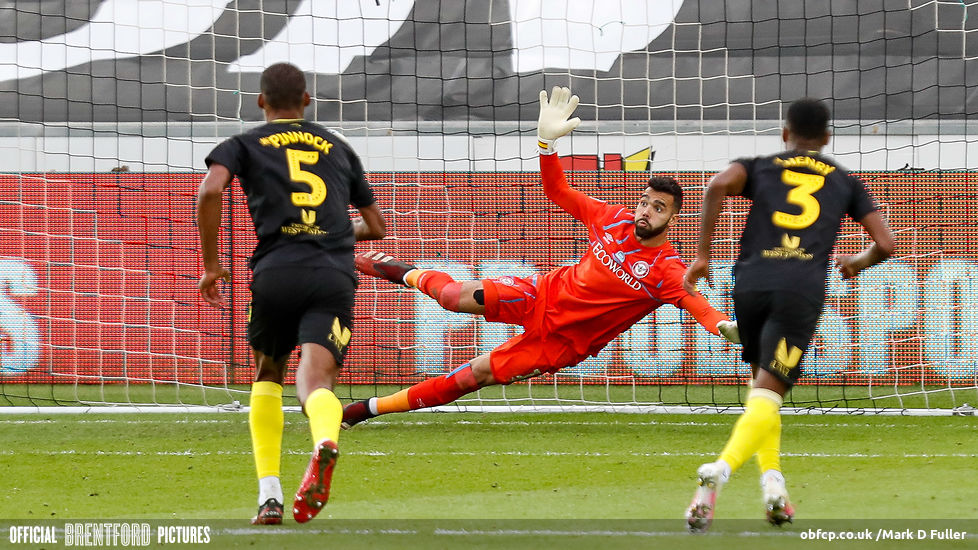 Brentford save a penalty, dispute a red card and take a one goal deficit into the second leg. Stewart Purvis reports from the Liberty Stadium.
Share |

Brentford will go into the second leg of this play-off at Griffin Park on Wednesday with more confidence than might be expected after their third consecutive defeat.
They know that for much of this game they were the more fluent team playing without the nerves or hesitancy we feared after the two games that put players and fans through an emotional wringer. Having beaten Swansea by at least two goals in earlier games this season they know that target is achievable. And they will be driven on by a righteous indignation at the decision by referee Keith Stroud to red card Rico Henry which, subject to a possible appeal, will keep him out of both the second leg and the final if the Bees get there.
Your reporter had a very clear view from the main stand in the Liberty Stadium and the uncomfortable truth is that when Rico set off for that ball he was always going to arrive second. But because of his extraordinary pace and his sliding tackle he arrived only a fraction of a second after Connor Roberts made the first touch and Rico cleared the ball and sent Roberts flying. The first response of the Sky and iFollow commentators was that it wasn’t even a foul but later the studio pundits opted for a yellow card rather than a red. Brentford can appeal the decision but significantly the pundits didn’t think the red would be overturned believing the powers-that-be will be influenced by the fact that Rico was not in full control of his tackle. Thomas Frank begged to differ saying ‘I’m 100% we will have a decision where Rico will play on Wednesday’. He confirmed there would be an appeal. He also couldn’t understand why VAR, not used in normal season Championship games, couldn’t be available for the play-offs where £170 million pounds was at stake. He thought that without the red card Brentford would have gone on and won the game.
Thomas had started the game with a mostly unchanged line-up rotating Emiliano Marcondes to bring back Matthias Jensen but resisting the temptation to start Tariqe Fosu or Sergi Canos instead of Bryan Mbeumo or bring Shandon Baptiste into midfield. Those same decisions will face him again on Wednesday because neither Mbeumo or Jensen shone at Swansea.
Swansea’s style of play allows their opponents space in midfield and Brentford used it with Said Benrahma often dropping deeper into central midfield to start his drives towards goal. Said had the first chance of the game with that rare sighting: a Benrahma header, but it went just wide.
Another early chance also came from a header:  an Ollie Watkins back flick was well saved by Erwin Mulder in the Swansea goal. Brentford had most of the possession in the first quarter with Christian Nørgaard again outstanding in midfield. But their chances went begging especially when Rico Henry burst down the left and crossed for Watkins to head wide.
Swansea’s first chance was when Swansea striker Rhian Brewster, a Liverpool loanee, launched one of his now trademark ferocious drives which David Raya did very well to beat clear.Their second chance again featured Brewster. When the ball rebounded to him off the post after a corner he tried to head it into the Brentford goal, possibly from an offside position, but Raya was able to smoother it.
On balance the Bees deserved to go in at half time ahead and they would have if Said Benrahma had ended an extraordinary slalom run through the Swansea penalty area by shooting into rather than over the bar.
In the second half more Brentford chances followed -Jensen had one of the best which left him head in hands and then came yellow cards for him, Henrik Dalsgaard and Christian Nørgaard, as the game got rough round the edges.
When Pontus Jansson challenged Brewster in the box, a penalty was given against him. Andre Ayew did a stop-start run-up which gave Raya an extra moment to guess right and diving left he one-handedly saved the shot.
Then came the sending off and Thomas Frank brought on Mads Roerslev to cover at left back, Josh Dasilva made way. And up front Marcondes replaced Mbeumo.There were 25 minutes to go, either to hold out for a draw or snatch a winner. With only 8 of those minutes left Ayew, determined to redeem himself after the penalty miss, attacked from the right, Conor Gallagher (remember him from that costly goal against us at Charlton?) did a clever flick, and Jay Fulton set it up for Ayew to smash it into the corner of the net. For once Raya could do nothing about it.
Joel Valencia came on for a tiring Benrahma, and Shandon Baptiste for Jensen.  Brentford’s only chance to get an equaliser came in the final few minutes when Ollie Watkins faced goal but couldn’t get the ball out from under his feet.
At the end Thomas Frank shook hands with the officials, his body language was calm but it’s difficult to believe words were not exchanged.