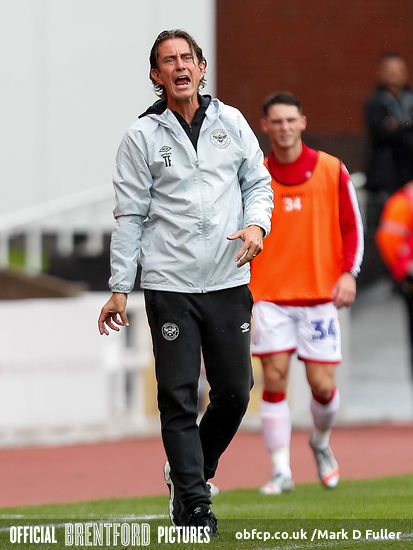 As Bees fans debate what went wrong for Thomas Frank’s team at Stoke, Brentford FC Deputy Chairman Donald Kerr, who was there, stands up for the squad.
Share |
more

The only way to start this report is with the final score, 1 nil to Stoke City. Having seen WBA lose last night and having spent the rest of the night and this morning thinking about the opportunity created by that loss, it was deeply disappointing not to take advantage of it. Immediately afterwards, on social media, this was cruelly described as snatching defeat from the jaws of victory, and comparisons were being drawn with the Trotta penalty against Doncaster, but this doesn’t tell the whole story. Before we kicked off this afternoon, we had played 7 high pressure games against dogged opposition, none more tough than against Preston only three days previously, and, as they did today, every member of the team gave their utmost. This is a team that, at its best, and it has been at its best over the same period, is a delight to watch and one that most other teams find impossible to negate. We were all wondering if the intensity of the challenge would take its toll and, together with perhaps the most organised defence we’ve faced in recent weeks, it seems that it might have done.

The pattern of the game was set right from the first minute, with Stoke getting the ball forward into wide areas and putting some great crosses into the box, where Vokes and Gregory were waiting for them. We tried throughout the game to get into our passing rhythm but too often the last pass in the final third was intercepted or the ball was taken off the toes of Ollie Watkins and Said Benrahma. Brian Mbeumo was busy down the right wing, and Rico Henry made some dashing runs down the left but the sharpness and pace of previous games seemed to be lacking in much of our work. Stoke, with Powell Batth and McClean adding their vast experience and knowing professionalism to the two powerful forwards, were making life very difficult, and Clucas was also very busy in midfield. Having said all that, we were quietly confident that for all their threat, they didn’t seem likely to score, and, after all, we would be content with a point if we couldn’t have all three. And then as the clock ticked on towards half time, David Raya failed to either secure a long shot from Clucas or push it away, and Gregory jumped on the rebound to put Stoke ahead. Even then we were not too downhearted as we judged we would create chances just as we have in almost every game this season and we would prevail. But it was not to be. The only notable event in our favour in the first half was a blatant foul on Ethan Pinnock in the box from a set piece that went unnoticed and unpunished. It was a clear penalty but the lack of a decision rather summed up our day. If we were going to get anything from the game we would have to do it despite the officials.
To be fair to Stoke, they had the best chance of the third quarter of the game with another beautifully weighted cross headed only narrowly wide with our central defenders both beaten, albeit for the only time in the match. Our tempo increased after the restart and we seemed to be getting into our stride, but rather fussy refereeing and incessant time wasting made this difficult. If this seems like sour grapes, it probably is, as there was little spark in our work, but one wonders how or why officials are so reluctant to get on top of such frustrating tactics designed to break up play.

Perhaps because our nerves were being shredded by the inability of our forward line to have any impact on the Stoke defence, it became very difficult to watch. Time and time again we passed the ball across the back line, through the midfield, chiefly by great work again by the tireless Christian Norgaard, to Said or Emiliano, who had replaced Josh da Silva on 59 minutes, only to see the move break down on the edge of the packed Stoke box. They were stretched across the park with only Gregory up front, and were so well drilled and, mainly within the rules, physical, that we really didn’t trouble Davies in goal until the last five minutes.Thomas tried a number of different permutations, bringing on Halil and Sergi for Rico and Matthias on 69 minutes, and then Shandon and Tariq for Bryan and Henrik for the last 10 minutes but it didn’t change the pattern of play, now largely Brentford in possession running into the wall that was Stoke’s defence and the odd but ineffective counter attacks. The only impact that Campbell had made as a substitute, in truth, was that his time wasting was so blatant as to finally see Mr Eltringham produce a yellow card. Such was the surprise felt by the official at this point that he then threw his yellow card to the ground and ran off without it. Emiliano I think it was that called him back and retrieved it.
We piled forward in the last five or ten minutes with more pace and purpose and once again Ethan was blatantly pushed over in the box and once again it went unpunished. And after a couple of half chances, one by Watkins that he put narrowly wide from close in on goal, and another by Sergi, where with more match sharpness he might have either had a better shot or a better cross from the right, it was Ethan who finally drew a very good save from Davies in the dying embers of this disappointing game.

I’m sure there will be many theories as to why we finally dropped three points and various views on how it might have been avoided, along the lines of “if only we’d started with x instead of y”, But none of us know what knocks this squad are carrying as a result of the last seven games and only Thomas and the back room team are in a position to balance inevitable tiredness against the need for certain individuals to be on the pitch. The one thing you couldn’t fault today was effort and it simply wasn’t enough on this occasion. Stoke were strong and ultimately too strong for us.
Eight games unbeaten is an extraordinary achievement in this most competitive of leagues, seven in the last few hectic weeks, and it is a tribute to the pressure put on WBA that they started to falter. We are still in the game, with two more chances to gain that promotion, next Wednesday and the play-offs. Four days rest and time to analyse this rare off day should see us bounce back for the game against Barnsley, a game still possibly the last one to be played at Griffin Park.