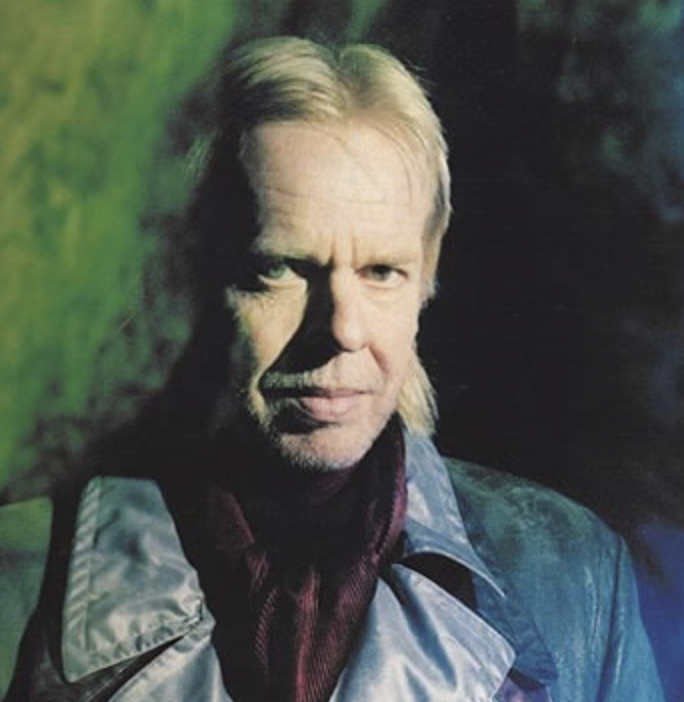 RICK REVEALS ‘I WANTED TO OWN THE BEES’

Rock music legend and third-generation Bees fan Rick Wakeman CBE has revealed to Bees United that he offered to buy Brentford back in the 1970s but was rebuffed by the then owners..
Share |

Rick Wakeman told the Griffin Park Grapevine message board in 2020 that he had once offered to pay to use the Griffin Park roof as an advertising platform for a record company. But now in an interview with BU to mark his recent CBE  Rick says his investors actually wanted to go further and buy the whole club in order to control the roof space.

The story of how Rick nearly became the owner of the Bees goes back to 1976 when professional soccer was just starting in America and Rick was playing concerts there regularly. His record company was Atlantic Records which was owned by the Turkish-American brothers, Nesuhi and Ahmet Ertegun, who had  bought the New York Cosmos franchise. Rick takes up the story: “the Erteguns said to their artists ‘why don’t you buy a club’. So  some of us bought the Philadelphia Fury franchise . My job was to help sign the players.We came to England and bought Alan Ball, Peter Osgood,Terry Mancini. and others.

“Then one day in 1976 I was in Toronto playing with ‘Yes’ and Nesuhi Ertegun, who really knew his football, asked to see me.  He said ’You have associations with Brentford don’t you. I want you to buy the club’. I said ’what?’ . He said ‘I think the grounds in England are tired, they are old and they are dangerous’. He was so right. He said ‘I hate to say it but Griffin Park is one of them, it is a tinderbox waiting to happen. But if you buy it I will give you a million dollars to start with’, which was a fortune back then, ‘and you can assemble what you want’.

“I said why do you want to do this?’ He said ‘what I want is the roof. I want ‘Warners Welcomes You to Britain’ on the flight path to Heathrow’. He owned the Warner Music Group. He said ‘That’s what I want and we will pay every year to keep the roof.That way you can keep Brentford out of any financial difficulties.You could probably bring enough good players to buy your way out of that division.” Brentford were then in the Fourth Division.  “Nesuhi wanted me to sit on the board as their representative”.

“I was very excited, got it all in writing and went to the Brentford board of the time, and made a presentation. But they clearly didn’t like this long-haired rock and roller and I was told ‘Do you think we are some kind of cheap advertising hoarding? We are a professional football club’.I was sent out with a flea in my ear.

“Nesuhi foresaw what would happen in football, the stadium disasters, the involvement of big companies, he was way ahead of his time. A couple of seasons later that same Brentford board leased the roof to KLM for an absolute pittance compared to what Nesuhi Ertegun was offering . It rattled in my throat for quite a long time.” 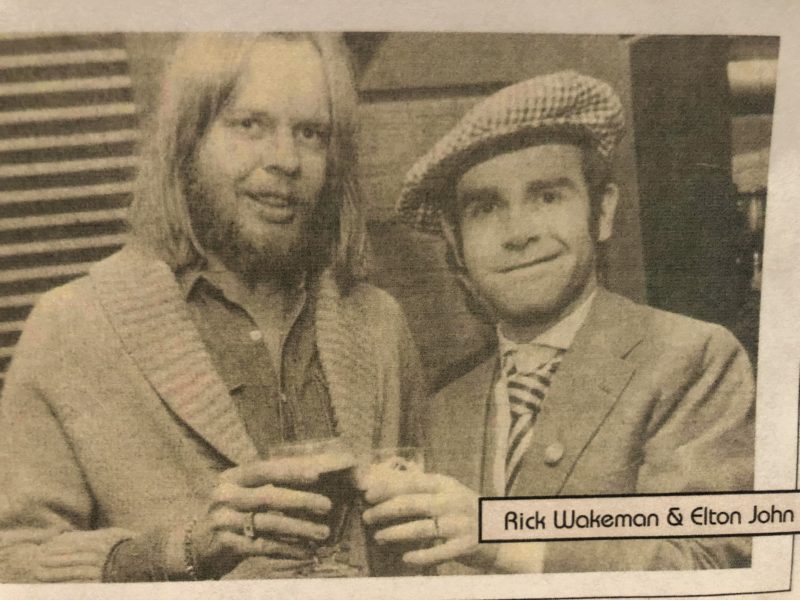 A few years later Rick became a Brentford director but not an owner. “It was a really bizarre time. Brentford was then a yo-yo club between the third and the fourth divisions, I had became a Vice-President which I was very proud to be.Then I moved to Switzerland, living in Montreux, I was a friend of Brentford director Dan Tana and he called me up and said ‘Rick you’ve just been voted onto the Board of Directors’. I went ‘wow’, it was a childhood dream but in retrospect I should have said that’s very kind of you but now is not the right time. I was going through a phenomenally expensive divorce and living in Switzerland going to games wasn’t exactly a case of I’ll just pop round to Griffin Park. It was a big mistake. I flew over for some games and board meetings for about a year but I had to resign. I sadly walked away from something I should never have walked into in the first place.”

Despite these two unsuccessful brushes with Brentford hierarchies Rick, who was born in Perivale and educated at Drayton Manor School, has remained a staunch supporter of the club since he first went to a game at Griffin Park.

“My dad and his father were both Brentford supporters, and they lived in a little place in Hammersmith and they used to walk to Griffin Park for the games. One Saturday when I was five and we were living in Sudbury my Mum told me she had knitted me a red and white bobble hat and scarf. She said you can wear this today because your dad is taking you to Brentford.There were no merchandise shops then, your mum knitted you everything. My dad drove me to the ground in his old 1938 Morris Eight, the ground seemed huge back then and it held about 30,000 people.”

His father sent him through the junior turnstile and told him to wait the other side. “There were a lot of people and I couldn’t see my dad for love or money. I got shoved down the front, somebody gave me a packet of Percy Dalton peanuts, and I semi-forgot about my dad. I watched the game, these were the days of Jim Towers and Gerry Francis, Ken Coote and Gerry Cakebread. At half-time there was an announcement over the tannoy, it was a but blurry and I vaguely heard my name mentioned. I didn’t think anything about it and watched the second half.

“At the end the man on the tannoy said ;’ Will Richard Wakeman go to the General Manager’s office where his father is waiting for him’. When we were reunited my dad was furious. I said ;’I watched the game’ and he said ‘well that’s more than I bloody did’.

When we got home my mum said ‘Hello Cyril, how did they get on’. He replied ‘ask your bloody son, I missed the game’.That was the start of it all. I must have 500 programmes dating back to 1953.

“My Dad got us season tickets and that was fantastic. He would tell me about the glory days of the First Division”. But Cyril Wakeman, joined by his son, witnessed the slide down the leagues to the bottom tier. This was one of the lowest points in the club’s history. ‘It was really gutting when we were relegated down to the Fourth Division in 1962 but we had a team that would have graced the Second Division with Johnny Brooks, Billy McAdams, John Dick, Mel Scott, Chick Brodie”. Brentford were promoted back as champions of the 1962-3 season. “ I remember going to the last game of the season against Workington, we needed 6 goals to make a hundred goals in that season and at half-time we were four-up, we were taking Workington apart .There were 17,000 people there for a Fourth Division game which was astonishing. In the second-half it all went terribly wrong,Workington scored three goals, we didn’t score any more and we hung on for a 4-3 win. Everybody ran on the pitch at the end to celebrate promotion and we stood in front of players in the stand. It really was a most wonderful time. One of the things I remember really well and I still have it somewhere was the local paper, the Middlesex County Times, and on the back page the next week it was a picture of the Brentford squad and there was a headline ‘Destination Fame’. I cut it out and it was on my bedroom wall for years.That was 1963 so it has taken nearly 60 years for that prophesy to come true.Whoever wrote that was a bit slow, but he was right.”

Rick has a truly extraordinary memory for games from that period. As an example take this match in 1963: “I can remember a Tuesday evening we were playing Wrexham and I can remember the gate, 12,000 people which was the lowest gate that season. Brentford had just bought Dai Ward from Watford and they won 9-nil. It was an absolute slaughter. I can remember the newspaper report saying lowest crowd watches biggest win’. What our fact check showed was that Rick has got almost all the details right. 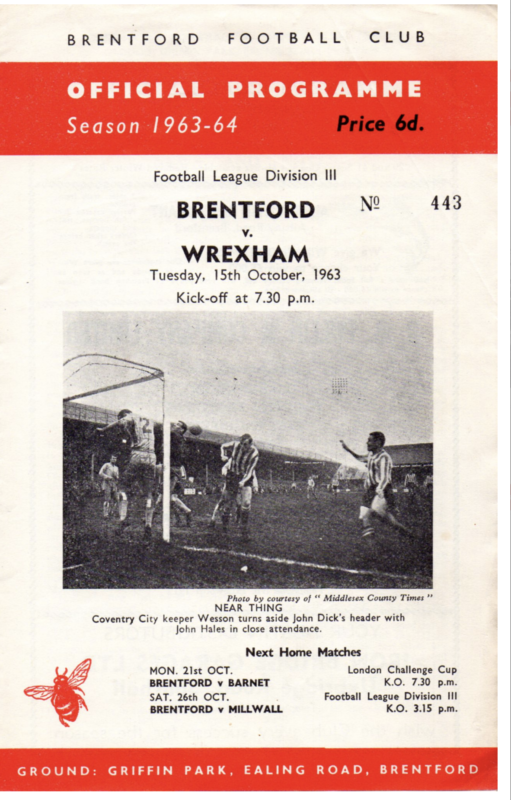 The programme for the 1963 game: Brentford 9 Wrexham 0

“Throughout my years of going since 1953 I’ve seen some periods of time when the football was what my dad used to call ’head in hands’.” When he moved into tax exile Rick decided it was “a bloody long way to go from the Isle of Man to Griffin Park” and started going to Manchester City who at that time had gone down to the third tier of football. “ I discovered that Brentford was so many people’s favourite second club, they had such a soft spot for Brentford. I realised ‘wait a minute, everybody loves Brentford’.” Now living and recording in Norfolk he follows the Bees on TV and not surprisingly for a fan who was on the terraces when things were at a low ebb he now celebrates Brentford’s return to the top tier.

“I watched the play-off final on TV, and I don’t think there’s any player in any division other than Ivan Toney who could have taken that penalty with that confidence. Once that went in Swansea heads started to go down. They looked like we did against Fulham.

“I had expected us to beat Fulham in the previous season and it is so disappointing when you just lose out but that’s where I take my hat off to all the players, when they came back their heads never dropped in what was such a strange season in so many ways. At one stage when we were top I thought we might pip Norwich but no team that goes through a season where everything goes absolutely right. I just loved our whole managerial ethos of never panicking, never complaining about the ref. That’s what made me proud of the team.”

In June this year  the news of his CBE honour was a “total and complete shock. I got a strange call from somebody claiming to be at the Cabinet Office I thought it was a hoax. Then I got an email saying Richard Christopher Wakeman was going to get  a CBE. I thought this is a gag, this is one of my mates pulling a flanker, thought nothing about it . Then I got another call and I thought ‘hold on maybe there is something in this’.It was nice to get it for my services over nearly 60 years for music. COVID means there will be a huge delay in going to the Palace to collect it, so I will probably get it when I’m 90.”