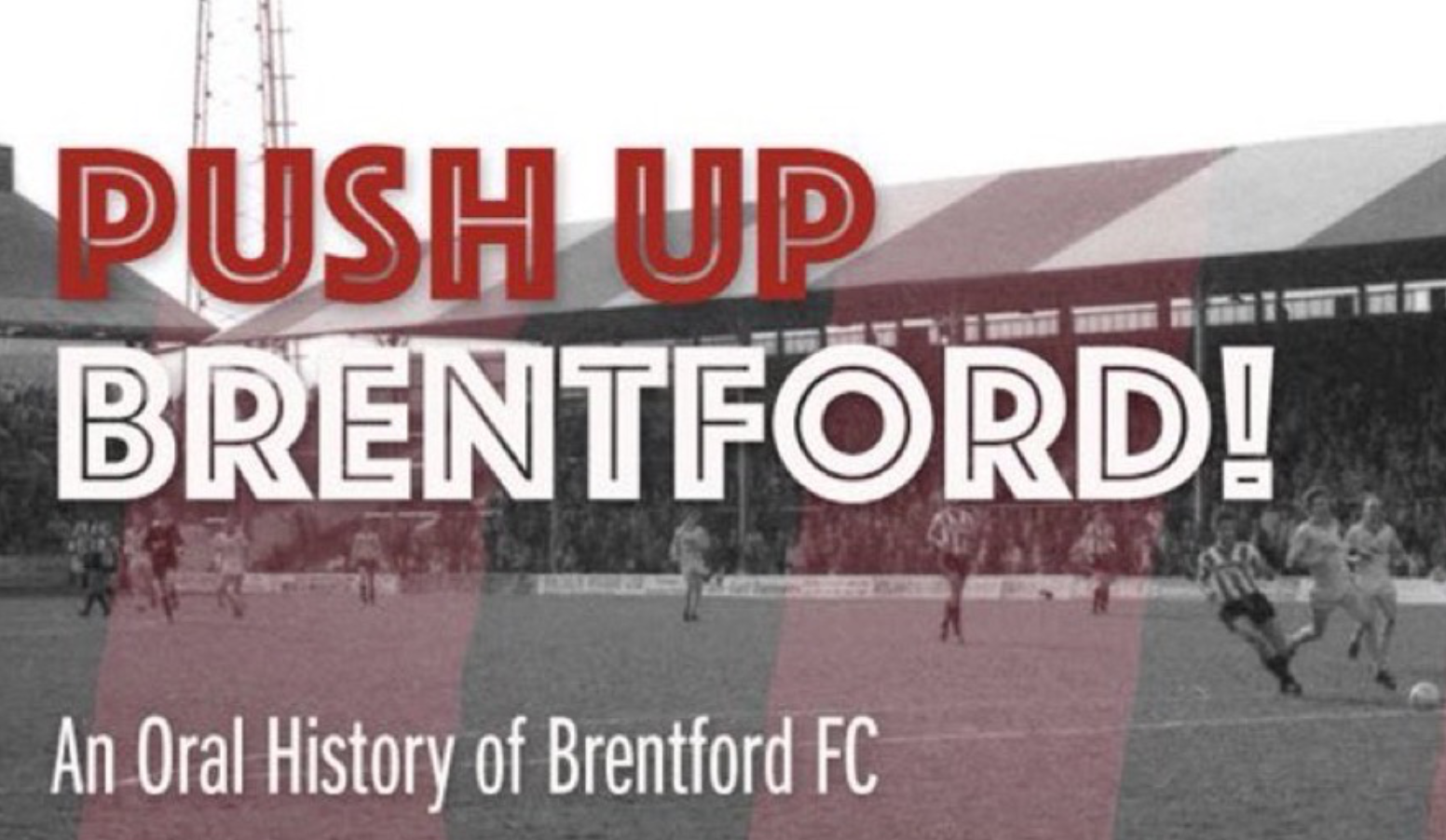 PUSH UP BRENTFORD! FILM-MAKERS PUSH ON

Bees fans have had to stop filming interviews for their oral history but the lockdown has made them even more creative.
Share |
more 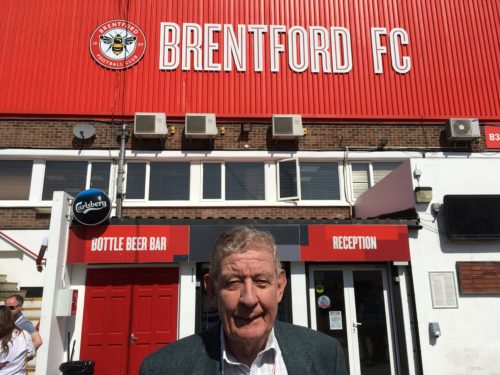 It is 75 years since Tony Sceats first visited Griffin Park and for many of them his rallying cry ‘Push Up Brentford’ rang out across the New Road stand. He’s now 83, living on the Isle of Wight with ill health which has made it difficult for him to get to games in recent years. But ‘Push Up Brentford!’ has become the name of a very special project which is bringing together Bees fans of all generations.

It is the idea of Bees supporter Sav Kyriacou. Sav will be a familiar name to regular listeners to the Brentford fans podcast Beesotted. He and colleague Matthew Rosenberg had a background in participation work with community groups, volunteers and schools, but they were also oral historians, capturing people’s experiences and memories on video and audio. They combined their interests by founding digital:works a charity that works with communities, providing training and creative help  to produce arts and media projects. On their website you can see the documentaries they have made about everything from the history of brewery workers in West London to the stories of Commonwealth immigrants and World War Two evacuees. These are often funded by grants from the National Lottery Heritage Fund or from a museum or archive.

A grant from the Heritage Fund helped Sav launch ‘Push Up Brentford!’ as ‘an oral history of Brentford Football Club at a time when it is about to move from its Griffin Park ground, home to the club since 1904’. The project has the support of Brentford FC, Brentford Community Sports Trust, Chiswick Library Archives and the Brentford History Group. 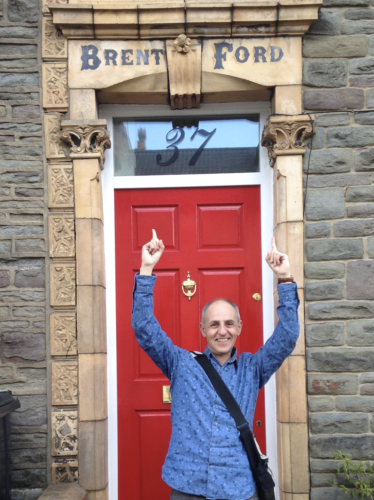 Sav put together a team of 16 volunteers ranging in age from 16 to 73 and in the club’s Boardroom and Learning Zone he trained them in technical and interviewing skills. They began interviewing Brentford fans and former players and managers about their memories of their club. 21 interviews into the 24 they planned to do, the interviewing has had to come to a halt because of the COVID-19 lockdown. On their website they posted the bad news but with a positive footnote;

‘The interviews have ended for now. We did have a few more lined up but because of interview spaces shutting down and social distancing being a pre-requisite we found it impossible it continue right now. The good news is that we have plenty of wonderful interviews which we can now use to edit for some podcasts and the film’.

Sav explains how they are using the pause to good effect: ‘Normally in our projects there are two options – you can watch a film on our website which is about 45 minutes long or you can listen to the original full interviews which can be 30-40 hours of interviews. By us creating podcasts  you now have an extra middle option, you can listen to about three and a half hours of content with more edited interviews than in the film but without having to touch the full 30-40 hours. This option has only come up because of the lockdown. If it wasn’t for the lockdown we wouldn’t be doing it’.

Meantime Sav and Matthew can also get on with editing the film but it has to be done remotely without meeting up. ‘He’s got half the interviews and I’ve got the other half. At some point we’ll get together and put it all together into one film’.

The volunteers can take a break after 22 hours of interviewing.To keep the technical standards constant Sav and Matthew set up the cameras each time but then it was over to the volunteers to do the sound recording and the actual interviewing. ‘Everybody loves doing the interviews’ says Sav. 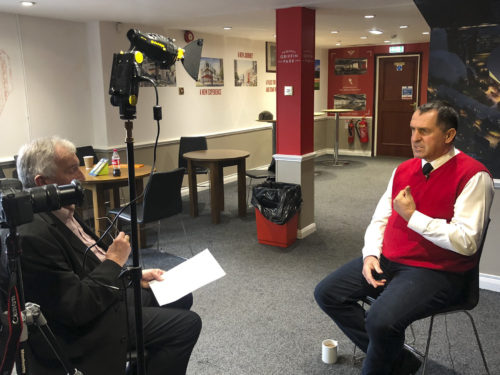 ‘What I like about this project is that it is basically Brentford fans talking to Brentford fans, players and managers’. One example is what Sav calls a ‘marathon interview with some bloke in a tank top’.  Volunteer Brian Godfrey interviewed Martin Allen. ‘Brian was just awestruck, two hours of Martin Allen. There were lots of fantastic stories about his time as manager of Brentford. There was a young volunteer who was doing the sound recording who said ‘I could have sat there listening to him for days’. It’s lovely putting two interests together, the volunteers are really interested in interviewing people and they are interested in the people they are interviewing’.

Sav also explains how the volunteers selected the interviewees; ‘what we wanted was people who’d got more than one interesting thing to talk about, another string to their bow. For instance, Gemma Teale talked about being a fan but also about how she started LGBeeTs. Mel Collins talked about the blind supporters scheme but because he’s also been a local councillor he could talk about the ABeeC campaign in May 2002’. Bees fans organised a political party to support plans for a new community stadium. Their candidates stood in most wards in the Hounslow Council elections and one of them, Luke Kirton, won a Brentford area seat on the council.

Sav cites Jim Levack as another example; ‘Jim reported for the Middlesex Chronicle for 20 years but in addition his family go back three or four generations. And Brian Burgess, obviously, can talk about Bees United and the Community Sports Trust’. 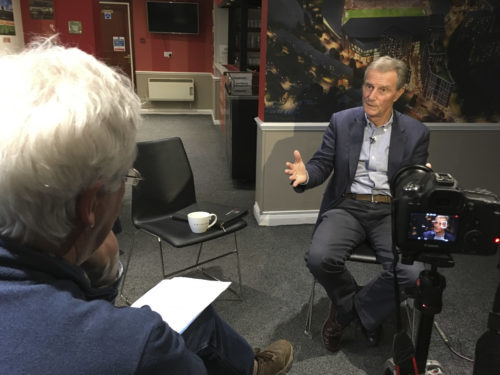 Sav says he plans to complete the remaining interviews when things get back to normal and although these will come too late to include in the film and podcasts eventually visitors to the Push Up Brentford! site will be able to listen to everything that he and his volunteers have recorded and put in their digital can. 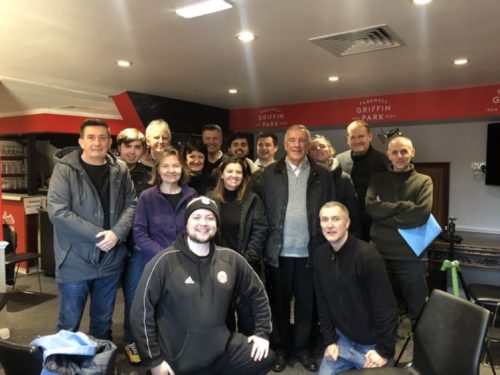 An audio interview with Sav himself done by Dave Lane of Beesotted is at https://beesotted.com/push-up-brentford/ and the six podcasts of interviews will be available at https://audioboom.com/channel/Beesotted