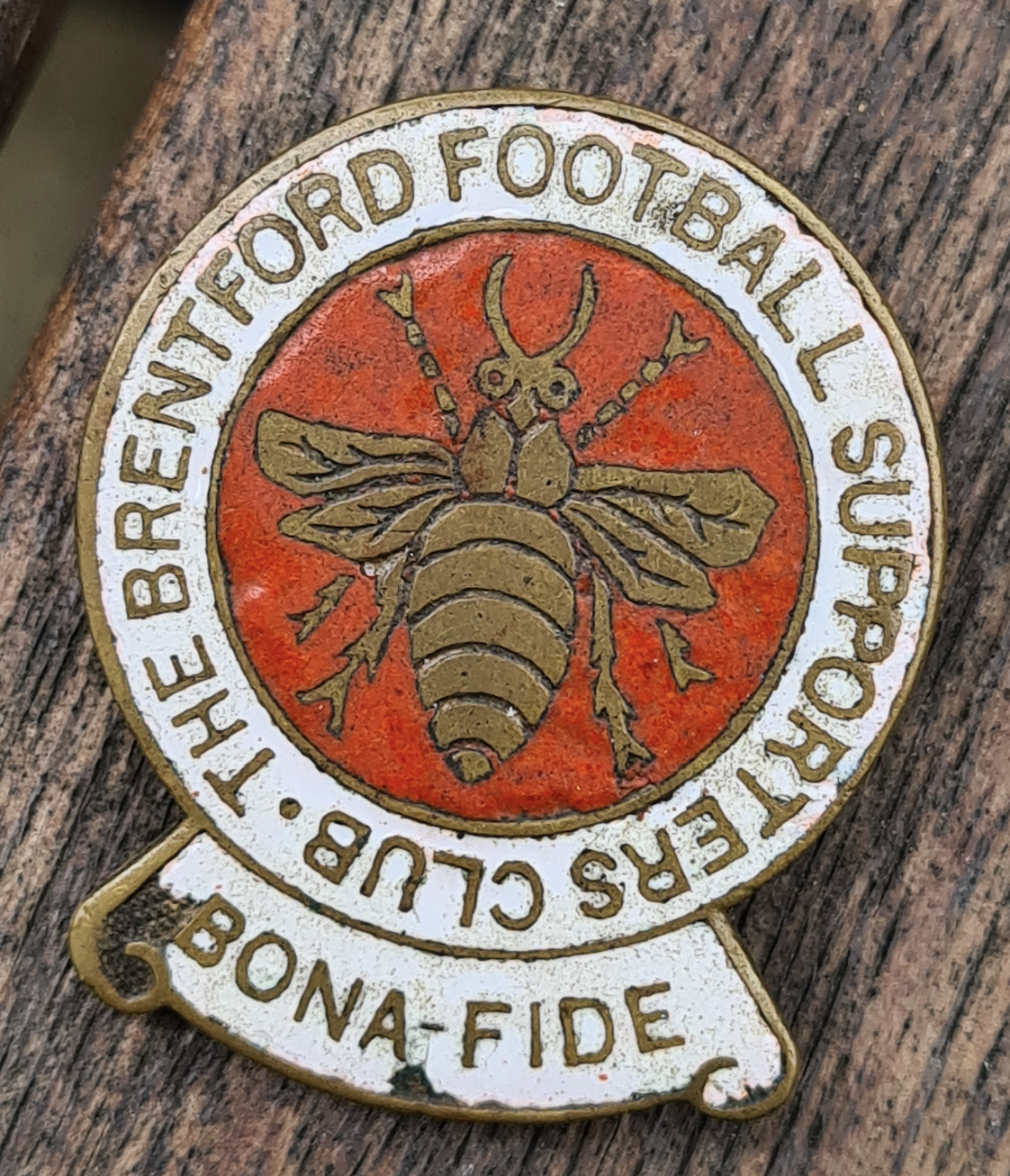 ‘OUR CENTURY AS A BEES FAMILY’

In the latest of our series prompted by a Bees family heirloom,season-ticket holder Sharon Adlem tells the extraordinary story of how her family have supported Brentford for a century.
Share |
more

My grandfather, Cyril Baker, lived in Eccleston Road, West Ealing, with six brothers, two sisters and his parents. Nine of them, though perhaps never all at once. Their father was a tea dealer and accountant but the family fell upon hard times when he died just before the birth of his youngest son Hubert, affectionately known as Bunnie.

The children grew up with few material possessions but they were blessed with a love of the outdoors and sport. Soon after the turn of the century the boys made their first journey to Griffin Park. We think that it might have been in the very earliest years of the stadium’s life, around 1904 when Cyril, was ten years old. 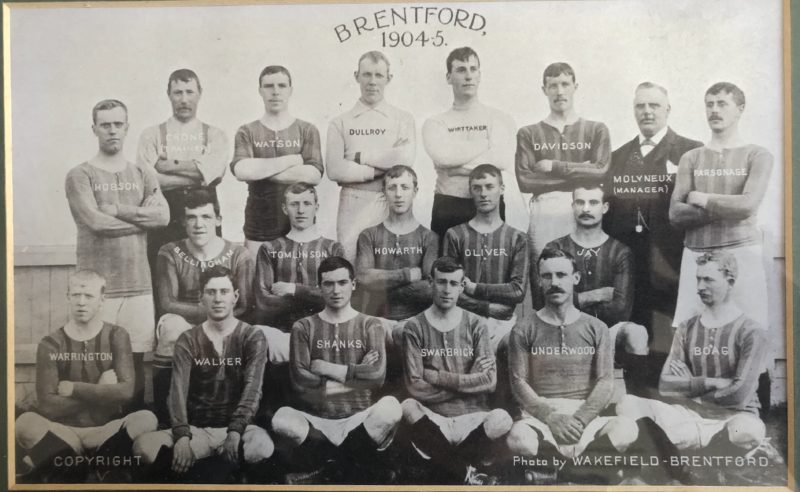 The Brentford players of 1904-5 that the Baker boys would have watched.

In all likelihood they walked there past Victorian town houses and London brick cottages, cutting through unmade lanes and across fields until they stopped just short of the river and bustling docks. Perhaps they stopped at The Plough Inn or the Globe for brandy or porter – though some of the boys owned Temperance Society badges so maybe they lingered at Edwards Dairy instead.

Bunnie was football mad. In his late teens he co-founded a sports society that we think was called Drayton Athletic Club. Our photos suggest that the ‘Athletics’ club was largely about soccer. 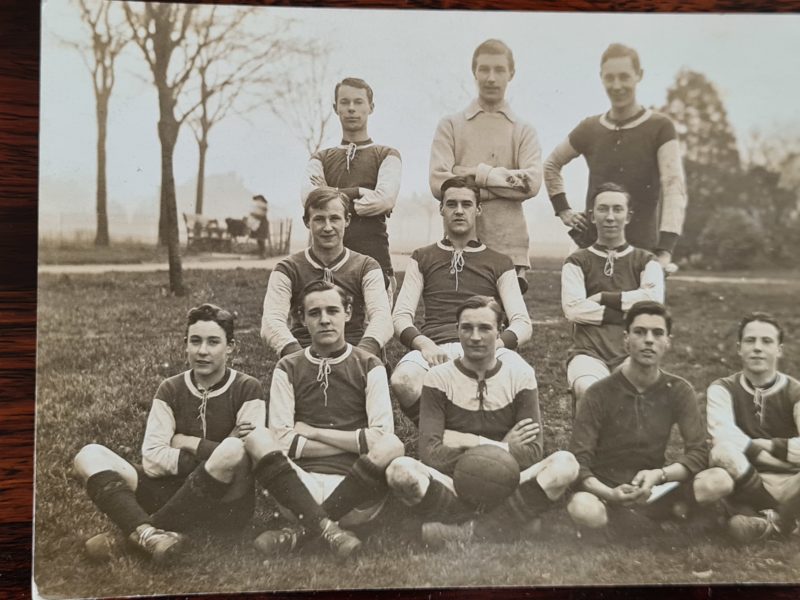 Bunnie features in all the pictures, surrounded by team-mates in sturdy leather boots, shirts laced at the collar and wool stockings and flanked by an entourage of gentlemen in three piece suits. 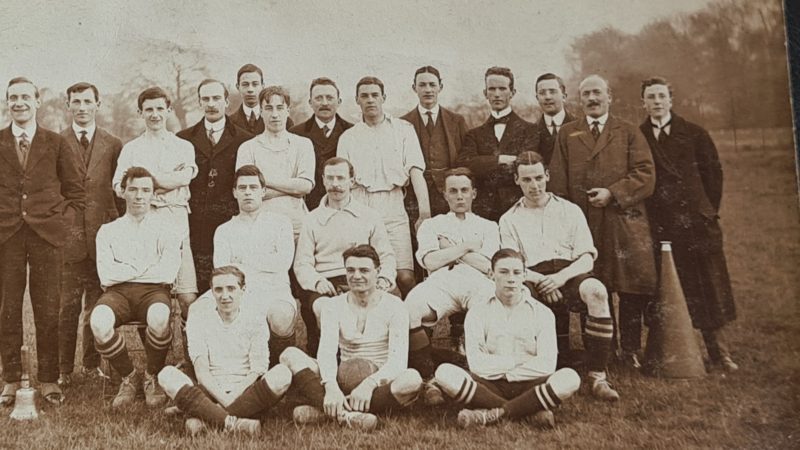 Bunnie is back right of those in white.

By this time six of the boys were working for the Great Western Railway and they had a passion for steam engines which endures today in our family. They played cricket and bowls at the GWR Sports Club in Vallis Way. Then came the Great War. Each Baker Boy volunteered and, whether by luck or judgement, all joined different regiments. All bar Cyril. Cyril’s childhood friend Harold had somehow enlisted in an Australian regiment and served in Gallipoli. He was home on leave in Eccleston Road. We suspect Harold did not altogether meet with approval from Cyril’s family. One day he took Cyril for a ride through Ealing in the sidecar of his motor bike. I suppose that, after the horrors of the Dardanelles, Castlebar Hill didn’t offer much of a challenge to Harold and he may have been a little cavalier in his attention to road safety. An accident occurred and Cyril was taken to hospital with a broken leg which meant that he was not accepted into the armed forces. Good old Harold I say. 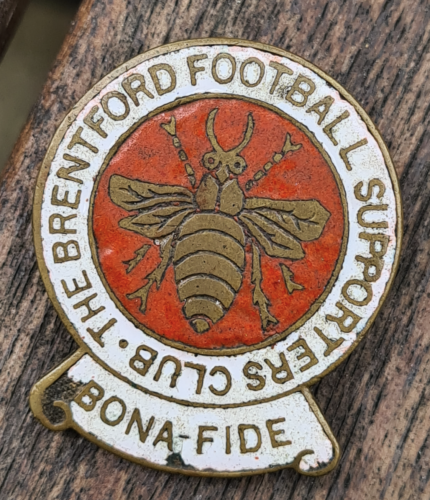 The supporter’s badge that belonged to Sharon’s grandfather Cyril Baker.

With hindsight we count ourselves lucky that six of the seven brothers made it through. Only the baby, football-mad Bunnie, did not return. 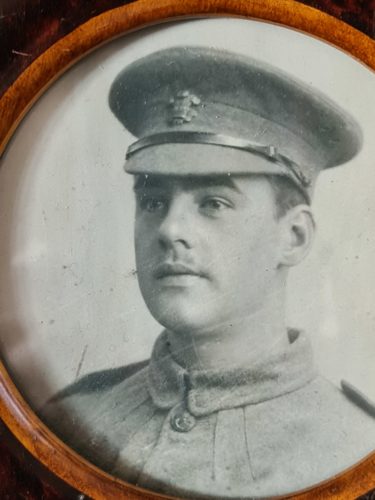 He lost his life in 1917 in the Third Battle of Ypres a few months after arriving in Flanders. Heavy shell fire destroyed part of the battlefield burial ground and for a while the family did not know where he lay. It was left to one of his brothers, Stan, to discover that he had been reburied in Railway Dugouts War Cemetery in Zillebeke, Belgium.He is also commemorated on a family gravestone in Kensington and Chelsea cemetery, Hanwell, and on the GWR Roll of Honour on Paddington Station.

Bunnie’s grave at a British military cemetery in Belgium 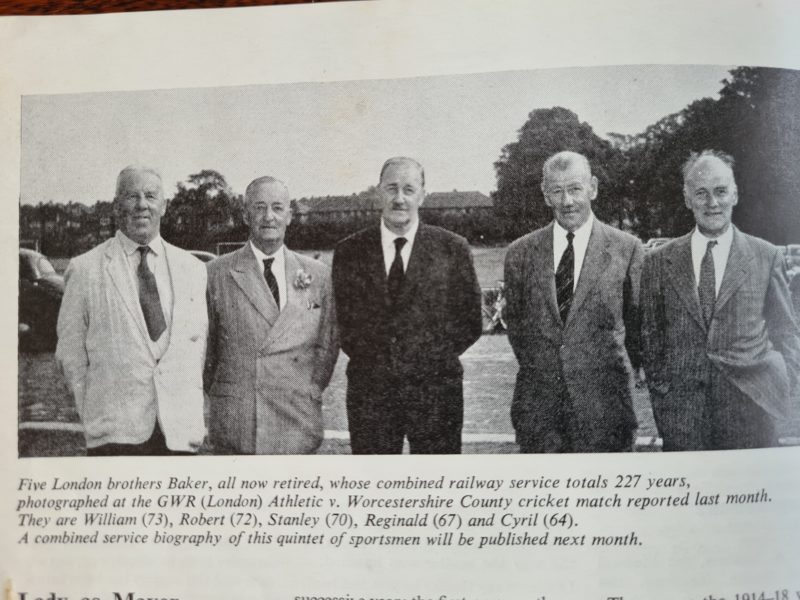 The remaining Baker boys at what was the GWR ground and is now Ealing Trailfinders Rugby Club.

The Baker Boys married and dispersed. Only sister Edith was left in the house in Eccleston where she took in lodgers, including Graham, a lad up from the West Country who married Cyril’s daughter Iris, thereby narrowly escaping the awful fate of being a Swindon supporter. Thus a second generation of Bakers, my parents Graham and Iris and her brothers Tony and Clive, followed the family footsteps to Griffin Park. And yes, they really did pay to leave their bikes in the gardens of enterprising Brentford folk.

Brentford were sliding down the divisions but still drew big crowds to those shallow-stepped, open terraces. My mum and her brothers talked fondly of their heroes of those days – Hill, Crozier, Harper, Greenwood, Hopkins – at family gatherings for decades afterwards.

In 1960 Graham died suddenly leaving Iris to bring up two small children – my sister Cathy and me – and later that year Cyril was killed in a motor accident. There was no time and little money to spend on football, and probably no heart for it either. Until the spring of 1967.

Uncle Clive came to our house and said simply “I think it’s time we got you two along to Griffin Park”. Cathy remembers her first visit clearly. Exeter City, an evening under floodlights, the Royal Oak End. Hooked.

We migrated to a spot with a better view on New Road and adopted our ‘own’ crush barrier. Though I was mortified to have to queue under a sign that read BOYS ENTRANCE it wasn’t long before I’d bought the rosette, knitted the scarf and had a black and white photo of Alan Hawley taped inside my desk lid. Iris and Tony soon returned and we befriended three lovely people who stood close by, Joyce and Bill Neate and Betty.

Cathy and I were the third generation, watching fourth division football. One substitute, one bag of monkey nuts, one ladies’ lavatory with a big hole in the wall, gates of 5,000. Wreathed in cigarette smoke and diesel fumes we watched our own heroes – Phillips, Ross, Nelmes, Gelson, Higgie – take on Bradford Park Avenue, York City and Barrow. The pitch was bald by Christmas and at half time the ‘crowds’ on Ealing Road and the Royal Oak swapped ends by charging along the rain-filled ditch at the bottom of the New Road terrace.

Early in the 70s one of the Baker Boys, possibly the last, died. At the funeral Clive and Tony met Phil. He said he was Stan’s son. He was a Brentford supporter. Soon Phil was coming to games with us. The quietest, gentlest and most good-natured of men, he might be remembered for brief spasms of wild and vitriolic high-pitched shrieking  when Brentford displeased him. His children, our second cousins, came though curiously often chose to stand in a different part of the ground.

How I wish they could see Brentford now. The Brothers, my Mum and Dad, Clive, Tony, Phil. They would not believe their eyes. And how I’d love to go back in time and watch them at Griffin Park. Today, a fourth generation of our family comes to watch the Bees, my daughters and Phil’s grandchildren.

I tried to explain how it felt to be leaving Griffin Park.

It’s like…it’s like putting our family home up for sale, the house where my grandparents lived, where they brought up their children. Where our parents raised us…and where my home is now.

Actually, I realised, that’s not what it was ‘like’. That’s how it really was.