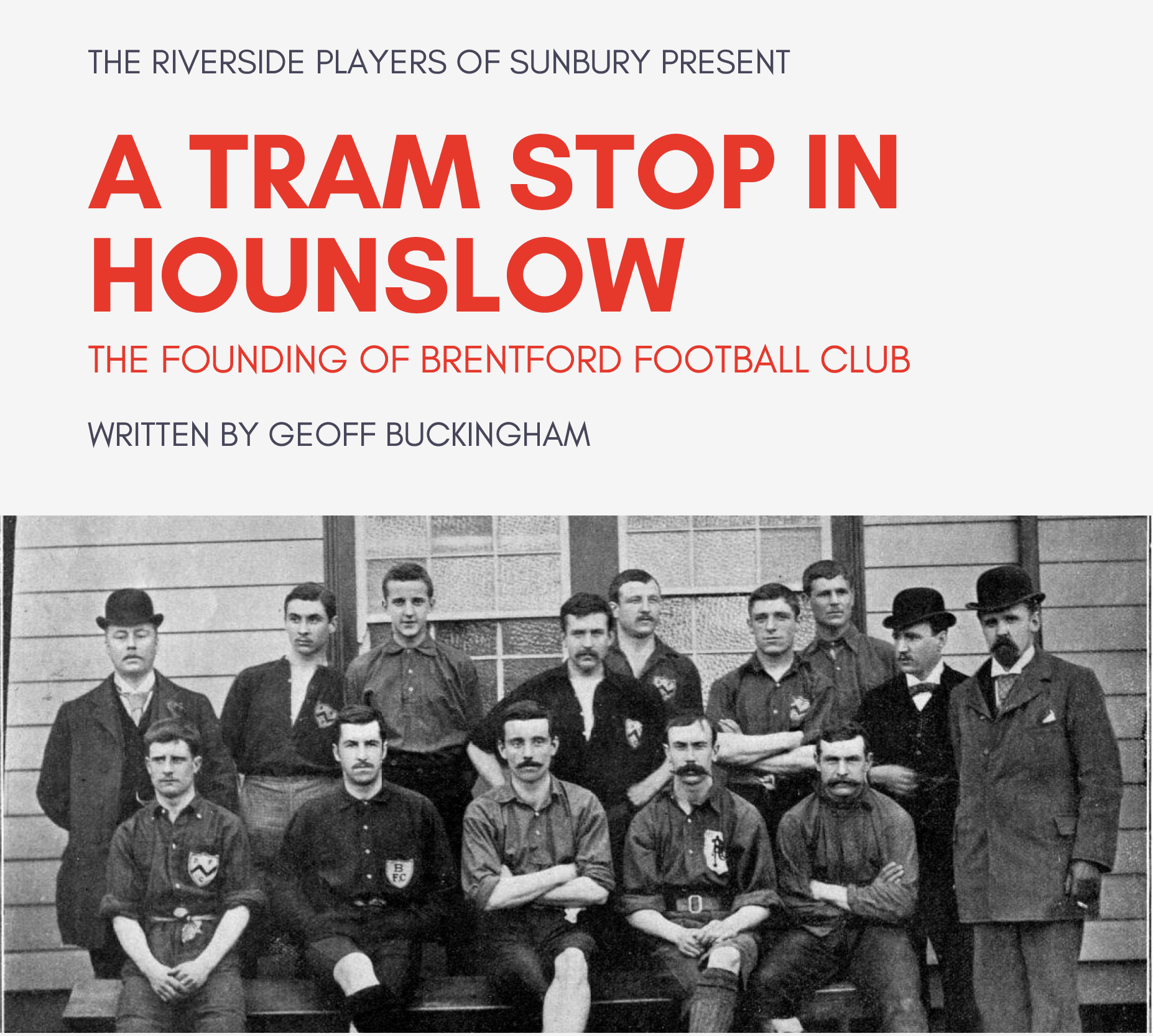 NOW THERE’S A PLAY ABOUT BRENTFORD

There’ve been books, a TV documentary, podcasts and an exhibition but now there’s a play too about the history of Brentford FC. And again it is the work a fan. Geoff Buckingham, one of the founders of Bees United, has written ‘A TRAM STOP IN HOUNSLOW-The Founding Of Brentford Football Club’.
Share |
more

On 16 October 1889 Brentford Rowing Club held a meeting to discuss starting a branch of the Club dedicated to a sport other than rowing. It’s known that the debate was a close call between football or rugby. ‘A Tram Stop in Hounslow -The Founding of Brentford Football Club’ is a dramatisation of the events of that day based on research by the author Geoff Buckingham. The title is a re-working of the phrase ‘A Bus Stop in Hounslow’ which was at first a jibe at Brentford from QPR fans  but has now been proudly adopted by Brentford supporters.

For Geoff, one of the Brentford historians who first discovered that Brentford Football Club was founded in 1889 and not 1888 as the Club had thought, the play was a pandemic lock-down project written initially as a hobby. ‘Then some Brentford fans urged me to get it presented on stage somewhere. We put the idea to the  London Museum of Water and Steam which is close to where the 1889 meeting took place and they were keen on it as a community fund-raiser.They found slots on Sunday 6 March”.

Geoff put a group of actors together from drama groups he is involved with and they will perform the play in what he calls ‘radio-style’. ‘Basically the cast stand up with a script in hand and deliver it”. Rehearsals start soon.

“We think there will be things that come out that will be new to most people and we hope the play will be entertaining. We pay tribute not only to those who founded the club but to all those who have done so much for the club over all the years since, culminating in promotion to the Premier League. There are sad things that come out of the play but also inspirational themes”.

Geoff, a lifelong Brentford FC fan and Bees United member, hopes his play will appeal to those who follow The Bees, as well as those who love the history of the town. It examines the characters who were involved in the club at that time, their motives, and the arguments for and against starting a football club. It also looks at the social conditions in the town back  in 1889.. “Brentford was a tough place to live in. There was the gasworks, the docks, the railway lines, the soap works, the water works, the saw mills – a lot of industry and a lot of horses as well, People worked hard and lived in difficult housing conditions.

Geoff hopes the performances will also boost the coffers of the Museum, which hosts the ‘Farewell Griffin Park’ exhibition. There will be two performances, one at 5.30pm and another at 7.30pm. Refreshments will be available, and there will also be a limited number of parking spaces.

Tickets for the performances on Sunday 6 March are available online LINK TO https://lmws.digitickets.co.uk/event-tickets/38265?catID=38320&) or directly from the London Museum of Water and Steam.