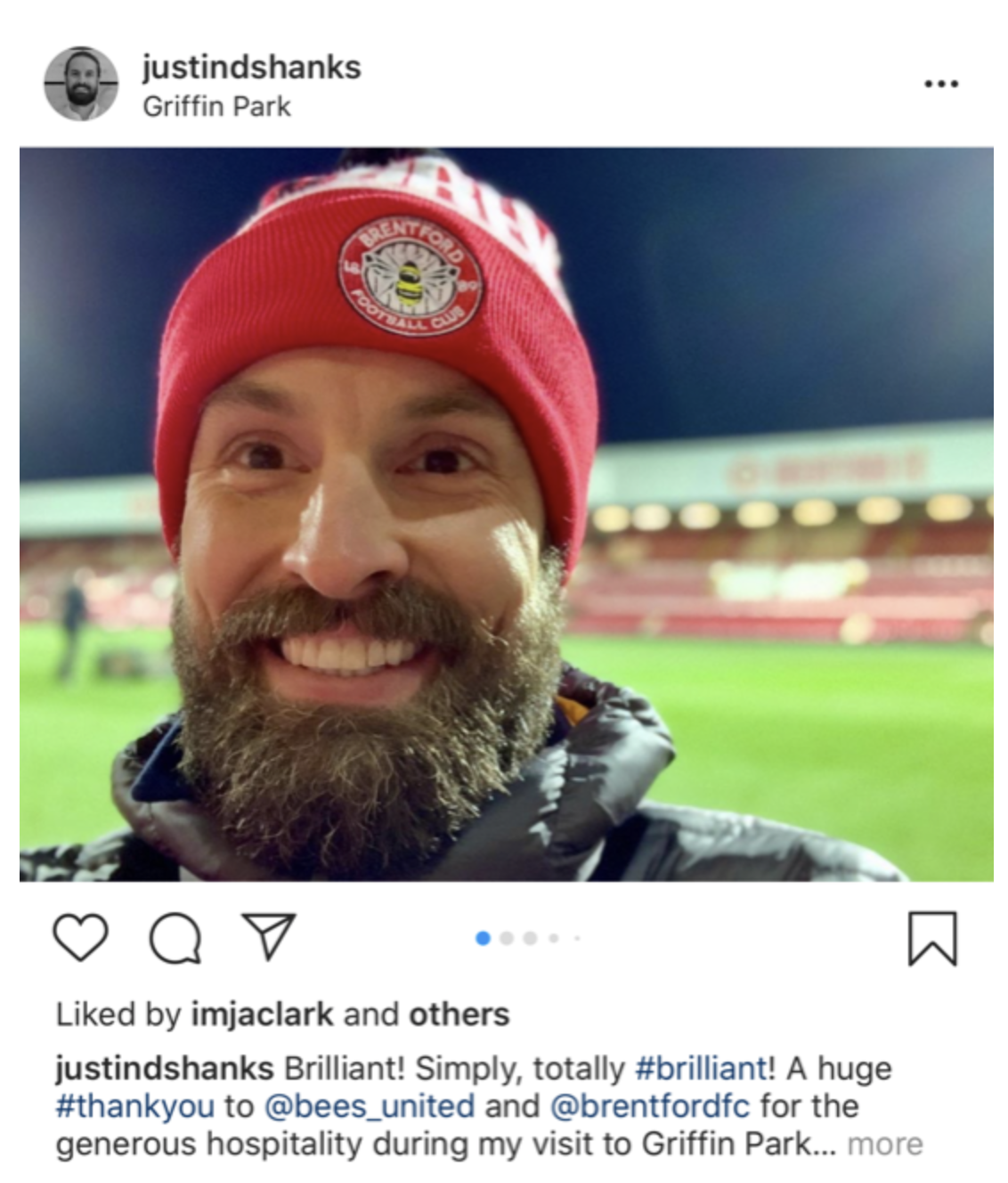 Justin Shanks is a Bees United member who lives in Montana,USA. During a recent visit to London he spent an afternoon as our guest in the Boardroom and Directors Box. When he returned home he sent us this article about his visit and how an American academic came to be a Bees fan.
Share |

Growing up in as a football loving/playing youth during the 1980s and 1990s, I was among the cultural and sporting minority in America. In that post-NASL (first iteration), pre-MLS, and pre-internet era there was little coverage and reporting of football. I learned about football and footballing culture via books, movies, and writing reports for school (whenever the topic would allow a football focus). The information that I did find tended to (understandably) focus on big clubs and famous players in Europe. I had loads of options before me, but the selection process was quite daunting. I was empowered to select nearly any club, but which, and why?

I first learned of Brentford FC in the early 2000s when I read an article detailing the club’s financial hardship and subsequent takeover by Bees United. While the dire finances left many questions about the club, the ethos of the club and dedication of the supporters resonated with me (particularly at a time when the financial gap among clubs was growing increasingly apparent [e.g., Abramovich’s increasing power and spending and Chelsea’s rise to prominence in the early to mid 2000s]). In the intervening years, I kept tabs on Brentford as the club moved up and down League One, League Two, and finally back to the Championship.

During this time, I developed a growing interest in Championship football and the history/culture of smaller, more local clubs. Also, on a personal level, it is a bit of football supporter kismet that my wife’s maiden name (Byker [or historically Bijker]) is Dutch for “beekeeper” and my brother’s family are actual keepers of bees in California. My attention as a researcher and supporter turned more purposefully to Brentford when (in 2015) I read a photo essay and article detailing the matchday experience at (comparatively) humble and historical Griffin Park. The photos and words brilliantly captured the friendliness, history, and identity of Griffin Park, the club, and its community/supporters. The club’s engagement with the community as well as the community’s support for and investment in the club were so profoundly evident. I think this marks my proper transition to a full-fledged supporter of Brentford. Then came the crest redesign and announcement of a new stadium – all very exciting. So, I might not have generations worth of lineage that connect me with The Bees, but I have felt very welcome as a member of the club (thank in no small part to your excellent hospitality this past weekend) and look forward to enjoying the dynamic experience that comes with unflinchingly supporting a club. With a rich history, clear sense of club identity, and strong supporter engagement, it seems obvious that the future is very bright for Brentford FC! I’m thrilled to be a part of the club’s recent history and its future!

To be sure, I certainly enjoy following and talking about The Bees with passion — I identify with the history and ethos of our club in so many ways and consider myself fortunate to have stumbled upon the awesomeness that is Brentford FC. Nevertheless, my closet includes kits and scarves from various clubs around the world and I read football media and watch matches involving clubs across leagues and competitions. So, I am first and foremost an enthusiastic supporter of Brentford FC. More generally, I love football…be it Eredivisie, Scottish Cup, Champions League, international friendlies, or a derby between regional lower tier clubs — less to cheer for any one team, but more to enjoy the beauty of the game and its deep and ongoing connections with culture (both local and global).

I am very thankful that my conference travel aligned perfectly with the farewell season at Griffin Park and a home match! Please share my sincerest thanks with Ron and everyone at Bees United and Brentford FC. I look forward to returning to Brentford soon and bringing my wife and our son for a match at the new stadium. In the meantime, we will be cheering for The Bees from Montana!