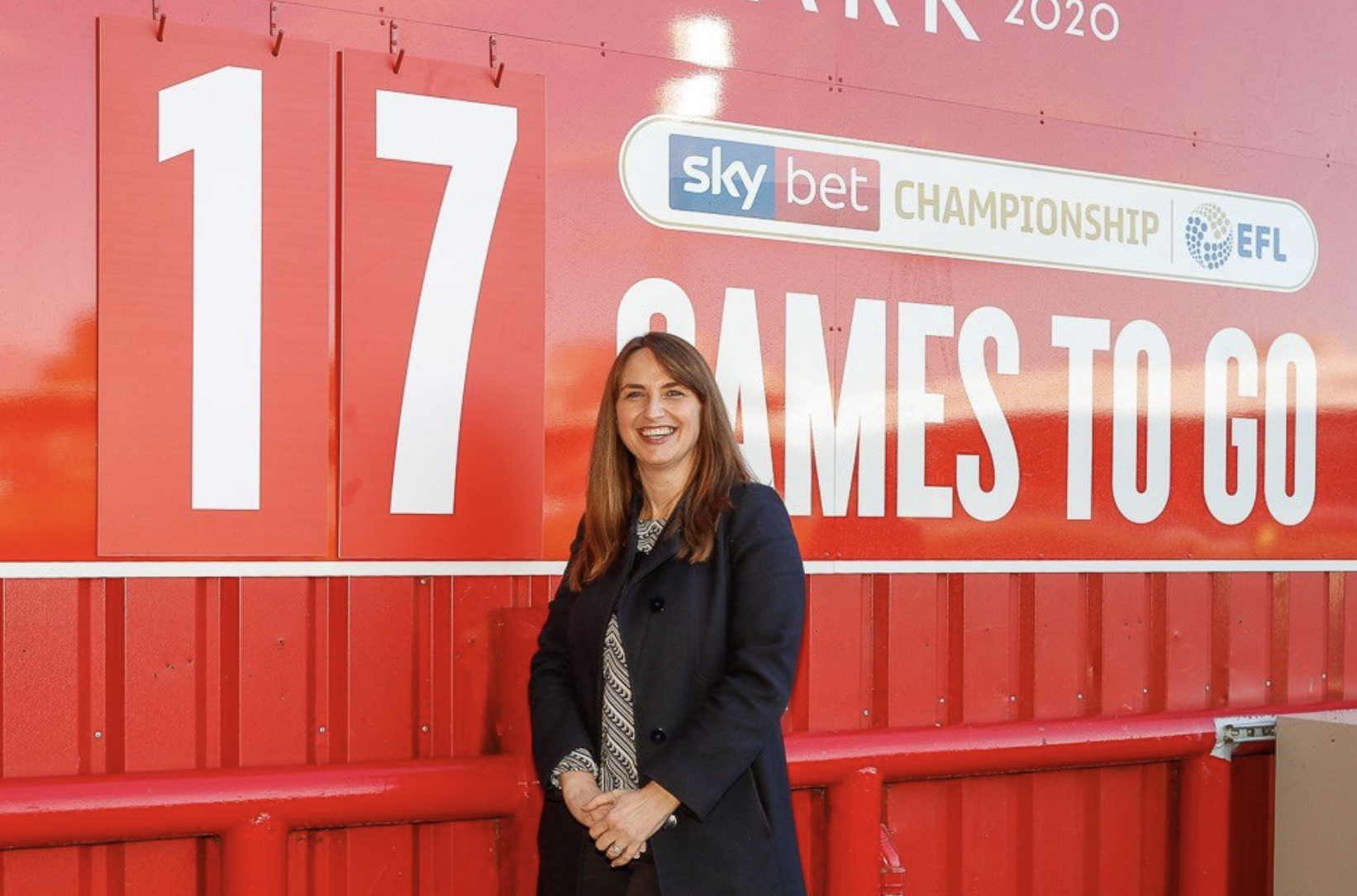 29 years ago, a teacher at Greenford High School sent a pupil to Brentford Football Club for a week’s work experience as an office junior. The teacher knew the 16-year-old girl liked sport, her father was a Spurs supporter who’d bought her a season-ticket. The problem was that she lived in Southall and didn’t know where Brentford FC was. So being an organised sort of girl she set off on a bus to find Griffin Park.

She was extremely nervous on her first day but felt very welcomed and a year later they asked her to come back for another week. Then “out of the blue I got a phone call offering me a permanent job in the office. I must have made a good cup of tea. I took the plunge and did it.”

Lisa Hall, as she was then, Lisa Skelhorn as she became, has now been Club Secretary for 18 years, has been recognised by the EFL for her long service and according to Brentford’s Co-Director of Football, Phil Giles, what stands out about Lisa is “her fantastic attitude, nothing is too much.”

The impact of the COVID-19 pandemic is a good example.  The ‘Return to Play Protocols’ are voluminous EFL documents which every club must complete and implement.  As well as sending these off to the EFL Lisa has also been doing a variety of extra roles.  For a time if you emailed emquiries@brentfordfc.com with a query, comment or complaint it was Lisa who replied to you.

She has been on the club’s full-time staff longer than anybody else. ‘Mr Brentford’ Peter Gilham has been the match day announcer since 1969 but Peter’s role was initially part-time, he joined the full-time staff as Commercial Manager in 1995, three years after Lisa.

As an office junior, then assistant to the Club Secretary Polly Kates, Lisa did more tea-making but also a host of administrative tasks, especially on match-day. “In those days we didn’t have computers, so everything was done by hand. I used to write the turnstile sheets for the operators, organise their cash floats and afterwards help count the cash and give out the crowd attendance figure.”

Lisa has one extraordinary memory from that era: “At the time there were only about ten staff in the office and because we were so busy due to our involvement in the play-offs some of the playing staff- Kevin Lock (Assistant Manager) Bob Booker (Youth Team Manager) and Kevin Burke used to come back to Griffin Park at lunchtime after training and make sandwiches for us all.”

Lisa was proving herself to be organised, diligent and efficient. “But I was never confident in those days. When Polly told me in 2002 she was leaving and that she would be putting my name forward to be Club Secretary I panicked and I didn’t think I could do it”.  The person who persuaded her she could do it was Luke Skelhorn, then her boyfriend. “It only took him 15 years to ask me to marry him.” Luke had just joined what became the Community Sports Trust as a qualified coach and has gone on to become the Operations Director. 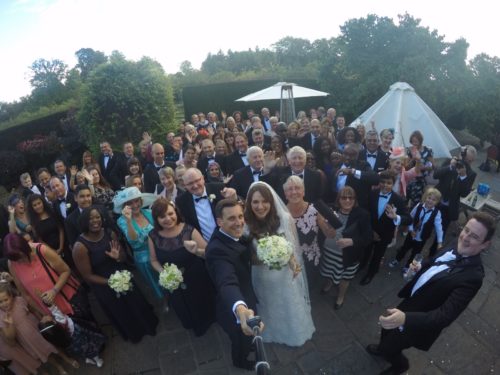 A wedding in the Brentford family. Luke and Lisa’s big day in 2016.

From the beginning Lisa got used to the ups and downs of football, “promotions, relegations, people coming and going, especially managers”. In her first year on the staff, in 1992, the Bees under Phil Holder had just been promoted to the second-tier as champions of what was then the Third Division however “it was tough times at the club…we had no money to spend on improving the squad and we were heading towards relegation. I still remember the fans shouting for the Board to sack the manager and sitting outside Braemar Court protesting after a game.” The Board duly sacked Holder.

“My first few experiences of managers/coaching staff leaving were hard, because you were saying goodbye to the people you have worked with. It’s difficult for all us when you are working with colleagues who are being criticised and booed….but I’ve learnt that’s part of football”.

Lisa has worked with several different owners: Martin Lange, Ron Noades, Bees United and now Matthew Benham. She remembers “the uncertainty when Bees United took over, the nervy times of will we get someone in, what would happen to the club’? But there have been more highs than lows. I’ve always felt the people that I worked with had the best interests of the club at heart.”

Lisa attends Board and Senior Leadership Team meetings, “If I think something is not right I will say it and I’ve been encouraged to do that.” 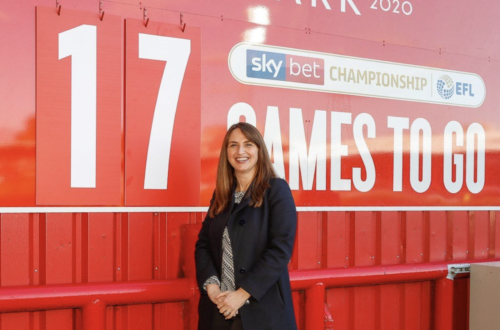 Like all Club Secretaries, Lisa finds it difficult to come up with a short explanation of what the job entails. “There’s the eligibility of players including contracts, transfer agreements; maintaining the efficiency of all football administration matters, and ensuring compliance for the Football Club with all governing body rules and regulations (i.e. EFL, The FA, UEFA and FIFA), plus the management of the players’ disciplinary records, Cup rules, liaison with other clubs etc.”

There’s also something called ‘whereabouts’ which is ensuring players make themselves available for doping controls with no advance notice. Phil Giles, her direct boss, adds that “the most important thing about any work colleague is attitude, application, contribution to the environment, willingness to do anything that’s needed even if not strictly their job spec.” Lisa passes that test with flying colours. 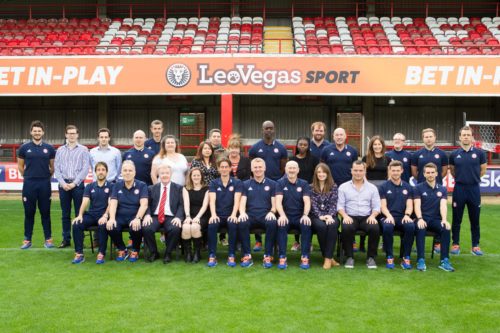 Lisa ,front row 4th from right, in a staff photo when Dean Smith was Head Coach.

Many people assume that when the season is finished it must get quiet. “No, it is extremely busy” says Lisa.  “Even on your days off you’re on call really.” The part of her summer work which has grown most is what we now call ‘player trading’. “Obviously I don’t negotiate player transfers/contracts, Phil and Rasmus do that, but I do all the correspondence and documentation with players, agents, clubs, the League and the FA.” Phil Giles says there’ve been some long hours and late finishes on transfer deadline days in January and August, but “Lisa never complains and the fact we have a close working relationship means that we work well as a team during what can be quite a stressful few hours!”

Last year it was decided to move Lisa’s main office to the Jersey Road training ground because that’s where most of the people she works with are based. “It’s a great place, it was hard to say good-bye to Griffin Park but I’m glad I’ve done it, I can now speak to the coaching staff face to face and anyone can just pop in and chat rather than send an email, which I think really helps improve working relationships.”

Phil says Lisa has made a big contribution to Jersey Road since moving there with colleague Claire Hiskett. “It’s a predominantly male environment and it’s nice to have a blend of different people working there, with different experiences and backgrounds.”

Lisa has given a careers talk at Brentford School for Girls encouraging pupils to work in sport. “I wanted to let them know that there are many roles women can do in football and I explained the role that I did and I wanted them to know there are lot of women club secretaries in football now. Looking back, I have asked myself if I have been treated differently because I am a woman. There have been occasions when I have been in a meeting with a lot of males and if they wanted more tea I always felt they would look towards me as a woman. I’ve always wondered if they would do that to a male club secretary. Having said that I don’t feel I’ve been treated harshly or differently in my time at Brentford.

“I see the club as my second family, I’ve grown up here and I’m still learning all the time and I enjoy being at work. I’ve been very lucky, I’ve been to Wembley and the Millennium Stadium for play-off finals, unfortunately I haven’t yet seen us win! I really do believe Brentford will make it into the Premier League, hopefully this season. The club has changed so much during my time here but the future with Matthew’s support is really bright.   We have a brand new stadium next season that we are all so excited about, but also a great team on and off field! Up the Bees!”