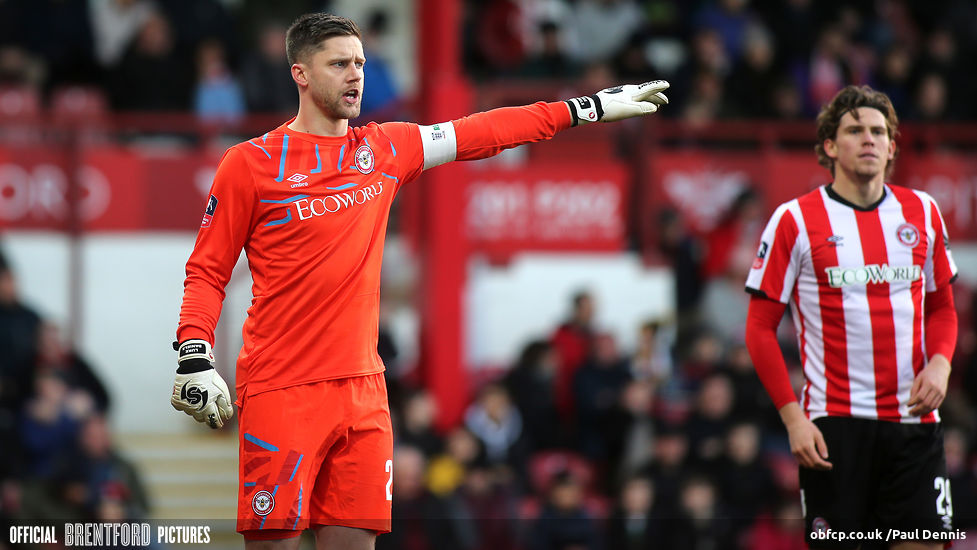 IN PRAISE OF LUKE DANIELS

Ahead of the FA Cup game against Leicester, how 'one of our leaders' is our number two goalkeeper.
Share |

When Brentford Head Coach Thomas Frank was asked to list his most influential players off the pitch the first two names didn’t surprise Bees fans: Captain Pontus Jansson and deputy Henrik Dalsgaard. It was the third name that took a moment in sink in; Luke Daniels. Yes that Luke Daniels, our number two goalkeeper. The goodwill seems mutual, Luke says ‘I love being here, I enjoy coming in every morning’

Confirmation of the high regard in which Luke is held in the club came when he was named captain for the FA Cup game against Stoke, in which kept a clean sheet, and was awarded a new contract through to the end of next season and possibly beyond. The chances are that he will be in goal for the Cup game against Leicester at Griffin Park on Saturday.

It is sometimes said in football that you have to be crazy to be a goalkeeper but really crazy to be a goalkeeper who rarely keeps goal. Nobody knows that better than Luke Daniels. Cast your memory back to 2nd October 2018 and the home game against Birmingham City. After regular keeper Daniel Bentley had made mistakes our Bees United match report recorded that Dean Smith ‘made three changes from the Reading game; the most striking was his decision to drop Bentley to the bench and replace him with Daniels, making his first Championship start of the season. Smith said later Bentley was ‘gutted’ but understood’.

A few days later in a televised match at Leeds Luke held his place but was judged by some fans to have been at fault when a Leeds player called Pontus Jansson out-jumped the Bees defence to head an equaliser in the final minutes. According to our BU match report ‘Daniels was left wondering whether he had just lost that shirt’.So it turned out.

By the time of the next league match Dean Smith had gone to Aston Villa and Thomas Frank was in charge. He made the decision to bring back Bentley who was judged to have served his time on the naughty step. Even though many fans felt there was little to choose between the two keepers Daniels went back to the number two slot. When a new Head Coach makes a potentially career-changing decision like that a player is likely to feel ‘disappointed’ and Luke apparently was, but he was also determined. He tweeted ‘tough times never last but tough people do!’ He gave an interview in which he said it was difficult to come to terms with Thomas’s decision: “Obviously I came here to play football and when that doesn’t happen it’s not great for me. I’m not someone who’s happy sitting here, not playing football. I came here, moved from Manchester and left my family at home to play football, and that’s what I wanted to do. On New Year’s Eve he tweeted a picture of his wife and two children with the caption; ‘Can’t wait to see the back of 2018, and roll into 2019 with these three’.

In January 2019 the customary goalkeeper rotation for FA Cup games meant he was back for that extraordinary cup tie at Barnet and the replay plus the extraordinarily disappointing next round at Swansea. When Daniel James outran the whole Brentford team and smashed it past Daniels that looked like the end of the keeper’s season. But an injury to Daniel Bentley a month later gave Luke the chance of ten more league starts before the end of the season.

Rather than sink back into disappointment again it seems that becoming the number two to an undoubtedly better keeper was a positive turning point for Luke . Instead of comparing himself with Bentley and what he possibly saw as the injustice of the club’s preference, his new attitude for the 2019-2020 season is best summed up in his quote on signing a new contract; ‘ I feel I’m really pushing David who’s done really well since the start of the season. I feel like I’m there or thereabouts and ready if needed’. He tweeted; ‘love being part of a club I genuinely believe is going places’.

Thomas Frank went out of his way to praise Daniels.“Luke is a top goalkeeper, he pushes David Raya every single day in training and one of the reasons that David has had such a good season is the way that Luke both tests him and helps him in training and on match days. Luke is also one of our leaders. Both in the dressing room and on the training pitch he shows the experience he has and is constantly demanding the best from those around him. That has been a big factor for us this season.’

Luke’s family are still based in the North of England and they often travel to Brentford’s away games in the north whether or not he’s in the starting lime up. You can sometimes seeing him playing with his kids in the car park afterwards. At 32 he’s a player whose career began in the Manchester United Academy and has included stops as varied as Motherwell, Shrewsbury, Tranmere and Rochdale plus games for England Under-19. He now faces what could be the high point so far, being ‘one of our leaders’ as we fight for a chance of the Premiership.