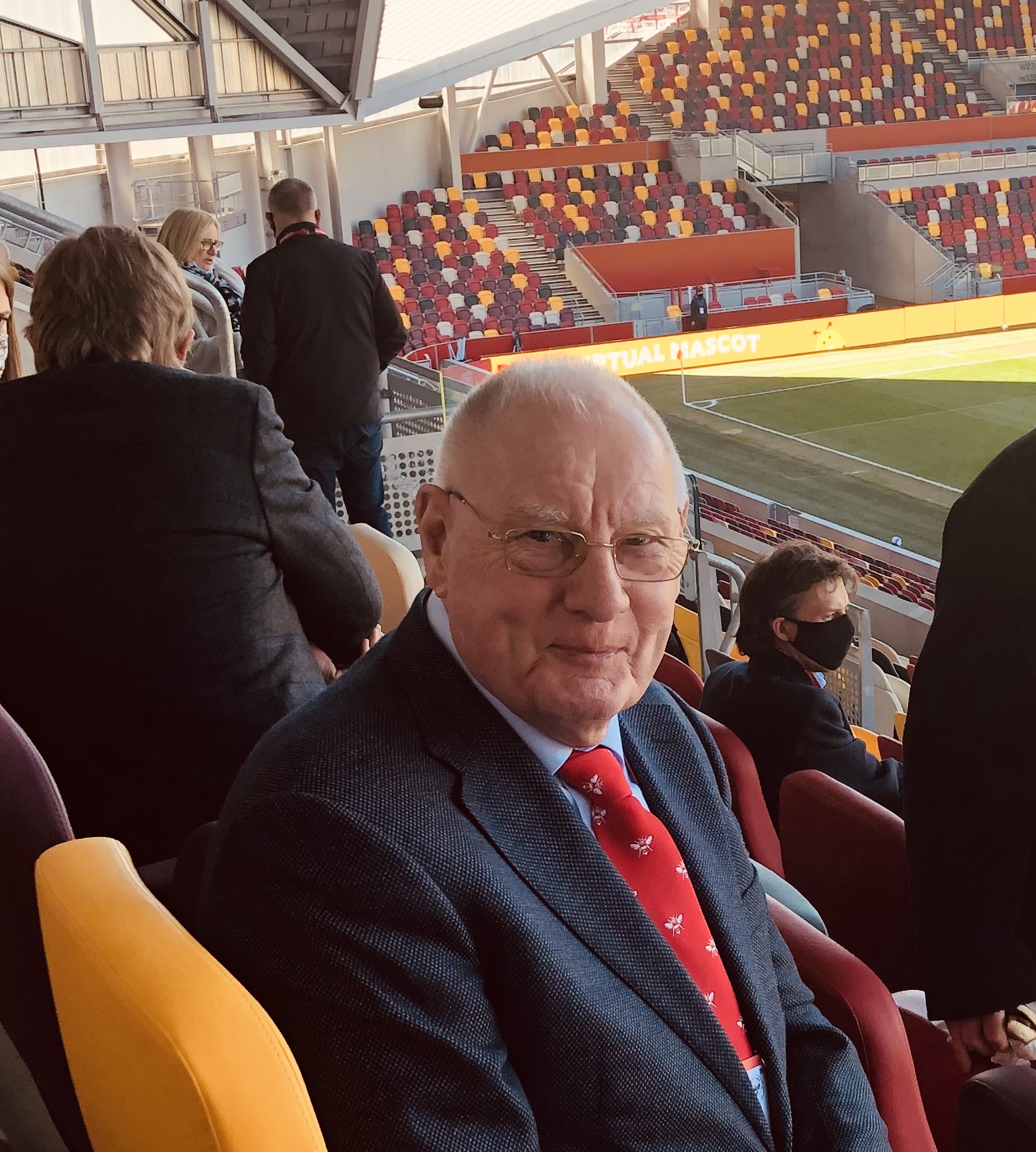 ‘I HAD TO STUMP UP 25 GRAND RIGHT AWAY’ JOHN HERTING REMEMBERS THE WAY IT WAS.

It is nearly 30 years since John Herting first got involved as a director of Brentford and he saw more than 20 managers come and go in his time. He has no regrets about the passing of old style Brentford.
Share |
more

He first went to Griffin Park in the 1940s, was a club director through the ‘ducking and diving’ days of David Webb and Ron Noades right up until the Matthew Benham take-over, he sponsored the team shirts when nobody else would and to this day he’s an advertiser on the electronic boards around the new stadium.

So the name Herting as in ‘Hertings, First for Fixings’ may be familiar to Bees fans but its Chairman, John Herting, has never sought the limelight at Brentford. When he first became a director in 1992 he was described as ‘the big mystery man’. An article in the programme for a Division Two game in November 2003 is headlined; ‘John Herting, the mystery football ‘nut’ unlocks his secrets’. But there’s no photograph of him.

However don’t mistake this for John not wanting to have to have a word in an occasional ear. The article called him a ‘tough-speaking elder statesman’.  He once told a manager at a board meeting ‘what you’re really telling us is that you don’t know what you are doing. I think the best thing you can do is leave the club now’. But perhaps the key moment in his time at the top of Brentford was when when deliberately gave up a say in the way the club was run and helped hand control to Matthew Benham.

The John Herting Story began after the Second World War when Fred Herting used to set off for Bees games from his home near Ealing Broadway with his schoolboy son John . Fred was a merchant supplying equipment to engineers and John joined the family firm when he left school at 15. When Fred passed away in 1969, John, by then aged 27, says he ‘was thrown into moving the business forward’. Which is something of an understatement. The most recent accounts of F. P Herting and Son PLC’ show that the son has developed it into a ‘supplier of fixings and ironmongery to the construction industry’ with a turnover of over £30 million a year and an average annual profit before tax in recent years of £5 million. He still runs it as a family business with his wife and two sons on his board.

John’s business link to the Bees first came about through one of the suppliers to his company who was on the board at Brentford. The chairman at the time was Martin Lange and among the other directors was the California restaurant owner Dan Tana. In 1992 they invited him onto the board and he went with the team to the Anglo-Italian Cup games at Cesena and Ascoli. The Bees were defeated in the final by Derby County. John didn’t have to invest in the club at that point because “I was producing revenue for the club, paying for advertising and getting suppliers to advertise. I brought in my own money and other people’s money. I was then on the board for the next 21 years”.

He had a front row boardroom seat during the controversial reigns of David Webb and Ron Noades. We put it to John that history had not been kind to the reputations of either of them, was there anything to say in their defence? John did not rush to defend them. “Both saw Griffin Park as a piece of property rather than past of a football club. It was the only asset the company had. You had no team in terms of any value”. 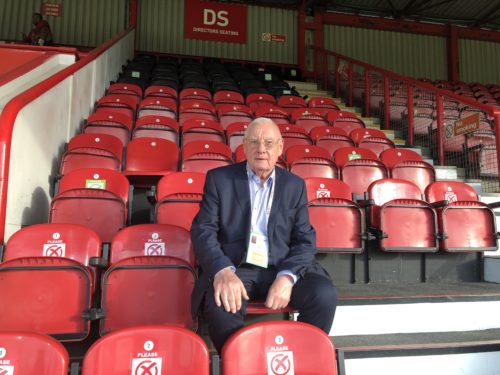 John Herting in his favourite seat in the directors box at Griffin Park.

David Webb, then best known as a former Chelseas player, was brought in by Martin Lange in 1993 as a manager but then moved up to the boardroom and in a shareholding restructure John Herting paid £250,000 for Lange’s shares, effective giving John a 10% stake in the club. “Webby was an absolute ducker and diver of the first order. He knew a lot of people in football. Webby used to stay here at my house from time to time to avoid having to drive to and from his home in Southend. When he appointed Micky Adams as manager the deal was done in my sitting room”.

When the club was sold to Ron Noades in 1998 ‘all sorts of people came onto the board. Noades owned golf courses and for a time Brentford board meetings were held at one at Godstone In Surrey. “I didn’t get on with Ron Noades, he was a dreadful person” says John..

His memories go back to a very different time in Brentford’s history. “I was asked to look after Martin Allen while he was manager. I will never forget it, I was in bed on a Sunday night, the phone rang and it was Martin on the line. He said  ‘I’ve just signed Paul Merson’. I said ‘No you haven’t’. Martin said ‘He’ll get £1,800 quid a week, he will come on for the last 15 minutes and he will score goals. that’s what he does. I’ve signed him and he’s coming in tomorrow’.I  said ‘he’ s not. We haven’t got £1,800 a week, forget it’. He got really angry with me, he threw the phone down and I never heard from him for about a week”. 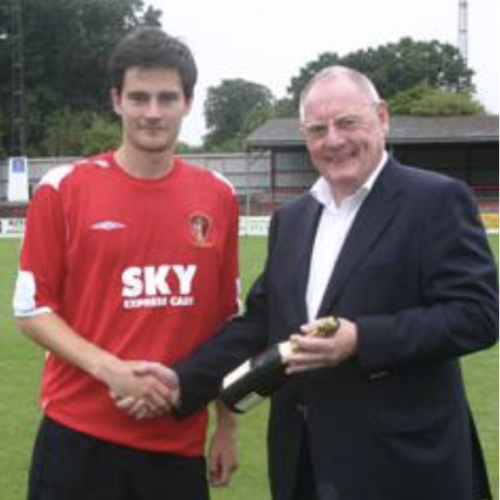 “During the times when we had no money my son Paul volunteered to  become the unofficial kit man. I think that if things had carried on like that ultimately we would probably have gone bust. There was no investment whatsoever and we lurched from season to season”.

In 2006 Bees United, then a fans pressure group, became majority owners and John believes this ‘enabled the club to wrest itself away from people like Mr Noades. BU steadied the ship. Brian Burgess rang me up and asked if I agreed that it would be a good idea if Greg Dyke became the club chairman. I said that is an excellent idea”.  But money was always a problem. “One year we couldn’t find a shirt sponsor, nobody else would do it so I said ‘I will have to do it’. 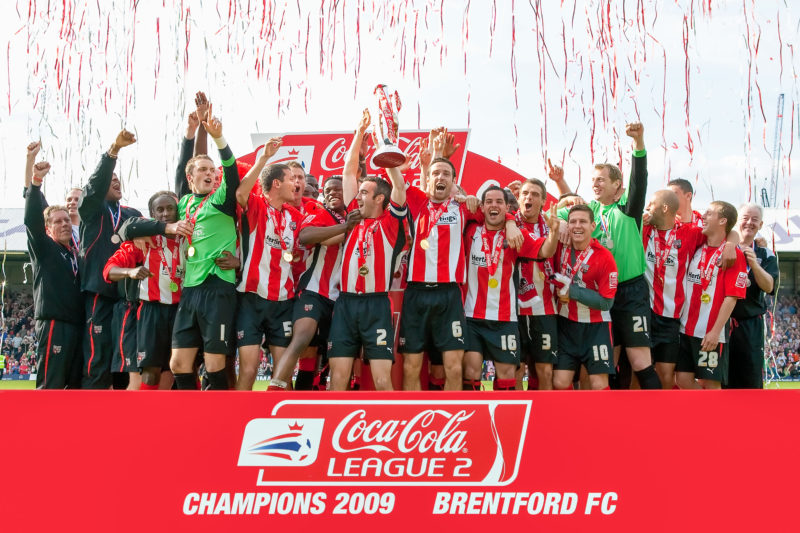 When everyone wore Hertings. Kevin O’Connor and the 2008-9 League 2 Champions, shirts sponsored by Hertings.

Then one day I was flying back from Spain and the phone rang the minute I got off the aircraft. The Finance Director of BU said ‘John, John I must have £25,000 now or the revenue are going to shut us down. So I had to stump up 25 grand right away”.

On the upsides John particularly enjoyed the away trips – ’some of them were unreal’- and recalls a long drive to Barrow for an FA Cup game in 2008. “A director couldn’t restart his car after a long lunch break in Cheshire. He’d put petrol in a diesel car’. A taxi and a train ride got them to Barrow in time, then ‘the goalkeeper Ben Hamer got sent off for handball outside the area, we lost and came back on the team bus arriving home around dawn’.

In 2009 Bees United members approved a deal with Matthew Benham in which he invested and had an option to become the owner in 2014. In fact the deal was speeded up and in 2012 Matthew became the sole owner with the minority shareholders exiting. The money they had put into the club had helped it survive but their stakes were arguably of little value by now.

‘David Merritt who was the BU chairman rang me up and said ‘unless you give me your shares Matthew’s takeover, known as ‘Project Gekko’, isn’t going to happen. My quarter of a million pounds was still in so I actually gave BU my ten per cent free of charge. I didn’t want to hold up the take-over, I didn’t want to be the big bad wolf. I wasn’t in it to make any money, far from it. This enabled BU to go ahead with what was called Project Gecko to enable Matthew to own the shares with BU getting a golden share’. John was among those who left the board and became Associate Directors of the club. 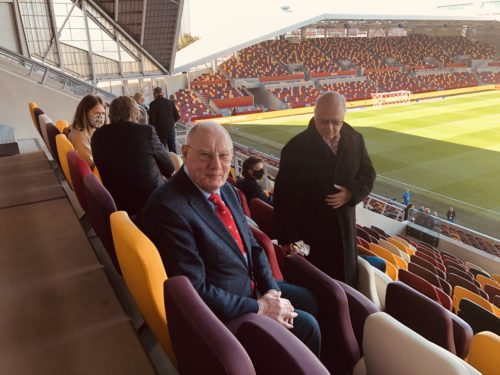 Some Associate Directors have been able to attend games in the new stadium. Left is John Herting, right is former Chairman Eddie Rogers.

That article in the November 2003 Division Two programme ends with a quote from John: ‘we have got to keep the club going. Remember I am first and foremost a supporter and as a supporter I am optimistic about the future’. But even he never imagined that Brentford would one day be among the top clubs in the EFL Championship. ‘Without Matthew’s investment and the team he has got around him absolutely not. It was never going to happen’.

He has no regrets at never becoming Chairman of Brentford FC at some point. ‘I was running my own business so I couldn’t give Brentford 100% attention. What the club needed was somebody to get hold of it in an almost full time manner. The only person who has done this is Matthew Benham through investment. It is not only about the players, it is about what he’s done, the training ground, all the people who are employed, it goes on and on. When I was involved we were running the entire playing squad on £1.35 million. Now we are in a totally different ball game’.