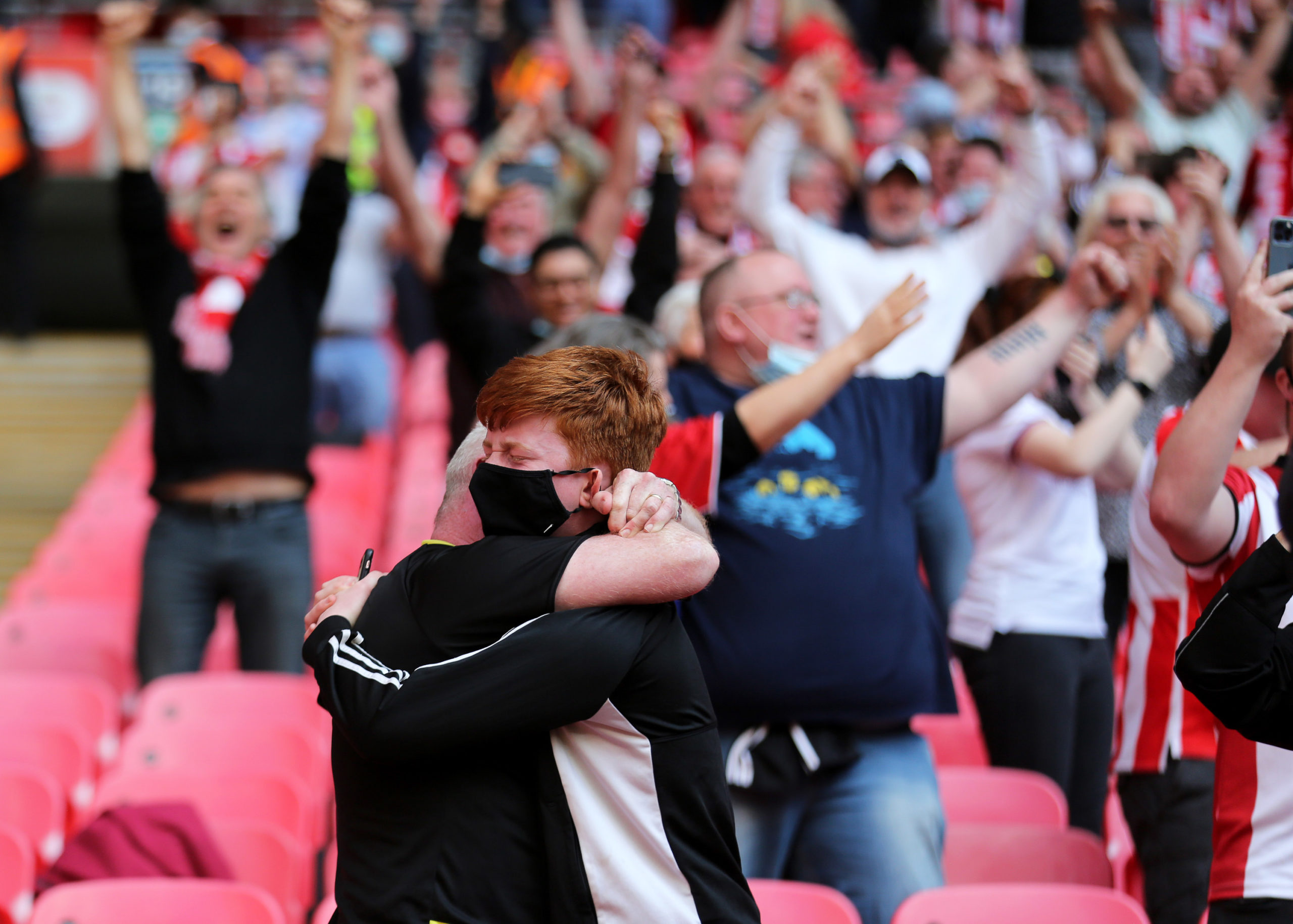 The final whistle on Saturday brought tears to the eyes of many Bees fans at Wembley. Greville Waterman admits he was one of them. Grev, a Brentford historian, is a survivor of more Play-Off failures than he cares to remember.
Share |

I have never previously been much of a believer in the words of that famous old proverb which states that “all things come to those who wait” but just before 5pm on Saturday May 29  2021 I finally realised that my scepticism was unfounded and in fact how true they were.

Referee Chris Kavanagh’s final blast of his whistle signalled the return of Brentford FC to the top division of English football a mere 86 years, one month and seven days – or 31,449 days in total – since a narrow and heart-stopping 3-2 victory at Bradford Park Avenue on Easter Monday, 22nd April 1935 confirmed promotion from the Second Division to the First.

Thomas Frank now joins the immortal Harry Curtis in the pantheon of managers (or Head Coaches) that have led the Bees to the promised land.

There are so many parallels between the Brentford teams of 1935 and 2021 and that crucial win at Bradford symbolised the breathless excitement and uncertainty of the promotion race. With only 25 minutes to go, the Bees – underperforming in key games as so often has been the case in more recent times – were trailing a mediocre lower mid-table Bradford team with nothing to play for by two goals before in an incredible and unexpected volte face a 40-yard thunderbolt of a free kick from skipper Arthur Bateman started the recovery and reinvigorated a faltering team and two late strikes from star winger Dai Hopkins, the winner a sensational solo goal, turned a crazy game on its head (shades of the Bournemouth Playoff Semi-Final second leg, perhaps?) and confirmed promotion.

Harry Curtis had transformed a club that had never achieved anything of note previously and gradually built a youthful and skilful team made up of young, unheralded and bargain basement players undervalued by their previous teams. Now where have I heard that again lately?

They played a vibrant brand of attacking football and to the total bemusement, scepticism and astonishment of the rest of the football world, Curtis led them on an amazing and totally unexpected journey from the depths of the Third Division South to the riches of the First Division in a mere nine years – a journey that the current team completed on Saturday just seven years after winning promotion from League One to the Championship.

For 31 goal Ivan Toney read Jack Holliday, described at the time as a ‘robust, bustling type of centre forward, he is extremely difficult to knock off the ball and can shoot with either foot’. Does that remind you of anyone else perhaps? The burly and raw-boned striker from County Durham whose 39 goals had cemented promotion to the Second Division in 1933 now, two years later, top scored with 25 goals and earned a call up to play for an England X1 as the Bees finally reached the top flight.

Cometh the hour, cometh the man, and club captain, Arthur Bateman, a cultured right back who was known for his leadership abilities rather than for any prowess in front of goal, scored for the only time in a long and distinguished career with a fulminating whizz-bang free kick that heralded the start of the Brentford comeback at Park Avenue, Bradford, on that memorable Easter Monday back in 1935.

Bateman went on to lead the Brentford team to unparalleled success in the years leading up to the Second World War and deservedly earn the nickname of the “Iron Man” before an injury incurred in a famous 1-0 victory over Arsenal (Brentford’s patsies – a team that the Bees went on to defeat five times in the ten First Division matches between the two clubs between 1935-1947) in September 1938 led to his cruel and premature retirement. Happily, unlike many footballers from that era, he went on to have a long and successful career post-football as he returned to his roots in Grimsby and joined the police where he rose to the ranks of Detective Inspector.

Why have I dwelt so long on Bateman? Well, I was fortunate enough to obtain his 1935 Division Two Championship medal a little while ago and I can now confess that I regularly used to rub it as a good luck talisman throughout the long, stressful and arduous season just concluded and I am smiling and looking at the medal now, suitably framed and standing proudly in all its glory on my desk, its task successfully and gloriously completed. Thank you, Arthur, to me you played just as crucial a role in this promotion race as you did eight-six years ago. Rest easy, Sir.

I have no intention of telling the tale of our fully deserved and long overdue victory at Wembley Stadium on Saturday – my esteemed colleague, Bill Hagerty, can do that far better than I, but I simply wanted briefly to reflect on what our achievement means to me and every other Brentford supporter.

I started watching the Bees as a young boy way back in 1965, ridiculously – or so it seemed at the time – choosing to support a struggling, disregarded and faded Third Division club fallen on hard times rather than the vibrant and trendy Chelsea team also offered to me as an option by my father. My earliest memories are of keen tussles against the likes of Scunthorpe, Workington and York City, with only the occasional treat to look forward to of a local derby against QPR or Millwall, where even now looking back through the rose-tinted glasses of nostalgia I have very few memories of moments of breath-taking skill and excitement and far more of gruelling battles in the mud where brawn and brute strength were generally the winners.

To even imagine or dream of where we now find ourselves as a club was laughable and totally beyond my comprehension at the time as we were light years away and, indeed, almost went out of existence a couple of years after I started to support the Bees.

It is less than a decade ago that I even began to think that reaching the giddy heights of the Championship was a realistic and attainable goal – and then almost immediately rejected such thoughts as total madness. I was staggered and ecstatic in equal doses when Mark Warburton led us to the second tier in 2014 and I had no expectations beyond fervently praying that we would stabilise at that august and rarefied level and not find ourselves relegated with ignominy as imposters from whence we had come.

Seven years further on and we are a club transformed, one that has earned the grudging respect and even envy, perhaps, of the football fraternity for our stability, strategic planning, the brio of our football, sheer common sense and determination to do the right thing.

I am not going to even begin to speculate on how we will do and what sort of team we will field when we proudly make our EPL debut on  August 14 2021 (or more likely knowing the vagaries and demands of the unbending taskmasters at Sky TV, August 13 or 15 perhaps!) as those are conversations for another time. At the moment I simply want to glory and luxuriate in the reality in which we find ourselves and enjoy the moment.

And yet it is a pride and joy tinged with a sense of immense sadness and emptiness and like so many others on the final whistle on Saturday I found myself crying floods of tears, as indeed I am again now as I write these words, mourning those who are no longer here to share this incredible journey and achievement with us. A salutary reminder that football is all about family and community and Brentford FC totally symbolises the togetherness and sense of unity present in the best and most loving and supportive of families.