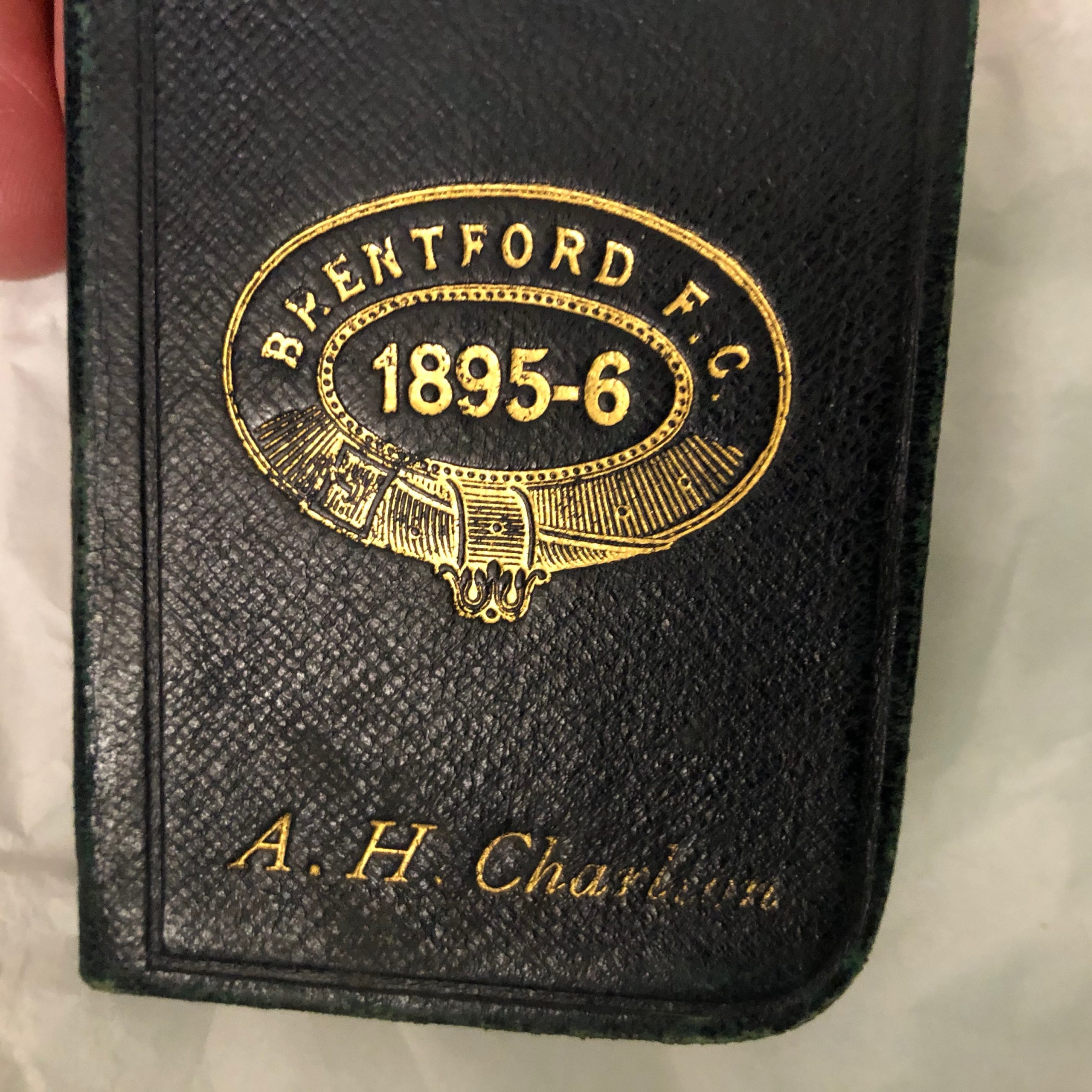 HOW THE HISTORIAN BEES SAFEGUARDED THE BEST OF OUR PAST

A group of Bees fans have helped the club safeguard the jewels of the archive- including an 1895 season ticket -while giving other fans the chance to buy pieces of Brentford's history.
Share |
more

In 1990 Rob Jex was voted Brentford’s first ever ‘Supporter of the Year’, beating off competition from Peter Gilham for an award for an ‘outstanding contribution to the centenary year’. Almost every Saturday for two years he’d gone to the British Library Newspaper Library to research match reports from 1889 onwards for use in the book ‘100 Years of Brentford’. 30 years later Rob, now retired, has got more than 50,000 digital items about Brentford FC on his computer. He’s spent more days than he cares to remember digitising everything from match reports to fans’ scrapbooks, club programmes, player contracts plus photographs of cups and shirts. 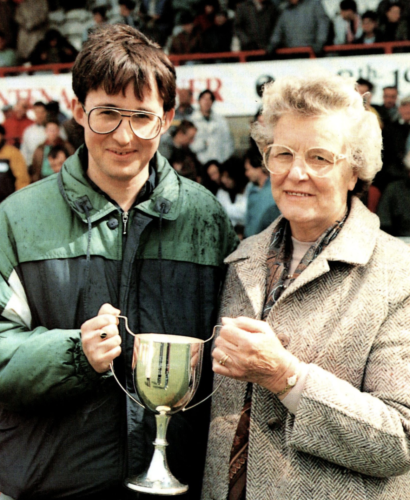 The knowledge and commitment of Rob and the rest of the Brentford Historians Group – Paul Stembridge, Paul Briers, Mark Croxford and Dave Lane – has meant the jewels of the Bees archive can be safely stored while other artefacts can be released for sale to benefit the club. Before launching an auction the club needed to make a full inventory of what was in Griffin Park and the club’s storage facility. The first version was done by Neil Cooper, a Bees fan with a Masters Degree in Museum Studies, and it took him 230 hours. Neil is the son of BU Board member Ron Cooper whose devotion to the club’s history is such that for many years he has been welcomed into Griffin Park to clean the cups in the Boardroom and The Hive. Ron and Neil also worked with the family of the late John Pitt to transfer his extraordinary collection of Brentford memorabilia from his garage, attic and garden shed. There were three days of careful and sensitive work moving the objects into a safe space in the club’s care. 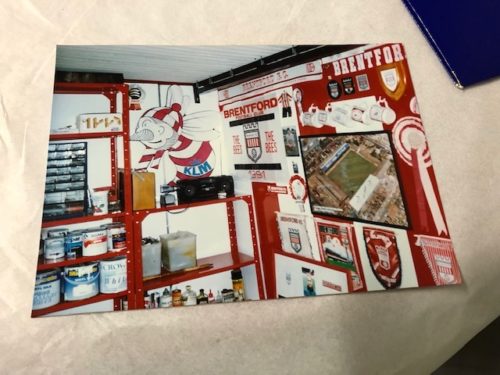 A glimpse inside the John Pitt collection of everything Brentford. Picture courtesy of the Pitt family.

The Historians were then invited to sift through the full range of items in the storage facility. Most of these are Brentford’s property but there are also personal collections like John Pitt’s and the Arthur Charlton collection which have been bequeathed to the club and will be kept intact. Paul Stembridge, a recently retired archivist, began photographing everything that was in storage, the Hive and the Boardroom and building on the original inventory, and with Rob Jex put the 1500 + pictures in a database with all the relevant details. Whatever was later decided to do with each item a photograph and a detailed description of it would always exist. 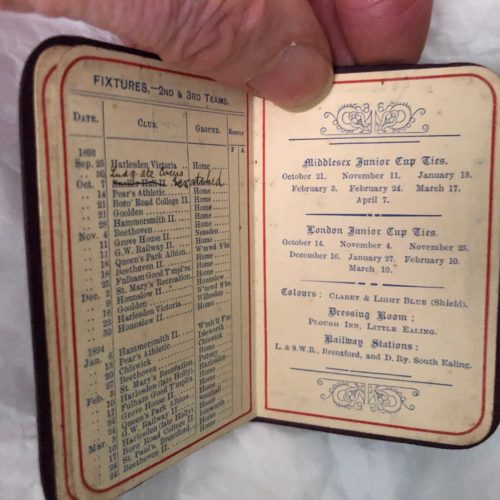 A Brentford season ticket from the 1890s, part of the Arthur Charlton collection

Thanks to the Historians, club officials were able to decide which were the most important items to be kept for future display. These include such gems as a ‘1892-93 season ticket and fixture list with gold foil emblem on front’. Everything else on the database was then made available for auction if the club wishes to sell them and anything not sold can be removed knowing that at least a digital record exists. 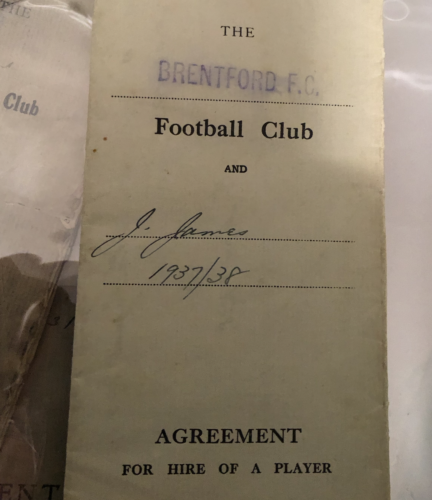 Sally Stephens, Brentford’s Fan and Community Relations Director said; “I can’t thank everyone involved in this project enough. It’s been a painstaking task over a number of months and we simply couldn’t have completed this without the dedication and the time offered by all the people involved so far. Thanks to them, we can ensure that items that are important to the Club’s history are retained and cared for appropriately and others can feature in our Farewell Griffin Park auction to allow fans to own a little bit of our history, including many old shirts and framed pictures that once adorned the walls somewhere in Griffin Park.”

Rob Jex’s own connection to the Bees goes back to his father David who’d gone with his own father to an FA Cup game against Preston in 1936. Rob’s own first game was in February 1967 against Bradford City and he’s been a regular since 1973. “I’d always been fascinated by the history of the club and I heard that although the date of Brentford’s first ever match was known nobody knew what the score was or who played. I thought that’s a challenge, I’ll see if I can find it out and I did. The club were impressed and I was asked to research the early years – 1889 to 1920- for a book to mark the centenary in 1989.”

From that he developed a plan to create a digital record with as much material as possible about every game in Brentford’s history. “I’m a kind of match by match person looking for as many different reports on each game as possible. With a digital archive you can include fans’ own reports. It’s a labour of love really.” 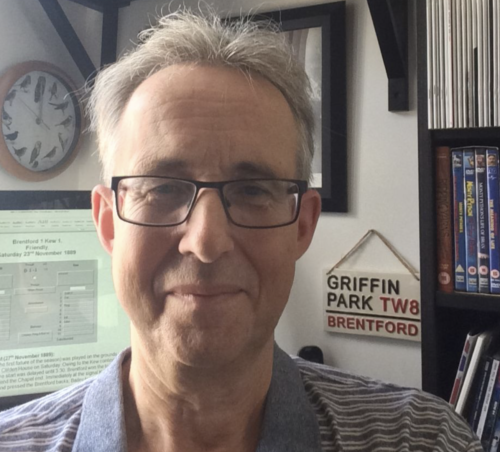 With the current squad making fresh history this labour of love already covers about 8,000 matches and now increases every match-day. Rob is happy to share with like-minded souls and last year began to pool his work with others and build a digital collection covering their different interests.

“Dave Lane was the driving force behind setting up the Historians Group. We have different interests; Dave is producing his books, Mark Croxford is helping him with that but has also got his own digital archive of more recent stuff, Paul Briers is interested in the early days, Paul Stembridge helps my work. I’d like to get more people involved who have similar archives, the individual collections could be joined up technically, maybe via a digital hub.”

Rob says of his own collection: “I don’t want to hoard it, I want to share it but on a limited basis. We don’t want the Historians work exploited by people selling copies of what are other people’s private property.” Rob still keeps all his own hard copies but “the ultimate objective in these paperless days is to get rid of them, to not keep what you don’t need. Having cleared out the homes of late parents the last thing I want to do is to burden my children with a whole mountain of stuff that they don’t really want.”