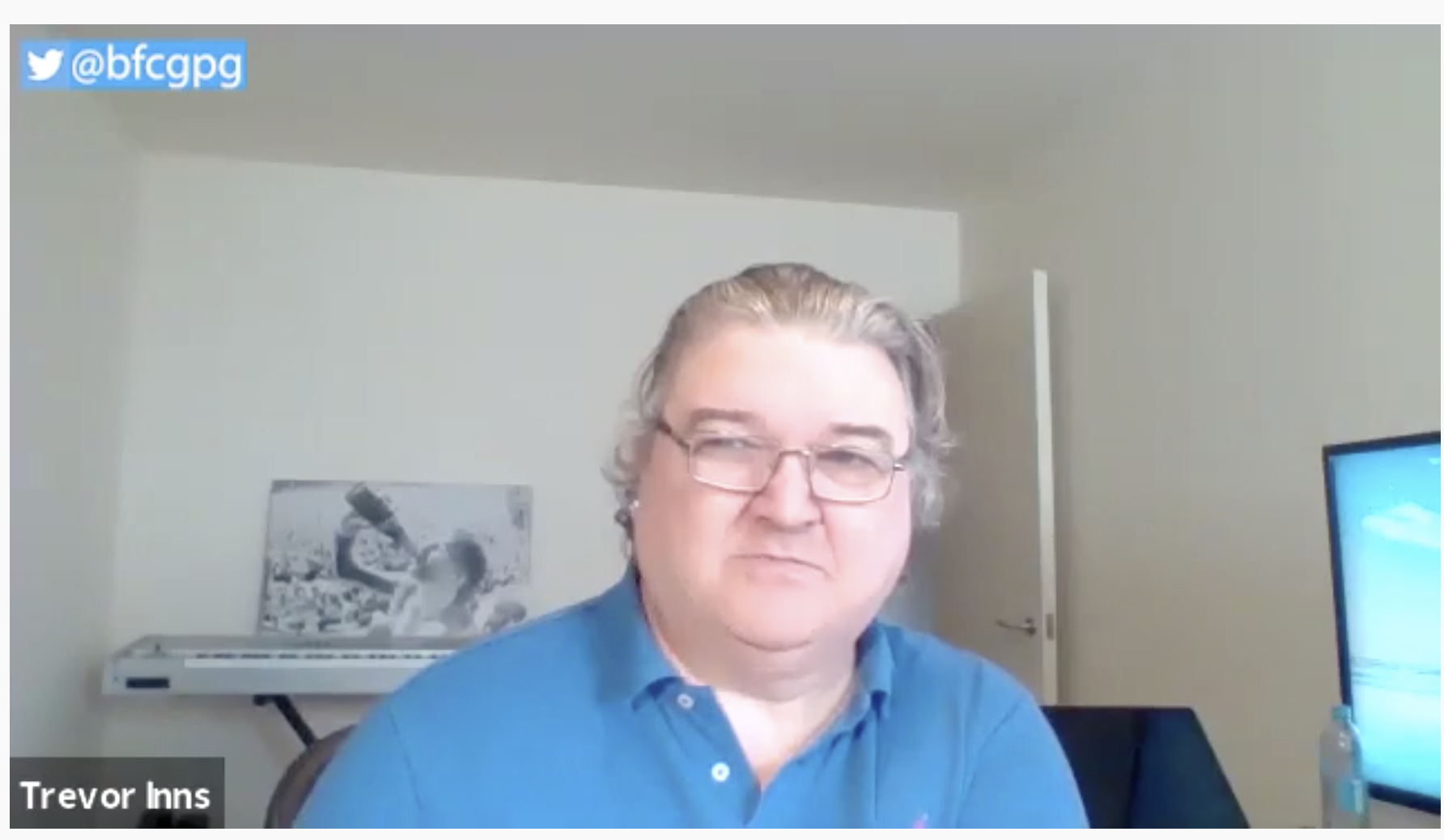 HOW GPG ON ZOOM IS NOW A SATURDAY 3PM FIXTURE.

Trevor Inns, founder of the Griffin Park Grapevine noticeboard, has linked up Bees fans with club officials and a former manager in what has become a 3pm Saturday fixture. Supporters have had the chance to use zoom to put their questions. Trevor has been telling us where the idea came from.
Share |

A few weeks before lockdown former Brentford manager Martin Allen contacted Trevor Inns of the Griffin Park Grapevine and said he wanted to do something for Brentford fans. Trevor decided to mull over what, when and how to do that something. He explains what happened next: ‘when the lockdown arrived I asked Phil Giles via WhatsApp if he would do a live interview with fans to deliver their regular football fix and to keep spirits up. To my great surprise, he immediately said yes. So now I knew I had two guests lined up’.

Phil and Trevor agreed that 3pm on a Saturday would be a good time.Trevor says ‘after all what else would we all be doing at that time of the week. Then it was down to getting the technology platform correct’. He went for the Zoom video conferencing software.

Phil did over two hours of questions and then it was time for a slot with the man who’d prompted the whole thing, Martin Allen. Trevor says ‘He was also a great success and it was clear we had an out-of-control snowball. It struck me that this was something we were going to have to do every week for as long as we can.‘Jon Varney said he would come on and I thought he and Phil were both accomplished at dealing with the questions. There’s obviously a great deal of uncertainty with the current situation and from the sessions I think we all got an idea of what thoughts were going through their minds and how the club thinks and operates. There certainly weren’t any questions that were ducked completely’.The fourth session was with Kevin O’Connor and Sam Saunders. 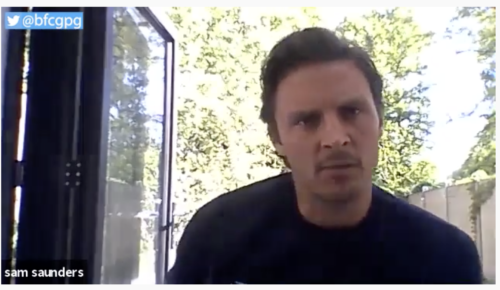 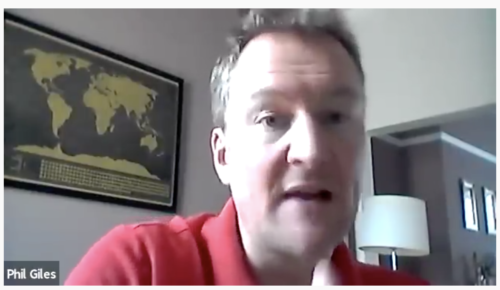 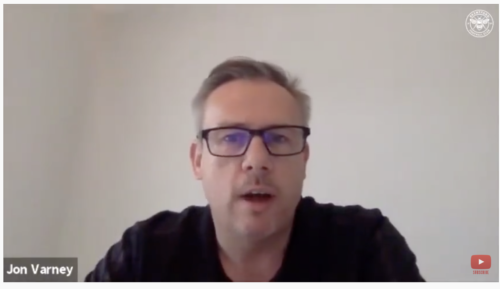 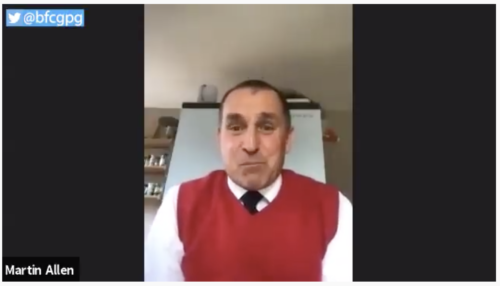 On average about 200 people have taken part in each live event and there have been a further 2,500 views of each recording on youtube. ‘Supporters have said how intimate the sessions come across and help them from going completely stir-crazy during the lockdown. There have been a couple of hiccups, most notably when we had some intruders in the first session (hence why we all have to register now), and I failed to check that we were recording the fourth one with Kevin and Sam last Saturday. But we managed to salvage the last hour’. 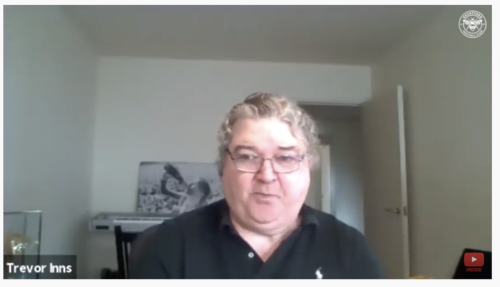 Trevor Inns keeping an eye on over a hundred screens at once.

‘I’m concentrating on all sorts of things when the call is going on, checking if anyone is pinging me via twitter or email about connection problems, admitting latecomers and working out who is next to ask a question. However sometimes when a screenful of skin appears it’s someone in a hot-tub. I do wonder if people remember that they are on camera!’.One live highlight was when Brentford historian Greville Waterman started cleaning his floor. Trevor jokes: ‘We had to turn-off Grev’s camera the next week!’ Grev says people have teased him that they want to hire him as a cleaner.

Looking back on the first four sessions Trevor says; ‘It was good to see some familiar faces, as I am sure it was for everyone. I’ve had plenty of contacts from those that attended saying how much they enjoyed it and how they feel it makes the club pretty special to be involved with. I was so pleased we were able to give a live shoutout to NHS Palliative Care Nurse Jenny Draper and her daughter Lucy – both Bees fans. It was great that Lucy could thank all those fans supporting her Mum and that Jenny herself was able to tell everybody she’d had ‘a lovely call’ from Thomas Frank. 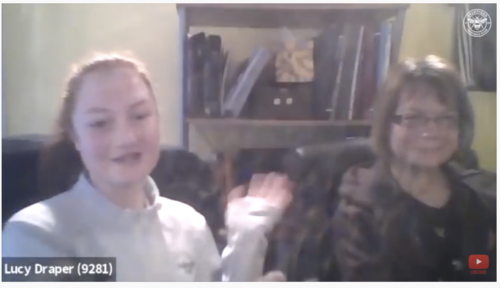 ‘Running the event has been a team effort so thanks go to Adam Hobbs, Alex Austin, Dan Casey, David Michael and Mark Fuller for their invaluable assistance – especially in the first session!’

Next week Trevor has Andy Scott lined-up. ‘With his time as a player, manager and head of recruitment I am sure that there is plenty for fans to ask him. As for guests after that, who knows!’.

You can register for that session here.