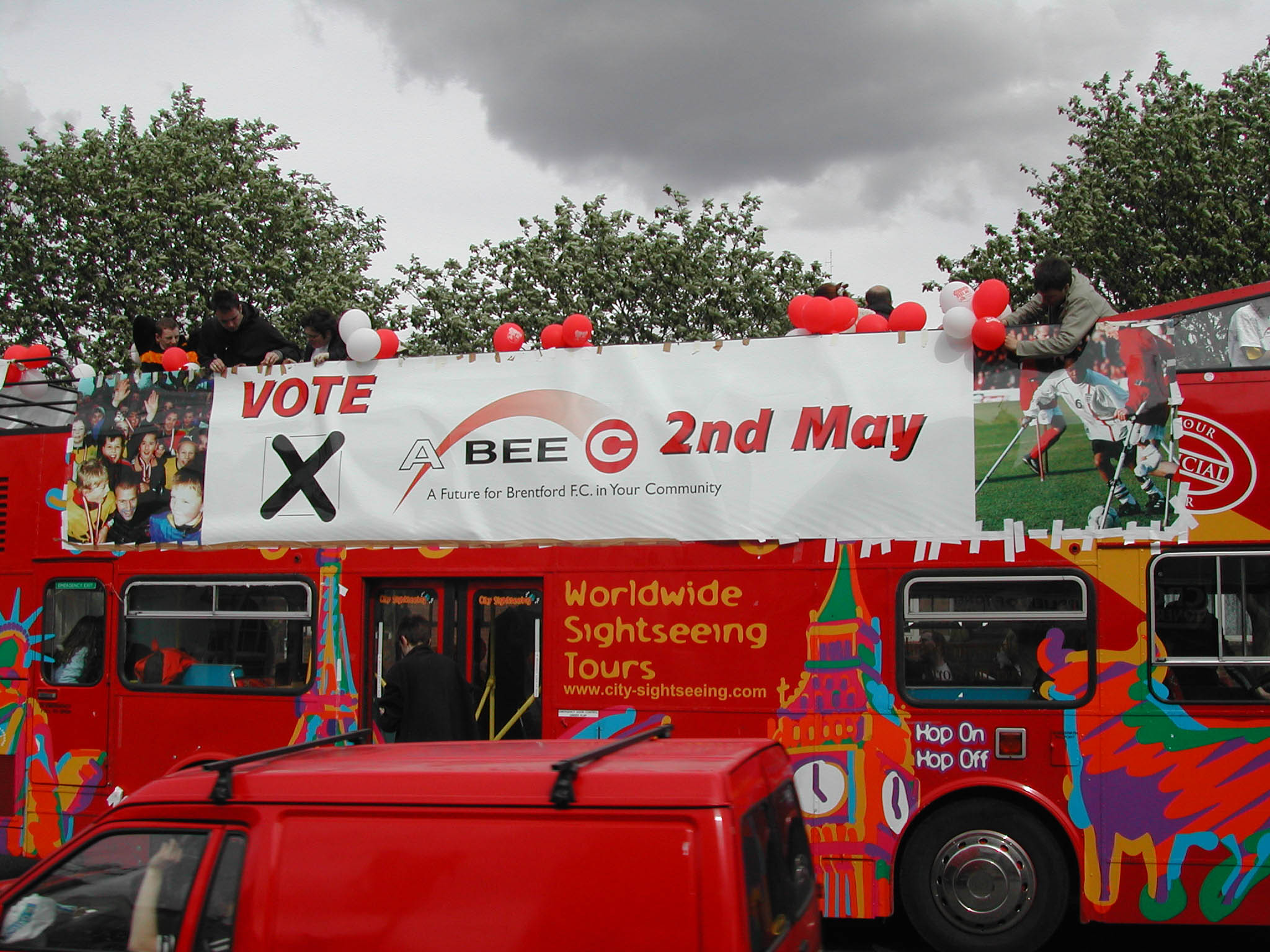 When you next look at Brentford's new stadium remember these extraordinary events that eventually led to its construction.
Share |

It sounds like the script for a 1950s comedy made down the road from Brentford at Ealing Studios: a supporter of a football club campaigning for a new local stadium becomes a candidate in a council election against the dominant party, he wins the election and eventually the stadium is built. But this is a true story, it is about the political party ‘ABeeC’ created by Bees fans back in 2002 and there may not be a movie about it but there is a documentary and you can watch it for free. So never mind Netflix, click here and enjoy watching how Brentford fan Luke Kirton won the day back in 2002. As the 18th anniversary of his triumph approaches Luke has been reliving it with BU Chairman Stewart Purvis:

‘It was an out of body experience’, that’s how Luke Kirton remembers the moment the electors of Brentford voted him into office. To be precise the moment was at 3.30 am on Friday 3rd May 2002 at the Hounslow Civic Centre in Lampton Road. The strange hour is explained by the fact that there had been two recounts into the night. Local papers recorded the ‘jubilant scenes’ among supporters and compared them to the reaction to a winning goal at Griffin Park. 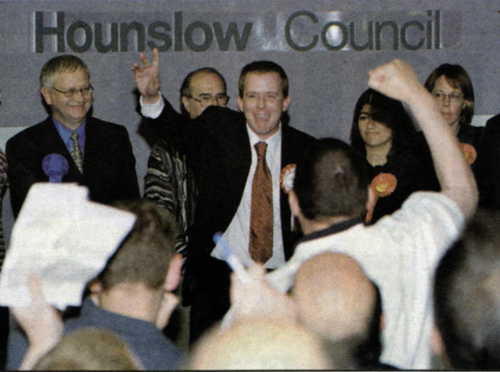 The documentary ‘Political Football’ made by independent film-maker Adrian Goldberg, shows the actual moment of victory. As the returning officer reads out that Luke Kirton has been elected, the successful candidate, a young man in a smart suit and tie, steps forward from the podium to embrace his cheering supporters. Luke remembers: ‘We were upsetting the established parties, they didn’t like the fact that there were all these supporters at the count enjoying themselves’.

‘ABeeC’ had fielded 14 candidates, one in each ward in the Hounslow Council elections. Other candidates included Peter Gilham, later ’Mr Brentford’, and David Merritt who became Chairman of Bees United. Luke was the only candidate to win, but one win was enough to send a message to the Labour Group controlling the council that they needed to take notice of the electoral power of Bees fans.

It had all started with Luke and other committee members of BIAS, the Brentford Independent Association of Supporters. ‘BIAS was campaigning against the then owner Ron Noades and we wanted support from the Labour-controlled local council in our search for a new stadium. We’d written them a letter but they basically said they were not going to talk to us. We were left with no other option than to stand in the elections.

One of the BIAS group, Paul Stedman, became the leader of ‘ABeeC’ and he officially registered it as a political party. He couldn’t stand for election himself because he lived outside the borough but in the documentary Luke can be seen joking that any new stadium should be called ‘The Mr Paul Stedman Stadium’ or ’Steders Stadium’ for short. The job of choosing candidates began. Luke was 31 and a dispatch worker at an antiquarian bookseller. He had never been involved in politics before. ‘I lived in Brentford, I put my name forward to stand there and that was it’. He lived at home with his Mum and her front room became his Campaign HQ. 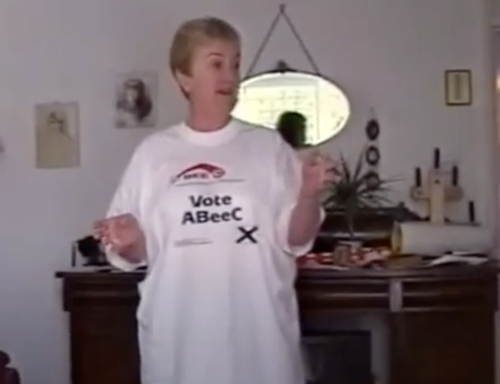 Luke’s mother, Mary, in her ABeeC T-shirt takes orders for tea at Campaign HQ in her front room. Picture from ‘Political Football’

There were three seats in the Brentford ward and Labour had won all three at the previous election. The Labour Group controlled the council. But ‘ABeeC’ had the energy of political novices and as Luke remembers ‘we didn’t have the baggage of a political party and got a lot of support.We had an army of 50-60 Brentford supporters working across the borough plus a dedicated team in each target ward working every single day for two weeks. We were out leafleting, knocking on doors, driving around with a megaphone. We’d seen on television what people do during elections so we did it.’ 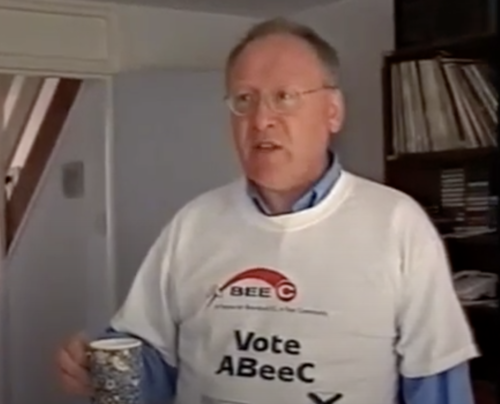 Luke spoke at the local hustings, the kind of public meeting which candidates used to address at election time, answering questions on a range of non-football club issues.  His hard-working agent Steve Cowan was experienced in elections because he had previously been a Labour candidate. He was the engine room of Luke’s campaign, organising the canvassing and having leaflets and posters printed. Feeding the engine room was Luke’s Mum, Mary, in a ‘Vote ABeeC’ T-shirt producing a constant supply of tea and sandwiches. She thought a single issue party was ‘a bit potty to start with because I thought people would be more interested in services and pot holes but realised that people were very concerned because if the football ground went there wouldn’t be much left in Brentford’. Luke began to believe too.’One day there were about 30 ‘ABeeC’ supporters  walking down the street and we bumped into the Labour ‘Team’ of about 3 people, There was a  look on their faces as it dawned on them that we had this many people involved. It was one of those moments when you thought ‘we can do this’. He began giving interviews saying ‘We are going to win’. 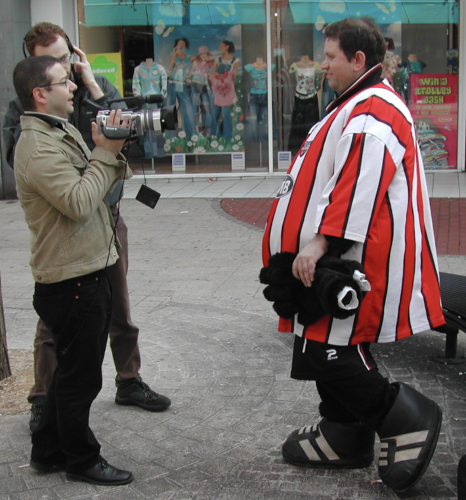 ‘One of our major tactics was learned from Charlton where fans had stood in an election. Even though there were three seats in each ward we only put up one candidate, not three. So on the doorstep you could say ‘vote for two candidates from your usual party but lend us your third vote’. Come election night Luke remembers the moment his agent Steve Cowan, who was watching the count, predicted ‘I think we’ve done it’. Then after two recounts the result was announced. ‘It was an out of body experience really, I was saying I don’t believe this. I was ushered into the council chamber to get my official photograph taken and it was all a bit surreal’. His mother Mary Kirton said on the night ‘I’m a bit shell-shocked and a proud Mum’. 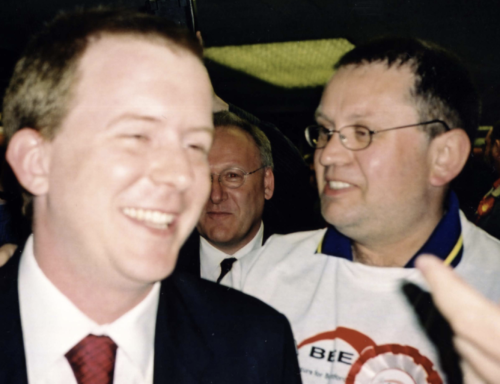 The winning team: Luke Kirton with Paul Stedman. Steve Cowan is in the background.

Paul Stedman said he was gobsmacked, he held up an official notification which now referred to ‘Councillor Kirton’.The ‘lend us one of your votes’ tactic had worked. Labour came first and second with 1186 and 933 votes and Luke came third with 883 votes. Enough to get him elected. The unsuccessful third Labour candidate Seema Malhotra was 13 votes behind Luke on 870. She went on to become Labour MP for Feltham and Heston. 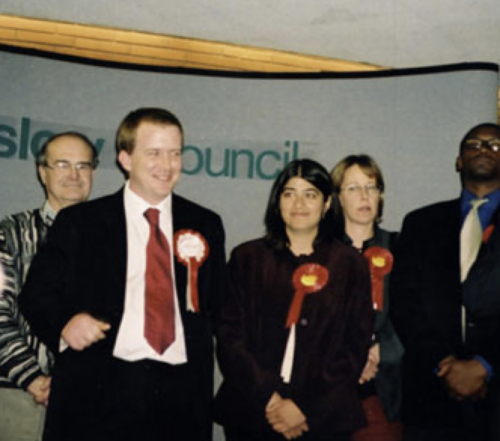 Luke Kirton next to the Labour candidate he defeated, Seema Malhotra.Picture from BIAS

Now that Luke Kirton was a councillor for Brentford he could bring extra clout to what had begun as BIAS’s Stadium Action Group which was focusing on an alternative local site to Ron Noades’s preference, Woking. ‘We discovered that the triangle of land at Lionel Road was owned by what was then the Strategic Rail Authority and that they were reviewing their land portfolio. They had offered it for sale to Ron Noades for a new stadium for the Club but he said ‘no it’s not big enough’.

‘We had a very talented architect on our committee, Matt Dolman, who checked to see if a stadium could fit on land that size .Turning the shape around on his software he discovered that we could.That’s when we started to say we want that land’.

Councillor Kirton was working with Brian Burgess and Chris Gammon from Bees United (BU) who were developing plans for a community stadium. ’We began trying to influence people to get that land back on the table so that we could build a stadium on it. I had to be Mr Reasonable and Mr Sensible on the council to prove to them we weren’t some lunatic fringe organisation to be ignored. I had to build my reputation as a good councillor with the residents and the council’s officers. We turned it around and changed the attitude of the Labour Group which controlled the council. We got our MP involved, the Minister of Sport, there were lots of meetings. Brian and Chris developed a big file of documents on a new stadium. Eventually they made the breakthrough, got partners involved, Bees United were able to take over the club from Ron Noades and the rest as they say is history; BU proceeded into a partnership with Matthew Benham and as a result Brentford will be playing in a new stadium next season’.

Luke sees a clear link between what happened then and where the club is now: ‘If Matt Dolman, BIAS, the Stadium Action Group and Bees United hadn’t worked out that you could fit a stadium on that site we’d still be faffing around with nowhere to go, or worse playing at Woking or being the no ground nomad club that Brighton fans had to suffer. This was all about fans being involved in the future of the football club. It was an amazing effort from an awful lot of people. There were other people far more important than I was, mine was a small part in a many pronged approach. We had the power of the many working for a single goal so these ideas came up, got worked on and we were able to take them forward. Changing the culture of the football club, turning it much more into a community idea, that attracted Matthew Benham to be a bit more involved and then him taking ownership of the football club and wow look at it now!’. 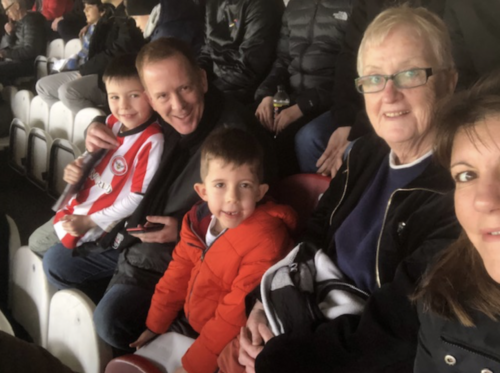 Luke, kids, Mum and wife at the 5-0 defeat of Sheffield Wednesday.

Luke is one of the few local politicians who having achieved his goal walked off the field. ‘Our threat to other councillors was that we would stand against them again at the next election unless a proper partnership with the club was established. So the Labour Group decided to get the ‘ABeeC mob’ off the table in future elections by being supportive of us. The proof of this being cemented was when the Local Authority loaned Bees United the final part of the money they needed to refinance the club and take over ownership from Ron Noades.  ‘ABeeC’s tactics had worked  and Luke didn’t need to stand again. He got married, had kids and moved to Dorset but still makes a few trips to home games each year. He chose the Sheffield Wednesday game for what would be his farewell to Griffin Park but it was also his first full family outing to Griffin Park with his sons, his wife and his mother Mary. Of course it could also turn out to be everybody else’s last game at Griffin Park.

Looking back nearly two decades Luke jokingly reflects on the four years he spent as a Brentford councillor: ‘I must be the most successful politician ever. I said I was going to do something, I did it and I left’.

There is more about ABeeC on the BIAS website here.