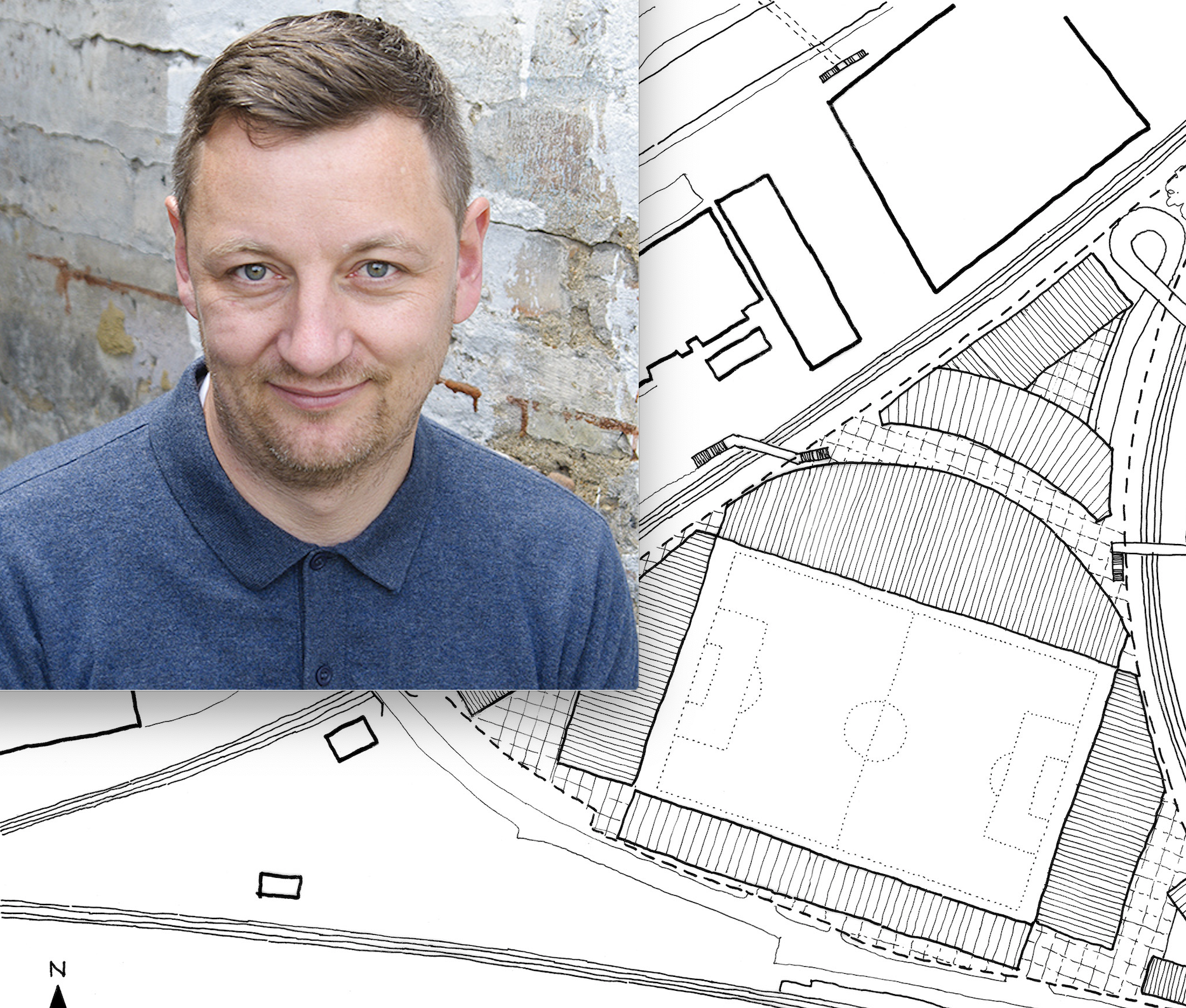 HOW A BEES FAN FIRST FITTED A STADIUM INTO LIONEL ROAD

It was always going to be a tight fit to squeeze a football stadium inside a triangle of railway lines. Two decades on we salute the fan who first worked out that it could be done.
Share |

18 years ago this month Matt Dolman was a newly qualified architect living in lodgings in Layton Road two streets away from Griffin Park. He set himself a challenge which had so far defeated others, would it be possible to fit a new stadium inside a tight triangle of railway lines at the other end of Brentford?

Sitting in his digs one night, with a few sketches, a bit of computer aided design (CAD) and a couple of compromises he worked out how it could be done. The rest, as they say, is Brentford history.

Matt knew a bit, but only a bit, about stadiums (or to use the correct Latin plural ‘stadia’).“One of my post graduate projects at Cambridge was about the railways lands at the back of Kings Cross and I did a speculative scheme for an Arsenal stadium on that site. Then I began working for a firm of commercial architects in London and my first project was part of the enabling work for Arsenal’s eventual destination at the Emirates. Stadiums interested me but I hadn’t actually worked on the real thing.”

Brentford interested him too, ever since he sat next to a Bees fan during A level French. “I’ve had my finger in several pies”. He’d become involved with the supporters group BIAS, the campaign against a move to Woking and the ABeeC Party which won a seat on Hounslow Council. He was also the goalkeeper in a team of Brentford supporters. 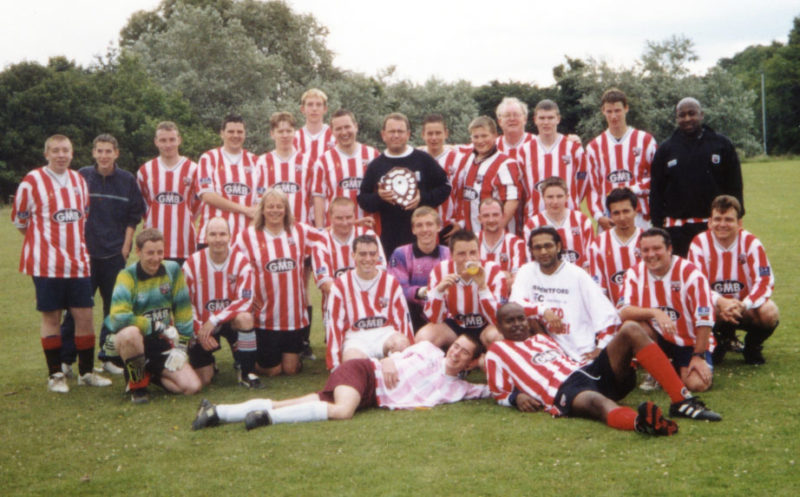 Matt Dolman is left in the goalkeeper’s kit in this 2001 photo, Paul Stedman is
holding a trophy and next left to him is David Merritt who became BU Chairman and a BFC director.

Through these activities he met Paul Stedman of the ABeeC Party, and one of the leaders of BIAS, John McGlashan. “Knowing what I did as a day job Paul saw that I might be able to help him out. I was trying to add a bit of technical input where I could. Everybody could see the difficulties we were having competing with clubs who were building new stadiums and getting revenue streams we couldn’t.

The owner of Brentford was then Ron Noades. “Ron was always quite keen on a site at the Western International Market site in Heston because he wanted somewhere on the outskirts of London with good road access on a semi green-field site. Personally I much prefer inner city grounds.”

In any case the political goodwill required to progress a stadium on a council-owned site in the Green Belt like the International Markets was hard to come by.

“John and others felt that a scheme which could progress on a non-council owned site might have the effect of holding the council’s feet to the fire a little bit. I think it was on that basis that the Lionel Road railway triangle was first looked at.

“It was a site which sometimes cropped up in discussions amongst fans, but when the idea had been explored initial feedback from within the industry was that to build something akin to the Madejski Stadium at Reading you would need to build over the railway lines which would be an expensive and complicated process.”

One day Matt sat down in Layton Road gazing towards the Griffin Park floodlights. In the window was a poster for Bees campaigner Luke Kirton of the ABeeC Party who had just won the Brentford ward in the Hounslow council elections. 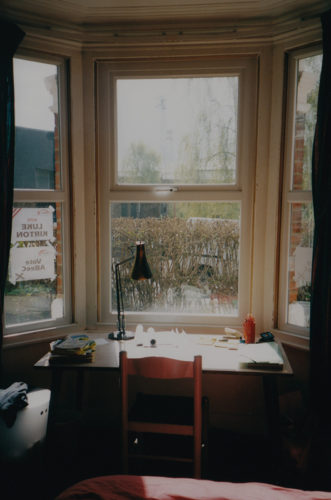 The view from Layton Road towards Griffin Park.

“I got myself some plans for the site and partly by hand and partly a bit of CAD looked at some possible solutions. If you sacrificed having a nice symmetrical oval bowl then the chances of squeezing something into a triangular site were a bit more viable. I was able to say to Paul and John that in my opinion it was possible that something could work there. I did some initial sketches which they showed the council and interested developers.  By the end of 2002 one of these (the infamous monorail scheme) went public. In the background there was still work going on and with each iteration it started to put a bit more flesh on the bones.  The club were happy to have an alternative to work with and to bolster their position in any discussions with the council. 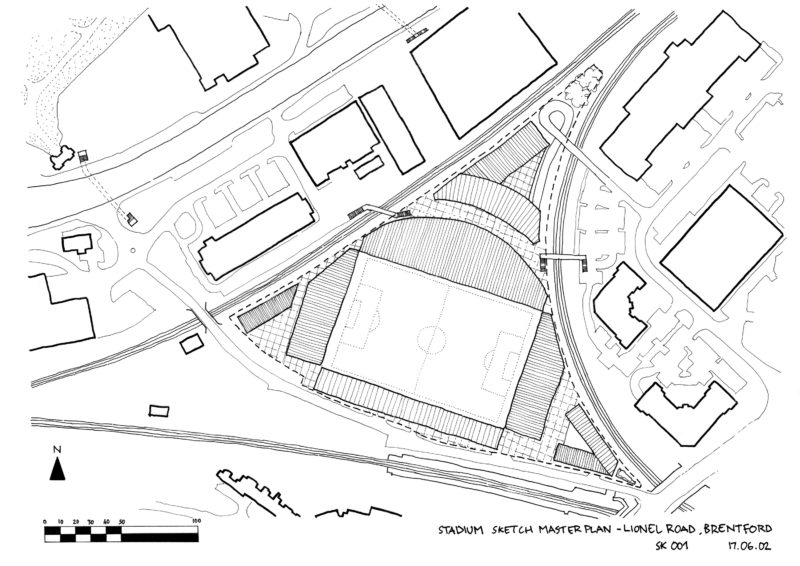 Matt Dolman’s sketch from June 2002 shows a stadium would just fit if the stands behind the goals were trimmed in the corner. This first version showed the pitch running parallel to the railway line at the bottom and the main stand in the north east corner.

“Once Bees United was up and running Brian Burgess and Chris Gammon came into the picture and they took on leadership of the project. When Noades made it clear he was looking for a complete exit strategy from the club it was important to help Bees United to have these plans on the table to develop a medium to long term future for Brentford. Matt was on the Board of Bees United from 2005- 2009. 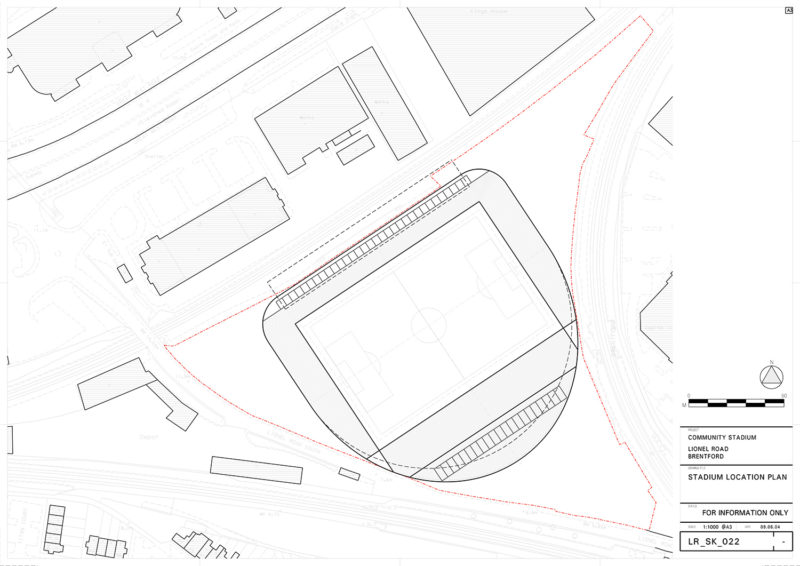 Matt’s later sketch, from June 2004, after input from other architects shows what became the eventual position of the pitch and the main stand.

Looking at the new stadium he is pleased with what developed from his first sketches done in his digs, plans which he still has. “My very first sketch is quite a similar shape to what we’ve ended up but I had an orientation with what is now the North Stand running along Lionel Road and the big main stand being pushed into the far side of the triangle. It did fit but in hindsight it would have been less practical because the main stand is where you need most access to and it was a bit land locked in that orientation.”

Matt can also see the compromises that the eventual architects had to make in order to fit the stadium in. “There is a slight taper to the top of both stands behind the goals which is slightly unusual. If you had any freedom to work with you’d have a much squarer format but when you get pinch points you have to do things like that.”

Brian Burgess, former Chairman of Bees United, says: “When BIAS and then Bees United first had the idea of a stadium at Lionel Road, Matt’s role was absolutely key in getting the project off the ground. Everyone needed to be sure that a modern, well sized stadium would fit on the site. We also needed to decide which way round it should be built in order to provide the necessary stadium facilities and maximise the potential for commercial enabling development on the rest of the land. Matt’s work gave us the confidence to press on and make it happen.”

Over the decade in which he was involved Matt Dolman never asked for or received a penny in payment for what he did. 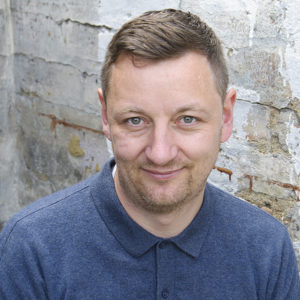 His compensation will come the day he takes his young son to Lionel Road for the first time and reflects on what’s been achieved since that he first made those sketches in Layton Road.