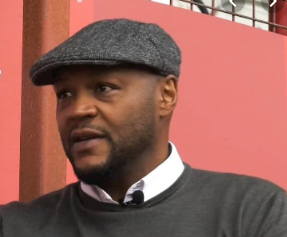 Bees United is delighted to join the rest of the Brentford family in welcoming Bees legend Marcus Gayle back as a Brentford Club Ambassador. Marcus is an inspired choice as he bleeds red and white, and Brentford has played an integral part in what has been a wonderful and successful career.

Marcus came through the ranks playing in an exceptional Brentford youth team that came close to winning the FA Youth Cup in 1989 and after winning England Under 18 honours he graduated to the first team as a tall, lithe, strong left winger gifted with pace, power and a thunderbolt of a left foot shot. Who can forget his net-breaking long-range howitzers that brought him goals against the likes of Reading and Bradford City?

Marcus was versatile and played up front for much of the doomed 1992/93 relegation season alongside Gary Blissett and it came as no surprise when the big clubs came sniffing and he eventually moved to Wimbledon in 1994 for a bargain £250,000 fee. His career reached great heights at Wimbledon, Rangers and Watford and one of his proudest moments came when he featured for Jamaica in the 1998 World Cup Finals in France.

It was fitting that Marcus ended his Football League career of over 500 matches where it started at Griffin Park where he was part of a Martin Allen team that came so close to promotion in 2006.

Since he retired Marcus has been inducted into the Brentford Hall of Fame and has also made his mark with the likes of Kick it Out, the Premier League and KickOff@3 delivering “Equality Inspires” diversity workshops and encouraging health and well being in young people. Marcus is a man of great integrity. I have come to know him working alongside him on iFollow and can testify that he is an honest, humorous and intelligent man who inspires respect and he will be a worthy addition to the Brentford family.