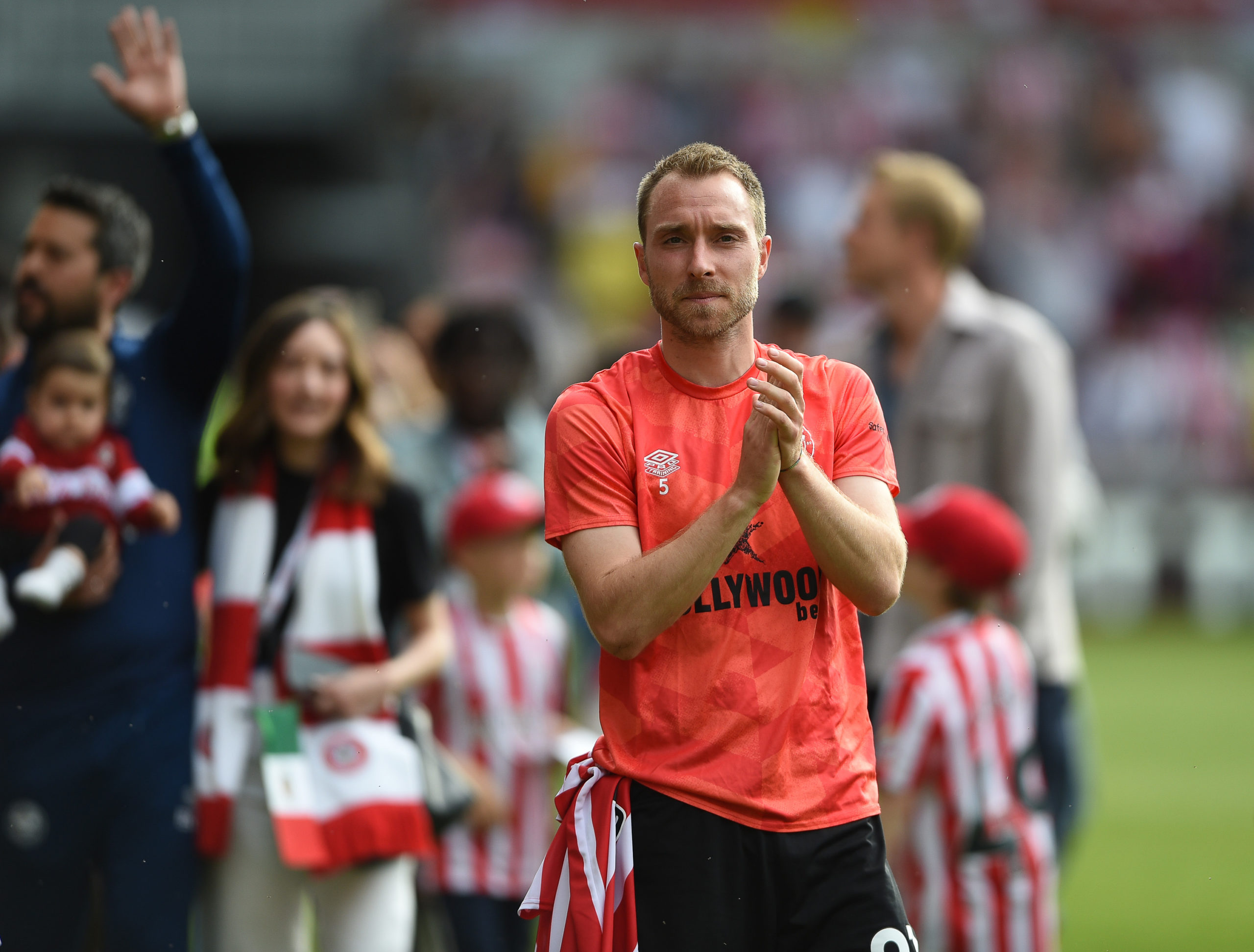 The 2021/22 season is gone and now we know Christian Eriksen is too. BU Contributing Editor Bill Hagerty reflects on both of them
Share |
more

Julius Caesar did it first, around 47 BC, when proclaiming his vanquishing of the army of Pharnaces II of Pontus at the Battle of Zela. Only he did it in Latin. Christian Eriksen came, saw and conquered all before him more recently, captivating Brentford supporters as he put opposition defences to the sword.

Hold on a minute, says my mate, Charlie. Surely comparisons between Julius Caesar and Eriksen are somewhat over the top?

Not if you are a Brentford supporter, I reason. Julius Caesar went on to tarry with Cleopatra before suffering death from a thousand cuts – twenty-three actually, says Charlie – and while Eriksen had no Cleopatra in his life, the reaction to news that the majestic Dane was leaving the Bees for Manchester United has seen an assassination of the character variety.

The truth is that without Eriksen’s 11-match contribution, Brentford quite likely would have been struggling to avoid relegation towards the end of their first season in football’s top tier since Julius C was a nipper.

Charlie does not agree, arguing that the Bees started well and achieved some spectacular results long before Christian reappeared on the scene after remarkable recovery from cardiac arrest when playing for his country in June of last year.

Their very first Premier League game remains sharp in the memory, Sergi Canós scoring the team’s first goal at the Community Stadium as Arsenal were despatched 2-0. 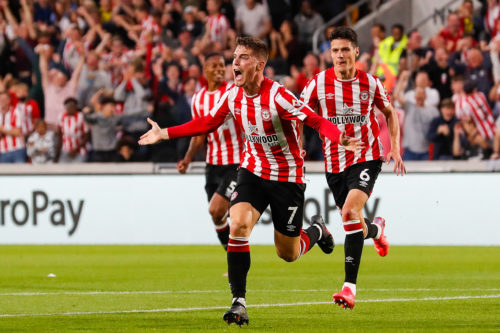 All was right with the world and there was an even more satisfying performance just a month later when in what must rank as one of the greatest games in the bus stop in Hounslow’s history, Ethan Pinnock, Vitaly Janelt and Yoane Wissa matched Liverpool’s three goals and Ivan Toney’s late strike would have sealed victory but for an offside decision.

A 2-1 home victory over Aston Villa in the first game of the New Year was welcome, but memorable mainly for an incident captured on social media and various football TV shows. In the final minute Villa substitute Trézéguet, shepherded by Bees’ sub Saman Ghoddos, progressed into the Bees’ penalty area before throwing himself to the ground and writhing in agony despite being nowhere near Ghoddos, or the ball for that matter. As I wrote at the time, it was the worst piece of acting since Dick Van Dyke’s cockney accent in the original Mary Poppins film.

Golden days, I agree, but too few of them until Eriksen agreed to join Brentford’s Danish contingent while also reclaiming his place in the national side. 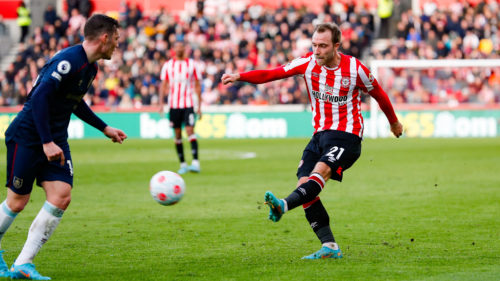 His debut, against Burnley at the Community Stadium on 12 March, was a scrappy game for both sides with the exception of Christian Eriksen. Christian Eriksen does not do scrappy. With a goalless draw seeming inevitable, the new boy on the block – 30 in February, no kid he – raced down the left flank before delivering a cross deep into the Burnley goalmouth so accurate that Toney was able to time to perfection a feet-off-the-ground lurching header that defeated goalkeeper Nick Pope. (A Toney penalty in the dying seconds in added time saw Brentford win 2-0).

Everyone present that day would have realised that here was a special talent. His state-of-the-art passing – ten out of ten for accuracy and in volume – promised much more. From then I began to watch him when he wasn’t on the ball, anticipating those little bursts of speed that took him into space and the almost telepathic connection he swiftly developed with Toney and Bryan Mbuemo.

All of which culminated at Stamford Bridge one Saturday afternoon in April at four o’clock – I was in Spain, watching the game on television – when one of the finest displays in Brentford’s history saw them pulverise a Chelsea side that before the starting whistle sounded had predicted no more than a walk in the park for the home team.

Inspired yet again by their midfield general, Brentford’s dominance did not begin until just a few minutes into the second half when, perversely, Chelsea centre-back Antonio Rüdiger thundered in a shot from 40 yards or so that eluded David Raya and cannoned into goal from an upright.

But, my notebook records, ‘Within ninety seconds, give or take a few, Bryan Mbeumo set up Vitaly Janelt to burst clear of a defence and beat goalkeeper Edouard Mendy handsomely. And a bemused Chelsea were still scratching their heads four minutes later when Mbeumo and Eriksen broke at pace from their own half for Bryan to cross into the Dane’s path, enabling the team’s new goal-machine – three goals in as many games, two of them internationals – to deliver a fine chip and put the Bees ahead.’ (It was Eriksen’s only goal in his eleven games.) 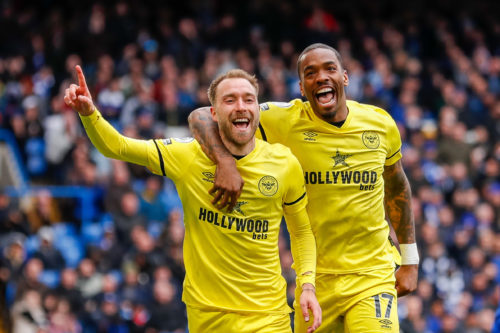 Goals from Janelt (again) and Wissa minutes from the end completed the humiliation of one of Brentford’s greatest rivals. Long before the end, Chelsea fans were streaming from their seats and out of the stands. Oh joy!

Other games bore witness to Eriksen’s influence on the side and the added potency he provided. West Ham, Southampton and Everton were all beaten and the warmth shown him by the visitors before and after the goalless home game against Spurs – his footballing home for years during his previous sojourn in this country – prompted me to write,’ Will he stay? Will a major club snaffle his talent once the season’s contract expires? That’s a conundrum to be addressed at a later date’.

Well, that later date has come and gone, with only a surprise defeat at home by Leeds in the season’s final game to disappoint (and to keep Leeds in the Premium League). Now Manchester United’s gain  and Brentford’s loss of their short-term saviour fuels resentment bordering on hostility that can be detected in West London.

History may well show the opportune signing of a player whose cardiac arrest when playing for Denmark saw him collapse and to all intents and purposes temporarily die on the pitch was the key that unlocked Brentford’s fortunes.

Whether or not Eriksen will see his ambition for Champions League football realised at Old Trafford remains to be confirmed, although he may well see a regular place in the Premier League starting line-up not the shoo-in he would find at Brentford.

Charlie protests that Eriksen was gone and nobody’s business but his own and that of what is now the second of Manchester’s great clubs, but I believe that in looking at what the future might hold for the player who was the fans’ favourites until ten minutes ago I am burying Caesar, not praising him.

This article appered first on the Chiswick Calendar website.