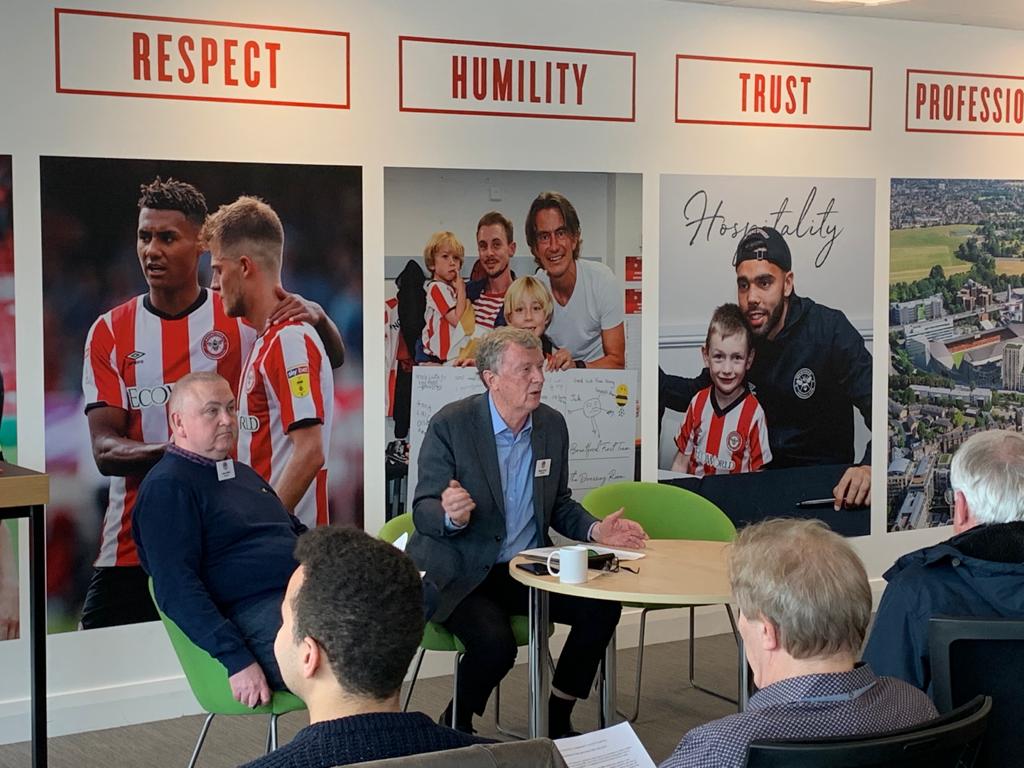 THE BU AGM -THE CHAIRMAN’S REPORT

The Annual General Meeting of the Brentford Football Community Society Limited (Bees United) was held on 7th March 2020 at the club's offices. This is the report that the Chairman, Stewart Purvis, presented to BU members.
Share |

This is the Annual Chairman’s Statement that reports on operations for Bees United (‘BU’) during the year ending 30th June 2019, my first since having taken over at the last AGM from David Merritt. I’m delighted to see that David is here today as is another former Chairman, Brian Burgess.

The football season 2018-19 was Brentford’s fifth consecutive season in the Championship, and fifth top half finish. The most successful period for the club in half a century continues and at the time of this AGM Brentford are in the play-off places, hoping for promotion to the Premier League. We wish Thomas Frank and his squad all the best of luck.

At the same time the new Brentford Community Stadium is almost ready to be formally handed over to the club for next season and the final farewells to Griffin Park are being planned. This is a very exciting future for Brentford Football Club but there will also be some nostalgic weeks ahead as we remember our home for more than a century.

So the playing squad are well placed, the new stadium represents a major step forward for the club. I think the challenge for Bees United has been to raise our game as well. That’s what the BU board has tried to do since we last meet a year ago.

Community
We say on our website that we are committed to strengthening the bonds between the club and the community it serves. We first needed to build our own identity within that community. We have created a logo which you are wearing on your badges, which echoes the club’s own logo but also includes an element of the old club crest which was lost in the BFC redesign -two bees around a hive.This was the starting point for a wider redesign of all our communications which has been well received. The number of people choosing to receive our revamped digital newsletter has increased from 459 at the start of January to 625 yesterday.
We have tried to create content which does not replicate what the club and other fan groups do but instead focuses on the links between club and community. The best and most recent example is the article we published this past week on the B Team kit manager Trish Taylor.
But there is more still to be done especially around monitoring our own growth within this community. For many voluntary organisations aspiring to reach the highest standards, the European directive on data protection and privacy known as GDPR – General Data Protection Regulation- has been a challenge. Our legacy membership systems did not meet that standard and we have been working hard to ensure they do through a process called ‘data cleansing’.We are grateful to those, some of them here today, who have helped us with old and new databases.
One further point on community, the BU representative on the board, currently me, is the adjudicator when a supporter makes a complaint against their club and doesn’t get a satisfactory response. The very existence of this role can be a powerful tool for good.

Sustainability
Our mission statement says ‘Bees United exists to safeguard Brentford Football Club (BFC) so that it has a stable and sustainable future as a professional football club’. The sustainability of the club relies on the investment of its owner, Matthew Benham, the cumulative figure at the end of June 2018 was £113.9m, we expect a more up to date figure soon. It also relies on profitable player trading in addition to normal commercial revenues.The turnover in players is now understood by supporters as an inevitable part of that model.
To help fulfil our mission on sustainability there has been what I regard as a significant development over the past 12 months. The club’s latest accounts which have been lodged with the EFL and will be published in due course are the first in recent times to be overseen by an Audit Committee on which I serve. When you see the accounts you will know that as part of good governance they have had the right level of transparency and scrutiny.
Overall I can report that under the Chairmanship of Cliff Crown and with a management now led by CEO Jon Varney the club seeks to have the same high standards of business professionalism and governance as it has achieved on the pitch in recent years. I have also supported Jon in his wish to engage with BIAS and other supporters groups.

BU Board
Finally let me say a few words about own own Bees United Board. Every member has played some part during the past year. Special thanks to our Secretary Chris Tate and our Treasurer Jim Walsh. John Scott has worked hard to sort out our technology, Bill Hagerty writes our home match reports, Greville Waterman and David Anderson contribute their football insights for our newsletter and website, Ron Cooper has a special interest in safeguarding the club’s history and heritage, Jon Gosling who was once a BFC Board member is our corporate memory man and Andre Sawyers organises the match-day visits by BU members to the club’s boardroom and directors box. My thanks to them all. In addition I would like to thank Trevor Inns for his technical help with our digital migration.

On the home page of our website we now say:

‘We are proud of our club and its progress since Bees United ensured its survival.

I’m sure all of us as Brentford supporters and BU members will take that pride and that confidence into our new stadium.