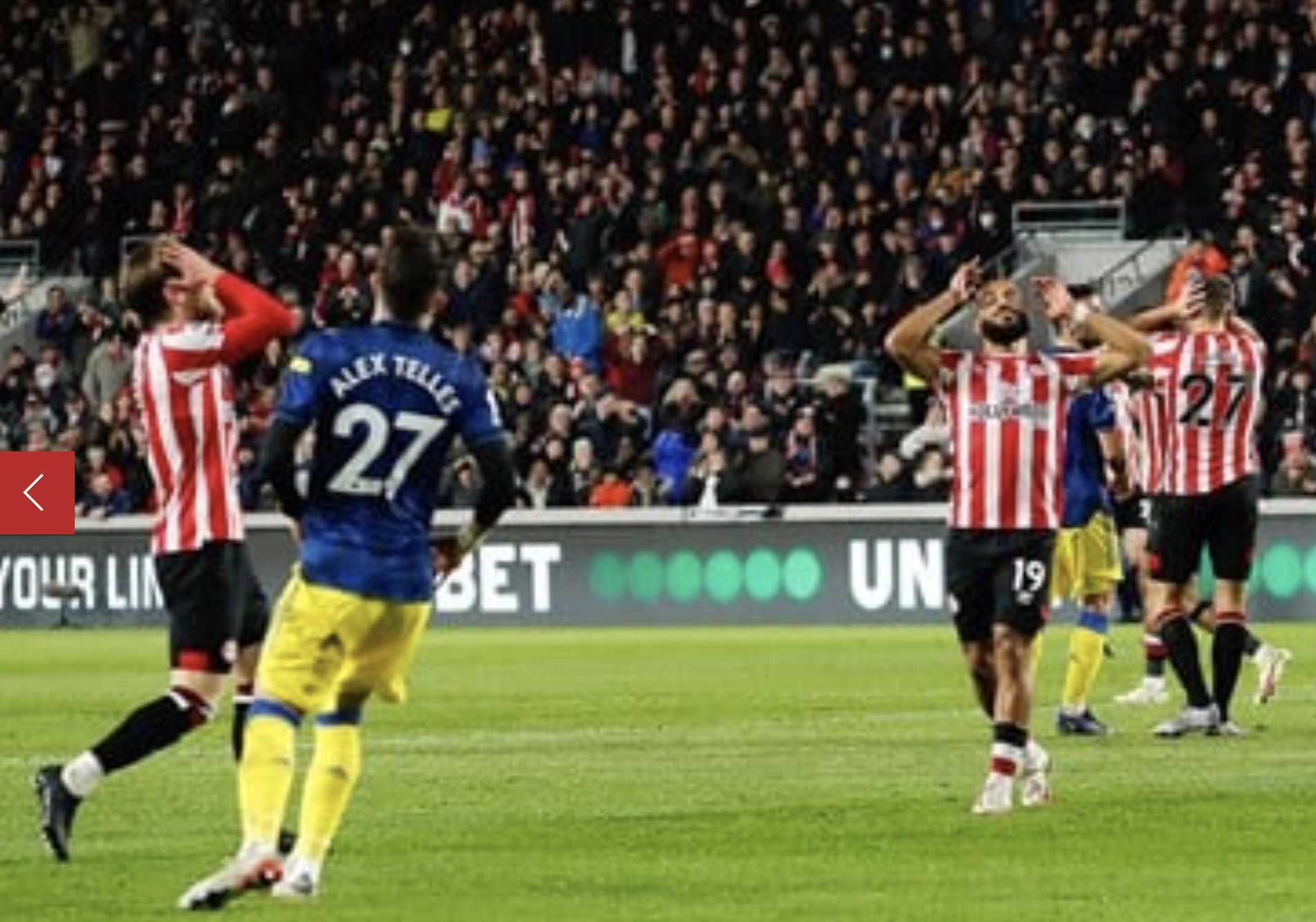 It was definitely a night for heads in hands. Brentford missed chance after chance during a dominant display in the first half. Bill Hagerty was there.
Share |
more

If ever a game justifies the cliché of football being a game of two halves, this was it.

For forty-five minutes Brentford pummelled the visitors, with only inadequate finishing and the brilliance of keeper David de Gea preventing them reaching the interval a goal or two ahead. In the second half, United pulled themselves together, went in front and scored two further goals before the Bees resumed where they had left off earlier and snatched a goal of their own – a consolation score as it is known, although there was little evidence of them being consoled.

Let’s concentrate on that first half display for a moment. Here was Brentford at their scintillating best, dominating what was a cracking game right up to the moments when they came close, but not close enough, to scoring.

Jonas Lössl, preferred in goal to the hapless Alvaro Fernández, was largely a spectator as United weaved pretty patterns of passing without taxing him unduly. At the other end, chances came and went. Mathias Jensen, hardly an accomplished sharpshooter at the best of times, tested de Gea so much that he cleared the ball only with an extended foot. Christian Nørgaard fired an effort too high. Three Brentford corners won in quick succession had the visitors reeling.

This was an unexpected turn of events for United, a team worth billions if you include those on the bench, being spanked by West London’s Premier League newcomers valued at, say, less than fifty million. Surely there will be Premier League spendthrifts getting in line when the transfer windows come around.

The United front-runners stuttered like a cheap firework, with Cristiano Ronaldo so rarely in evidence that the juveniles in the crowd delighting in booing him whenever he touched the ball soon stopped, presumably on the grounds of boredom.

But the second of the two halves arrived with a different complexion. There was barely time for Ivan Toney to head against the United crossbar and Jensen to attempt a long-range lob that didn’t trouble de Gea and a soft shot into the keeper’s arms that might have been described as being served up on a plate had a plate been handy, before United took control.

First Fred pierced the home defence with an immaculate pass that enabled Anthony Elanga to head past Lössl; then Ronaldo chested the ball forward to Bruno Fernandes whose run and cross set up Mason Greenwood to add a second.

With a two-goal cushion, United slowed their involvement to a funereal pace, blatantly so when Diago Dalot paused to re-tie a bootlace slowly while Mads Sorensen waited by the nearby touchline to take a throw-in. The crowd hooted and interim manager – now, surely there’s a first! – Ralf Rangnick made substitutions that included the bad-tempered departure from the field of Ronaldo.

But United hadn’t finished yet and it was the industrious Fernandes who supplied the cross for the recent arrival from the bench Marcus Radford to make ground before rendering Lössl’s dive redundant.

Dispirited but not despairing, Brentford retaliated by swarming forward to find something to write home about, if only to their mums. Jensen made way for Yoane Wissa, who immediately became an irritant to the United defence, and Shandon Baptiste, having earlier replaced Vitaly Janelt, fizzed creatively.

The excellent Bryan Mbeumo continued to harass the defence and Toney snatched a goal from close in – nice to see him on the scoresheet again – with just five minutes to play; too little, too late and less than Brentford deserved, but at least establishing something for the home fans later to reminisce about while bemoaning the injustice of it all.

‘United are unbelievably lucky,’ observed a frustrated Thomas Frank at the close.

Funny game, football, I mused to my mate Charlie.