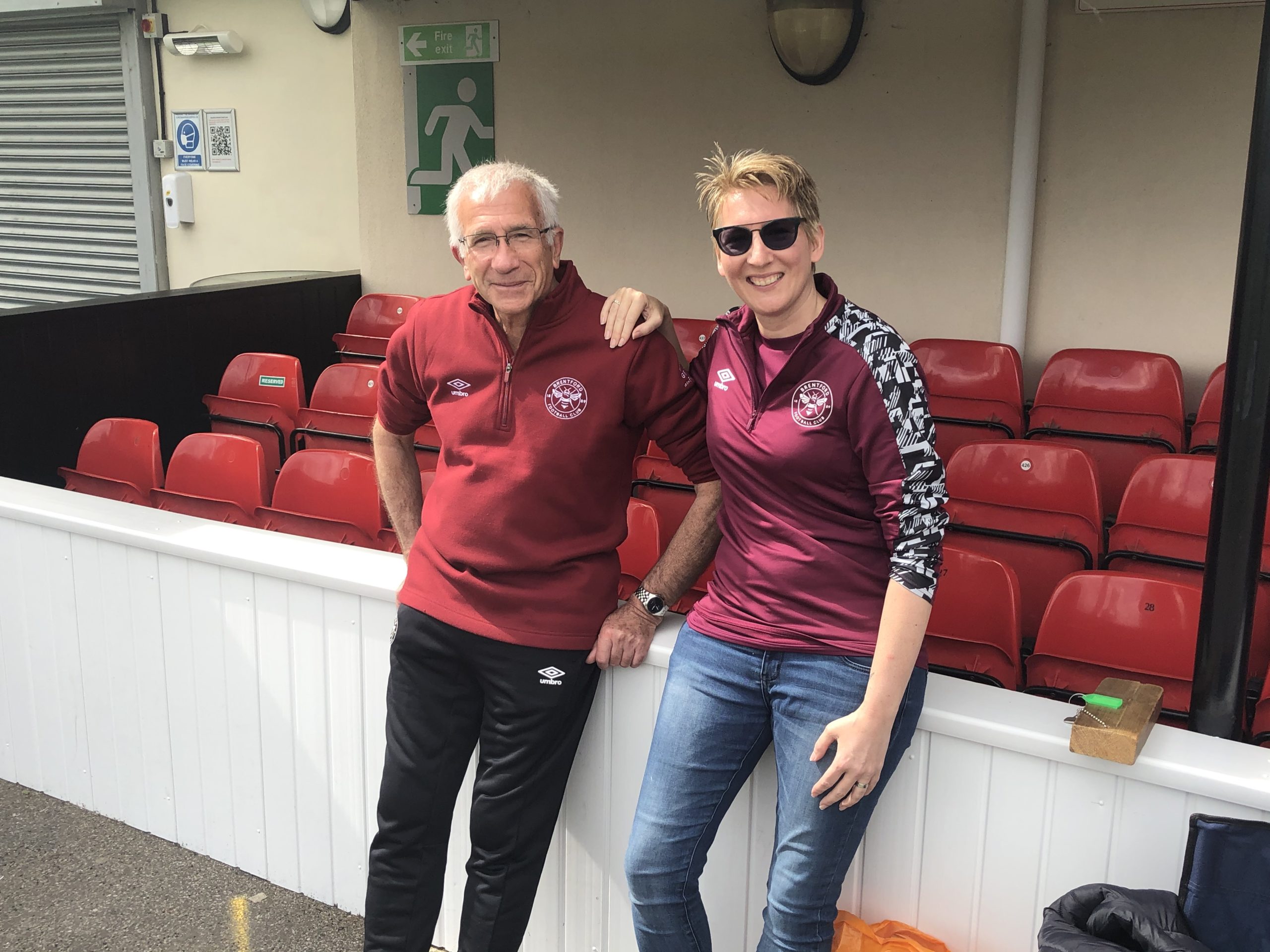 Father and daughter Bees fans Roger and Amy Crook have steered their Women's team over 30 years into a growing and successful relationship with Brentford FC.
Share |

Brentford FC Women have had a successful season and they are not finished yet in celebrating the 30th anniversary of the first time women played in a league in Brentford colours. A 2-1 victory on the iconic Hackney Marshes against Hackney Women’s Reserves confirmed Brentford’s Development Squad, effectively the Women’s B team, as winners of Division Two North of the Greater London League. The next week they won away again, this time at Actonians and were crowned Champions having won every league match this season. After the victory at Hackney First Team Coach Karleigh Osborne tweeted ‘fantastic achievement by the team! They’ve worked really hard this season & deserve it”. Brentford FC chairman Cliff Crown sent ‘many congrats on winning the league’. 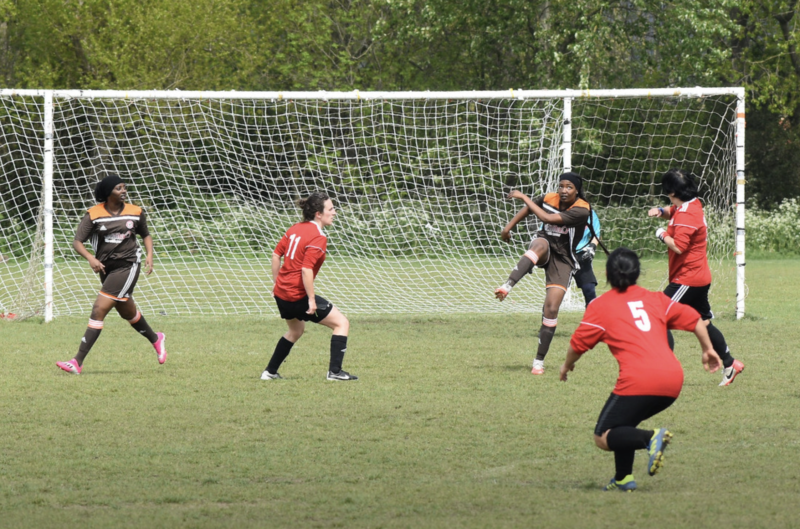 On the same  day, 9th May,  Brentford’s First Team put up a spirited fight back against Walton Casuals, the dominant team in the Premier Division of that League, before going down 4-2.The following week they beat Clapham.They have also got through to the quarter-finals of the Intermediate Capital Cup which will be played on June 6th, kick-off 2.30 at the Bedfont Sports Club. 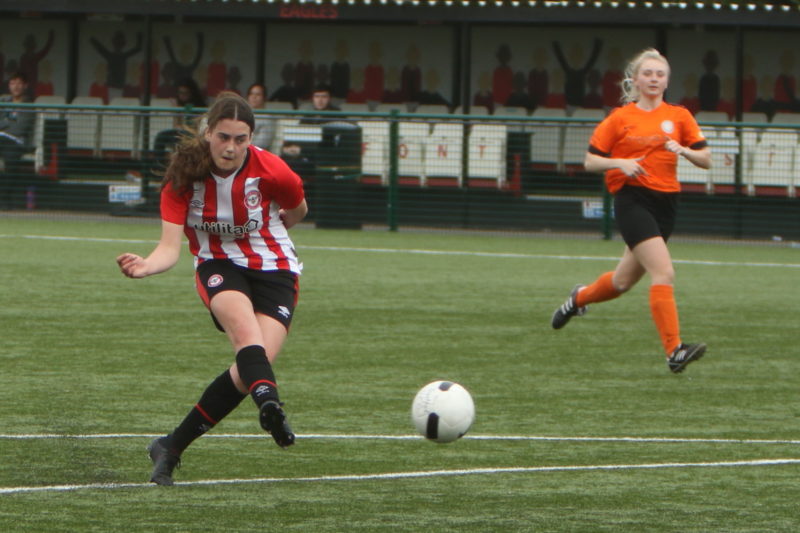 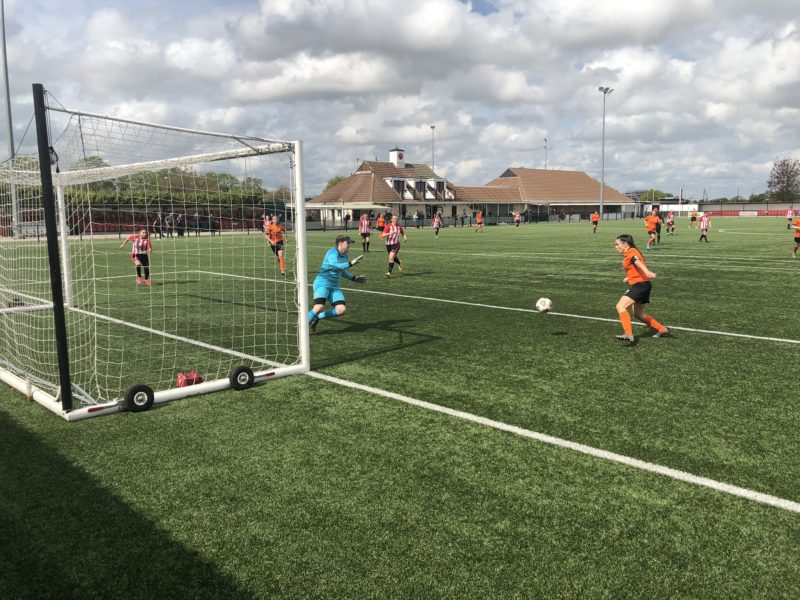 It was the 1991-2 season when Brentford first entered the League. Roger Crook had started a team when his daughter Amy got passionate about football. It was called ‘Brentford Women’s Football Club’ and the link with BFC was informal. Now as women’s football is increasingly welcomed and integrated into the main club structure Roger is still involved and daughter Amy is Brentford’s General Manager of Women’s Football. “I was always playing football” says Amy “I started at 12 but had to stop at 31 because of injury. But later I got a Level 2 FA coaching badge and went into player management after that.”

The Women’s Football pyramid in England is even more complicated than the men’s but basically the County Leagues, as they are known, form a 7th tier of the women’s game. Normal promotion rules are suspended because of COVID but the FA have indicated they will consider applications from clubs who want to move up a league from the 7th tier this summer. As the first team are in the top three Brentford has applied for promotion.

Winning a League title in Amy Crook’s first year in her new role is a symbol of Brentford’s ambition at a time of growing interest in the women’s game across the UK. In addition the Brentford Community Stadium will be one of the venues for the Women’s Euros next year. Amy Crook says Brentford Women now have “a team of committed and qualified coaches headed up by Brentford legend Karleigh Osborne who is in his third season with us”. She believes the First Team are capable of moving up from the 7th tier to the FA Women’s National League level which is Tier 4. 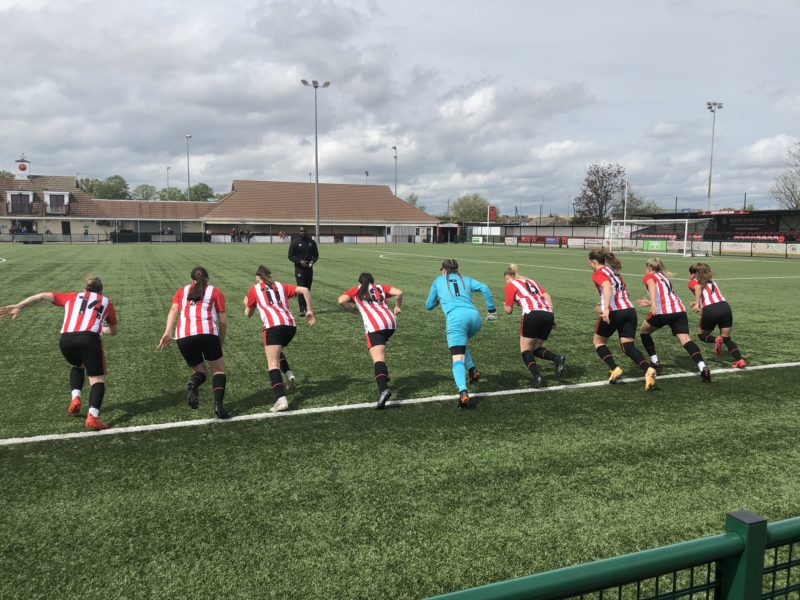 Karleigh Osborne prepares the First Team for the game against Walton at Bedfont Sports Club.

Roger Crook told Bees United: ” I would like to say a huge thank you to Brentford FC, Jon Varney in particular, plus Sally Stephens, Jon Burr and Amy for all their help and for what they have done in helping to push the Club forward. I know it will progress and achieve so much more in the future to make it an even more outstanding Club to belong to. I have been exceptionally lucky with all the Coaches and Players,Committee Members  and Parents whose attitude and help is first class. Without them there would be no Brentford FC Women so they also deserve a huge thank you and long may they continue the journey with us”.

Amy Crook started doing coaching badges and player management from as early as 18 years old but she may be a more familiar face to Bees supporters from Griffin Park where she was the Community Sports Trust’s Match-day Community Co-ordinator shepherding BuzzBee and visitors into position for photographs before games. She was also Office Manager for the Trust where she worked for a total of 27 years before moving over to the Club itself last September. 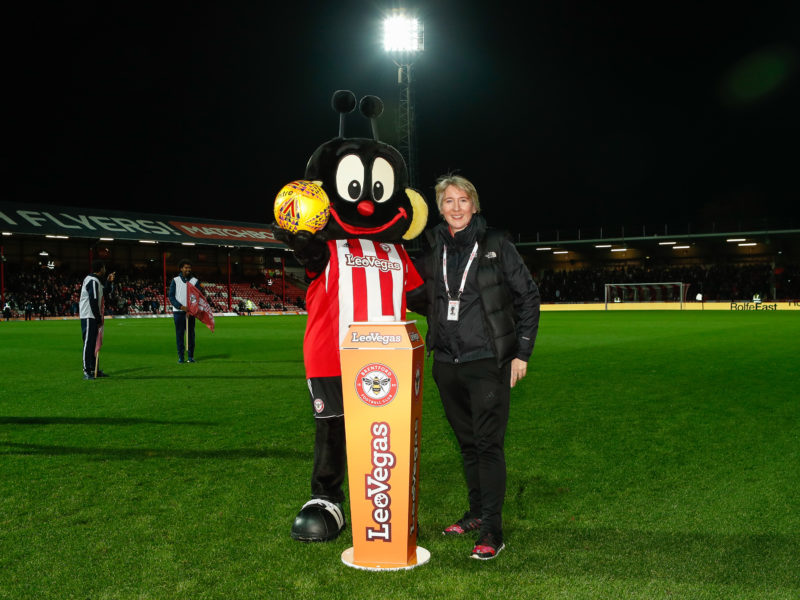 Amy Crook with BuzzBee before a game at Griffin Park in 2017.

Both women’s teams play their matches at Bedfont Sports Club which has high quality ‘3G’ pitches and a pitch side bar and cafe for spectators. Training is now on Wednesdays at the Gunnersbury Park Sports Hub where the Trust also has a new base and back at Bedfont on Fridays.

Brentford FC Women have been holding First and B team trials during May and more information is available from Amy at ACrook@BrentfordFC.com.