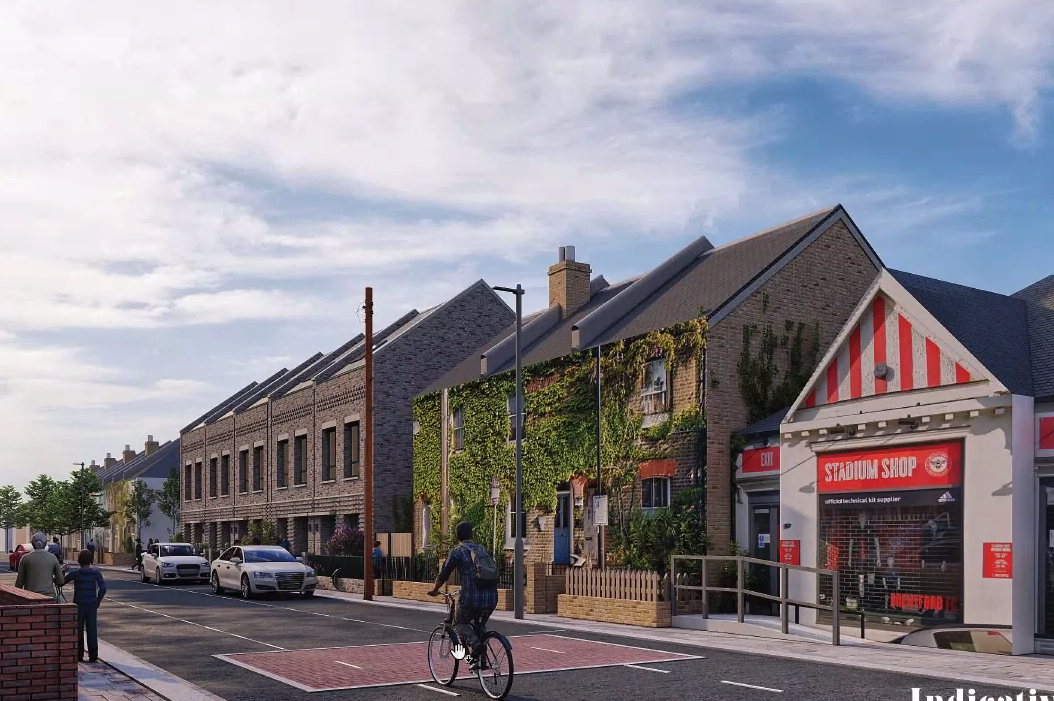 AS DEMOLITION STARTS,WHAT’S NEXT FOR GRIFFIN PARK?

As demolition started at Griffin Park the developers have been talking about what they are going to build. And why might the name 'Davis' be chosen to be remembered there.
Share |

The first sign that something was stirring inside a deserted Griffin Park was a photo on social media, taken over a fence, showing a mechanical digger poised for action. 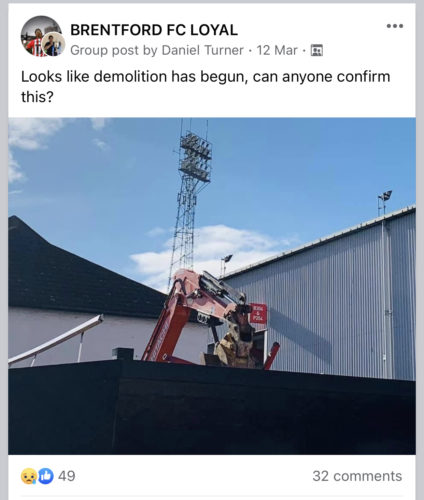 Confirmation of a kind came on a new website launched by Ecoworld, the developers who bought Griffin Park from the club. The timeline on the website said ‘Demolition of the Griffin Park site is beginning in Spring 2021 and this should be completed in early 2022 which, if the application approved, is when construction of the proposals is expected to begin’.Then came tweets of pictures of the turnstiles at the Braemar Road entrance being demolished. 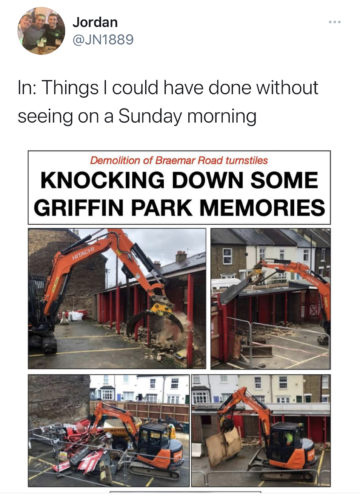 The reaction on social media was restrained: ‘I know its inevitable and must now take place but I will not be watching, too many memories’ posted Nick Hopkins on Facebook. But some fans were interested or curious enough to know more that they took part in a zoom consultation held by Ecoworld on 18th March for Bees supporters. The good news that fans took away was that the green space at the centre of the housing will be open to the public, it won’t be a private estate like the former Arsenal stadium at Highbury. So we will all be free to go and stand where the pitch was and bore future generations with our tales of how we watched from the terraces. 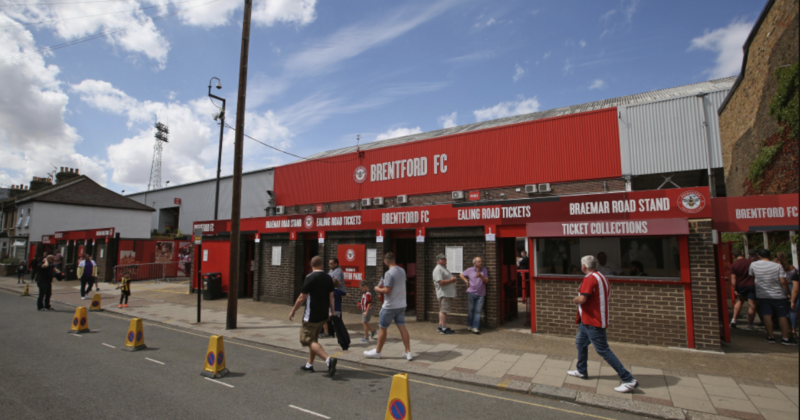 Inevitably the plans mean that what was effectively the front door of Griffin Park, the entrance in Braemar Road, will change dramatically. Only the Stadium shop will remain, for as long as it is open. 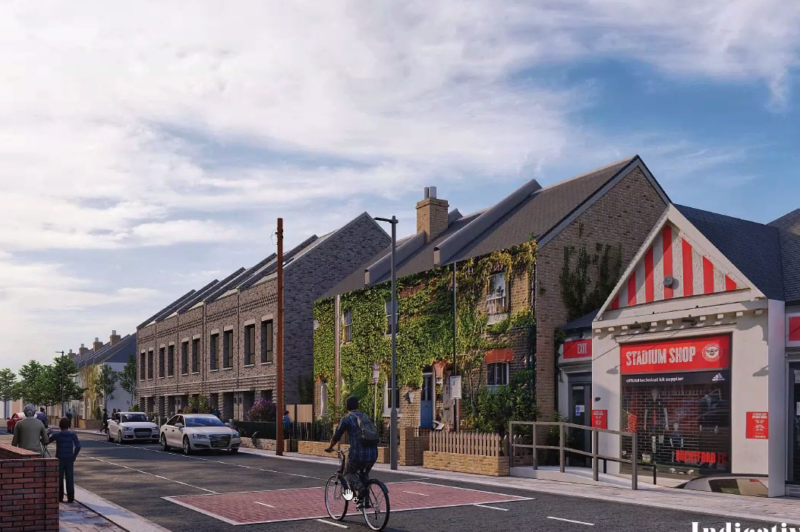 Ecoworld say they want to create ‘a broad community by including different housing types’.There will be 149 new homes.

The new plans for what was the pitch have changed from what was originally agreed with the local authorities. ‘The existing permission’, as it is called, was for a design with a ‘memorial garden’ in the centre, recognising that the site was once a football ground and that the ashes of some supporters were scattered on the pitch. The revised application is for a ‘community park at the heart of the development’. 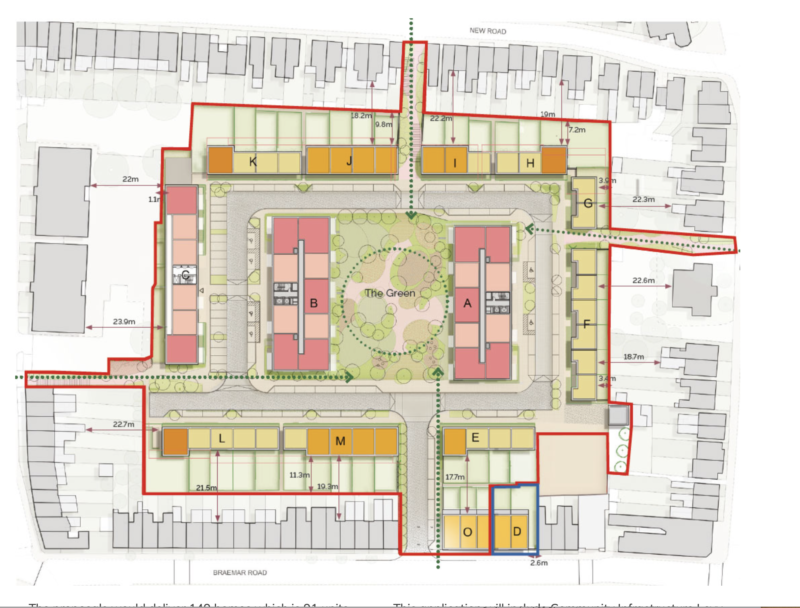 Ecoworld say ‘The new park area at the centre of the site overlaps with the current location of the existing Griffin Park football pitch centre circle’. There will be an area, provisionally called The Hive, which will include ‘reflection benches’ (number 4 in the diagram below) and ‘information board/plaques for past and future information Brentford FC (number 2). Ecoworld showed what they stressed were  ‘indicative’ images. They say they are keen to hear views from Brentford supporters. 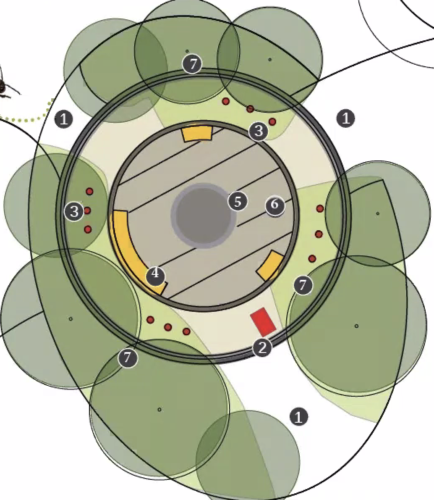 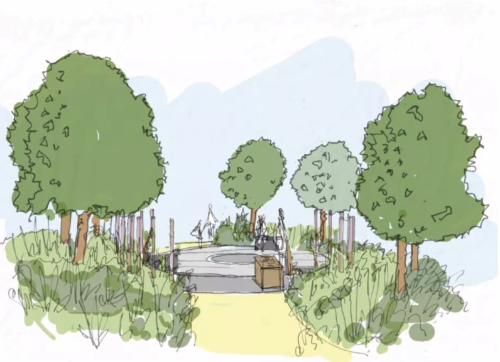 The information board or plaques will probably be the only direct reference to Brentford FC, although there will be some  indirect ones such as calling this area ‘The Hive’. Dudley Gabriel, Development Manager at EcoWorld, told Bees United: ‘The application developing Griffin Park to provide new housing and public green space will be a fantastic addition to the Brentford neighbourhood and one worthy of the former stadium’s rich heritage.The proposal will include a 1,800sqm public park which will include a reflective area – at the exact spot of the current pitch’s centre circle – for people to come and recall the history of the site and the memories shared there. We have met with Brentford fans to hear their ideas about how this area can best reflect the legacy of Griffin Park and Brentford F.C.While the planning permission will set how the development will be built, once it is completed EcoWorld will continue to play an active role in Griffin Park and work with the community to ensure that the site, especially the new park, grows and celebrates local heritage for years to come.

Ecoworld also say they want to ‘celebrate the heritage of the site’ and  ‘New roads will be named ‘after people important to the history of the area’. The plans on the website have working titles such as North Street and West Street but on the zoom call Ecoworld floated the idea that the pedestrian walkway from Ealing Road into the heart of the development should be titled ‘Davis Way’. It was explained that this had been suggested by a local councillor.

On the zoom call the Davis name didn’t seem to mean much to Bees supporters so we consulted the Brentford historians. Rob Jex discovered: “There were 8 Davis children born to bricklayer Albert Davis (1862-1948) and his wife Agnes . The two with the deepest Brentford FC connections appear to be the first born, Harry Frank Davis 1888-1964, and his younger brother Frank Albert Fladgate Davis (1891-1978)  Harry was a BFC Director and was President of the club when he died in 1964. Frank Davis had the most enduring Bees link. He sold programmes outside York Road in the Southern League days, joined the BFC board in 1929 and was Chairman from 1943-61, and President thereafter until his death in 1978.”

The names of the two men often appeared in the list of the club hierarchy in the programmes but Rob thinks “It would be a curious decision to name a street after them in a Brentford FC context. While both brothers were board members during Brentford’s rise to the First Division in the 1930s, Frank was chairman as the club went into steep (and deep) decline between 1943 and 1961 as it fell from the First to Fourth Divisions.” 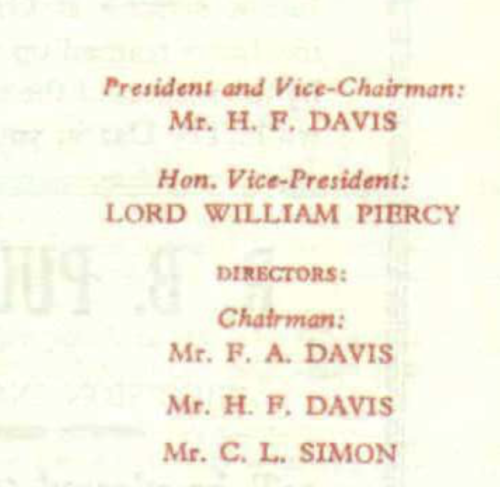 A third brother ,George Davis (1890- 1974), owned a garage in Ealing Road which was an advertiser in programmes as early as 1936 and as late as 1969. One from the 1936-7 season (bottom right) emphasises that the garage is opposite the Ealing Road entrance to the ground and that it is the ‘only car park near ground’. Fellow historian Greville Waterman said he’d heard that Bees fans would leave their bicycles at the garage. 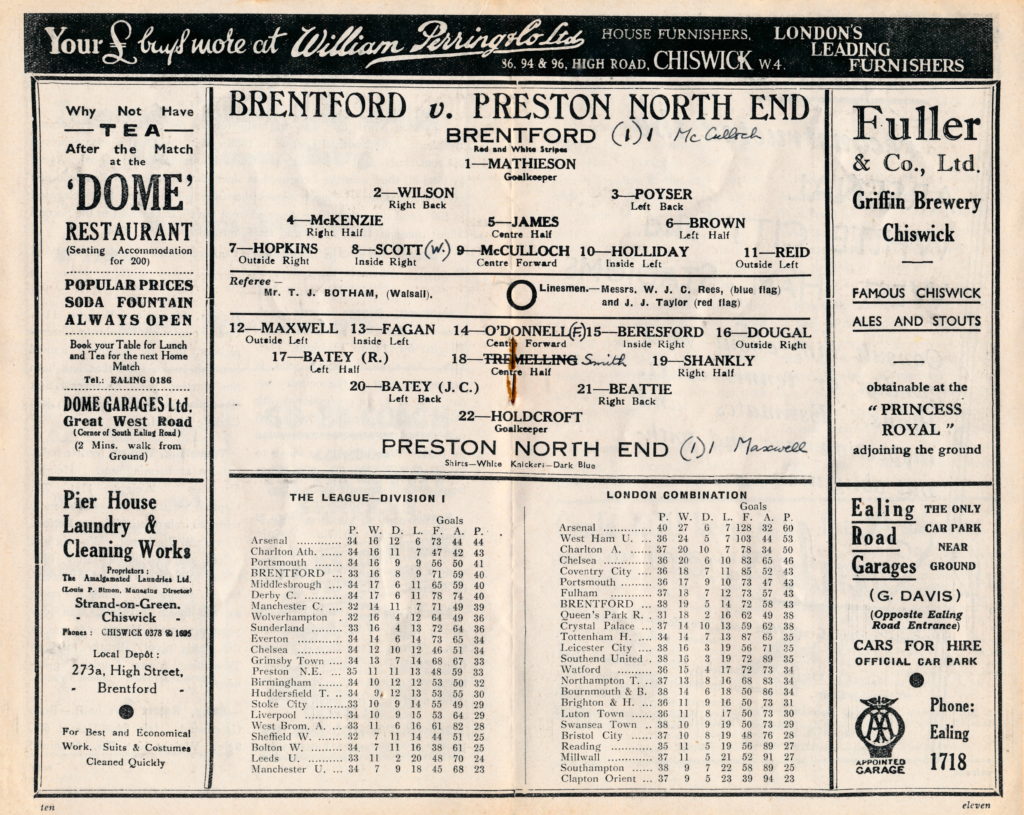 The Ealing Road Garages advertisement is bottom right. Note that in the Division One league table, Brentford are fourth and Manchester United are bottom.

Rob Jex has also spotted that in an aerial photograph take in 1957 what looks like a garage is visible in Ealing Road opposite the Griffin Park entrance. 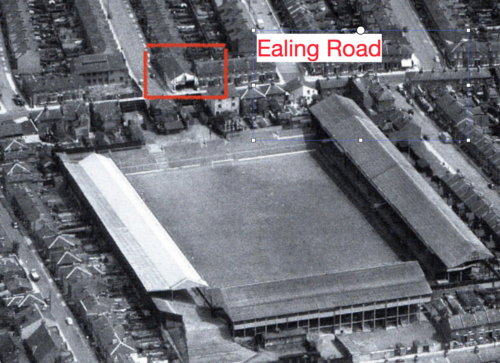 The pedestrian walkway that might be named after the Davis brothers is directly opposite the garage but Ecoworld says Davis is one of many names up for consideration and they encourage further suggestions. From Bees expert Dave Twydell came: ‘Archer Green’ (who called the first meeting), ‘Bill Dodge’ (who was at the first meeting, became a player, and was the club President in 1960 -71 years with the club!), ‘John Strachan’ (founder-member, later president) ‘Harry Curtis’ (most successful manager) or ‘Dai Hopkins’ (most capped player – until recently!)’.

An online straw poll of fans by Bees United produced support for a ‘Harry Curtis Close’ but also a ‘Gilham Gardens’, an ‘Owusu Drive’, and even ‘The Jim Towers’ ,’Push Up Brentford Way’ and ‘Terry Hurlock Boulevard’.

You can see all Ecoworld’s proposals for the future of the site and give your feedback.