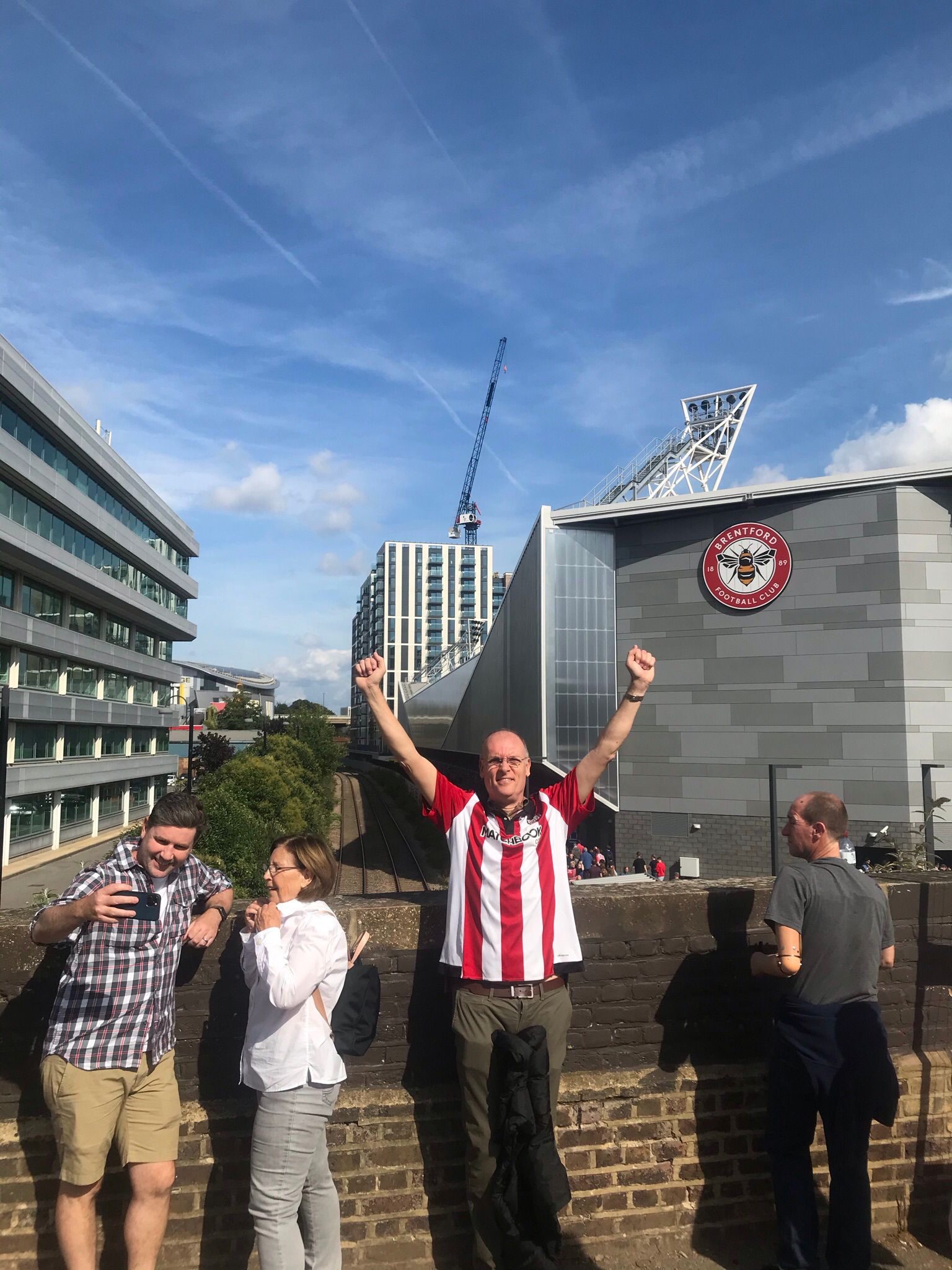 We always like to hear from our members. This month we’ve got an article sent in by Ralph Tebby celebrating his ’50 years as a Bee’.
Share |

On September 27th I’ll be 50 years a Bees fan, which is surprising for two reasons. Historically my family had no interest in football and lived in Acton within 2 miles of QPR! My father was an Ealing based builder and happened to be working for a lifelong Brentford fan a few doors down from Eddie Lyons (the then Bees Physio) on Ealing Common. Dad said he had no interest in football but told him I was football mad!  I was too young for 1966 but the 1970 World Cup (in colour!) captivated me. Recreating Rivellino’s banana kick in Walpole Park became an obsession. 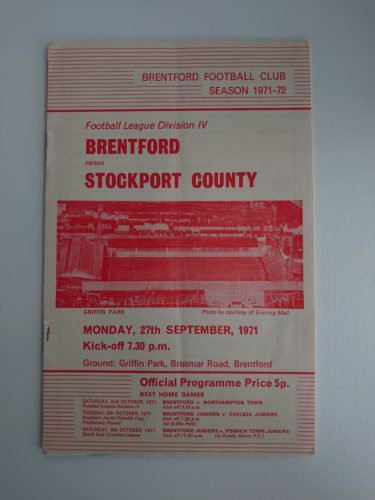 I went to my first game against Stockport County on September 27th 1971, a Monday night game, which we won 2-0. I was told this could be a promotion year particularly with the previous year’s FA Cup run ending at Hull and the signing of my all-time favourite striker, John O’Mara.  Getting to the match involved a walk from home, near to what was then Ealing Tech, down to GP. One day, the start of the journey was punctuated by the cry of “Ollie Ollie Ollie” which turned out to be Jack Holliday! 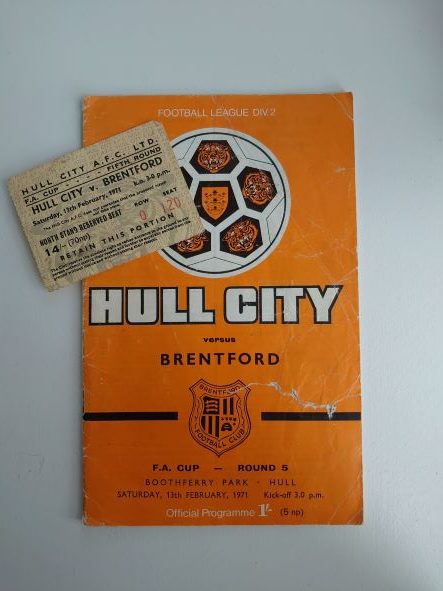 Other early memories included the 6-2 demolition of Darlington, Barry Salvage bombing down the left wing and the Andy Woon hat-trick on his debut. I also remember a brilliant end to end game with Mansfield Town, eventual champions, which ended 3-2 to them after we got to 2-1 up after their opener.   In later years Cup runs to Liverpool (went up on a minibus with Terry Evan’s dad!), Charlton and Southampton will stick in the memory.

Cup Finals, on the other hand, have been our nemesis. My bucket list of my team winning a final and being on Match Of The Day have been realised!

Over the years I’ve been lucky enough to meet some of our great legends. Lloyd Owusu on a trip back from Cyprus (Lloyd you still owe me a pound for your airport trolley), Richard Lee supported my goalkeeping coaching, I met “Super Kev” at a non-league cup final and played against Dean Holdsworth a couple of years ago in an over 50’s game!  Geoff Buckingham is also “very lucky” to have watched me score two goals for Ealing Estate Agents in the late 70’s  – a rare occasion when I was deemed “too good” to be in goal!

However, my long term treasured friendship is Alan Hawley and his family. I’ve known Alan a good while now and he was guest of honour at my 50th . 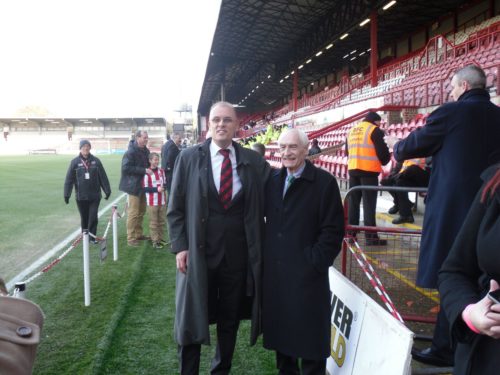 GP is a big miss for me but I know we have outgrown the club although I do have a constant reminder of those early days when I hear Mr. Gilham’s dulcet tones. If anyone deserved to lift the cup! What a brilliant gesture – I STILL can’t believe it! 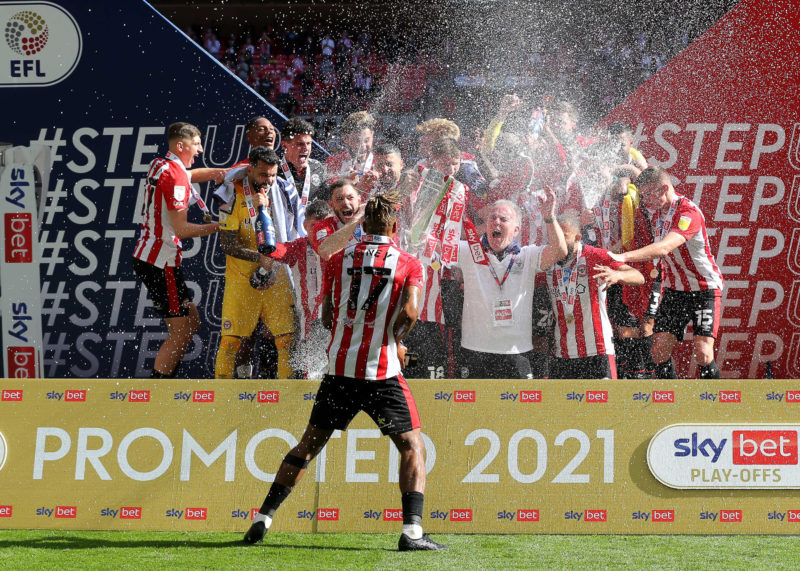 My hope for the future is that we retain our “family values” and push on for further success, which I am personally very optimistic about.

PS: Anyone who printed out a ticket in recent years can spot me in the red banner that goes out with the confirmation. I’m with my son Rob on the right, he has already done a quarter century!

If you would like to write an article or send in a picture please email admin@beesunited.org.uk