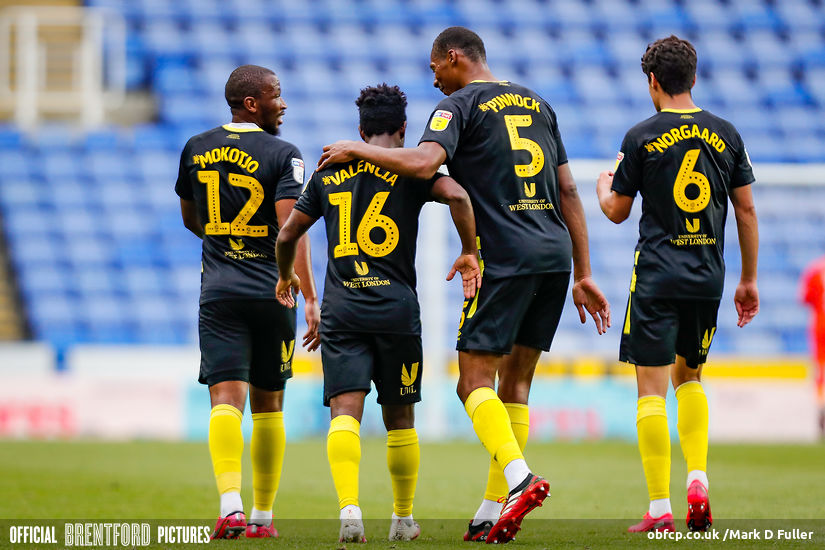 Three goals away from home, four clean sheets in a row, it just keeps getting better for the Bees.
Share |

Our latest Behind Closed Doors report comes from inside the empty 24,000 seat Madejski Stadium where Brentford FC Deputy Chair Donald Kerr (far left) saw the Bees move ever closer to the chance of an automatic promotion slot. 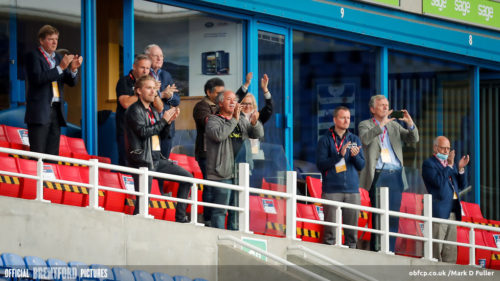 The end of June and, in any normal year, we would just have finished two months of transfer rumours, and genuine transfers, and be gearing up for the first pre-season against a local friendly club like Borehamwood or Wycombe Wanderers. Instead, we’re travelling to the Madejski Stadium for the third hugely important game in this mini tournament at the end of the season. Having watched the first game on TV, and the second at Griffin Park, your reporter was interested in the away experience in a big empty ground.

Having handed in my completed questionnaire confirming that I didn’t have Covid 19, and having had my temperature taken, and donning my Brentford mask, I was ushered up to the corporate box allocated to the BFC supporters for the evening, all ten of us, Unlike the normal convivial atmosphere at away matches, as at home, we were left entirely on our own, with two rows of seats outside the window all carefully marked out for the game.

The only remarkable thing about the atmosphere was that we actually had crowd noise in the stadium, something not experienced at either of the two previous games. Just like TV, the noise was totally unconnected to the activity on the pitch, and it was strangely distracting, rising and falling regardless of the rhythm of the game itself. When we went 3 nil up, this provoked one of our number to comment, “fair play to the crowd, three nil down and they haven’t let it get them down”.

In truth, Reading were probably happy that their supporters were not present, such was the lack of energy for the fray being shown by their representatives. From the very first minute, Brentford forced them back and were relentlessly on the front foot for the entire first half. The stats on the BBC website credited Reading with 45% possession in the game, which hugely exaggerates the impact they had, and came as a surprise to those of us in attendance. The Brentford midfield were dominant and only a poor final ball or occasional poor decision made by those in front of them prevented the Bees from being much more comfortable at half time. Bryan, Ollie, Said, and Emiliano all had opportunities to increase the lead, but dogged defending by the back four, and Morrison especially, kept it closer than we would have liked. The goal that broke the early frustrating stalemate was that familiar set piece of Ethan at the back post heading it into the middle for one of his forwards, on this occasion Bryan Mbeumo, to help it in. In the eerie silence that greeted the goal (well eerie silence apart from ten supporters on the top level) we had every right to expect that to start a rout, given the lack of offensive threat from the home side.

The only threat appeared to be from a long ball to the unfair physical competition between Meite and Rico Henry, but after a few such tussles, Rico got the measure of his much bigger opponent and emerged clear winner as the game progressed. There was one moment in the first half when a headed clearance by our defence was hammered goalwards but it hit a defender and the subsequent corner was easily dealt with

All Brentford supporters will be familiar with the deep seated discomfort of a Brentford team so dominant and yet only one slender goal ahead. However, the second half took exactly the same shape as the first, and with the exception of a couple of very decent crosses, neither seemingly troubling David Raya very much, Reading, if anything were even less threatening than in the first 45. John Swift, who is clearly a  talented and technically accomplished player was overshadowed by our own midfield duo of Josh da Silva and particularly Christian Norgaard, my own man of the match, and although Ajaria showed touches of brilliance, they were not touches in dangerous areas. Josh deserved his goal, not merely for following in the shot and picking up the rebound, but for his relentless work across the pitch until his substitution almost immediately after he scored. Shandon Baptiste picked up where Josh left off and together with Joel Valencia, Bryan’s replacement, ensured that Reading were given no chance of getting back into the game. We were just discussing how little opportunity Joel has had in a Brentford shirt this season to show us what he can contribute when he unleashed that astonishing and completely unstoppable shot that topped off the game, and produced the score the performance had deserved. It was good to see Mads Roerslev make an appearance and, as on previous occasions, he looked very comfortable. And Kamo Mokotjo’s 10 minutes at the end only served to underscore the strength in depth of this impressive Bees team.

As a footnote, and a further reflection on these very different supporter experiences, it is interesting to hear the players communicating with each other on the pitch throughout the game. If anyone had any doubt about the influence that Pontus has on our performances, they would be removed on hearing him organise us at set prices and constantly but selectively directing things from the back. All things considered though, I’d rather have him drowned out by 10000+ fans – real ones not just on a mad uncoordinated soundtrack.