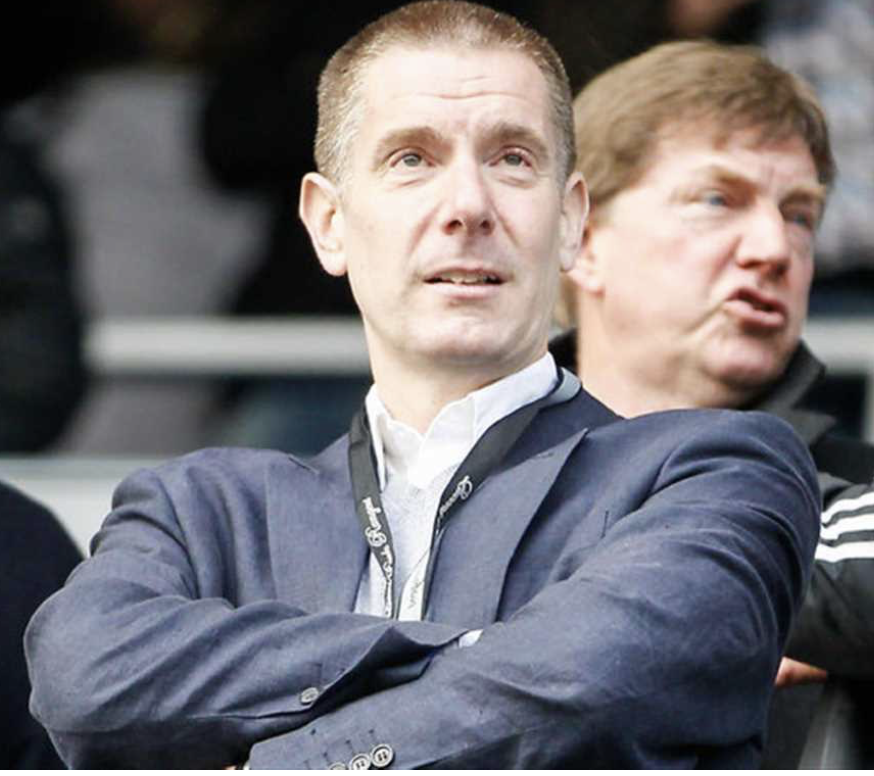 UOL (Universo Online), based in Sao Paolo Brazil, is the world’s largest Portuguese language web portal and sports streaming service.This month their reporter Joshua Law wrote an article about Brentford after interviewing the Chairman of Bees United and Billy Grant of Beesotted. Joshua has kindly agreed that we can publish this translation.

In the small stadium of Brentford, a team of the second English division, it is common to hear the fans praising one of their idols. “There’s only one Matthew Benham”, they sing (‘Só tem um Matthew Benham’ in Portuguese) But Benham is neither the team’s top scorer nor the sheriff of the defense: he is the owner of the club, the one who transformed the way Brentford faces football and created the possibility of the team reaching the Premier League. The recent success of Brentford, due to the analytical intelligence methodology created by Benham, unusual in the world of football, is the reason for the veneration. A fan of the club since childhood, he uses data and methods developed by his sports betting company

This way of thinking also influences Brentford’’s organisation and even training. With this, the team is able to achieve a level of performance above that which would be expected for a club with its budget. Before English football stopped because of coronavirus, the team was fighting with much richer and more illustrious opponents for a precious spot in the millionaire English Premier Division. Today, despite having the fourth smallest budget in the Championship, England’s second division, Brentford is fourth on the table. In the last five seasons, since moving up from third division, it has never finished out of the top 11 out of 24 clubs. In addition, he profited more than £ 120 million from selling players in the same period.

After graduating in physics from Oxford University, Benham made a fortune in the world of sports betting. He realised that, with his mathematical knowledge, he could build models to predict the results of football matches more accurately than bookmakers can predict. Benham set up a company, Smartodds, hired professionals with a doctorate in statistics, and started building his fortune.

In 2006, he helped to clear the £ 3 million debt when the club was on the verge of bankruptcy. In 2009, he became Brentford’s largest shareholder. Benham was investing money and implementing his sophisticated analytical methods, and the team went up from the fourth to the second division.

Stewart Purvis, director of Brentford and president of the fan association, Bees United, explained to UOL Esporte how the model works: “It is to gather as much intelligence as possible about players and matches, so that we can make the most scientific prediction. This is how [Benham] makes money, and the idea is that you can use the same data to manage a football club. You can find valuable players that other clubs don’t see”.

The analysis department looks for young athletes in less popular championships that perform well, but have not yet finished their professional development. After looking at the data, analysts watch videos and, if they like what at they  see, travel to watch the player in matches. “Brentford also looks at the psychological side of the player more than the other clubs,” says Purvis. “It’s a mixture of the best of the old way of hiring with the best of the new. It’s not just the numbers.”

So the club found Scott Hogan in little Rochdale in July 2014, paying £ 750,000. In January 2017, after developing his skills and scoring 21 times in 36 games for Brentford, Hogan was sold to Aston Villa for £ 12 million. In July 2017, Brentford invested £ 1.6 million to bring Neal Maupay from Brest, a French second division team. Two years later, Maupay moved to Premier League Brighton for £ 20 million. These are just two of many examples

This profit from the sale of players is necessary for the club to maintain itself financially. The current stadium, Griffin Park, is famous for being the only English stadium with a pub on each of the four corners, but it only seats 12,763 fans, much smaller than local rivals Chelsea, Fulham and Queens Park Rangers. In addition, there are no cabins or executive areas.

Rasmus Ankersen, Brentford’s football co-director, explained to TalkSport Radio that, because of the low commercial income, “we depend on the sale of players. We profit from the sales, gradually adding value to the squad and gradually improving the level of the squad.”

In the 2019-20 season, Brentford’s highlight has been the offensive trio of Ollie Watkins, Saïd Benrahma and Bryan Mbeumo. The team’s scorer Watkins was in the English fourth division before arriving at the club. Benrahma and Mbeumo disputed the French second division. Watkins and Benrahma were hired for less than £ 2 million each, while Mbeumo cost £ 5 million. Now, according to the newspaper The Sun, Benrahma is being negotiated with Chelsea for a value of around 35 million pounds.

Director Stewart Purvis explains that Brentford doesn’t pay high wages, but is still attractive to young players because athletes know that “they will be well trained and have a stage on which they can shine. The understanding is that if Brentford gets a good offer from a club that can pay a higher salary, they will be sold without complaints.”

After arriving at Brentford, the training that players receive differs from other teams. Ankersen and the head of performance, Chris Haslam, use the services of several experts to help. It has a coach for  lateral throws and another that teaches players the best technique to hit the ball. Athletes have access to a sleep specialist, healthy cooking classes and work with a coach who focuses only on dead balls .

“If you work strategically for a defender to score four more goals from set balls [per season], his value goes up,” Ankersen told Bleacher Report .

To analyze the team’s performance, and therefore the coach’s work, Brentford also uses unusual methods. Directors do not look at the results; focus on other indicators. In an interview with New Statesman magazine, Ankersen said that “your position on the table is not the best metric for measuring success. Football is a low-scoring sport, so random events have a big impact. The ball can deflect, the referee can make mistakes. The best team wins less often than in other sports. “A practical example of this mentality is with the current coach, the Danish Thomas Frank. When he took office in 2018, the team won just one of its first ten games, generating criticism in the press. But Ankersen analysed the statistics, using a tool called xG, or ‘expected goals’, and saw that the team was creating good quality chances and taking kick goals with a low probability of entering. There was no luck. Frank was not fired and in the following ten games the team won six, drew three and lost one.

These changes in the way of managing the club initially generated media criticism and strangeness from the fans. Purvis, director of Brentford and president of the fan association, emphasises that, “at the end of each season, two or three of the best players leave the club. You have to get used to it. It took me a little getting used to. Why sell the best players? Because that is the model and the way to finance the club.”

After seeing the success, fans are more willing to accept that this is the reality of the club, as Billy Grant, a Londoner, fan of Brentford and editor of the Beesotted fanzine, explains. “Brentford is a small club,” Grant tells UOL. “We don’t have the money from Leeds United, Derby County or Fulham. But we love the fact that these teams hate playing against us. We may not have the money, but the methods that Benham uses undoubtedly give us an advantage. There are still a few fans who are not comfortable with the way the club is managed. But it is normal in a sport like football, where people are very, very resistant to change.”

Another modification that was initially frowned upon was the closure of the youth team. The club was spending £ 2.5 million a year to maintain its young player training center, but Ankersen and Benham saw that it was producing few athletes of sufficient quality to serve on the professional team or to be sold. And the few potential players they had at the base were being signed, at 16 or 17 years old, by bigger clubs, like Manchester United and Manchester City, without Brentford receiving adequate remuneration.

Instead of paddling against the tide, Benham, along with former technical director Rob Rowan, who died at the age of 28 in 2018, decided to found ‘Brentford B’, a squad of players aged 17 to 21 who are likely to become professional athletes. Many of the players at Brentford B have been rejected by larger clubs or are European talent looking for an opportunity to play in England.

The team does not compete in the Premier League under-23 championship; instead they play friendlies against teams from all over the world and semi-professional competitions against other English clubs. Since the beginning of the year, Brentford B has faced Chelsea under 23; FC Liefering of the Austrian second division; the Chinese Beijing Renhe; the South Korean FC Seoul, and Pafos FC, Cyprus, among several others. Everything is done for young people to gain experience in different situations.

Supporter Billy Grant says he was disappointed when the youth squad closed because “every fan likes a player trained at home”. But he understands the reason for the decision. “Brentford B’s success is proven”, he highlights. “So much so that he has trained 16 players for the main team in the past four years. One of those players, Chris Mepham, was sold to Bournemouth for £ 15 million.”

Fortunately for fans, all of this profit is geared towards improving the club’s team and infrastructure. Next season, Brentford is due to play in a new, modern stadium a mile from old Griffin Park. Brentford Community Stadium will leverage the club’s income, with increased capacity and new executive suites. The fans, of course, expect the first games in the new home to be against the big ones in the Premier League.

There are eight games left to end this season and, with 60 points, Brentford is eight behind West Brom and Leeds who currently occupy the second of two places that guarantee automatic access to the Premier League.

In an interview with Sky Sports, coach Thomas Frank admitted that catching West Brom will be difficult: “We need to make  perfect games and that will be extremely difficult. The games will come quickly and not just for a week or two, but for five and a half weeks.” Even if they don’t pass West Brom, Brentford will still have the chance to make it through the playoffs, a knockout tournament that decides the third place in the Premier League.

According to the Danish coach, the players are ready for that possibility. “We are doing well and we can’t wait to go there and compete again,” he said, also on Sky Sports. If Frank and his players get that access, Brentford’s transformation will be complete. And watching from their sofas, fans will sing: “There’s only one Matthew Benham.”