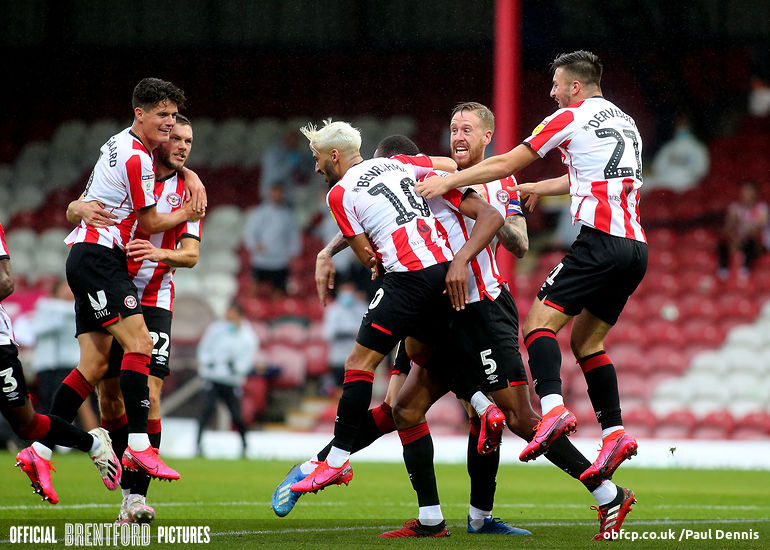 Reporting back to Bees fans, Brentford Deputy Chairman Donald Kerr says beating Charlton after going a goal down is 'a massive win'.
Share |

Four games played since the restart and four games won without conceding a goal, but, in truth, no real pressure on David Raya’s goal in the last two of those matches. One sensed that Charlton would be a different challenge and memories of their dogged defence of the goal that gave them three points at the Valley were soon refreshed by their early goal at Griffin Park. Back then at the start of the season we were frustrated by time wasting that started the minute they scored just before half time, and by what many of us felt was a ref rather too sympathetic to their tough uncompromising style. The only change tonight was that we had longer to repair the damage but they were no less physical and John Brooks was no less indulgent of their approach.

With so many games in such a short time it is inevitable that Thomas Frank has to balance playing his strongest possible selection with ensuring that key players are kept as fresh as possible. The injury to Shandon Baptiste didn’t afford him the opportunity to rest Josh da Silva, but Mathias Jensen started ahead of Emiliano Marcondes in the middle, and Mads Roerslev, having come on late for Henrik Dalsgaard in the previous match, started on the right instead of him tonight.

And, in the eighth minute it was from a lovely deep cross by  Alfie Doughty on our right that the opening goal was scored, Jake Forster-Caskey heading it on to his partner Bonne whose own header evaded David Raya. The move was started by Jonny Williams, who, along with Doughty, was very industrious throughout the first half. Charlton had a couple of chances following that early shock but the first half fairly quickly fell into the Brentford attack against the opposition defence  pattern that we’ve seen since the restart after lockdown. The difference between Charlton and our two most recent opponents was their greater organisation and, some might argue greater luck. Brentford played most of their football in front of the Charlton defence and the few shots we had on goal were long range and frustratingly just too high or narrowly wide.

The start of the second half followed the pattern of the first 45 minutes, with Said Benrahma and Josh da Silva causing the Charlton midfield all sorts of problems going forward and Christian Norgaard, once again, imperious in tidying up behind them and making himself available as a link between them and the back four. Brentford were clearly on top but the scoreboard remained the same. Bryan Mbeumo was being well looked after by the defenders on that side and the central defenders and particularly Lockyer were making life very difficult for Ollie Watkins. Their close marking was thought by those of us there to be rather too close on several occasions but our view was not shared by the man in black.

Then there was a rash of substitutions by both sides, with Charlton I felt being weakened by the departure of Williams and later on by Doughty too, but given their relentless running for the first hour or so, it was inevitable that Lee Bowyer would have to freshen up his midfield. The introduction by Brentford of Henrik and Emiliano made an immediate difference with the former particularly providing much more in attack down the right. Josh da Silva was having a greater influence as the game went on and our only enemy was the clock. There were a number of very close things before the decisive penalty decision in the 75th minute. Said had broken into the penalty area and, although it wasn’t clear to those of us at the ground, texts from friends and family watching on ifollow assured us it was the right decision. After a tense few minutes of arguments and pushing and shoving on the edge of the box, Said stepped up and finally provided Brentford the breakthrough their play had deserved. The following ten minutes produced further heart in mouth moments in the Charlton box, with a measured left footed curler by Josh against the bar perhaps the closest we came to the winner.

Apparently there was some outrage on twitter at Thomas using a white board to help get his point across to the team in the second half drinks break, but together with that message and the inspired introduction of Halil Dervisloglu, he once again demonstrated his own expertise and inestimable contribution to our winning run. Halil was a thorn in Charlton’s side from the minute he arrived, and it was a measure of his approach that he earned the only yellow card of the game from the ever indulgent referee. Finally, on 85 minutes, we broke the deadlock.The goal came after intense pressure from the home side with the Charlton goalkeeper, Philips pulling off one save after another. A shot by Said was pushed to one side for a corner, it was taken short, and then a combination of two of Brentford’s top performers of the evening, Josh da Silva with yet another cross  and Ethan Pinnock’s  header produced the goods.

We only had to endure some further tense but in truth not too tense minutes before celebrating another win and relishing putting even more pressure on those teams above us. This was a massive win. The first time since the restart that we’ve conceded a goal and had to come back from that early setback. It was a colossal team effort, and everyone played their part. All of our games are now being played under extreme pressure, but the experience of Pontus, Christian and Henrik is helping ensure that we stay patient when the chips are down, and that we continue to play our own game. Roll on Derby.