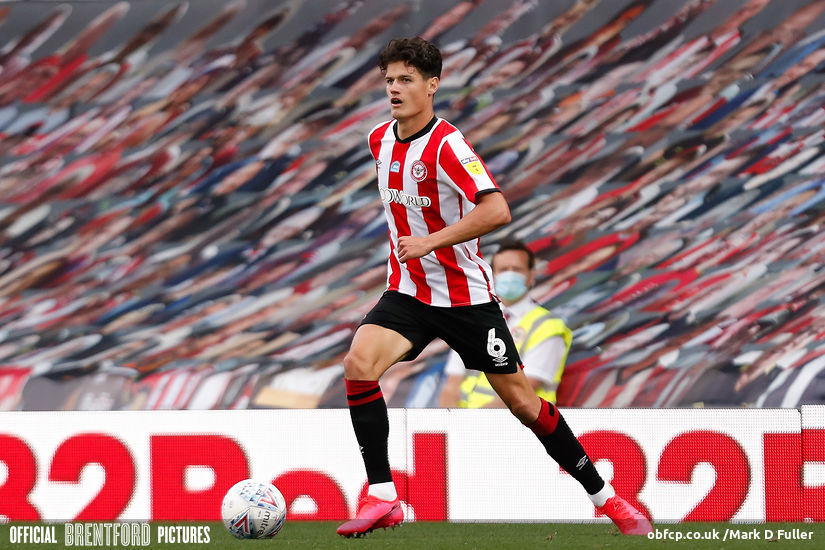 “I can cope with the despair, it’s the hope I can’t stand”. These words, spoken by John Cleese in the film Clockwise, capture rather well the conflicting emotions as we continue to prolong the possibility of automatic promotion. This winning run has some similarities with his journey, as  his character in the film, faced with overwhelming odds, over and over again, and increasingly narrowly,  keeps snatching victory from the jaws of defeat and stays on track.

The game against Preston looked on paper as probably the most difficult hurdle remaining. They had beaten us at Deepdale and their style, similar to that of of Millwall and Cardiff, is one that traditionally has caused us problems. However, the early goal after only four minutes, stemming from a tackle by Ethan Pinnock near our corner flag and a subsequent quick passing movement and a sublime pass from Emiliano Marcondes to Ollie Watkins, looked as if it might calm our nerves. And for much of the first half, Brentford were able to control the match, with only a couple of stray passes out of defence causing any palpitations. Preston are one of those sides that are not too bothered about the possession statistics; they are well organised, they harry the opposition, and when play breaks down, they all get into the final third as quickly as possible. Their hard work and undoubted physicality meant that Rico Henry and Henrik Dalsgaard needed the support of their teammates to nullify the threat, and although the Bees were dominant,  they didn’t make the most of their dominance and only caused Declan Rudd to pull off one save from a Said Benrahma shot in the first 45 minutes. Notable again for us at the game was the commanding voice of Pontus Jansson marshalling the defence and reminding the whole team to keep the pace in our forward play.

From the first minute of the second half we knew we were in for a much harder game, with Alex Neil moving from the rigid five at the back formation and pushing Preston much further up the pitch. In some respects he seemed to allow them to play more football, and they started to pass the ball through the midfield with many fewer long balls above their heads. A free kick from Darnell Fisher, whose main contribution had been to foul Rico throughout the first half without the referee taking any action, was probably Preston’s best chance of the game, drawing a great diving save from David Raya. There was a slight breeze against Preston which meant that Rudd’s kicks were holding up rather than going straight through to David Raya as in the first half. There were more occasions prior to the water break when the nerves of the few spectators were tested and it was no surprise when just before that break, Matthias Jensen was replaced by the fresh legs and bigger physical presence of Josh da Silva. It was unclear from the Braemar Road stand whether Thomas had the white board out during the break .I’m told that on TV it looked more like a white pad, but very little changed in the pattern of the game when play resumed.

As we knew they would, PNE started to ring the changes. Whatever Alex Neil may have said after the game, this was make or break for their season, and he didn’t want to go down without trying different players. So, on 75 minutes, on came Jaydon Stockley, Scott Sinclair and Brad Potts, which, particularly with Stockley, increased the physical threat up front and promised to make life for Pontus, Henrik and Ethan even more uncomfortable. In response, Brentford got slightly smaller with the tiring Bryan Mbeumo replaced by Joel Valencia. Stockley had the immediate predicted impact getting on the end of long balls and more often than ideal seeing the ball bounce off him to a teammate. We started looking anxiously at the clock as our fewer breaks upfield were matched by balls into the box, one in particular causing some alarm and ultimately pain to Emiliano as the clearance smashed into his midriff rather than reaching midfield. Having said all that, Raya was not called into action and most of the trouble was nullified by the defence in front of him.

Alex Neil’s final changes saw Harrop and Bodin on 84 minutes but by that stage we appeared to be coping with the more direct threat of Stockley and having most of the ball, without making the most of the breaks we created. Watkins was pulling their defence all over the area just outside the 18 yard box, demonstrating once again how well he has managed the transformation from winger to fully fledged centre forward, but neither he nor Benrahma could quite turn chances into that crucial second goal. Joel Valencia was busy but was finding it difficult to get into the game, and it was with some surprise we saw the equally slight Jan Zamburek enter the fray for the final 7 minutes. However, he linked up well with those around him and helped Brentford see the game out, with only one or two final flourishes from the opposition. Throughout the game, the quiet competence of Christian Norgaard could easily have been overlooked but he was the constant fulcrum in midfield, a calm and calming influence, constantly moving into space, making himself available and playing the simple ball to a teammate.

And so we still have hope.