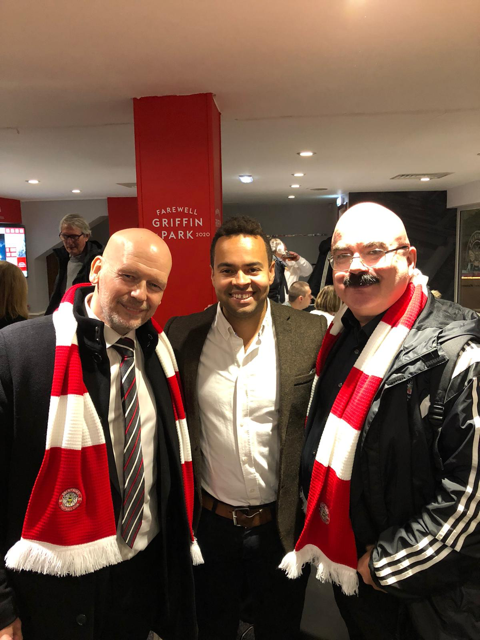 BARNEY’S VISIT TO THE BOARDROOM

Earlier this month Norwegian Bee Bjornar Bruun was the latest member to be Bees United’s guest in the Brentford Boardroom and Directors Box on a home match day.
Share |

Bjornar (left in picture alongside BU host David Anderson and another Scandinavian fan) is known as Bernie to his Brentford friends. During his visit he also met the club chairman Cliff Crown and the CEO Jon Varney.

Bjornar talked to BU Newsletter about his day out:

‘As soon as I arrived and a host hung up my hat and coat I was made very welcome to the Brentford family. Everything was nice, the food, the pint and the friendship. I always feel very welcomed in Brentford, there’s a feeling of togethernes.

‘Like many Norwegians I first got interested in English football because games are shown live on Norwegian TV. My father taught me to be a supporter of England as well as Norway.

‘In 2011 the then Brentford manager Uwe Rosler brought his squad to my local city, Lillestrom, for a summer training camp. Rosler had been player and coach here and was very popular. That is when my special connection with Brentford began.

‘On my trips to England I have been to Premier League clubs but I much prefer coming to Griffin Park. I have been to every home game this season, except Derby and Reading home. I have also been to 3 away games this campaign: Charlton, Nottingham and Middlesbrough. I feel I get closer to the Brentford players than at Premier League clubs. I feel I am part of a great family. People are much friendlier in pubs like the Griffin than they are in Central London. I have got to know many fans  at the Griffin and they often invite me to events.

‘I normally stand in the Ealing Road end so it was quite a change to be able to sit down in the Brentford directors box. I have purchased a life time license at our new home, a premium seat. I am not 20 years anymore, I now prefer to sit down. I am looking forward to the hospitality in the Legends Lounge, where I can sit down, relax and read the match programme.

‘So thank you to all Brentford supporters who welcome me and other members of the Norwegian supporters group. We think Brentford has lots to offer and we hope we can get more of our countrymen and women to join us. At Christmas I will be bringing my wife to see what the fuss is all about’.