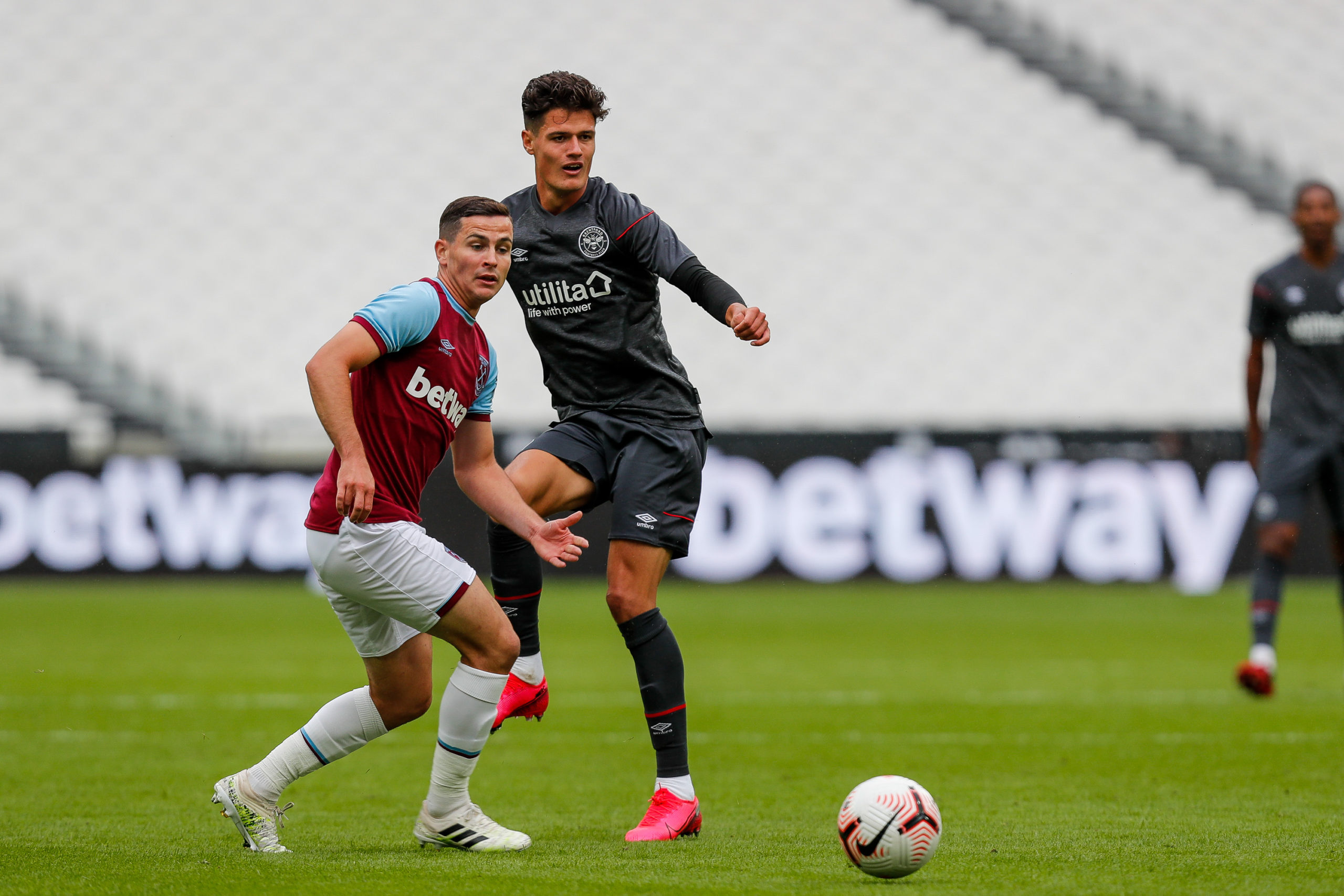 A friendly at West Ham provides more evidence that the Bees are ready for another season battling for promotion to the Premier League. BU Chairman and BFC Director Stewart Purvis was there.
Share |

Two Brentford team coaches parked outside the London Stadium provided some of the few clues that something was going on inside. There were two coaches instead of the traditional one partly because of the social distancing rules inside them but also because Brentford had brought two whole teams -22 players- to the friendly with West Ham.There was no surprise that Watkins and Benrahma were not among the 22 but also absent was David Raya (said to have a slight knock)  and Jeanvier. Baptiste and Gunnarson were getting playing time with the B Team at Swindon.

The Bees are becoming used to playing behind closed doors in vast stadia; from nearly 90,000 empty seats at Wembley to 80,000 at the former Olympic Stadium. The bubbles released before and after every Hammers game drifted across the deserted stands of what was a magnificent athletics stadium in 2012 but has never really worked as a football ground. 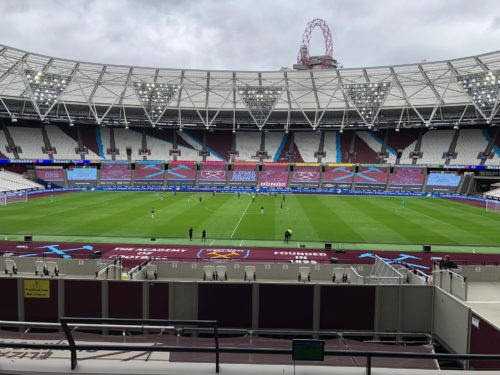 This friendly had a ‘what if we had won at Wembley factor’, a chance to compare ourselves with a squad packed with Premier League experience that we might- just might- have been playing against competitively this season. Judged from the noise coming from the pitch as players shouted for the ball this was a pretty competitive game in itself.

From the very start the comparisons were positive as the Bees, in their new ‘Carbon Grey’ away strip, went close twice in the first few minutes. Sergi Canos, making his first start in 11 months, lost no time making progress down the left before hitting the post. Josh Dasilva shot just wide but then West Ham broke on the right with Yarmolenko getting to the ball before Rico Henry and lifting it -possibly with a touch from Rico- over Luke Daniels into the goal.

The most intriguing battleground became the midfield: for the Hammers Mark Noble and Jack Wilshere, for the Bees Josh Dsilva and Christian Norgaard plus Mathias Jensen. Any impartial judge who didn’t know the players’ pedigree would have assumed it was Brentford who were the Premier outfit. If you were watching the live stream via the club website and didn’t realise that Jack Wilshere played the first half, be assured by an eye-witness that yes he was on the pitch but was completely overshadowed by an ever more confident Dasilva and Norgaard.

Up front with deputy striker Dervisoglu away with the Turkey Under 21s and Peterborough’s Ivan Toney joining on September 1st, this was a chance for striker Marcus Forss returning from a loan spell at Wimbledon and injury. In the first half hour he had very few touches but as Rico Henry made a successful run down the left Marcus was lurking where he lurks best, in the middle of the box. The cross came at him a little stronger than he might have liked but he was able to adjust quickly and angle the header into the net. One-all at half-time.

West Ham made their big switch then, swapping out seven players. Brentford did it on the hour, changing all ten outfield players. Seconds before those planned Bees substitutions West Ham got a second goal when Michail Antonio got past the Bees central defence and set up Soucek.

Brentford had more chances especially for Gustav Mogensen, whose hat-trick in a B team match on Wednesday made him the last Brentford player to score at Griffin Park. The best opportunity came when Joel Valencia put in a great cross from the right but the young Dane headed just wide what could have been the equaliser Brentford deserved. Among the other subs who caught the eye in their debut half hours, Charlie Goode looked comfortable in central defence and further forward Paris Maghoma, signed from Spurs, was fluent and stylish. Of those with a bit more experience, Jan Zamburek, still only 19, is maturing into a powerful mid-fielder.

Afterwards the hospitable West Ham directors were full of praise for this Brentford squad and wished the Bees well in the renewed push for promotion this season. But in truth, the question was not so much whether Brentford would have survived in the Premier League but whether West Ham will.

For Brentford the focus is now the first game in our new stadium.With confirmation that the official safety certificate has been secured the next era in Brentford’s history is ready to start in the coming week.