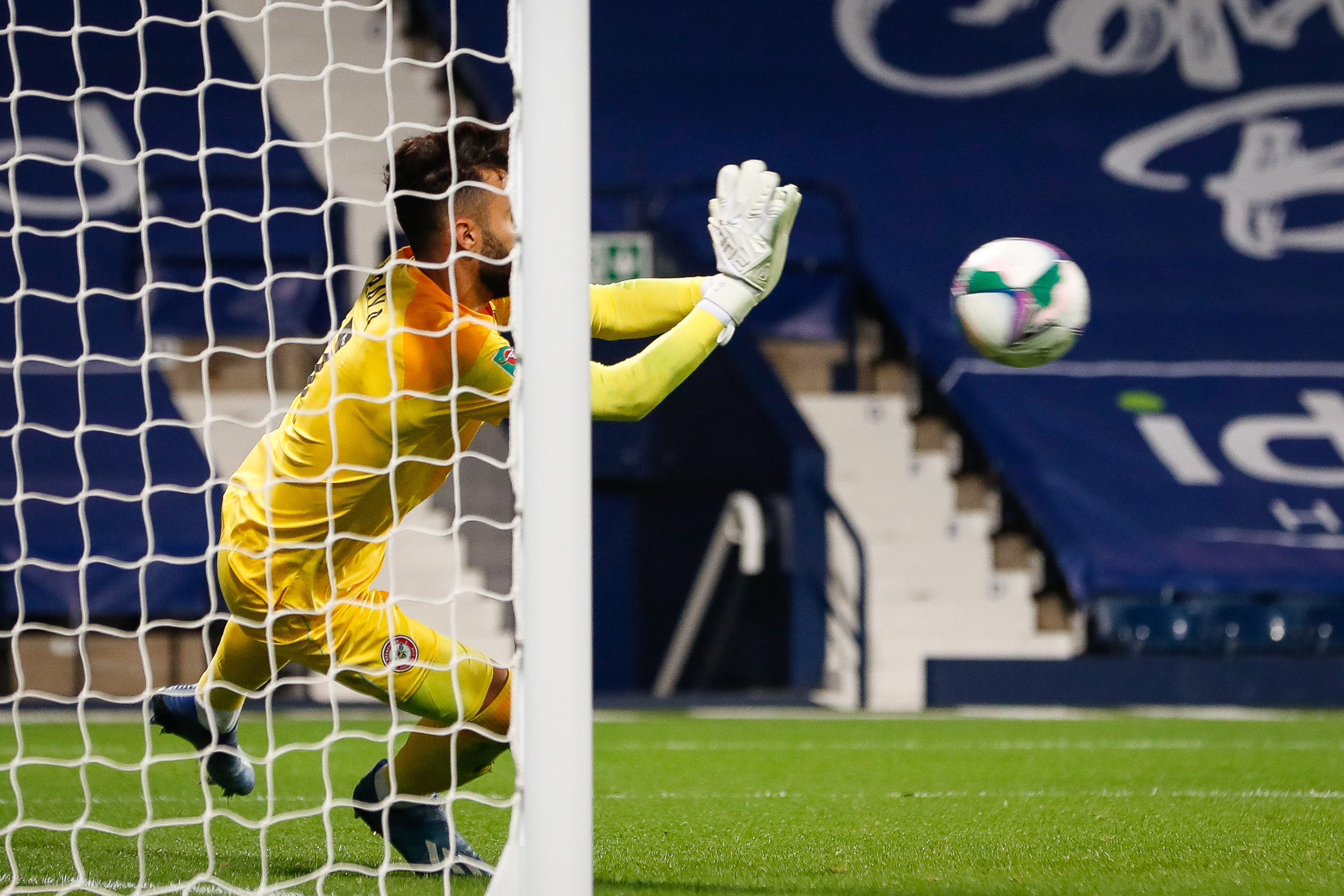 David Raya returns to make the save which claims a second Premier League scalp for the Bees.Stewart Purvis was at the Hawthorns.
Share |

In a game of 13 penalties, 3 within the regulation 90 minutes and 10 in the penalty shoot-out which followed immediately, this Carabao Cup third round game was effectively decided by the first penalty to be missed. With the score in the shootout at 4-4 David Raya, back in his familiar starting berth, faced the highly rated Grady Diangana. A dive to Raya’s right and a firm push were enough to keep the ball out and consolidate his reputation as a shot-stopper. It was a great way to celebrate his 50th game for the club and his captaincy for the night. Of course it still required Brentford to put away their fifth penalty to win the tie. Christian Norgaard stepped up to face David Button, formerly of this parish, and put the Bees through to face Fulham or Sheffield Wednesday next week in the final 16 of the Cup.

With Mads Roerslev out for up to two months with an injury he got playing for Denmark’s Under-21s, Brentford’s only way of resting Henrik Dalsgaard for these Cup games is to switch Rico Henry to right back and play Dominic Thompson on the left. In midfield Thomas Frank rested Josh Dasilva and Christian Norgaard on the bench, starting with Shandon Baptiste, Jan Zamburek and Emiliano Marcondes.

In last season’s Championship games Brentford managed to take 4 of the 6 available points off WBA but somehow couldn’t manage to overtake them into second place. At the Hawthorns last year Brentford were by far the better side but could only draw. In this game the first half was a mirror image, the Bees were better than the Baggies but couldn’t get a lead. In a bright start Rico Henry made a great run, Tariqe Fosu had a chance, Mads Sorensen threatened with his long throws, Sergi Canos fired over and Emiliano Marcondes hit the post. Charlie Goode put over a great long diagonal pass which the Bees officials in the stand christened ‘Barbet-esque’.

In the second half a ten minute spell produced four goals, no fewer than three of them penalties. First up Robson-Kanu got away from Sorensen and was brought down by Dominic Thompson. Robson-Kanu took the penalty himself, rolling it gently down the middle as Raya took off in mid-air to his left. From the kick-off play soon moved to the other end where Sorensen was now forward on the left. He crossed a long ball and Goode, utilising the Ethan Pinnock technique of heading it back into the box, set it up for Marcondes, back to goal, to perform a perfect overhead kick straight past Button. It was the goal of the night, in fact it was the only goal of the night in open play. Now Albion attacked and when Goode bundled over Edwards, it was another penalty chance for Robson-Kanu. Another roll down the middle, another Raya dive to the left. The score, at 2-1 to WBA, didn’t reflect the overall balance of play and Thomas Frank decided the game was still there to be won.

He brought on his top midfield duo, Josh Dasilva and Christian Norgaard, and immediately the Dane was everywhere, breaking up WBA play but it was Dasilva who started the move that led to an equaliser. Ivan Toney, who’d also been brought on as a sub to play alongside Marcus Forss, fed it to his strike partner and Albion defender Cedric Kipre brought him down. Forss took the penalty himself but none of this gently rolling stuff from Marcus, he thundered it straight into the net past Button. At the other end Raya made a great save to keep the score at 2-2 and take the game to penalties. When his turn came Forss again unleashed a thunderbolt and Toney, Dasilva and Fosu all took their penalties well before Norgaard clinched it.

In two Carabao Cup away games, a less than full strength Bees team have faced a Southampton side of Premier League starters and an Albion side of squad players and been the better team on both occasions. Who says they can’t make it a hat trick against Fulham if that’s who’s next in the fourth round, the first time Brentford have got this far for a decade.

At the end of this game the celebrations were modest and Thomas Frank went over to talk with unused WBA sub Romaine Sawyers, the captain he admired so much at Griffin Park. All very Brentford.