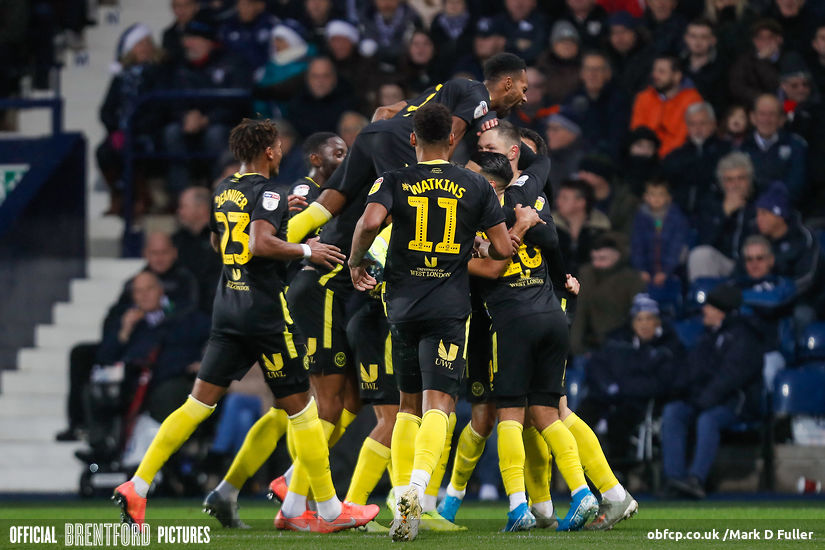 Stewart Purvis saw Brentford confirm their rightful place in the top six by out-performing the Championship leaders. Was there ever before a Brentford draw that produced such rightful rhapsody with much of the praise coming from fans of the opposing side.
Share |

‘Brentford by far the best we’ve played’ , ‘definitely the most accomplished side we have seen this season’, ‘the best side I’ve seen down our place’, the compliments kept on flowing from fans of table-topping West Bromwich Albion, relieved to have got a point out of a game which Brentford dominated for the majority of the 90 minutes.

How many Bees fans could have predicted this outcome when the team sheet was released before the game and the glaring absence of Pontus Jansson created fears of a rerun of the Sheffield Wednesday game, when a hip injury to Brentford’s captain was widely credited with our defeat. Well that hip injury hasn’t gone away and Thomas Frank is having to ration how many times Pontus can play in the busy holiday period. The difference from the defeat at Hillsbrough was that this time Henrik Dalsgaard wasn’t injured too, he stood in as captain and played a crucial role. In the warm-up there was one person we might not have expected, goalkeeper coach Inaki Cana Pavon, widely credited  with coaching David Raya to even better performances and now widely rumoured to be joining fellow Spaniard Mikel Arteta in his new Arsenal coaching line-up. Maybe the deal isn’t done yet.

And how many Bees fans would have forecast that Brentford would start where they left off with Fulham at Griffin Park a week ago, flooding forward, testing the opposing defence from all angles.With only two minutes on the clock, Rico Henry, Josh Dasilva, Ollie Watkins and Said Benrahma were all involved in the build to Bryan Mbeumo having the chance to cut inside from the right but his shot was not strong enough to beat Sam Johnstone. A couple of minutes later Benrahma had his own chance but Johnstone turned it away. It was definitely getting to be a lot like Fulham as chances weren’t turned into goals, first Watkins from 25 yards then Christian Norgaard curled his shot just wide of the right hand post. Norgaard and colleagues Dsilva and Mathias Jensen were comfortably running the midfield, playing such wonderful football that the 1,465 supporters in the away end were singing ‘We’re just a bus stop in Hounslow’. This was lost in translation to those Brummies and Baggies who already struggle to know where Brentford is. How else to explain the silence from the 23,000 Baggies fans at Brentford’s superiority?
Suddenly there was a threat that Albion might ruin the party. Kyle Edwards got behind the Bees defence but Raya timed his intervention perfectly diving in at Edwards’s feet and grabbing the ball.

Brentford players celebrate Henrik Dalsgaard’s goal
In the final few minutes of the half came three key moments. First Jensen put over a corner from the left and captain Dalsgaard rose near the front post and headed the ball into the far corner. The goal was absolutely what Brentford deserved and with just a few minutes of the half to see out Brentford attacked again, this time down the right. Jensen crossed towards Watkins  in the box and defender Kyle Bartley inexplicably put out his left arm. Even more inexplicably the assistant referee staring right at him failed to notice the handball. It should have been a penalty – some Bees fans thought there’d been an earlier and very similar mistake too- so it should have been at least 0-2.  Instead  Albion cleared the ball to the other end where Norgaard allowed it to run out for a corner rather than hoofing it upfield. The home side had clearly been so impressed by our goal that they scored exactly the same kind. A corner, admittedly from the right rather than the left, met by a player who ran across the box and glanced it over the defence into the net. Darnell Furlong scored the goal, Julian Jeanvier had been marking the space not the man.
Crestfallen doesn’t quite sum it up. Brentford had played one of the best halves of away football anybody could remember and somehow gone into the break with no lead to show for it and the likelihood that when they returned Albion could only get better. So it turned out as for fifteen minutes the balance of power changed, lots of WBA corners but fortunately not too many clear cut chances. Romaine Sawyers playing slightly deeper for WBA than he did at Brentford came over to Slaven Bilic for the same kind of tactical chats he used to have with Dean Smith and Thomas Frank. On 60 minutes the Bees started to get back into the game with Benrahma testing Johnstone again and with the away end in full voice about Hounslow bus stops and anything else that took their fancy the Bees were in with as good a chance of winning it in the final quarter as Albion who’d brought on Charlie Austin, their hero sub in recent games. It was Austin who smashed the ball into the net after Matheus Pereira’s shot at Raya bounced out to the sub. For one nano second it seemed that a great injustice had been committed but the wrong was put right when Austin was  judged offside. The final few chances fell to Brentford from free kicks on the edge of the box but nothing came of them.
Man of the match Henrik Dalsgaard was disappointed Brentford hadn’t got the full three points and couldn’t stop wondering what might have been if the chances had been taken in the first half and the penalty had been given. The solution he said was to ‘keep working our bollocks off’ . Head bollock-worker-off Thomas Frank was also upset about the penalty that wasn’t given. The defence had done well in the absence of Pontus but the Swedish centre-back would return on Boxing Day. A bonus had been the return of Joel Valencia up front for a few minutes at the end.
After the game there was a quintessentially Brentford moment. Romaine Sawyers greeted his former coach and colleagues with warm embraces. The warmest of them all was reserved for the last man in the queue, Brentford kitman Bob Oteng. On a day of great football and passionate fans It was another reason to be proud of our club.