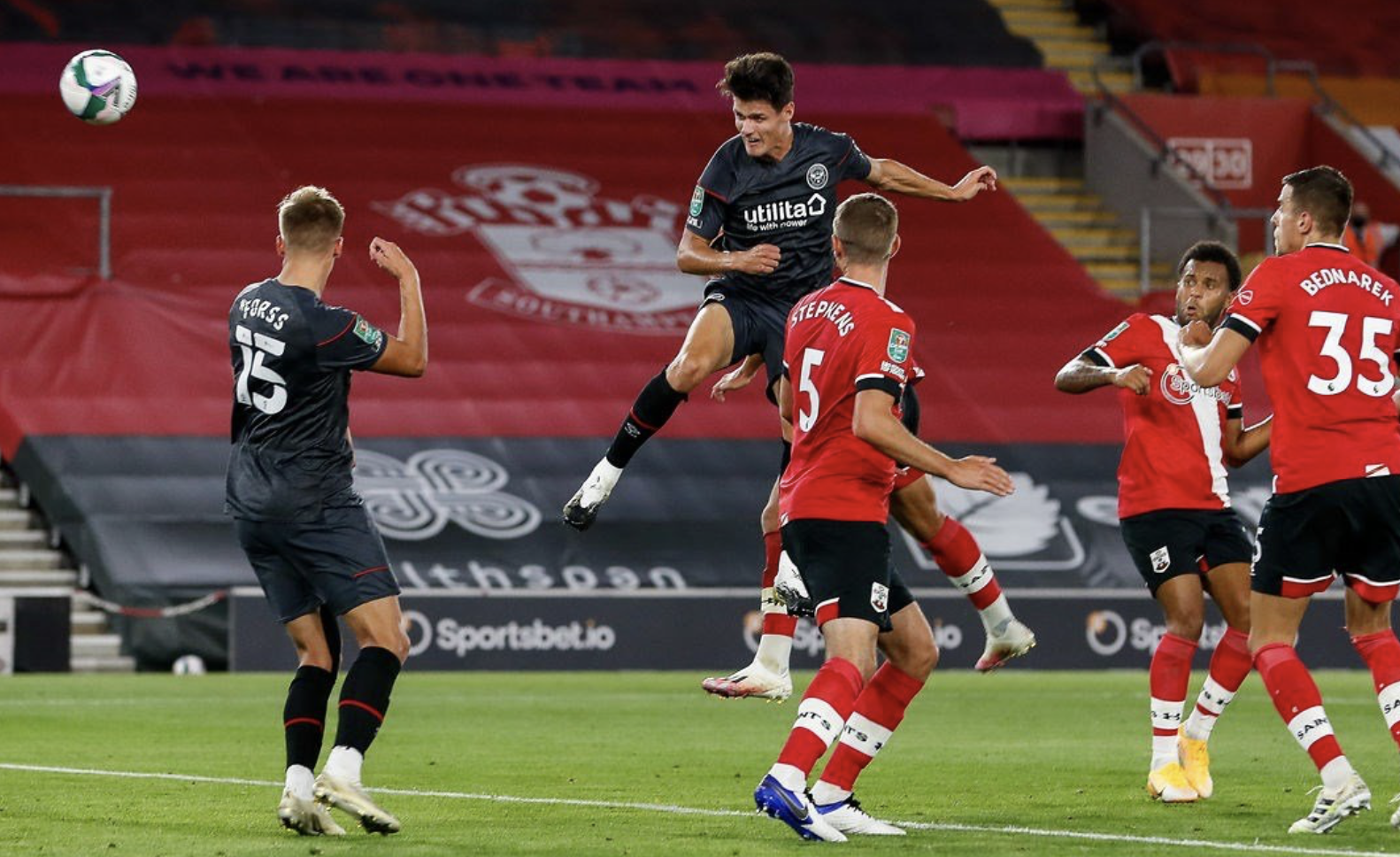 Two great goals and an impressive all round performance took the Bees to what became a comparatively easy Carabao Cup second round win over a full strength Premier League team playing at home. Southampton had made only one change from the team that played Crystal Palace on Saturday. The Bees fielded a customary Carabao Cup mix of Championship starters and squad players. But on the bench their choice was limited to just 5 possible subs rather than the usual 7   because a positive COVID test on a player in the B team match earlier this week meant that those involved in that game were self-isolating.

Of those starting for the two sides, the biggest contrast was Danny Ings and Che Adams, two Premier League strikers, up against Mads Bech Sorensen and Charlie Goode, who last season were two League One centre backs.

It was Brentford who started brightest with Mads releasing no fewer than three long throws that troubled the Saints defence. Their goalkeeper Alex McCarthy was involved in a series of scrapes, crashing into Tariqe Fosu and getting a booking, relying on a defender to clear off the line from Bryan Mbeumo, missing a corner but saving from Tariqe and Bryan again. Saints best chance came when they hit the post and Luke Daniels grabbed the rebound. Had that gone in this could have become a very different game, but as it was Brentford responded with two goals before half-time.

The first came from a corner taken by Mbeumo. As it came over from the left the figure of Christian Norgaard could be seen flying through the air, rather like Peter Pan on a wire in a pantomime, and completely unmarked. He met the cross perfectly and it crashed into the net for his first goal for Brentford in a competitive game.The second also came from the left when Fosu turned inside and slipped the ball forward to Shandon Baptiste. Rather than pass to Marcus Forss in the box he crossed it deeper to Josh Dasilva who was all set up to direct it powerfully past McCarthy.

Southampton Head Coach Ralph Hasenhüttl went down the tunnel at half time in a right strop and his mood wasn’t much better at the start of the start of the second half when Daniels saved a header that was looping in, Goode stopped Ings scoring and Ward-Prowse put one over the bar. In comparison Thomas Frank was the calmest man in this particular house, the 32,000 St Mary’s Stadium which one member of the Brentford delegation thought was the quietest venue we’d played at behind closed doors. The Southampton officials were noticeably silent as their team made few inroads against their lower division visitors.

Brentford held their shape very well and relied on counter-attacks. But they were also confident enough not to retreat too far into defence, Thomas Frank could be heard shouting ‘Stay High’. Goode and Sorensen never looked out-classed, Charlie showed his power in the air, but there’s work to be done on his distribution. Baptiste looked a good and more muscular replacement for Mathias Jensen and Marcus Forss ran for 77 minutes but for me the best player on the pitch was Bryan Mbeumo, likely to be the only survivor of last year’s BMW attack. We’ve grown used to him either fading or being substituted in the final quarter, a touch of COVID in the run-in was possibly a factor, but in this game he was at full power in attack and defence for the full 90 minutes.

After the game Thomas Frank talked of Brentford’s ‘tactical flexibility’, explaining that knowing of the Saints’s preference for pressing he had switched to a longer ball policy and it had paid off with both goals originating from those tactics.

One of the Brentford delegation wondered afterwards ‘when did Brentford last win two League Cup games in succession?’. ‘When we were last in the third round’ came the answer. WBA away are up next .Then came the news that owner Matthew Benham’s other team, Danish side FC Midtjylland, had won  as well, in the qualifying third round of the Champions League. That means they have a place at the very least in the Europa League and one more win will take them into the Champions League. Not a bad night’s work for Matthew’s men.