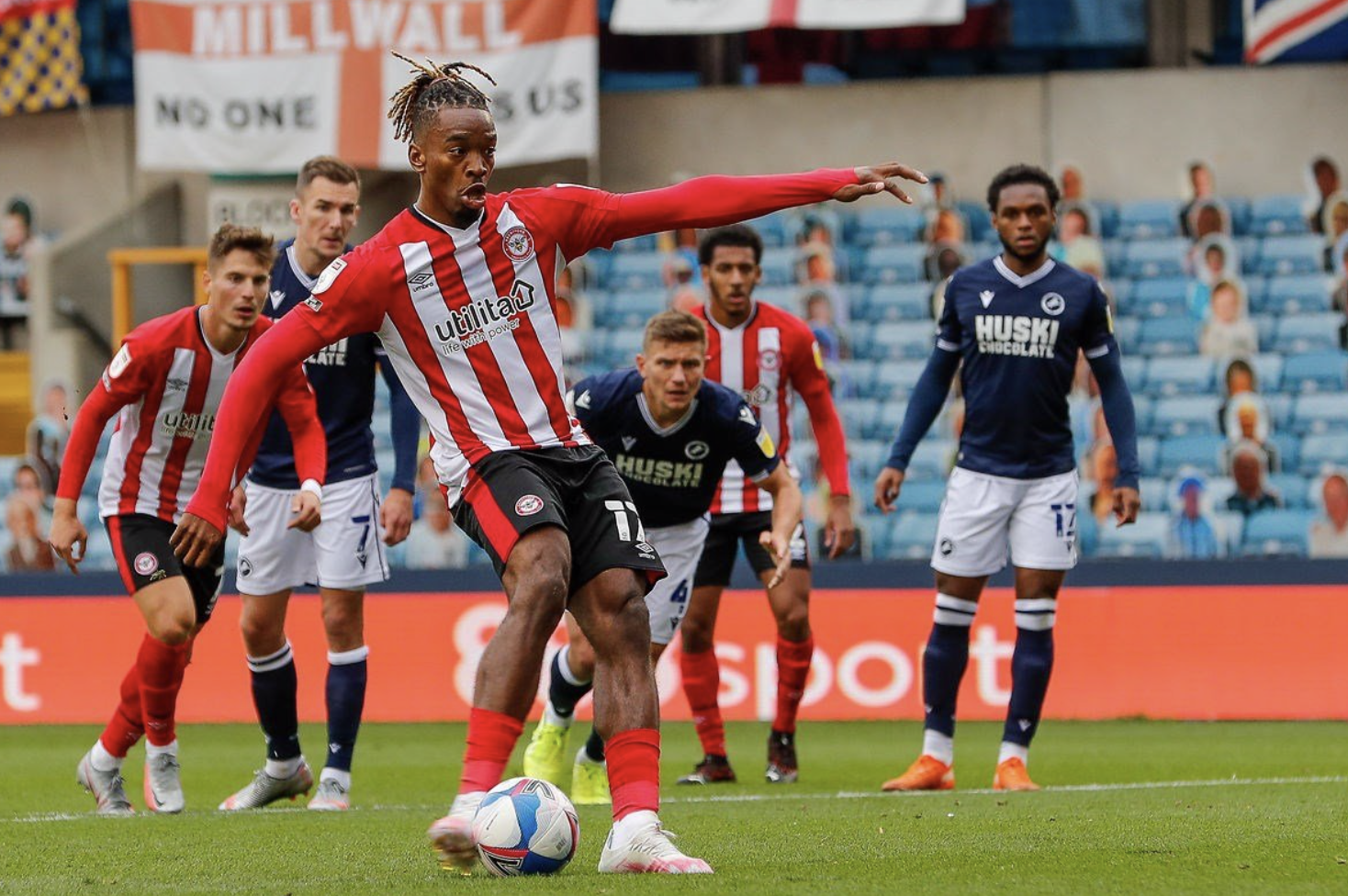 Ivan Toney gets his first goal for the Bees as they come away with a point from The Den.
Share |

As a cold wind blew around the empty Cold Blow Lane Stand- normally the home of Millwall’s noisiest fans- the Bees recovered from a bad start to earn the kind of away draw that we used to let slip. As soon as the game started it seemed that Rico Henry had an injury problem and after only three minutes he went to ground, was taken off and Dominic Thompson came on at left back. With second choice right back Mads Roerslev already out for a couple of months the worry must be that Brentford will be down to just two specialist full backs  -Dalsgaard and Thompson- for the busy schedule of league and cup games ahead.Thompson went on to pick up Brentford’s only yellow card  as he faced a challenging afternoon against Millwall wing back Mahlon Romeo.

As the Bees were reorganising their shape and before Thompson had even touched the ball Millwall’s Mason Bennett (one of the infamous Derby duo in that 2019 car crash) led their press, targeting Pontus Jansson. Bennett came away the winner down the left with Pontus in his wake and Pontus’s right red boot in mid air as the centre back scrambled to recover. Bennett’s cross found Jed Wallace who headed past Luke Daniels. As the ball went into the net Pontus’s red boot lay lonely on the edge of the box, he would later switch to a pair of black boots.

Ivan Toney was determined to score his first goal for the Bees and get his new club back into the game. After 8 minutes he shot wide and on 20  minutes he looked certain to score when a cross came over from Henrik Dalsgaard but Shaun Hutchinson pushed him over. Toney took the penalty and considering the pressure on him was remarkably calm as he rolled the ball past Bialkowski.The only other noticeable chance in the first half was when Romeo (son of the music producer Jazzie B of Soul II Soul) let fly from outside the box and hit the post. At the other end Bryan Mbeumo led a breakaway but to the annoyance of two spare colleagues in good positions he trusted his left foot from far out and for once it let him down.

In the first few minutes of the second half the Bees came close to what would have been a match-winner. A nice dummy by Toney set up Sergi Canos and his cross looked to be heading for a Josh Dasilva tap-in but Malone got there first to clear it.Then Daniels avoided Millwall getting a match-winner by tipping over another shot from Romeo. On 73 minutes Said Benrahma came on for the first time this season, as a sub for Canos, and he put over a good cross that could have led to a goal.

After the game Ivan Toney said ‘Listen, If you can’t win, don’t lose and we did that today’. He thought the Bees had the better chances and could have stolen it at the end. He had shown more of the range of skills that first attracted Brentford to him; strong running for 90 minutes, some deft touches and lay-offs, a powerful defensive header. Thomas Frank said Ivan was growing game by game and what he liked was Toney’s  physical output, his constant pressing, his link-up play and his movement.

In defence credit again to Ethan Pinnock, unbeatable in the air and the saviour of the day with more than one clearing header. Other good news; Christian Norgaard put in his usual good performance without getting his usual yellow card.

Now Fulham at home in the Carabao Cup.