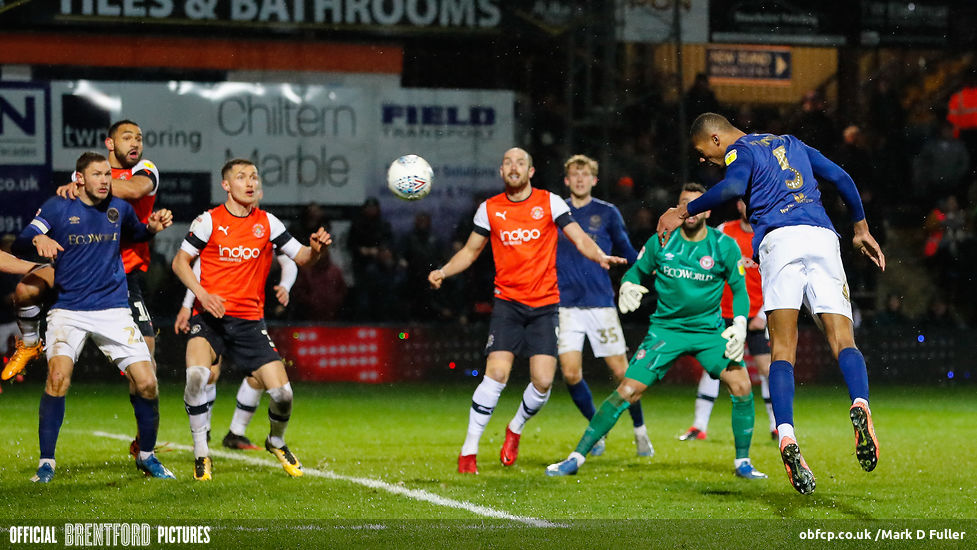 For the second time in four days Brentford failed to win after having the best of the first fifteen minutes then going two goals behind by half time. Instead of taking six points in two battles for promotion they came away with just one, with no wins in four games and no clean sheets in eight league and cup games. Fortunately their rivals for the playoff places seem to be going through similarly bad patches.

For the first few minutes Brentford were making all the chances, Rico Henry nearly got his head to a Bryan Mbeumo cross. But in the ninth minute a Luton free kick from the right spun and bounced into the box where Shandon Baptiste stuck out a leg and put it past David Raya. This goal against the run of play ignited the Luton crowd and charged up their players, for most of the rest of the ninety minutes the Hatters were more determined and more forceful than their Brentford counterparts amid the often gusty conditions. It felt like that 7-0 thrashing at Griffin Park still hurt.

As the Bees struggled to get back into the game a problem with their line-up became increasingly apparent. ‘Franking sense’ ran the electronic advert round Kenilworth Road promoting a ‘mail technology’ company. As it turned out Thomas Frank had made a selection decision that didn’t make enough sense for him to stick with it for more than a quarter of the game. In place of the injured centre back Julian Jeanvier the Brentford Head coach had moved midfielder Christian Norgaard to the middle of a back three with Pinnock and Dalsgaard either side of him. It was a decision that got fans asking why if a centre back was needed Luka Racic wasn’t given the slot.

The Norgaard problem was that he clearly wasn’t very comfortable in the role, mistiming one tackle so badly he earned a yellow card that could have been a red. And not having him in midfield meant the Bees were without a central playmaker. Increasingly he was released forward, sadly to no great effect, as Brentford reformed into a 4-3-4 formation. There were chances; Said Benrahma had the best, Josh Da Silva had the most, Bryan Mbeumo had nothing much at all.

Then, just as with Blackburn on Saturday, momentum turned into a further setback and David Raya was at the centre of it. From a Luton free kick on the right he rushed out to try to punch the ball clear but it fell to Martin Cranie, 33 and still going strong, who volleyed it into the net. Raya claimed he’d been barged in the air and as the players went off at half time moment later Brentford assistant head coach Brian Riemer carried on the argument with referee Darren England.

Within a few minutes of the second half Norgaard fell awkwardly and looked in pain. He carried on and by the 60 minute mark he’d helped Brentford get their shape back .But the struggle was too much and he was replaced by Emiliano Marcondes, the Brentford fans packed into the away end going him a sympathetic round of applause sensing it wasn’t his fault he’d started out of position. Tariqe Fosu got a chance in place of Mbeumo and so did Joel Valencia instead of Baptiste as Thomas Frank pushed for the kind of comeback from two-nil down that had brought victory at home to Millwall. Bees got one back thanks to an assist from Mads Roerslev who had another outstanding game after an impressive substitute performance against Blackburn. Ollie Watkins put him away on the right and he crossed back to Watkins who tucked it away for his 22nd of the season. Celebrations were limited as Brentford pressed for an equaliser and in the final minutes there were two more chances: Benrahma, who’d shown admirable concentration and control in difficult circumstances, curled a shot just wide then Ethan Pinnock, taking his customary corner position beyond the far post, headed the ball into a bunch of Luton bodies. Yes Bees could have got a point but when when you keep giving opponents a two goal start your luck is going to run out sometime.