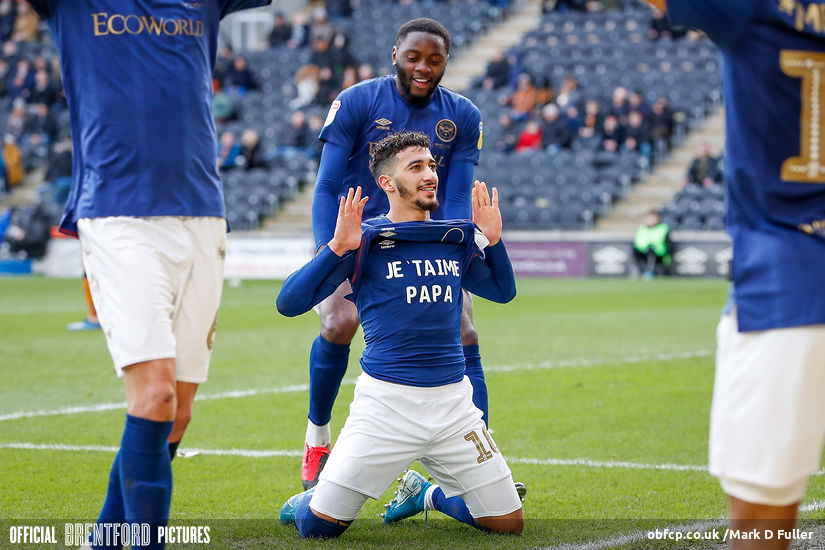 Stewart Purvis was at the KCOM stadium to see Said Benrahma score an emotional hat-trick.
Share |
After three league and cup games without scoring one goal, Brentford scored five, and it could have been a lot more, against a lacklustre Hull team missing their two best players who’d been sold the previous day.

For the survivors of previous trips to Hull when players and fans alike froze (one fan told me he’d never been so cold) the weather and the game seemed remarkably benign. Jarrod Bowen and Kamil Grosicki who had both caused us trouble in the past were Deadline Day departures. By contrast Brentford emerged from the transfer window unscathed with Said Benrahma and Ollie Watkins still in harness alongside Bryan Mbeumo and Pontus Jansson missing only because of an annoying hip injury.

This was to be Said Benrahma’s day. 83% of the Man of the Match votes went to the Algerian. Deeply frustrated by the draw at Huddersfield and then – in the wake of his father’s death- his failure to score a tribute goal against Nottingham Forest, it took only 12 minutes for him to score at Hull. From a set piece corner routine with Mathias Jensen he cut across the goalmouth and found the sweet spot to the left of keeper George Long. Said went straight to a Sky camera and unveiled an undershirt with the slogan ‘Je t’aime Papa’ (I love you Papa). Team-mates surrounded him in support, the referee tried to make the inevitable booking as low key as possible.

There then followed a bizarre 25 minutes when first one side scored an unusual own goal and then the other responded with an even more surprising one. It was Benrahma-who else- who started it rolling with a teasing cross from the right which Watkins got his head to sending it towards goal. Hull defender Reece Burke, who had done well to clear an earlier chance from Watkins, somehow managed to head it backwards and into his goal.

Then from the halfway line Burke’s fellow centre-back Ryan Tafazolli completely mis-hit a pass sending it unthreateningly to Brentford keeper David Raya. Of course Raya has a mostly unblemished reputation as a keeper with good feet, the only exception being at Millwall. From the main stand you could hear a cry of exasperation from Tafazolli at his mistake, he turned away in disgust with himself, and looked back at Raya just in time to see him somehow mis-kick so badly that he sent it into his own goal. He rushed back after the ball but it was too late. With full Sky Sports multi-camera coverage capturing every second he committed to video one of the all time great goal keeping bloopers. Said Benrahma ran back to console him on his achievement.

The Hull crowd, short of anything much else to celebrate,  now enjoyed a prolonged period baiting Raya and shouting ‘shoot’ whenever Tafazolli had the ball. Upfront for Brentford Ollie Watkins was battling hard and once when through was pulled back, an offence which somehow did not merit a yellow card. Captain Henrik Dalsgaard was on duty in the referee’s ear in the absence of Pontus Jansson.

The freak goal had given City hope and they started the second half brighter. But then Brentford scored a cracker, just two passes from box to box, the first from Ethan Pinnock over the top to Rico Henry down the left, the second from Rico to Ollie Watkins’s head in plum position to head it past Long.

At 3-1 the game was over but the scoring wasn’t and at the away end the Bees fans were having a grand day out in East Yorkshire enjoying the entertainment right in front of them. Mbeumo made a run down the right and squared it for Benrahma to get his second. Then as the fans shouted ‘We Want Five’ they got it. Jensen,who was running the midfield immaculately with Danish colleague Christian Norgaard, started a move which ended with Benrahma smashing the ball home for his hat-trick. This time he didn’t run to a camera but to Thomas Frank and they embraced with genuine warmth.

The Hull crowd resumed their warfare with their owner by chanting ‘Allam Out’ at businessman Assem Allam. The Bees fans sang ‘There’s only one Matthew Benham’ perhaps recognising that their owner had lived up to his promise of not selling  Brentford’s best players if we were in the playoff zone during the January window.

Afterwards Norgaard said the result may have been a top one but the performance was not because he thought they should have been more ruthless in both halves. He was right but after all those long unsuccessful trips to the far corner of Yorkshire the fans were happy to settle for five-one.

At the end their hero Said Benrahma wiping the tears from his eyes with one arm and holding the matchball with the other,his ‘Je t’aime Papa’ shirt proudly on display, lead off his teammates after a very emotional day.