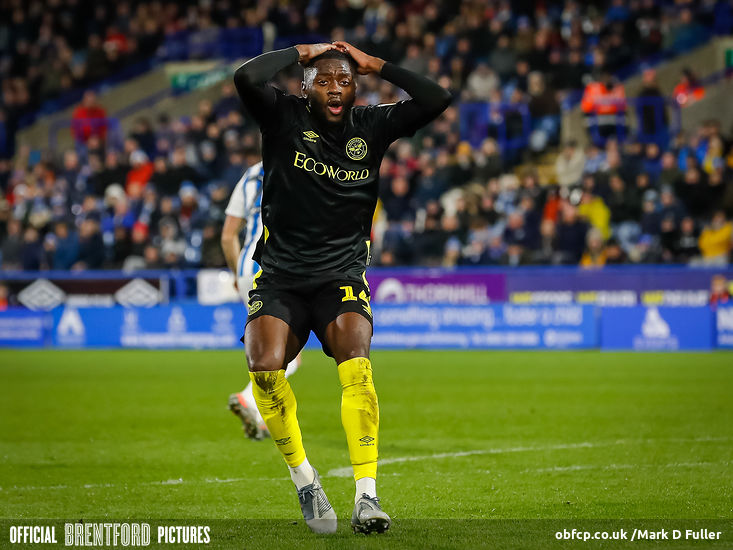 Stewart Purvis was among the Bees fans in the John Smith's Stadium who saw a special chance slip away.
Share |

‘When none of the the front three are really, really on it then you need something special’. Just how special would it have been for Thomas Frank in the 87th minute at Huddersfield if Josh Dasilva -with the BMW ahead of him misfiring – had scored rather than hit the post. It would have put the Bees just three points behind Leeds who had imploded again, this time at QPR. Instead Frank was left to reflect on what might have been. Beforehand he had talked of the ‘big statement’ a victory would make. Afterwards he called the draw ‘an average performance’.

There is another way of looking back at this game: Brentford started without their best defender Pontus Jansson (his hip again) and set piece expert Mathias Jensen ( a hamstring injured in training) but still kept another clean sheet away against a team, newly reinforced during the transfer window, which had only lost two of its home games since September and had defeated us at Griffin Park. Plus the Bees did trim the Leeds lead by a point. Assuming Jansson and Jensen don’t return for the cup game at Leicester they will have had two and a half weeks off without a game by the time they return for the important home fixture against Nottingham Forest on January 28th. Let’s hope time heals well.

The Brentford delegation had been welcomed to the John Smith’s Stadium by former CEO Mark Devlin, appointed to the top executive post at Huddersfield this past week. Over 500 Bees fans had travelled from West London to West Yorkshire but for the first 20 minutes neither they or Mark’s new employers had much to get excited about. Then Said Benrahma, regularly moving in from the left to take up a central striking position, got his first shot on target. Ollie Watkins had a shot deflected away for a corner by Josh Dasilva, one of a series of disappointing set pieces where Jensen was missed.There were to be more chances for the Bees in open play: a Benrahma shot blocked, a Mbeumo one scuffed, and in the 40 minute the first full blooded save, again from Benrahma. By contrast Huddersfield’s only chance of the whole half came in the very last minute when Trevoh Chalobah headed a corner onto the roof of the net.

Overall Brentford had dominated but regular readers will know by now what tends to happen once play restarts. The pendulum swung  with the opposition showing more aggression and chances. Both defences had looked capable of making mistakes and it was Julian Jeanvier who made the first.  Emile Smith Rowe, in his first game on loan at Town from Arsenal (remember him from our League Cup game at the Emirates) got round the defence and crossed. Jeanvier should have cleared the ball but instead let it run across him to Karlan Grant, who’d won the game at Griffin Park with a stunning shot. Grant was so close it seemed inevitable he would score another goal that would scuttle the Bees. Fortunately he dispatched it over the bar.

For half an hour Huddersfield then had by far the better of the game, Brentford’s first touch had deserted them, Watkins was being beaten to the ball by Christopher Schindler, Bryan Mbeumo was looking unusually under par and Said Benrahma was getting frustrated. But fortunately Brentford had five men further back that they know they can count on to defend in these difficult circumstances: Henrik Dalsgaard, Rico Henry, Ethan Pinnock, Christian Norgaard and David Raya. With ten minutes to go it seemed Brentford had weathered the worst and had an equal to better chance of grabbing a winner. The crowd roared on their ‘blue and white army’ but it was the black and yellow Bees now on top. In the technical areas the fourth official was struggling to control not just one Cowley brother but both of them as they got increasingly stressed at Brentford’s returning threat. Now it was their defence’s turn to give away possession, Watkins got the ball and passed to Valencia – on for Mbeumo- but the Ecuadorian couldn’t conjure anything out of the chance.
Then sub Emiliano Marcondes started a move with Benrahma that gave Dasilva a sight of goal. He arched his body in the classic Dasilva way that means he’s about to curve the ball into the net only to watch with anguish as it hit the post and bounced clear. Brentford became reconciled to a single point that on normal days they would have counted as a result on a visit up north on a cold day. But at the end of this one the shared body language of Thomas Frank and captain for the day Henrik Dalsgaard told you that wasn’t how they will remember it.