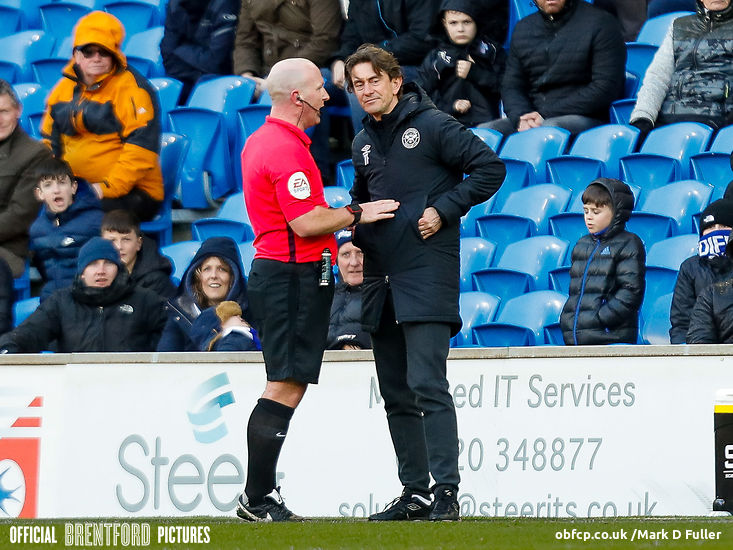 After two games where Brentford tried to recover from a two-goal deficit, this time it was the Bees who went two-nil up and blew three points. But the Championship being the extraordinary league that it is we’ve now gone five games without a win yet only dropped from fourth to fifth in the play-off places. Even the most optimistic Bees fans would accept that this winless run can’t go on much longer without us slipping out of the top six.
Brentford had been blown off course at Luton on Tuesday and early Bees arrivals at the Cardiff City Stadium found a fierce wind again threatening to disrupt our style of play. By the time of kickoff the wind had dropped but there were occasional gusts of wind and rain between the sunshine.
Thomas Frank, who’d decided against giving Luka Racic a chance at Luton in place of the injured Julian Jeanvier, now started with him in the centre two of a back four. Within five minutes the young Dane had got his first Brentford goal to put the Bees ahead.
After all those complaints from Bees fans about the quality of the corners at Luton Emiliano Marcondes got the ball past the first man to reach Henrik Dalsgaard and it then fell to Racic who dispatched it into the corner of the Cardiff net.
Sixteen minutes later Marcondes won a free kick right in front of the box and Bryan Mbeumo put it away with a superb strike that left Cardiff keeper Alex Smithies floundering.Twenty minutes gone, two set pieces, two goals.
But Brentford’s winning rhythm was soon disrupted by a lengthy row.
Christian Nørgaard tackled Will Vaulks on the sideline right in front of the dugouts. Those Bees fans in seats a few rows behind the dugouts thought it a perfectly fair tackle. What they judged was not fair was Vaulks’s response which was to move in on Nørgaard as he lay on the ground. Thomas Frank who was even closer thought Vaulks’s knee had made contact with Norgaard’s head .To put it bluntly he lost it, first with Vaulks, then with the Cardiff coaches crowding round him, then with fourth official Matthew Donohue who appeared to have advised referee Simon Hooper that no action need be taken against Vaulks other than a chat. There now seemed a danger that it might be Frank not Vaulks who would be sent off but the Brentford Head Coach and the ref settled it face to face, man to man. Afterwards Frank said it was ‘a clear,clear red card right in front of the fourth official’.
By a further twist it was Vaulks and his long throws who led the Cardiff fight back. Although Vaulks played only a minor part in their first goal, an Albert Adomah cross headed in by Junior Hoilett, his next long throw created the equaliser just before half-time when Captain Sean Morrison headed it on and Joe Ralls beat Raya. On both occasions Cardiff players had beaten Brentford ones to the ball in the air.
It was an irritable way to go into the half-time break and the omens were not good. As it turned out the Bees came out looking stronger. Overall they had nearly double the possession and more than double the corners. They had lots of shots straight at the keeper and the game then turned on two key misses. Brentford’s came when Ollie Watkins failed to convert a cross from Rico Henry. Cardiff’s fluffed conversion was by Joe Bennett, distracted by Raya from putting home a cross from Adomah.
Mr Hooper then made a whole series of decisions in the penalty boxes which annoyed Cardiff fans most. He angered them further when Josh DaSilva played a one-two with him and with Benrahma but nice move though it was Josh blasted it wide. In the final minutes there were chances for Dalsgaard and Mbeumo but keeper Smithies wasn’t really troubled by them. At the other end David Raya limped off after the truly stormy match into the arms of goalkeeping coach Andy Quy.
It shouldn’t be a surprise that a team coached by Neil Harris, successor to Neil Warnock, committed 14 fouls to Brentford’s 6 and earned 4 yellow cards against 1 for the Bees. Brentford proudly put brain before brawn in midfield and and supplement it with some elegantly timed tackles and energetic tackling back. But how the Bees could do with the man we hoped Dru Yearwood would and still might be, breaking up opponents’ attacks and launching our own. Shandon Baptiste, who also just might be that man, was crocked in a 50-50 duel just six minutes after coming on. It was that kind of day.