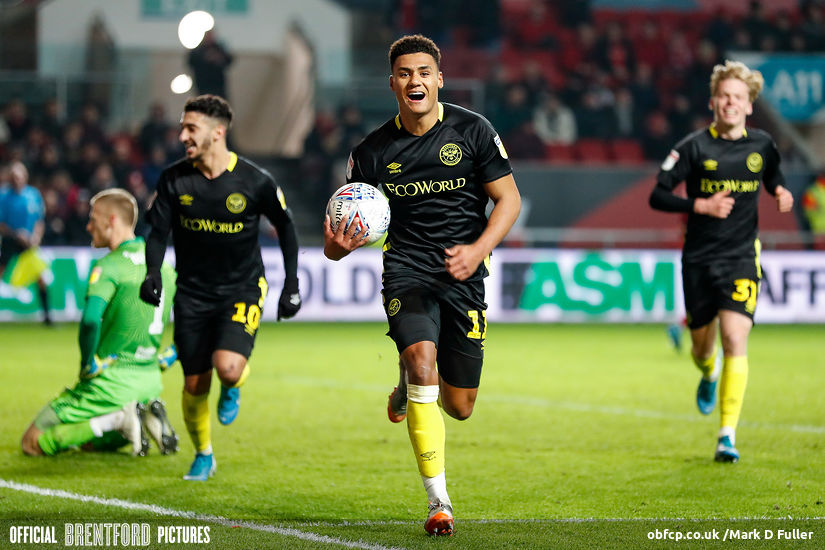 Stewart Purvis was at Ashton Gate to see the Bees bounce back with a win that takes them into third place.
Share |

Said Benrahma, OIlie Watkins and Jan Zamburek celebrate the Bees fourth goal. Daniel Bentley doesn’t.
On the cover of the Bristol City programme was a picture of former Brentford keeper Daniel Bentley plus the headline ‘In Safe Hands’. Bentley- voted by Bees fans this week as one of their team of the decade- needed those hands to pick four goals out of the back of his net.

One further ironic touch was that it was current Bees keeper David Raya (maybe last week’s fluff at Millwall cost him some votes in that poll)  who helped create the first goal after five minutes of the EFL calendar year. Kicking from just outside his box he found Ollie Watkins out on the left who cut inside and after some pinballing around Bryan Mbeumo stepped forward to lift it over City defenders into the net.

Then came two crucial incidents, also involving Watkins. He and City centre back Ashley Williams had a dust up for which they both collected yellow cards. At one moment they seemed locked in a Greco-Roman Wrestling hold. Two minutes later Watkins was through on goal when a despairing tackle by Williams brought him down on the edge of the box. Denying a goal scoring opportunity meant a straight red for the Welsh international. City Head Coach Lee Johnson decided not to bring on a specialist centre-back to replace Williams and made do with what he already had on the pitch.Immediately Brentford took control with Christian Norgaard setting the calm and collected tone, Ethan Pinnock making some great long diagonals (eat your heart out Yoann Barbet) and Mads Roerslev standing in safely for a resting Henrik Dalsgaard. Mads even put a good cross into the box but nobody could connect.

Bristol then paid the price for that makeshift defence. Mathias Jensen had a shot beaten down by Bentley but it fell to Watkins who squared it for Said Benrahma to put the Bees two up. The Algerian ran across to Thomas Frank for a giant man-hug to celebrate.

Belatedly Lee Johnson brought on Taylor Moore to stiffen his central defence. He sacrificed a mid-fielder,Niclas Eliasson, a favourite with the home crowd who made their views about his departure very clear. At the other end Raya made a good save which prompted the away fans behind him to break into ‘There’s only one David Raya’ and ‘Bentley,Bentley what’s the score’.

Seven minutes into the second half Ollie Watkins missed a chance which at the time felt like one Brentford might regret. Put through one-on-one with Bentley by a stray defensive backpass he failed to see Mbeumo steaming up alongside him in the clear and Bristol stifled Watkins’s shot. Sensing they were still in with a chance City’s ten men began to battle. There were yellow cards for City’s Jay Dasilva (brother of Brentford B defender Cole Dasilva but not related to Josh Dasilva) and Andreas Weimann. Rico Henry got one for bringing down Marley Watkins of City. Trivia points for those who noticed there was a Watkins and a Dasilva on each side.

With half an hour to go It looked like another siege of Brentford’s goal was possible with City’s Famara Diedhiou most likely to lead the charge. But the tide turned for the Bees, the substitution of Kamo Mokotjo for Josh Dasilva helped and there were two more substitutions. The player variously known as Emiliano or Marcondes and sometimes both had only been cleared for a place on the Bees bench when the necessary international clearances went through at the last minute. In truth his introduction didn’t make much difference but it gave the Bees fans the chance to reprise their ‘Emiliano’ song.

The other sub, Jan Zamburek, made a bigger impact with his very first involvement, a cross for Watkins to blast past Bentley. The move was started by Benrahma who over the 90 minutes played more of a team role than of late but towards the end as Brentford began to cruise to success he couldn’t resist his favourite double-footed flick over the defender’s head.

The visitors fourth came after Roerslev put over a great cross which Watkins headed straight at Bentley but those famous hands couldn’t control it and Watkins drilled the ball home right in front of the away fans. ‘The Bees are going up’ rang out from the assembled 1,027.

Bad sport award of the day went to Lee Johnson who at the final whistle chose to pick a row with Thomas Frank  for which he was ‘sent off’. Brentford’s Head Coach was not going to have his day spoiled and headed off to celebrate with his players at the away end. He was pleased not only because his BMW ( Benrahma, Mbeumo and Watkins) had all scored but that two graduates from the B team, Zamburek and Roerslev, had both got assists.

7 holiday period points out of a possible 12 (with only one home game among the fixtures) is a total most fans will settle for. With WBA and Leeds drawing the gap is narrowing a bit between the automatic places and the play off zone and Brentford’s goal difference, now up to +21, could be important at the end of the season.