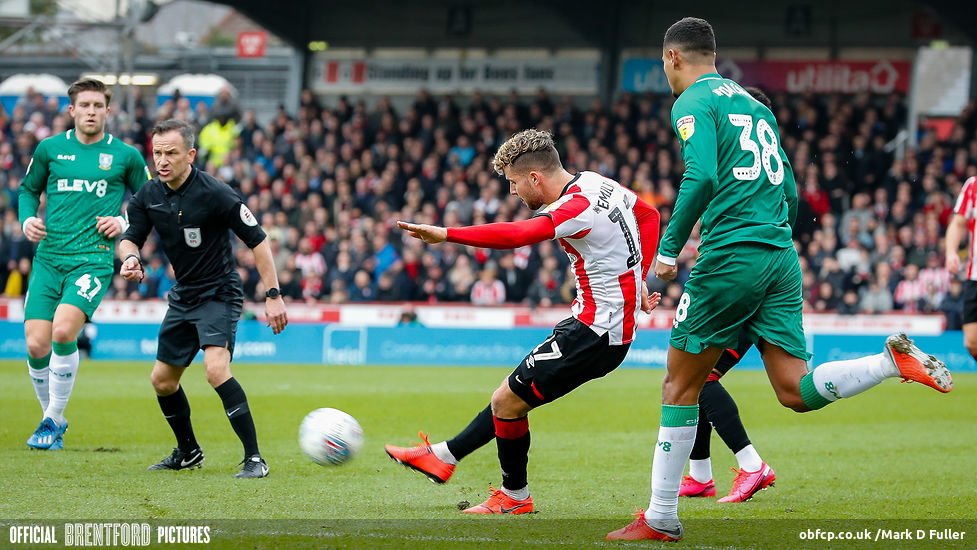 Just one win and three draws in Brentford’s last four outings needed something special to eradicate them from the memories of the faithful. Five immaculate goals to despatch an admittedly lacklustre Wednesday can be considered job done, even if star striker Ollie Watkins – the EFL London player of the year – remarkably failed to feature on a scoresheet that showed the club regain its position as the division’s leading scorer.

Fulham, four points ahead and due to entertain the Bees next Friday, and West Brom, in second place and visitors to Griffin Park the following Tuesday, have been given food for thought that might develop into severe indigestion if the results go against them. Oh, how delicious.

Here was a game in which not one member of the home team could be criticised for (a) lack of effort or (b) sloppy passing in defence or attack. The tone of the afternoon was set after five minutes, when a Henrik Norgaard rush culminated in Watkins clipping the crossbar with keeper Cameron Dawson beaten. Dawson looked glum, but would look even glummer as the game progressed.

A crowd of 12,270 – depleted somewhat in its later stages as some of the visiting fans departed early, probably in need of a stiff drink – did not have a long wait for Brentford’s superiority to be confirmed. The Wednesday rearguard was in sixes and sevens bordering on nines and tens as Josh Dasilva, recapturing the form that saw him score a hat-trick at home to Luton, drilled a shot through the careering bodies and then between Dawson’s legs,

Nine minutes gone and after another eight Emiliano Marcondes doubled Brentford’s advantage with the sweetest of curled shots, which appeared to increase the distance between it and Dawson with every yard covered on its way into the net.

With first-half possession recorded at 80 per cent, it came as no surprise that with five minutes of it left the treble was achieved. Bryan Mbeumo, who had been having a quiet time of late, livened only by a stunning free kick last weekend, latched on to a ball travelling at speed and ran with it before slotting a fierce shot beyond Dawson’s reach.

The Owls, surprisingly unaccompanied by derisory hoots from the home crowd, regrouped after the interval and David Raya was kept mildly busy until a dazzling run by Said Benrahma ended with a defence-splitting pass to Dasilva, whose turn and perfectly-placed shot deserved a round of applause, although poor Dawson could have been forgiven for not wanting to join the hand-clapping.

Astute substitutions by Thomas Frank, designed primarily to give the recently signed Oxfordian duo further Championship experience, paid off handsomely some nine minutes from time. Tariqe Fosu-Henry, hereafter to be known as Fosu, had been on the pitch only a few minutes before beautifully directing a shot inside the far post to score his first goal for the Bees.

Mention must be made of Benrahma, who dazzled to deceive and frequently left the visiting defence running here, there and everywhere, but rarely anywhere near the space the Brentford number ten was occupying. If he could only resist the impulse when beating a man to go back and beat him all over again, he’ll be the hottest property in the division.

Although perhaps not. He may not have added to his twenty-one goals, but Watkins is a pleasure to watch as he gains authority with every game. ‘Ollie Watkins is the best,’ the crowd sang lustily – and they may be right.

Prior to kick-off, the teams dispensed with the usual handshake – any lurking coronavirus would make such gentlemanly acknowledgement a very bad idea indeed. Very sensible, but what about any collision on the pitch where flesh met flesh? Or handball, or a header? ‘Heavens,’ said my mate Charlie, ‘who’d have thought the beautiful game could be such a health hazard.’