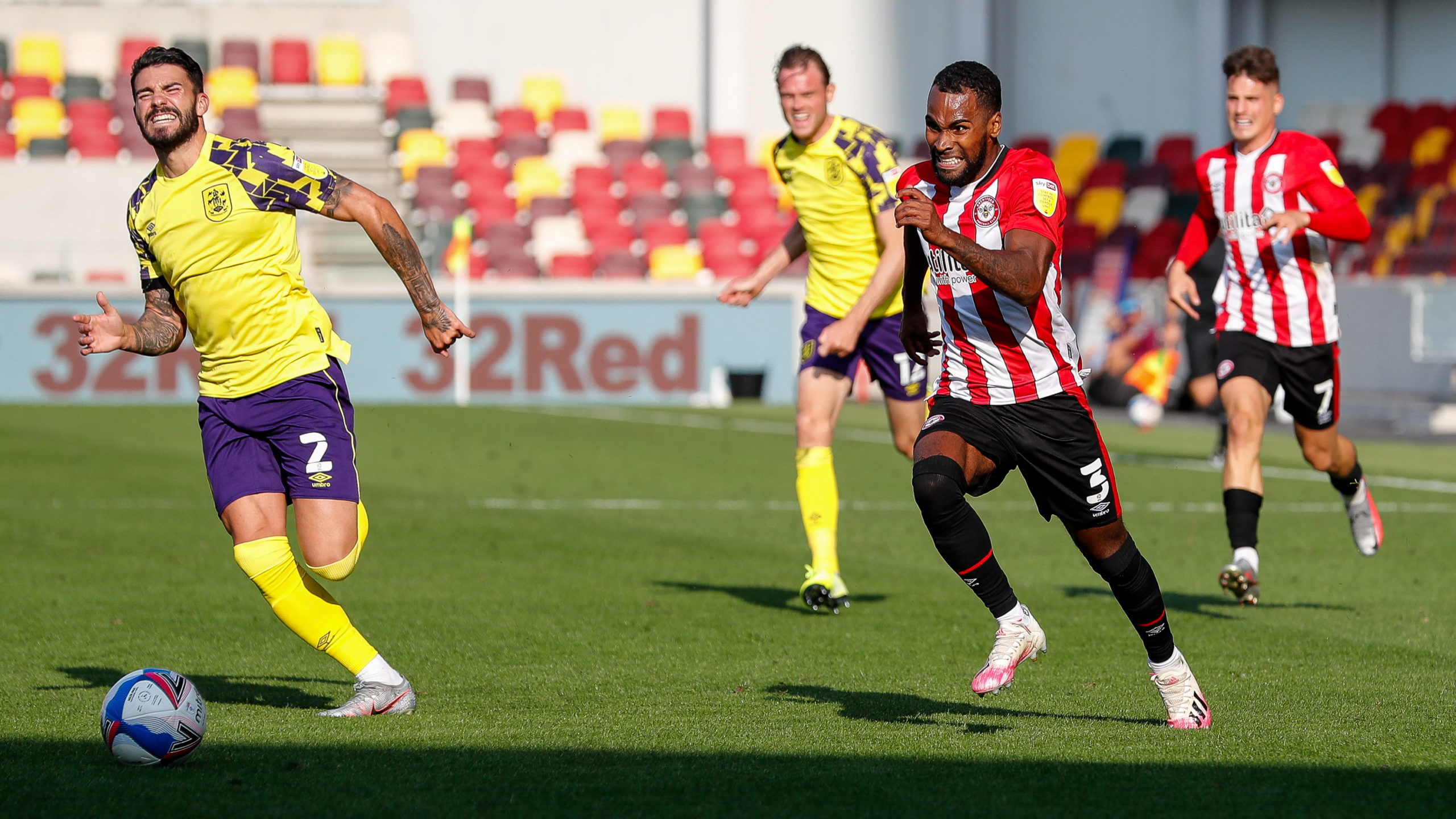 A trademark Rico Henry run launches the first Brentford victory at the new Brentford stadium. Stewart Purvis was there.
Share |

For the Carabao Cup victory at Southampton Thomas Frank had started with, amongst others, Marcus Forss, Shandon Baptiste and Tariqe Fosu. For this, the first league match in our new stadium, he brought all three on as subs (for Ivan Toney, Emiliano Marcondes and Sergi Canos) and while they were on the pitch two of three Brentford’s goals were scored. So Brentford’s Head Coach has some intriguing options for the two games this coming week, away at WBA in the Cup and away at Millwall in the Championship, as he works out his best starting side.

For this game which Peter Gilham called ‘the start of a whole new era’ Luke Daniels kept his place in goal with David Raya on the bench. For Huddersfield Alex Pritchard was on the pitch and in the stands was another returner to Brentford, former Bees CEO Mark Devlin now with the Terriers, getting his first look inside the stadium that was talked about so much during his stint at Griffin Park. Having disposed of the Cowley brothers Huddersfield’s new head coach is Carlos Corberan, who was Marcelo Bielsa’s interpreter and shouter-in-chief at Leeds while the man himself watched from his upturned bucket.

The story of the first half was whether Ivan Toney was going to get his first goal for Brentford in his third start. After 15 minutes some good interplay with Josh Dasilva put him through on goal but keeper Ben Hamer, last seen watching Said Benrahma’s worldie go round him at Derby, managed to scramble it away. Another fifteen minutes later came a much clearer chance for Toney -so clear you wondered if he was offside- but he shot wide. Huddersfield had a few chances, hitting the woodwork after a smart free kick move but they were also picking up injuries and two players had to be subbed in the first half. Christian Norgaard picked up his second yellow card this season.

As Brentford prepared for a corner just before half time Kev O’Connor was heard shouting  a code name for a move’. When the corner went long to Ethan Pinnock in his customary position in mid-air by the far post it became clear we may well see and hear a lot more of those calls this season.

Coming up to the hour mark with Pinnock having delivered some fine defensive work to prevent a goal, some uncomfortable possibilities were beginning to loom into sight. Would this be a ‘deja vu all over again’, a repeat of last year’s home game where one Huddersfield strike was enough to take the points. Could it be that Brentford would not win within 90 minutes in any of their first three games at the new stadium, thus setting up a ‘curse of the new stadium’ narrative.

Which is when Rico Henry came to the rescue. Starting from mid-way down the left in his own half he began a run. He laid it off to Sergi Canos who cleverly slipped it though the legs of his marker and into the path of Rico who was screaming for the return ball and galloping down the left as only he can. He took it to the edge of the box before moving it inside to Josh Dasilva who was in plenty of space. Just as he had at Southampton last week he sent the ball straight into the corner of the net for this the first league goal at the new stadium.

Around the 70th minute came two substations -Forss for Toney and Fosu for Canos . The momentum picked up further. Bryan Mbeumo created the next goal when he refused to give up inside a crowded box and slipped it to Forss who had stood back from the melee to create space.Then Mbeumo himself hit one of those left foot rockets into the corner of the net.

‘What a great goal’ shouted Brentford owner Matthew Benham from his seat in the stand. Who would disagree with him?