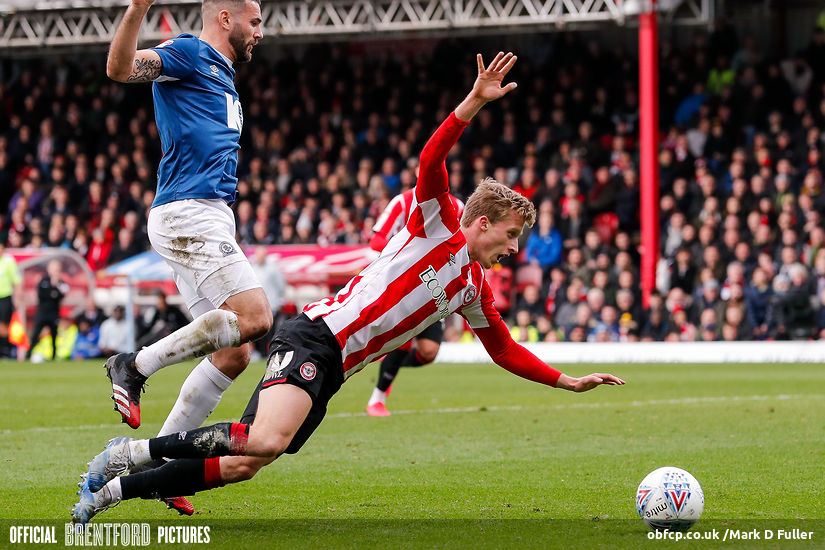 Having outplayed the visitors for much of the first half, the Bees trudged off at the interval a goal down and probably singing under their collective breath a snatch of Randy Newman’s ‘Lonely at the top’: ‘All the applause. All the parades… But it’s just a crazy game.’ Crazy it certainly was, with Blackburn on their way to a severe drubbing until Ethan Pinnock misjudged the flight of a speculative punt from goalkeeper Christian Walton, allowing striker Adam Armstrong to lob neatly over David Raya.

The Bees resumed where they had only just left off, peppering the opposition with shots that were ballooned over the bar, ricocheted around the visitor’s penalty area like a pinball or sped wide of the posts like a wayward Guy Fawkes Night rocket. Rovers bungled one other chance and home fans were allowed the consolation of looking up the possession statistic that showed Brentford so far in front that they might soon win the ball outright. We’ll get a goal soon, won’t we? Well, no, as a matter of fact.

Nine minutes into the second period a skirmish in the Brentford area ended with referee Tim Robinson judging Raya to have fouled John Buckley when attempting to reclaim a ball that had slipped from his grasp. Harsh maybe but, hardly surprisingly, Armstrong gracefully accepted the invitation to score his second, competently from the spot.  Whereupon Brentford suddenly showed signs of falling apart. With Rovers muscling their way into a game in which they had showed all the signs of being destined to finish second, the home strike force went from the finely-tuned BMW to second-hand Ford Fiesta, while the defence wobbled like a jelly on a plate.

In no game since skipper Pontus Jansson was sidelined through injury has his absence been so noticeable. Pinnock and Julian Jeanvier, struggling in the heart of the defence, more and more appeared like lonely souls (‘You’d think I’d be happy but I’m not’ – R Newman), unsure what to do other than deliver a short pass of dubious quality to someone else with a similar lack of ideas. Even stand-in captain Henrik Dalsgaard, usually so impeccable, delivered a back-pass so pathetic that he clasped hands to head as Raya somehow reached the ball and save the catastrophe of going further behind while simultaneously doubtless wishing he hadn’t left Blackburn for West London last July.

A game-changer became imperative if embarrassment was to be avoided and it came just after an hour’s play. A long ball deep into Rovers’ half from Dalsgaard was captured by an under-pressure Ollie Watkins and a fluid turn and immediate volley saw him score his twenty-first goal of the season, one of such quality it brought a tear to many an eye.

And, with substitutes in place or about to be so, Brentford resumed the bombardment seen earlier on, to little avail until Mads Roerslev, having replaced Jeanvier, bustled and bruised his way into the Blackburn area before being up-ended by a defence now verging on panic. Said Benrahma, whose finishing had fluctuated from unlucky to woeful until then, slotted home the penalty, leaving a little under twenty minutes for the home side to batter the visiting defence in search of that much-required three-pointer.

An electric afternoon and a fair result, said those of generous spirit, and one that showed the validity of the motto on Blackburn’s club crest – Arte et Labore (Skill and Labour) – is no idle boast.

‘Lots of the second,’ sniffed my mate Charlie.