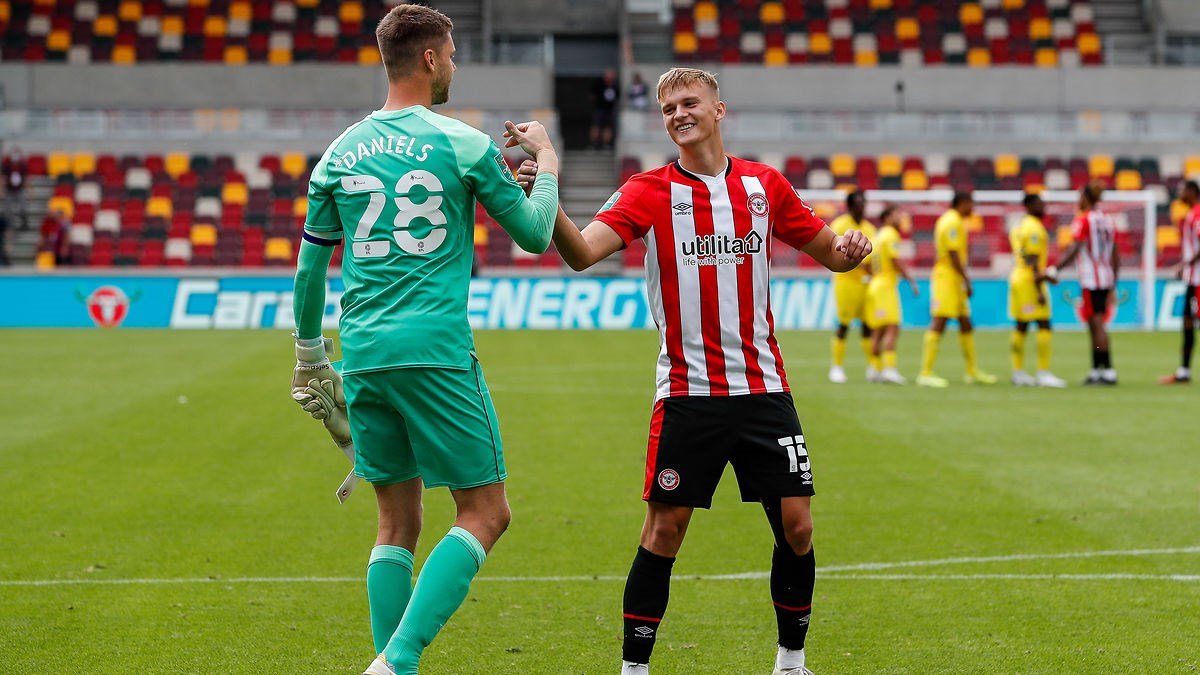 The first competitive game at Brentford’s new stadium was another ‘behind closed doors’ match. Donald Kerr was one of the club directors allowed to attend.
Share |

The overwhelming sense among those who were able to attend today was that it wasn’t supposed to be like this. A fantastic new stadium, a team full of players eager to impress the manager in the enforced absence of those on international duty or in that horrible transfer window limbo, and opposition still full of their success last season, but no spectators. It was bad enough at Griffin Park but the awareness of what our fans were missing was only intensified in such glorious surroundings. But, with that context, we kicked off with every expectation that, even with a few key players missing, we should have enough to win this game.
We’ve had a fairly poor time in the early rounds of the Carabao Cup in recent years but it is always a chance to see how those on the fringe of the first eleven are developing. A step up from pre-season friendlies but very much the last step before the serious stuff starts next week. Of those in the squad, most interest was probably in the new striker, Ivan Toney, but with Charlie Goode partnering Ethan, and Dominic Thompson’s inclusion forcing Rico to move to a less natural side,  it might also be a test for the back division.  Jan Zamburek has done enough in his cameo performances last season to deserve a start, but there was some apprehension that while the midfield would be technically superior to any opposition, it might lack the physical strength of Christian and Josh da Silva. And, of course, the bench had to include a couple of the newer B team recruits, with Paris Maghoma and Fin Stevens stepping up. It must be very encouraging for these younger players, particularly Fin perhaps, to move so quickly, in his case from non league football, to inclusion in a first team squad.
To the game itself, it followed the pattern that one might expect, with Brentford dominating possession, not perhaps with the confidence or fluidity of the latter stages of last season, and Wycombe being strong and well organised in defence, and favouring the long ball to the very competitive and combative Parker up front. We might have moved the ball more quickly than we did, and although we created a few early chances, we often didn’t make the best decision in the last third. However there was no doubt as to the better side throughout this half, and some of the balls being sprayed from one side of the pitch to the other were marvellous and forced Wycombe to keep on their guard. Sergi was a constant threat and followed up his impressive performances in pre season with another strong ninety minutes today. Dominic Thompson looked comfortable and seems to be improving with each exposure to first team football, and, on the other side, Rico showed no signs of discomfort in that unaccustomed role. All three of the central midfield trio showed glimpses of their huge ability but Wycombe pressed them closely, too closely on a number of occasions, and snuffed out all but a few dangerous moments. Ivan Toney has not played competitive football since March but, on this showing, he promised much, even if nothing quite came off for him. He seems a bigger physical presence than Ollie, and he was almost as active and effective in our own box defending set pieces as in the opposition’s.
The opening goal, when it came on 32 minutes was the result of yet another tackle by the industrious defence, but this time being penalised by the referee, much to the disgust of the perpetrator. He must have been even more upset when Jensen floated a beautiful cross to the far post where it was met by Ethan, who headed it strongly into the net off the near post. It was no more than we deserved and it seemed to take the pressure off all round. For the rest of the half, Brentford had a few more chances on goal as a result of quicker passing movements whereas all Wycombe’s chances, one in particular forcing a good save from Luke Daniels, were from set plays. The stats at the end of the game suggested that all four of Wycombe’s shots on goal came in the last twenty minutes but the impression of those watching was that Parker was a threat throughout the first hour and came close a couple of times in the first half.
The home team emerged from the break as if rejuvenated and quickly forced Wycombe on to the back foot. It seemed as if Thomas had encouraged them to be even more positive than in the first 45, and to move the ball more quickly. And then, perhaps as a result of this more energetic start, Gape made a hurried challenge on Jan Zamburek, and the referee had produced the red card so quickly it took many of us by surprise. Those watching on TV had the advantage over the attendees of several replays and, while there may not have been any malice in the tackle, the player certainly seemed to go over the ball and caught Jan badly on the ankle. The big screen showed the game throughout but we were spared any contentious incidents and so had to take it on trust that the red card was deserved. The small Wycombe contingent were inevitably unconvinced.

So we settled down to the rest of the half, a full 40 minutes of it, with the full expectation of more home goals. Surely, given our dominance of possession so far, we could manage the game out. And we did create more chances, the best of which was an effort by Sergi, cutting inside from the left wing and curling a fabulous shot which shaved the outside of the far post, reminiscent of Said’s great goal against Derby in the run in. Ivan continued to harry the defence and Jensen and Emiliano, until his substitution on 72minutes by Shandon Baptiste forced Wycombe to chase the ball all over the pitch. And then a calamitous mistake, only a minute after that substitution saw Wycombe equalise. The error came from the most unexpected source, as Ethan didn’t put enough force into a pass across the penalty box,  Kashket seized on it and set up Horgan for a shot high into the net. This seemed to unsettle the hitherto confident Bees, notwithstanding their slightly lacklustre performance after the early fast start to the second half. And Wycombe would have doubled their tally were it not for a good save by Luke Daniels. More subs were made by both sides, Marcus Forss coming on for Tariq, and Joel Valencia for Dominic, but to no avail. The addition of three minutes by the referee seemed rather at odds with the number of subs and a couple of injuries, as well as some frustrating slow play by the opposition goalkeeper, but I don’t think any of us were persuaded that a few moments more would change the score.
We don’t make it easy for ourselves, and even when Wycombe missed their penalty, Jensen, who was later awarded man of the match by Sky contrived to hit the back row of the East Stand with his effort. However, a save by the excellent captain for the day, Luke Daniels, and a powerful drive from Marcus sealed the win eventually. We had won our first competitive game at our new home and we can now welcome back our international travellers and approach next Saturday with more wind in our sails. This performance was not one of our best but it suggested that those waiting in the wings are stronger than in previous seasons and that we’re in for another exciting ride.