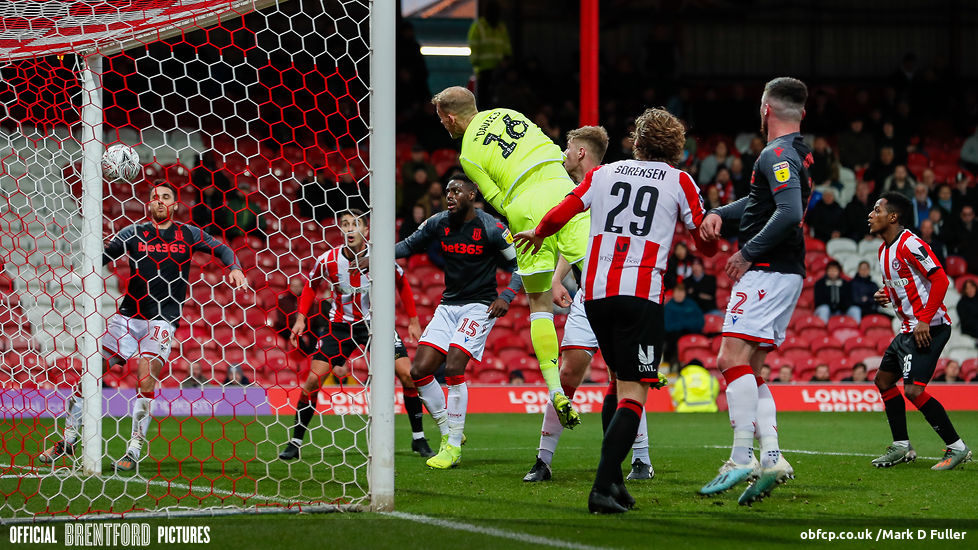 Stewart Purvis was at Griffin Park for a third round FA cup game decided by one special goal.
Share |

Two years and three days after he joined Brentford, Emiliano Marcondes Camargo Hansen (let’s just call him Marcondes) finally scored his first goal in a competitive game. It was enough to put Brentford into the next round of the FA Cup. In keeping with his on-off, stop-start, frustrating career with the Bees the goal came towards the end of a first-half when he alternated between skilful playmaker and wasteful distributor. Brentford won a free kick after Dominic Thompson made a good run down the left and was clattered by Stoke’s Tyrese Campbell. Brentford got a free kick, Campbell got a yellow card. ‘Don’t let Marcondes take the free kick’ said the Bees fan sitting next to me and around him wise heads nodded in agreement. Up stepped Jan Zamburek to take the kick, or so it seemed until he dummied and instead Marcondes delivered the ball into the far corner of the net with goalkeeper Adam Davies deceived by the swing and the arc of the loop. ‘Emiliano’ sang the Ealing Road faithful. The man himself said he was really happy to see the ball cross the line, ’I’ve been waiting a long time’.

Until the goal Stoke had the majority of the play and the chances. City fielded a team which Thomas Frank calculated had spent 9,000 minutes on a Championship pitch this season compared to the 2,000 which his team had clocked up. And that stat summed up the first half as Stoke looked the stronger and the more experienced. Brentford were playing three centre-backs Ethan Pinnock, Luka Racic and Mads Bech Sorensen plus wing-backs Mads Roerslev and Dominic Thompson. The formation took time to settle down, especially on Brentford’s right where Stoke’s Tom Ince was finding space between the defenders. But as the game progressed the five became Brentford’s key strength with Pinnock outstanding. Up front instead of BMW (Benrahma, Watkins and Mbeumo) we had VDZ (Valencia, Dervisoglu and Zamburek) which definitely doesn’t have the same ring. Halil Dervisoglu, newly arrived from Sparta Rotterdam, was having a quiet start in his first game, learning just how tough Championship defenders can be . Of the others in that 2,000 Minute Club of rare starters, Dru Yearwood was showing all the power which convinced Brentford’s Directors of Football to buy him from Southend. They’ve waited as he’s taken time to get up to full fitness but now they know that when the Bees need to bring on a ball winner in midfield he will be a candidate. Fans of a certain generation may have noticed a resemblance to Terry Hurlock, every tackle was a matter of life and death.

In the second half Stoke again started the stronger and on 60 minutes brought on the experienced Sam Vokes to lead the attack. Maybe Stoke boss Michael O’Neill was saying ’this is all very well giving the fringe of my squad more playing time, but I need to win a game’. Vokes tested the Bees defence but Pinnock ruled in the air and keeper Luke Daniels, captain for the day and a new contract under his belt, was faultless.

In the Stoke midfield Ryan Woods was reliving all those Griffin Park days and nights when he brought the ball out of defence so efficiently that rival fans clamoured for their clubs to buy him. Now he’s mostly out of favour at the one who did, where that other ‘Ginger Pirlo’ Sam Clucas is preferred. In one bizarre moment Woods collided with referee Keith Stroud and that let Dru Yearwood through but the ball ended up in the Ealing Road stand which avoided Mr Stroud having to make a controversial decision either way. Both sides were now making more chances, some of Brentford’s were made by Dervisoglu who was learning how to go round large English defenders and one curling shot went just wide.

When two teams turn up with so many lesser-known players and send on subs which only the most faithful of fans will have heard of it can be difficult for a crowd to get involved. But credit to the Griffin Park crowd they got behind their team as the Bees defence saw off waves of Stoke crosses aimed at Vokes’s head. Pinnock got in a crucial block, Luke Daniels picked up a yellow card for time-wasting , but more importantly they saw out the game with a clean sheet. After the game Thomas Frank said the victory over a more experienced team ‘said everything about the Brentford model, and said everything about the B team’. There had been six past or present B team players on the pitch.

This was the day Brentford remembered Bees season-ticket holder Joe Finnis, one of the British Airways crew killed in car crash near Heathrow. It was also a day to remember how the inspirational work of the late Rob Rowan in creating the B team gave players with an average age of twenty a taste of first team action on an FA Cup day,